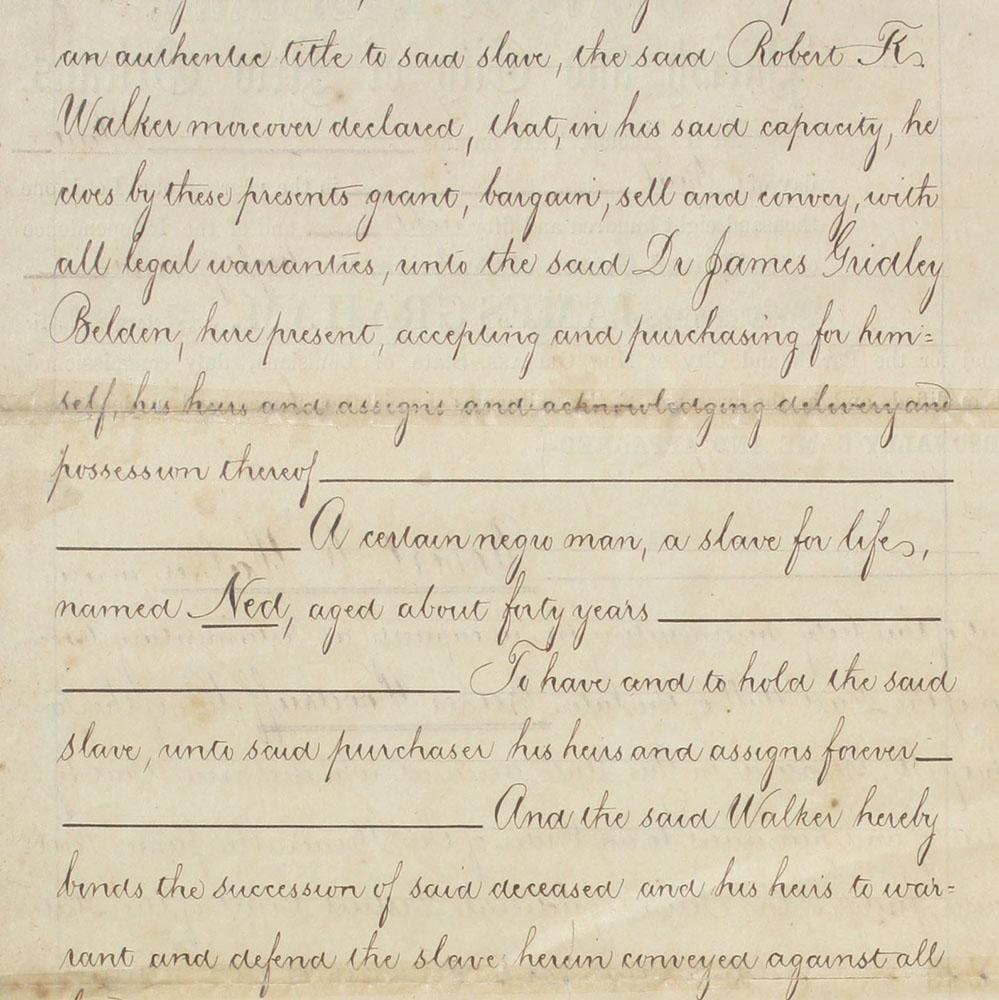 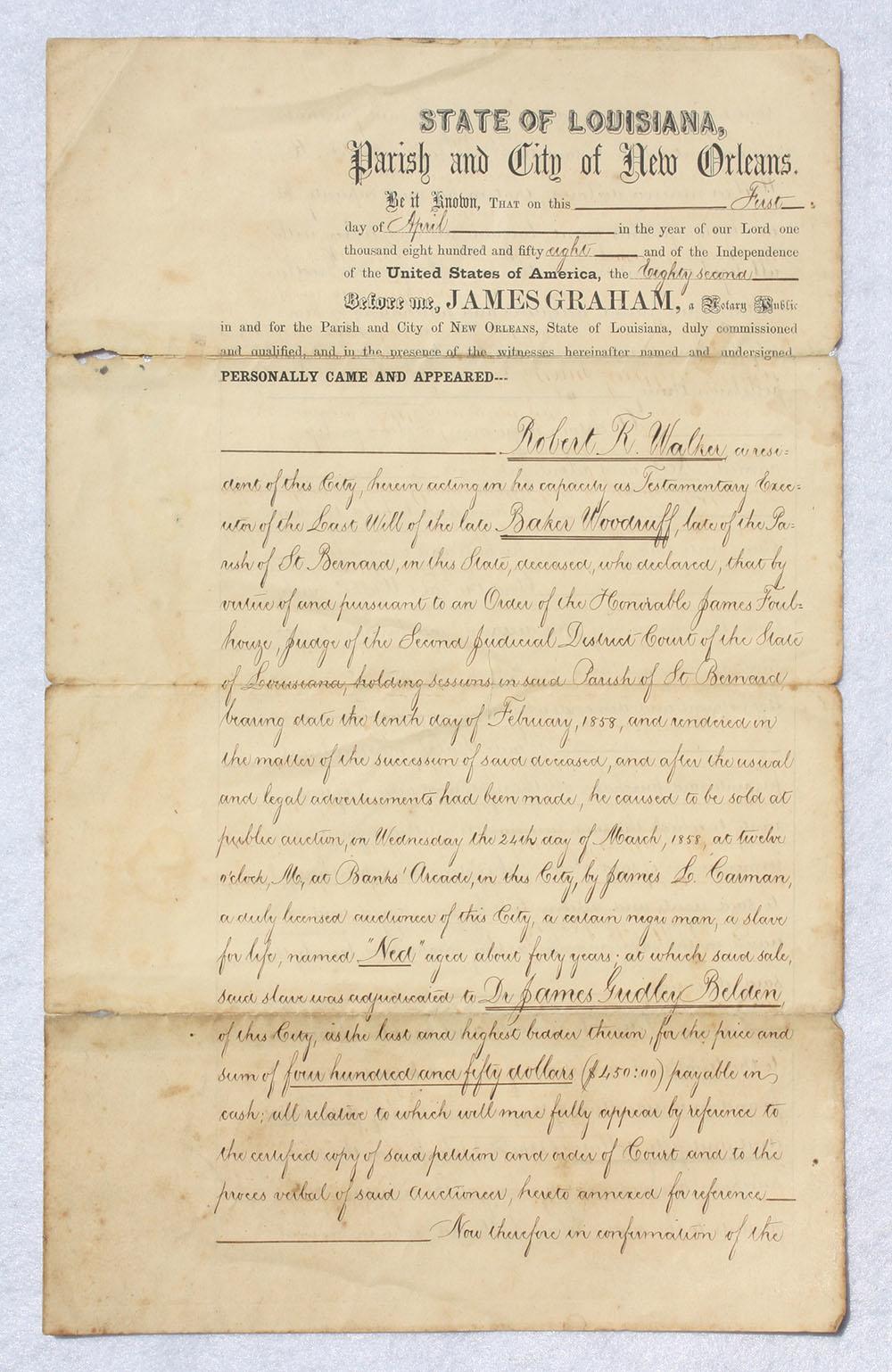 Sale of Slave by Suc[cessors] of Woodruff to Dr. James G. Belden, dated 1 April 1858. Holograph manuscript on printed form folded to make 4 pages.  A true copy, signed by Notary Public James Graham with his blindstamp seal.  Creased, soiling to the fold bearing the title on the final page, with some insect damage not affecting the text.

Baker Woodruff (1795? – 1857) owned a large sugar plantation in the Parish of St. Bernard.  His will, prepared on 22 February 1855, stipulated that “as soon as possible after my decease, I wish all my negroes freed … and sent to Pennsylvania, and bread and meat found them for one year, all at the expense of my estate.”[1]  The will specified by name the sixty-two individual slaves to be freed. When he died in May 1857, his executor Robert K. Walker, a cotton merchant in New Orleans, applied to the court for authorization to carry out Woodruff’s orders and wrote to the mayor of Pittsburg to confirm that the state had no law that would prevent the immigration.

Woodruff’s intentions were widely celebrated. “Conscience is at work in the South,” crowed one anti-slavery newspaper.[2] But not everyone agreed. “We presume he argued all his life long that the negros [sic] were better off in slavery,” sniffed the Springfield (Mass) Republican. “How singular it is that so many masters curse their slaves with liberty on their death-beds.” The Charlestown Daily Courier expressed gratitude that “the number of such masters are not very ‘many,’ and … growing less and less every day, as the principles upon which rest the system of African Slavery become better understood.”[3]

At any rate, celebrations were premature. Woodruff’s heirs sued to block emancipation. The basis for the heirs’ objection was a state law signed on 6 March 1857, several months before Woodruff’s death, prohibiting the emancipation of slaves. Thus, the heirs argued, the stipulations in the will relating to manumission “are contrary to the laws of the state of Louisiana, and to public policy, and are absolutely null and void.”[4]

The case was argued before the District Court of the Parish of St. Bernard, which found for the heirs on 10 February 1858.  Walker appealed the decision to the Louisiana Supreme Court, but in April 1859, the Court affirmed the judgment, with costs. “It is unnecessary,” the Court added, “to express any opinion upon the right of a testator under our present law to authorize his executor to remove his slaves to another State for the purpose of emancipating them.” Referencing this case, abolitionist George B. Cheever observed that “the slave jurisprudence of our country proceeds to an extreme that never disgraced any other.”[5]

By order of the District Court, Walker was compelled to liquidate the bulk of the estate in a timely manner. So on 24 March 1858, Woodruff’s plantation, comprising 1680 acres including 200 acres under cultivation, and including buildings, tools, and livestock, was sold at auction.  Also auctioned were 800 barrels of corn, 40 barrels of sweet potatoes, a gold watch, a spyglass, household furniture, and two men, Ned, aged about 40 and John, aged about 35.[6]

The present document records the sad denouement of this landmark case. Signed by James Graham, the Notary Public for the Parish and City of New Orleans, this records at length the sale "a certain negro [sic] man, a slave for life, named Ned, aged about 40 years." The buyer was Dr. James G. Belden, a homeopath, and a prominent figure in the social and professional world of New Orleans. A native of western New York who moved to New Orleans in 1847, Belden was a nephew of Noah Webster. He served as state treasurer of Lousiania in 1864. He bought Ned for $450.[7]

An important and moving record of this painful moment in the history of slavery in Louisiana.

[6] Times-Picayune 12 March 1858, p. 3. Presumably the rest of the slaves were kept on the plantation as Walker mounted his appeal to the supreme court.