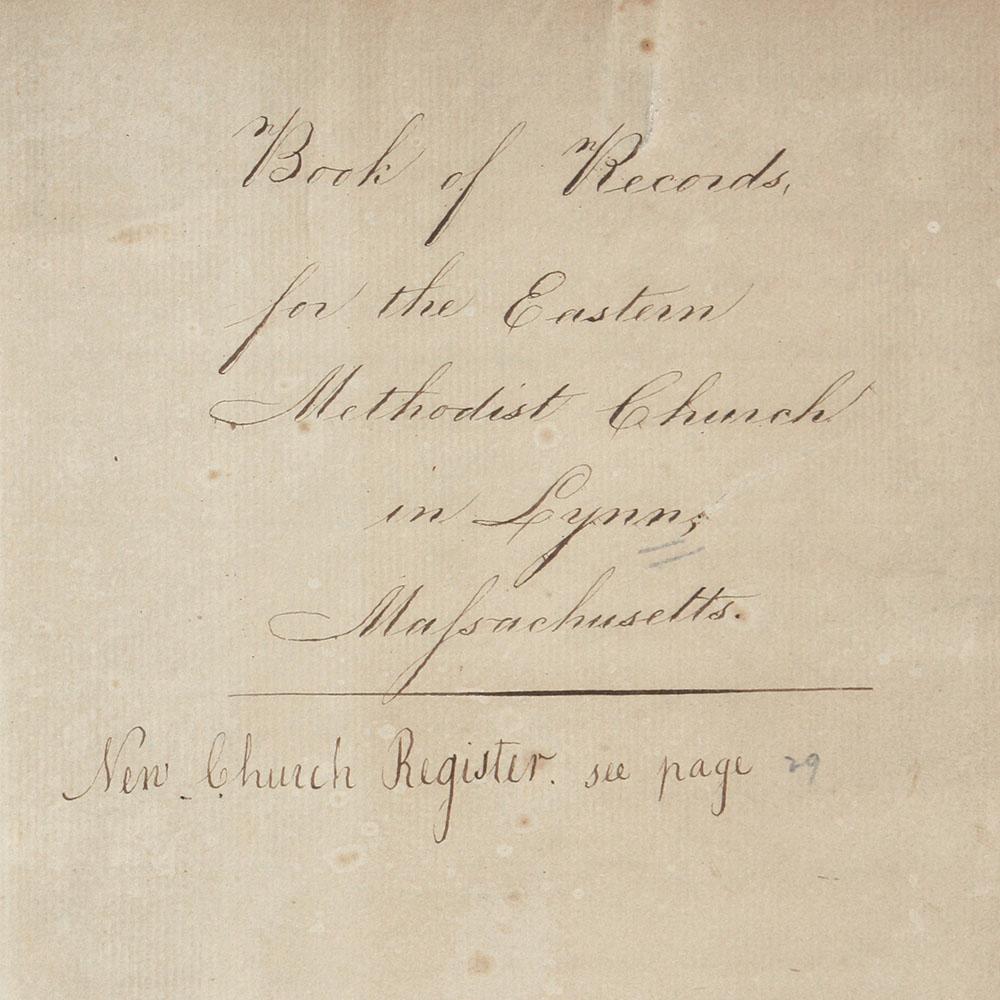 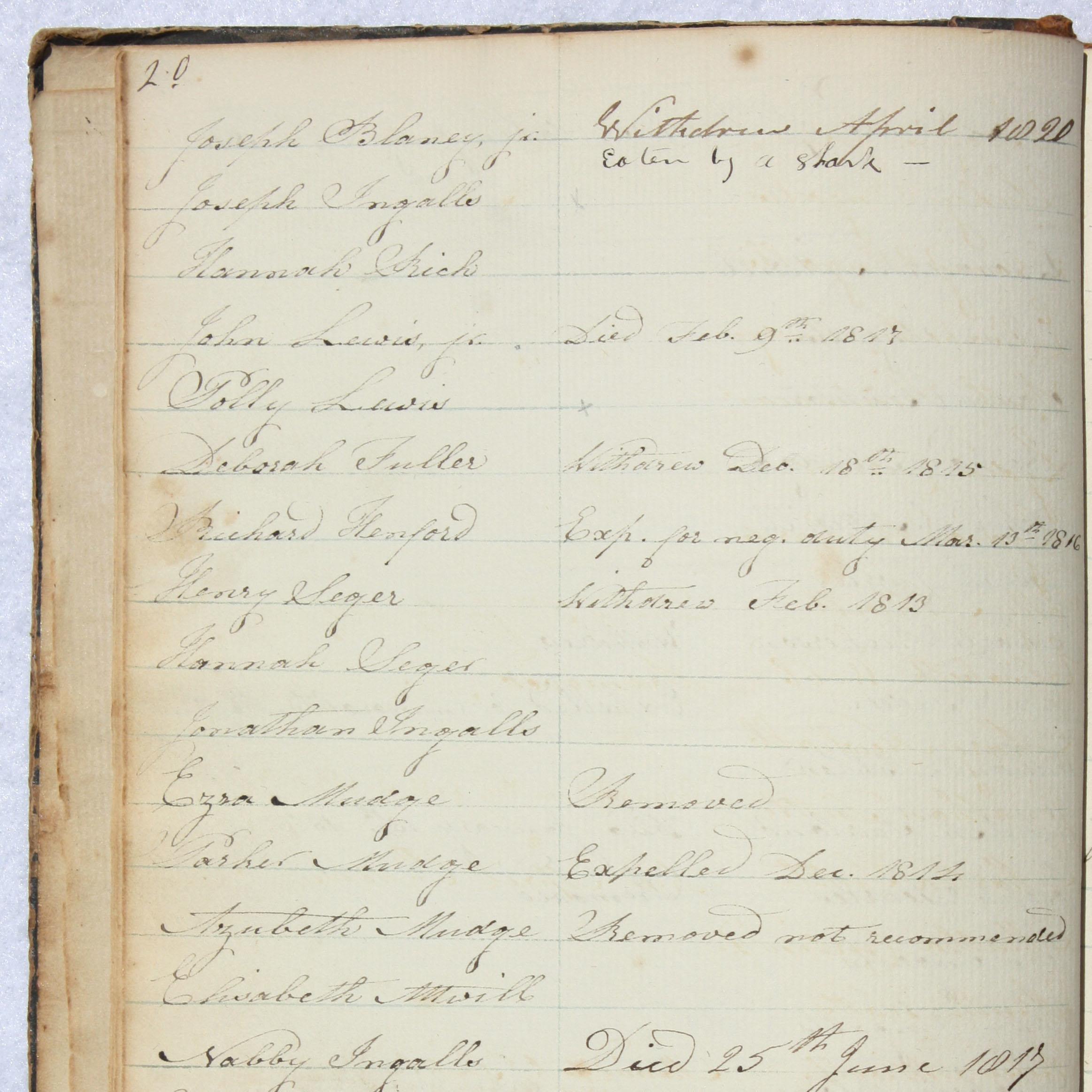 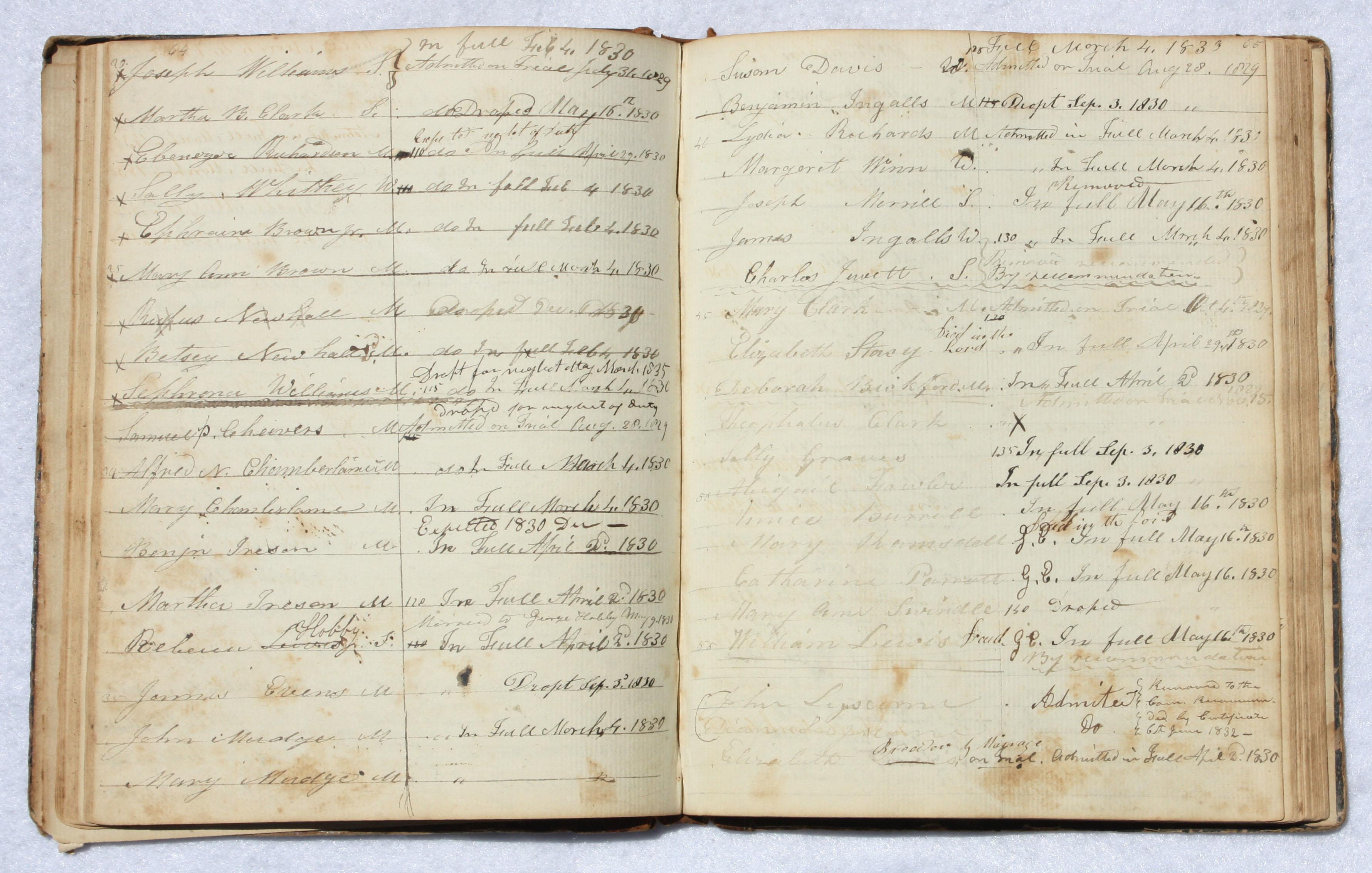 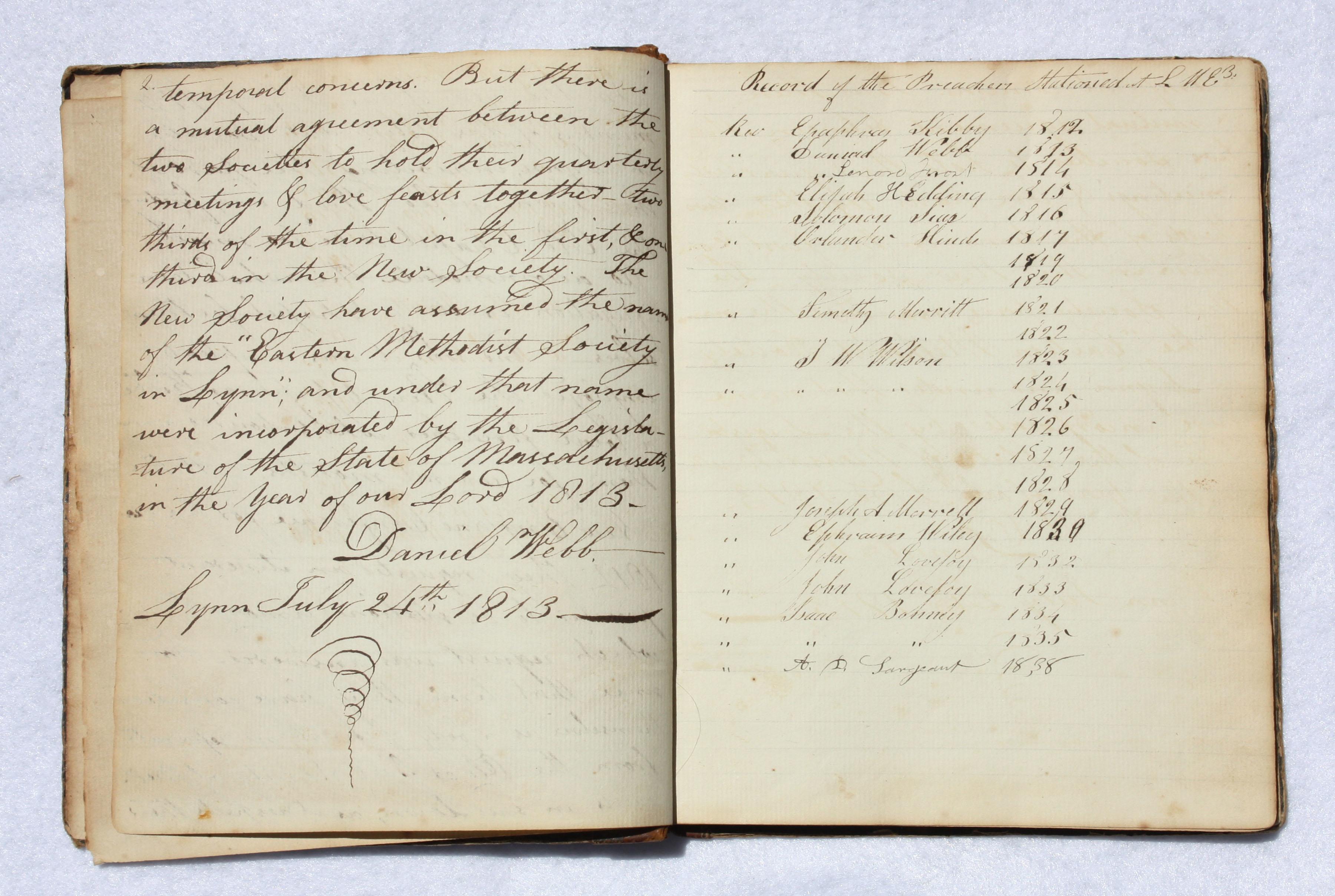 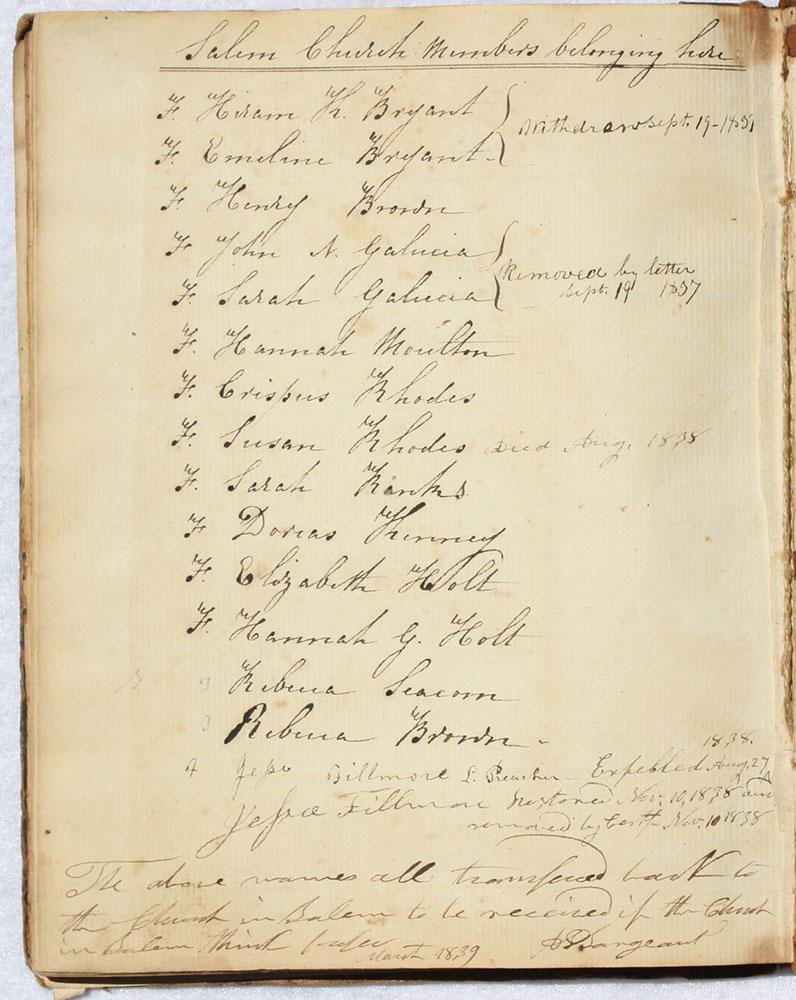 The original handwritten register of the Eastern Methodist Episcopal Church of Lynn, Massachusetts, later renamed St. Paul’s. The volume records details of membership from the founding of the church in 1811 through 1840, covering that period of spiritual and social ferment known as the Second Great Awakening. In addition to offering a rich resource for historical and genealogical data, the register also documents one of the first shark attacks recorded in Massachusetts.

During the Second Great Awakening, the town of Lynn was the regional center of Methodism in New England. The great circuit rider Jesse Lee visited the city in December 1790 to preach to a company gathered at the house of Benjamin Johnson, a shoemaker. In February 1791, Johnson and others organized a church, which met first at his house then at a hastily-built plain building in what would become the town center. The structure, which was soon also used for Town Meetings and other municipal functions, occupied less than 1500 square feet. “It had little or no finish inside, plain seats, no stoves, no carpets; but it was a place to worship God in humility and in truth” (Pickles, 144). Twenty years later, the congregation had outgrown their meeting house, and in 1812 they abandoned the old chapel to build a new church, First Methodist, popularly called “the Common.”

As part of that process, the congregation split. A little more than half (118 members) remained at the new church in the Common. The remaining 95 members, living in the Wood End section in the eastern part of Lynn, erected a local meeting house with the stock from the original chapel, and soon established it as a separate church. As Rev. Daniel Webb explains in the historical notes that open this volume:

In the year of our Lord 1811, the members of the Methodist Society in Lynn, inhabiting the part of the Town called Wood-end, finding the Old Chapel to be too small to accommodate the whole congregation, erected a Chapel for themselves. And soon after it was compleated [sic] employed the Rev. Epaphras Kibbe [i.e., Epaphras Kibby (1777-1864)] a local preacher, who laboured among them for several months. At the New England Conference for the year 1812, they requested an itinerant preacher to be stationed among them, which request was answered – And since that time, they have considered themselves as a body of christians separate from the Old or first Society of Methodists in said Town, as it respects their temporal concerns. But there is a mutual agreement between the two Societies to hold their quarterly meetings & love feasts together – two thirds of the time in the first, & one third in the New Society. The New Society have assumed the name of the “Eastern Methodist Society in Lynn,” and under that name were incorporated by the Legislature of the State of Massachusetts, in the Year of our Lord 1813.

The Wood End church would reorganize itself as St. Paul’s Methodist Church in 1861, and reunite with First Methodist in 1968.

The congregation at Wood End was proud of the fact that its members had hosted Jesse Lee’s second sermon in Lynn, on 20 December 1791. “I have not met with a company of people for a long time that had so much the appearance of a Methodist congregation as this,” Lee noted afterwards (p. 167). In 1792, Lynn hosted the first Methodist Conference in New England, presided over by Bishop Frances Asbury. Although independent, Wood End and the Common were united in one circuit with two pastors until 1819, when both had grown large enough to warrant separate leadership. When Timothy Merritt (1775-1845) was assigned in 1820, Woods End alone had 140 members.

The period covered by the record represents the height of the Second Great Awakening, which gave rise to so many movements for social reform, including woman’s rights, abolition, Sunday school, and temperance. The Methodists of Lynn were in the thick of these currents. We have not been able to view the quinquagenary history of the church Rev. Henry Warren published in 1861, but given their close association we presume the congregants of Wood End were engaged in the same work as the members of the Common. As one of the latter church’s pastors summarized:

Many of the leaders of the Wood End church were celebrated for their dedication to such causes. One of his colleagues recalled Rev. Timothy Merritt's revival at Wood End in 1820, which reaped 100 souls (Stevens, 371-72). It was at another revival at the church that Sunday school teacher Susan Bowler was convicted (Pierce, 28). The obituary for Rev. A. D. Sargent, who served from 1838 to 1840, notes that “He was one of the first to enter the antislavery movement, and in that great struggle he was true and faithful to the cause of the slave. The temperance cause never had a more true and ardent friend” (Minutes, p. 82). Among the children listed here whom Sargent baptized is one named after Angelina Grimke. Rev. Isaac Bonney, who served as pastor of Wood End from 1834 to 1835, had officiated at the marriage of the black abolitionist David Walker in 1826. Bonney left Lynn to take up a post in New Bedford, where Frederick Douglass joined his congregation (Hinks, 69). Regrettably, the record does not shed light on the question of which church Frederick Douglass was affiliated with in Lynn. He moved from New Bedford in 1841, the year after this volume concludes.

The volume includes a cumulative listing of hundreds of members beginning in 1813. Beginning on page 85 is an alphabetical record of members in 1836. A third membership list begins on page 102, prefaced by the complaint that the preceding register was imperfect and ill-organized.

The pastors are listed at the front, and there are class registers, and records of baptisms (including adult baptisms), marriages, and deaths.  A list at the rear names Salem church members affiliated with Wood End.

A list compiled by the previous owner identifies people in the registry who were veterans of the Revolution. Many were likely employed in Lynn’s thriving shoe industry. Most entries are annotated with personal details which, though brief, are revealing. Thus we note that Polly Attwill, a married woman, and Daniel Ramsdell were expelled for immorality on the same day in 1814, and that Joseph Allen was expelled for intemperance in 1822. Martha Curtain “died in peace,” while Mary Newhall died “of a nervous Fever, in which she was deprived of reason”; nevertheless she “had favour with God & Man.”

One of the most colorful entries here is for Joseph Blaney, Jr. (1777-1830), who has gone down in history as the first person to fall victim to a shark attack off the coast of Massachusetts. Blaney moved from Lynn to Swampscott, but still evidently kept some connection with the church in Wood End. According to the Salem Essex Register, Blaney out on a schooner with friends:

Mr. Blaney took the dory, and went alone about half a mile distant from the schooner to fish – he had been absent several hours, when he was observed waving his hat and calling for aid, and apparently disabled in one of his arms. A boat immediately to his assistance from another schooner at anchor near the same place, but she had proceeded but a short distance, when a large fish, supposed a Shark, was seen lying athwart the dory midships – he however was soon clear of the boat, and Mr. Blaney was still seen to be safe on board her. But before the boat which went to his assistance had reached him, the Shark renewed his attack, the boat instantly disappeared, and the water appeared in a foam. Nothing more was seen of Mr. Blaney, but the boat reappeared and was picked up, together with his hat, a small firkin, &c.

The entry in the church register reads simply: “Withdrew April 1820. Eaten by a shark.”

A record of great historical and genealogical significance for a congregation at the heart of New England Methodism during the Second Great Awakening.