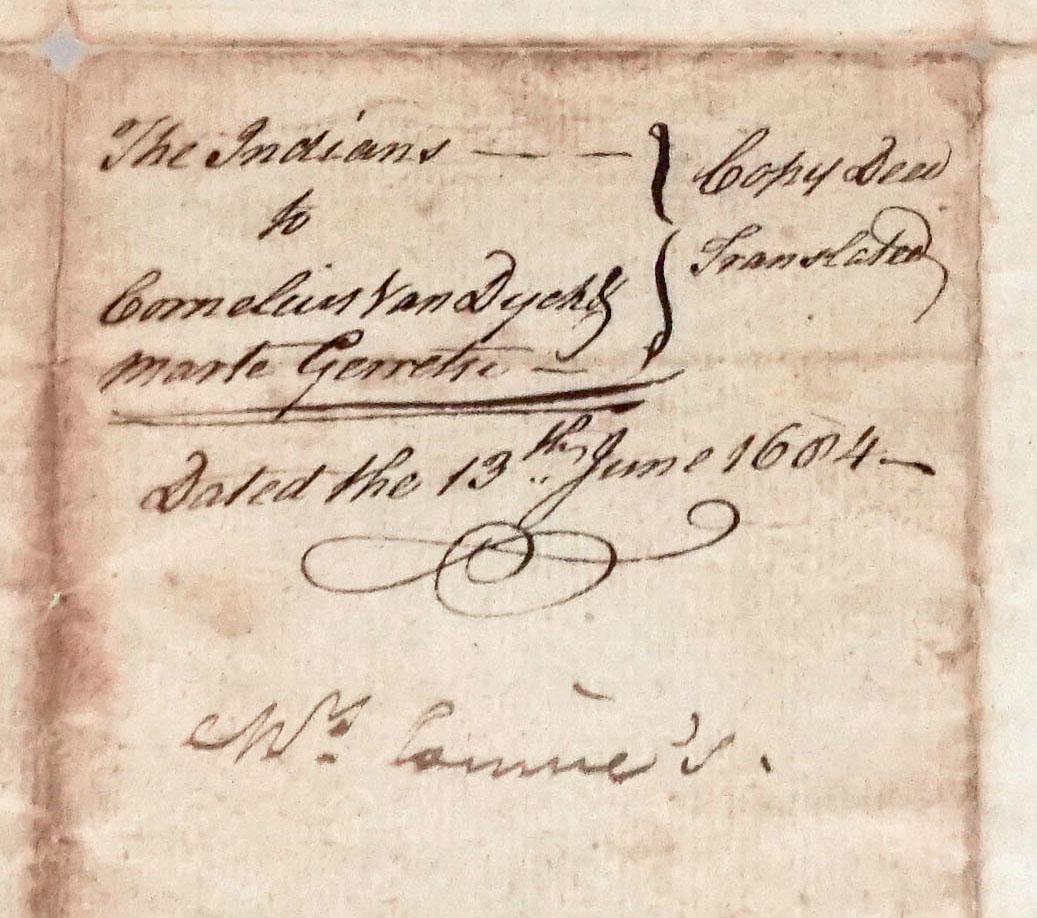 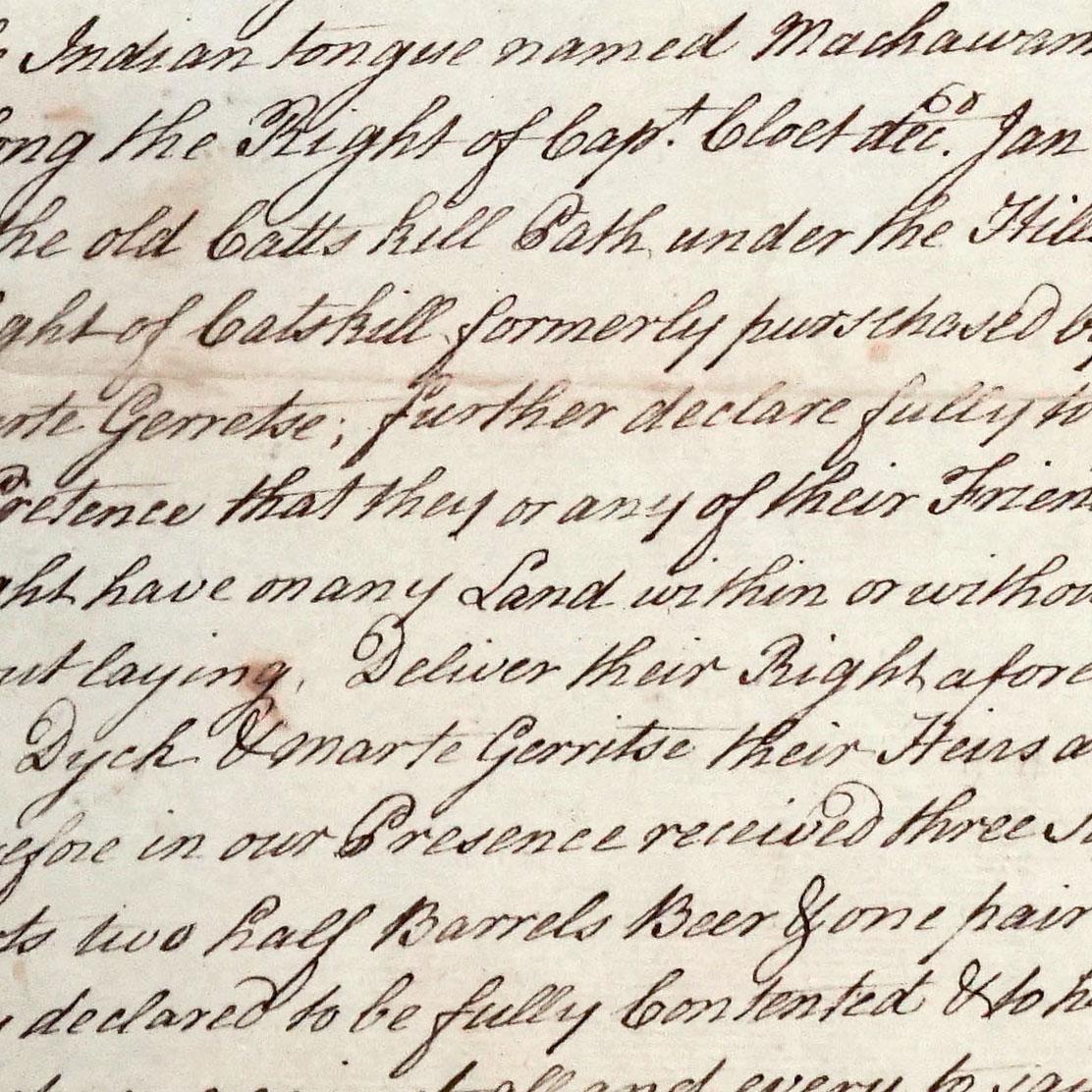 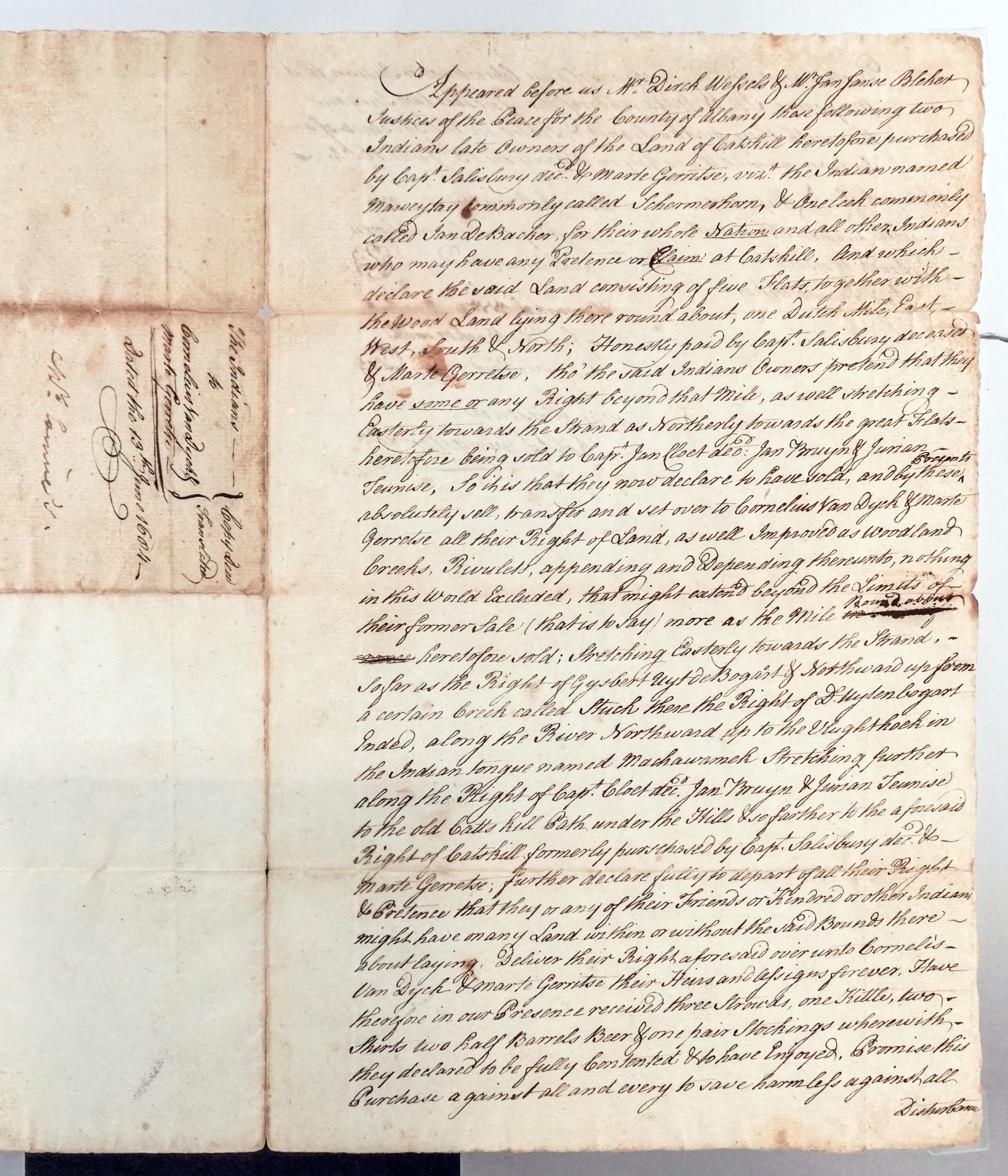 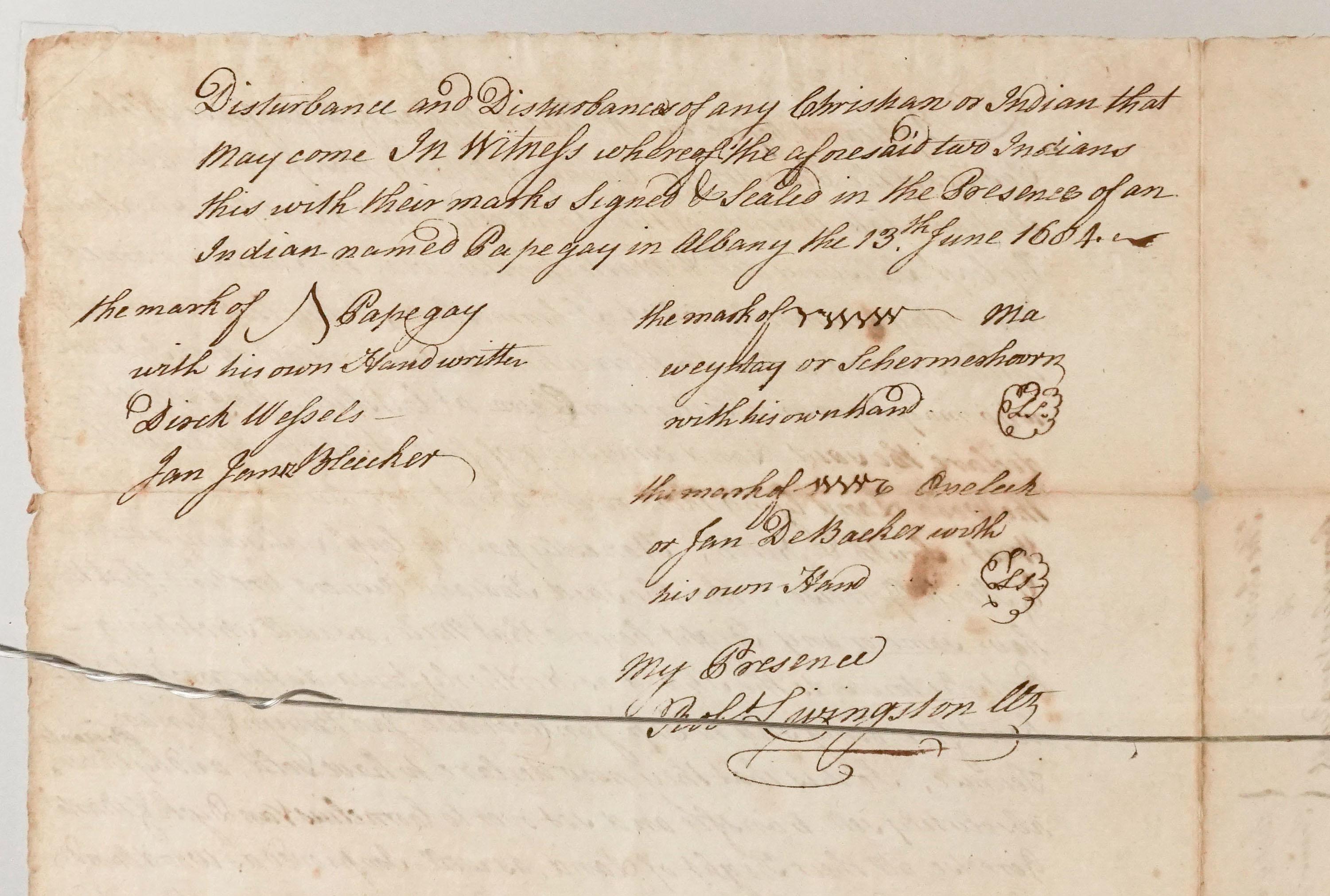 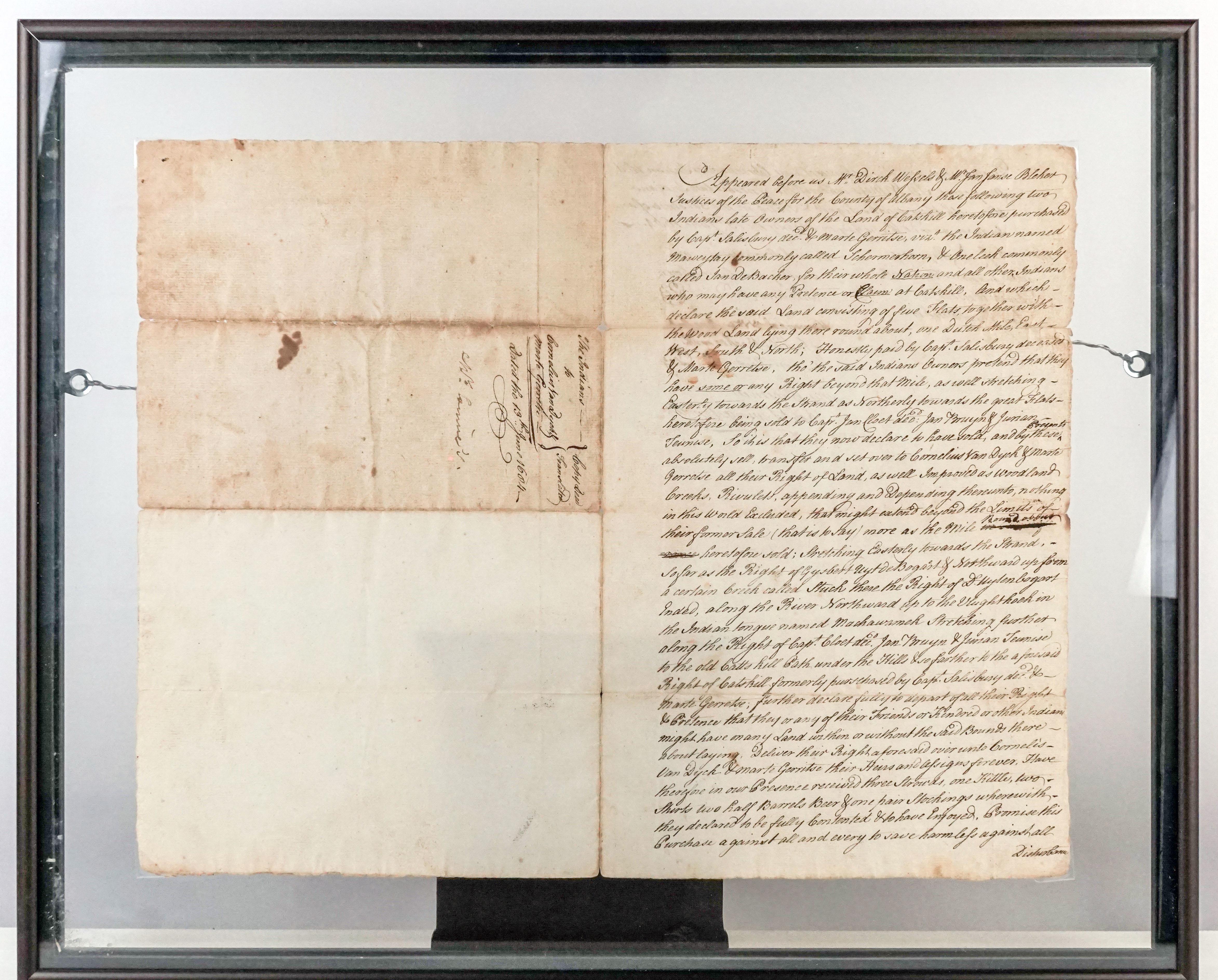 The Catskill Patent. The Indians to Cornelis Van Dyck & Marte Gerretse [Van Bergen]. Dated the 13th June 1684. Copy Deed Translated. A copy in English of the 1684 purchase and sale agreement for the Catskill Patent, a large tract in Greene County, New York, centered on what is now the hamlet of Leeds.  The document represents a translation from the original Dutch deed, and was likely prepared for the anglophone owners of the land. Beneath the docketed title is the name “Mr. Conine”, likely the son or grandson of Philip Leendertse Conyn, or Conine (1656-1700), whose descendants remain in Leeds to this day. This document was later used in the context of a legal dispute for which Alexander Hamilton served as counsel that was resolved in the landmark case of Van Gorden v. Jackson (1809). 1¼ pages. Folio, single-sheet folded, docketed on verso, creased at folds.  Mounted in a double-sided glass frame.

Dated 13 June 1684, this is the second and final purchase and sale agreement for the tracts of land named by the Mahican Indians Wachachkeek, Wichquanachtekak, Pachquiack, Assiskowacheek and Potick, and defined in the deed as “five flats” with the lands surrounding four miles in all directions.  At 35,500 acres, this was “the largest and most valuable patent ever granted for lands now entirely within” Greene County.[1]  As historian Shirley W. Dunn notes, such sales as this followed a long period of conflict between the Mahican and the Mohawks during which the Mahican population suffered significant losses; conveyances were driven in part by the need to establish good relations with Europeans though the granting of usufruct rights that otherwise might be usurped by Mohawks.[2]

For the land encompassed in the Catskill patent, the exchange price was “three Strowds [i.e., stroud, a coarse woolen cloth], one k[e]ttle, two shirts[,] two half Barrels Beer & one pair Stockings.”  The deed was signed by Dirck Wesselse [Ten Broeck] (1638-1717) and Jan Jansen Bleecker (1641-1732) as justices of the peace, Maweyntay (also called Schermerhoorn) and Onekeek (also called Jan de Backer) as the representatives of the sellers, Papegay as a witness, and Robert Livingston (1654-1728) as secretary; the copyist here has reproduced the signatures of the principles, adding “L. S.” (Locus Sigilli) to ratify the marks of the three Indian signatories. Since Livingston was perfectly bilingual we think it likely that it was he who prepared this translation for the anglophone heirs of Cornelis Van Dyke (1642-1686), who died two years after this sale.[3]

The first treaty for the parcel was executed on July 8th 1678 by a delegation of “about twenty Catskill and Mahikan Indians” who conveyed land rights to Sylvester Salisbury (ca. 1629-1679) and Martin Gerritsen Van Bergen (ca. 1630-1696). Salisbury’s death soon afterwards and the coming forward of additional claimants among the Indian nations made necessary a second pu­rchase to confirm and extend the initial sale. The purchasers in 1684 were named as Gerritsen and Van Dyke, who had married Salisbury’s widow, née Elizabeth Beeck (ca. 1644-ca. 1698). Although there was some shifting of the signatories between 1678 and 1684, Gerritsen and “Jan de Backer” (Onekeek) number among the principals in both deeds, and both were executed by Robert Livingston, whom State historian Stefan Bielinski has called “probably the most important person to live in colonial Albany.” Shirley W. Dunn identifies both Onekeek and Maweyntay as Mohicans. Writing in the 1880s, local historian Henry Brace called de Bakker (i.e. Onkeek) “a drunken Indian, with negro blood in his veins” who used to serve as a jockey in the horse races of the patroons.[4]

The deed conveys all “Right of Land, as well as Improved as woodland, Creeks, Rivulets, appending and Depending thereunto, nothing in this world Excluded.” Like many early conveyances, the document relies heavily on local knowledge. For example, the document speficies that the land extends eastward “towards the Strand so far as the Rights of Gysbert Uyt de Bogaert & northward up from a certain Creek called Stuck, where the Right of D. Uytenbogart Ended, along the River Northward up to the Vlughthoek in the Indian tongue named Machawamek,” and so on.  Unsurprisingly, such language as this would soon lead to boundary disputes. In the case of the Catskill patent, the dispute resulted in a landmark legal decision. 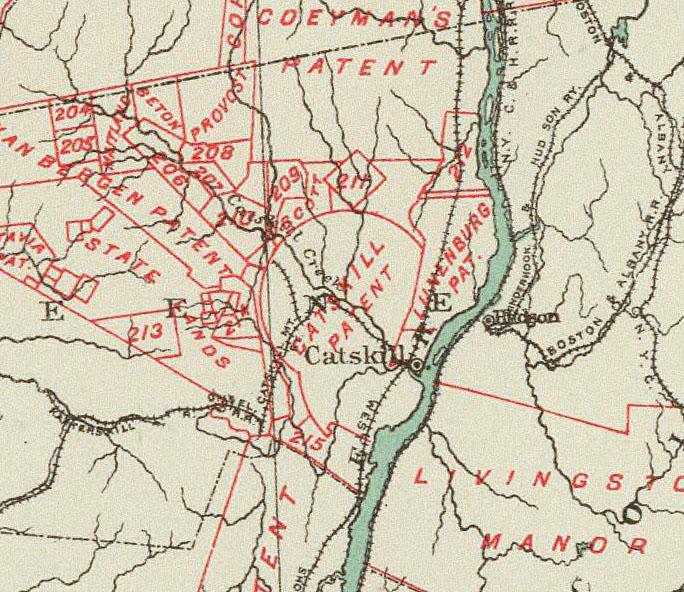 From Map of the State of New York Showing the Location of the Original Land Grants, Patents and Purchases (Joseph Bien, 1895)

Our record of the suit over the Catskill patent starts on 16 June 1797, when George Clarke, the owner of extensive lands in New York State, paid a retainer to Alexander Hamilton to settle a dispute over the precise borders of the land, which then lay in Ulster County (Greene County was not established until 25 March 1800).  In 1703, Helmer Jansen acquired land adjacent to the Catskill patent from Guysbert Outen Bogart, who was named in the Catskill patent as a neighbor. When Jansen died in 1733, the land was returned to the crown. In 1738, it was regranted to John Lindsay, who obtained a new patent (“the Lindsay patent”) and partitioned the land into lots. The buyers – who included George Clarke and Cadwallader Colden – agreed to share the expense of defending their title against other claimants.   By the 1790s, that became necessary. In the absence of clear boundaries, John Reeves, Abraham Van Gorden, and others claimed rights under the original Catskill patent.

In a letter to Hamilton on 15 August 1797 – the only part of their correspondence that survives – Clarke expressed concern that he was unable to locate some of the necessary documents in the case:

I have made every enquiry in my Power in order to discover the deed of Trust from John Lindesay … but have not as yet been fortunate enough to discover in whose Hands it is …. I should wish to know your sentiments as to the loss of the Deed, & what effect the memorandum may produce in a Court of Law.[5]

The decision was overturned in February 1809, however, in a still higher court, the Supreme Court of Judicature. For this case, Henry and Hamilton brought on Richard Harrison; Thomas Addis Emmet and Ebenezer Foote joined Van Vechten. That case, Van Gorden v. Jackson, had an impact beyond the question at hand, setting important precedents that would shape future boundary disputes, and not incidentally further erode Indian land rights.

In his lengthy ruling, Chancellor John Lansing made the arresting argument that Indian conveyances such as this deed of 1684 “were never admitted, as of themselves, to be a source of legal title.” Rather, Lansing said, “Indian deeds were obtained for the purpose of proving that the rights of the natives were extinguished.” Legal title was granted by the crown, not by Indians.  But that did not render this conveyance irrelevant. “This second Indian deed, in my opinion, is a very important document, to aid in giving a constriction to the bounds of the [patent].” Lansing’s ruling quotes extensively from the English version of the deed of 1684, making it clear that he had direct access to the document.[7]

We have been unable to locate other copies of this important text. There does not appear to be one on file at the State Archives, which suffered fires in 1880 and 1911, or the Albany County Hall of Records, and the Greene County Historical Society has no record of a copy. Jonathan Pearson and A. J. F. Van Laer published the text of the patent in 1916, but this was a new translation from the Dutch, drawn from the transcript in the State’s ledgers, and their version varies significantly from the text presented here.  In general, the Pearson and Van Laer translation uses language that is more legally precise and less aggressive than that employed in this contemporary version, which denigrates Indian claims even as it pays for them (“Tho’ the said Indian owners pretend that they have some or any Right…”).[8] Given the important role that this document played not only in the decision in Van Gorden v. Jackson but also in Indian land disputes more generally, the language used by parties in the original case is significant. This appears to be the only surviving record of it.

There is one other aspect of the language of this deed worth pointing out.  The text identifies two of the signatories, Dirck Wesselse and Jan Jansen Bleecker, as justices of the peace for “the County of Albany.” The County of Albany was established on 1 November 1683, only a few months before this document was signed. According to Pearson and Van Laer, this deed represents the first acknowledgement of the County in a legal conveyance.

A foundational document in the history of the Catskills and the Empire State more generally, offering new insights into colonial settlement, Indian relations, and the legal practice of Alexander Hamilton, with excellent local provenance.

[1] History of Greene County, New York, with Biographical Sketches of Its Prominent Men (New York: J. B. Beers & Co., 1884), pp. 25-26. For a history of the land encompassed by the patent, see idem, pp. 93-106.  The text is available online at https://vedderresearchlibrary.org/beers-history-greene-county/.

[3] We are not 100% confident that this is Livingston’s hand, however. The signature and handwriting seem consistent with some samples we have seen and not with others. The examples in the digital collections of the New York State Archives are similar (see http://digitalcollections.archives.nysed.gov/index.php/Detail/objects/49838 and http://digitalcollections.archives.nysed.gov/index.php/Detail/objects/18653), and this signature resembles the one reproduced in Edwin Brockholst Livingston’s The Livingstons of Livingston Manor (New York: The Knickerbocker Press, 1901), p. 336a. There are many examples of documents by Livingston at the Gilder Lehrman Institute of American History, but the handwriting is inconsistent.

[4] Stefan Bielinski, “Robert Livingston,” http://exhibitions.nysm.nysed.gov//albany/bios/l/rlivingston94.­html. This site offers biographical sketches of most of the principles in this transaction. Dunn, The Mohicans and their land, Appendix B.  Henry Brace, “Old Catskill: An outline of the early history of the town,” in History of Greene County, p. 92. Brace generally was contemptuous of Indians.

[7] Van Gorden v. Jackson, 5 Johns. 440-476; cited at p. 460. For further discussion of the ramifications of this case with respect to Indian claims, see Stuart Banner, How the Indians lost their land: law and power on the frontier (Cambridge: Harvard University Press, 2005), p. 170 et seq.

[8] Jonathan Pearson and A. J. F. Van Laer, Early records of the City and County of Albany and Colony of Rensselaerswyck (Albany: The University of the State of New York, 1916), 2: 221-223. https://archive.org/details/earlyrecordsofc02alba/page/220. They translate the quoted passage more diplomatically as “whereas said Indian owner claim that they have some rights…” (p. 222).