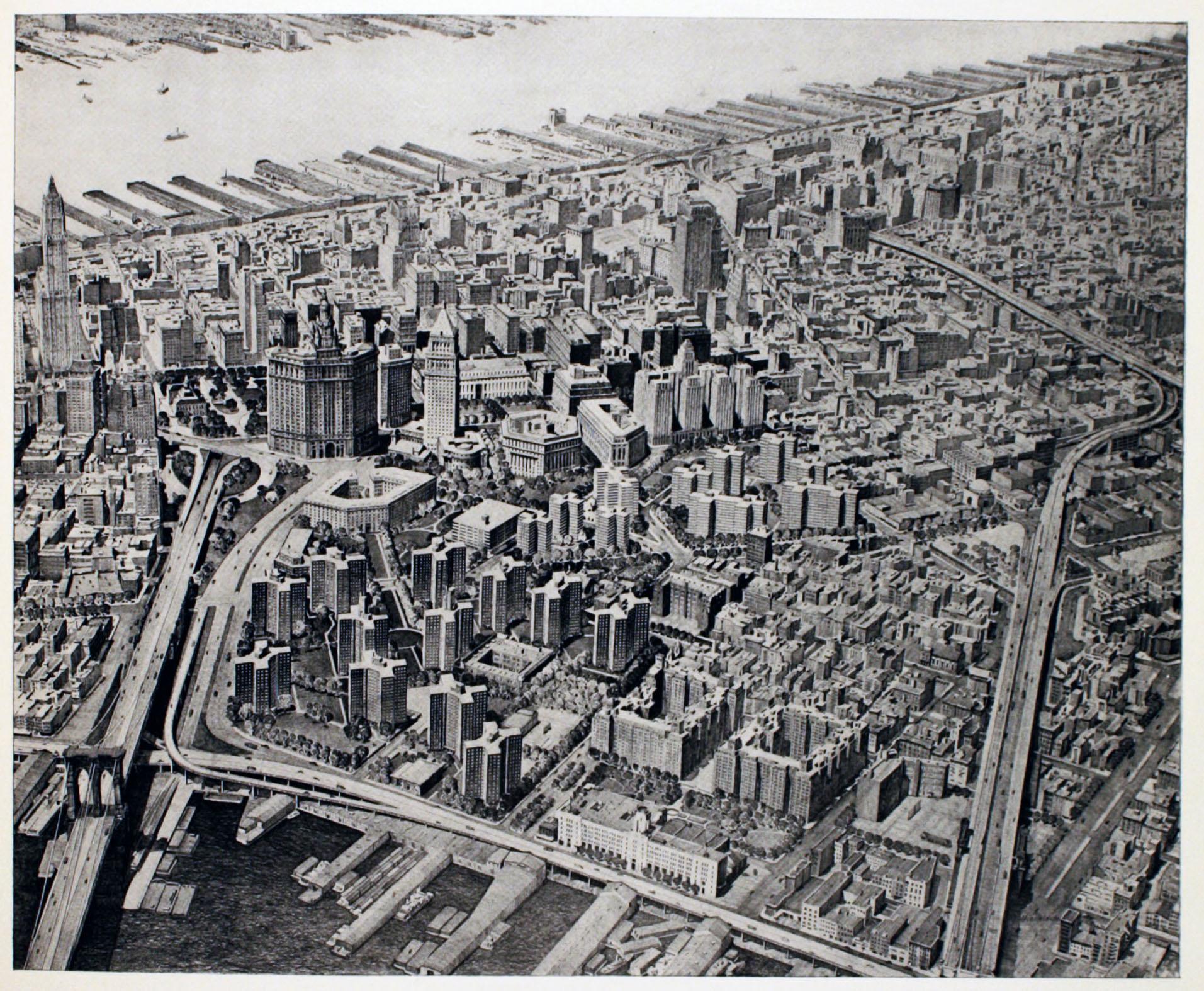 Released in June 1948, this report was the result of a two-year process initiated by the City Planning Commission in connection with the Postwar Works Program for reinventing lower Manhattan in high modernist style.  Focused around City Hall and Foley Square, the proposed redevelopment project envisioned a complete restructuring of the area, from the East River to Broadway, and from Brooklyn Bridge to Canal Street.  The plan included new tunnels and highways, widened streets, a new Police headquarters, a new bus terminal, and other public buildings, as well as an expanded Foley Park. The proposed cost was $100 million, and the destruction of old municipal buildings, and neighborhoods in Chinatown and the Lower East Side. The plan did not offer suggestions for relocating residents of “squalid slum areas” and “streets that have outlived their usefulness.”

The Commission was chaired by Robert F. Wagner, Jr., son of New York’s leading senator; he would go on to become Manhattan Borough President, and then Mayor of New York City. Robert Moses sat on the Committee, as did his Boswell, Cleveland Rodgers. The architectural firm of Clarke, Rapuano, and Holleran consulted.  To illustrate their concept, they tapped the architectural artist Nicholas Vassilieve [Nikolai Vasilyevich Vasilyev], a leader of the “Northern Modern” architectural movement in Russia, who won over 90 architectural competitions in St. Petersburg before leaving Russia in 1918. He emigrated to the United States in 1923, and anglicized his name in 1928.

Vassilieve’s brilliantly abstract cover contrasts radiating circles – suggesting both a targeted focus and a rational order – with a fractured and jagged map of the City. All roads lead to Foley Square.  The interior illustrations offer a detailed cityscape of monumental power that only Vassilieve could depict: here was an attainable future for Gotham.

Except of course it wasn’t. The Master Plan for the Civic Center was approved in May 1949. But putting it in place – ah, that was another matter.  The Commission produced a revised plan in 1963, but a series of suits and protests undermined enthusiasm, and in 1965 New York City passed a new Landmarks Law to limit the destruction of historic buildings.  As irony would have it, the mayor who signed the law into place was the man who proposed the project in the first place, Robert F. Wagner, Jr.