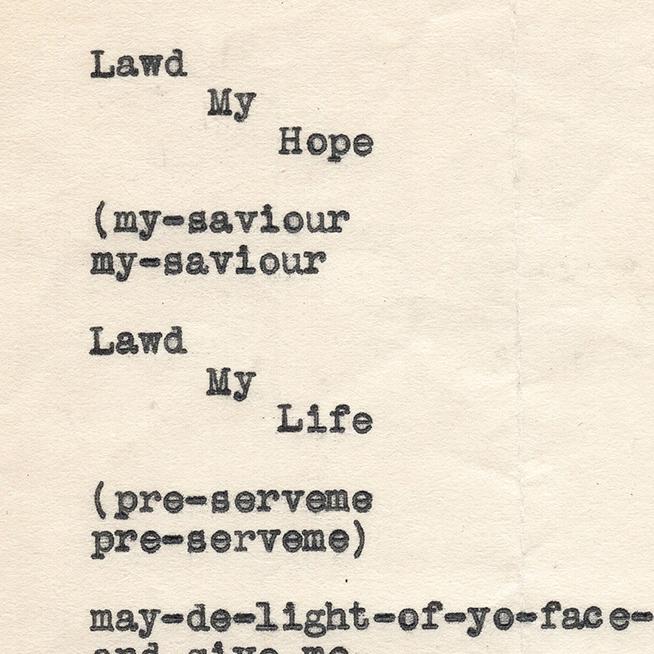 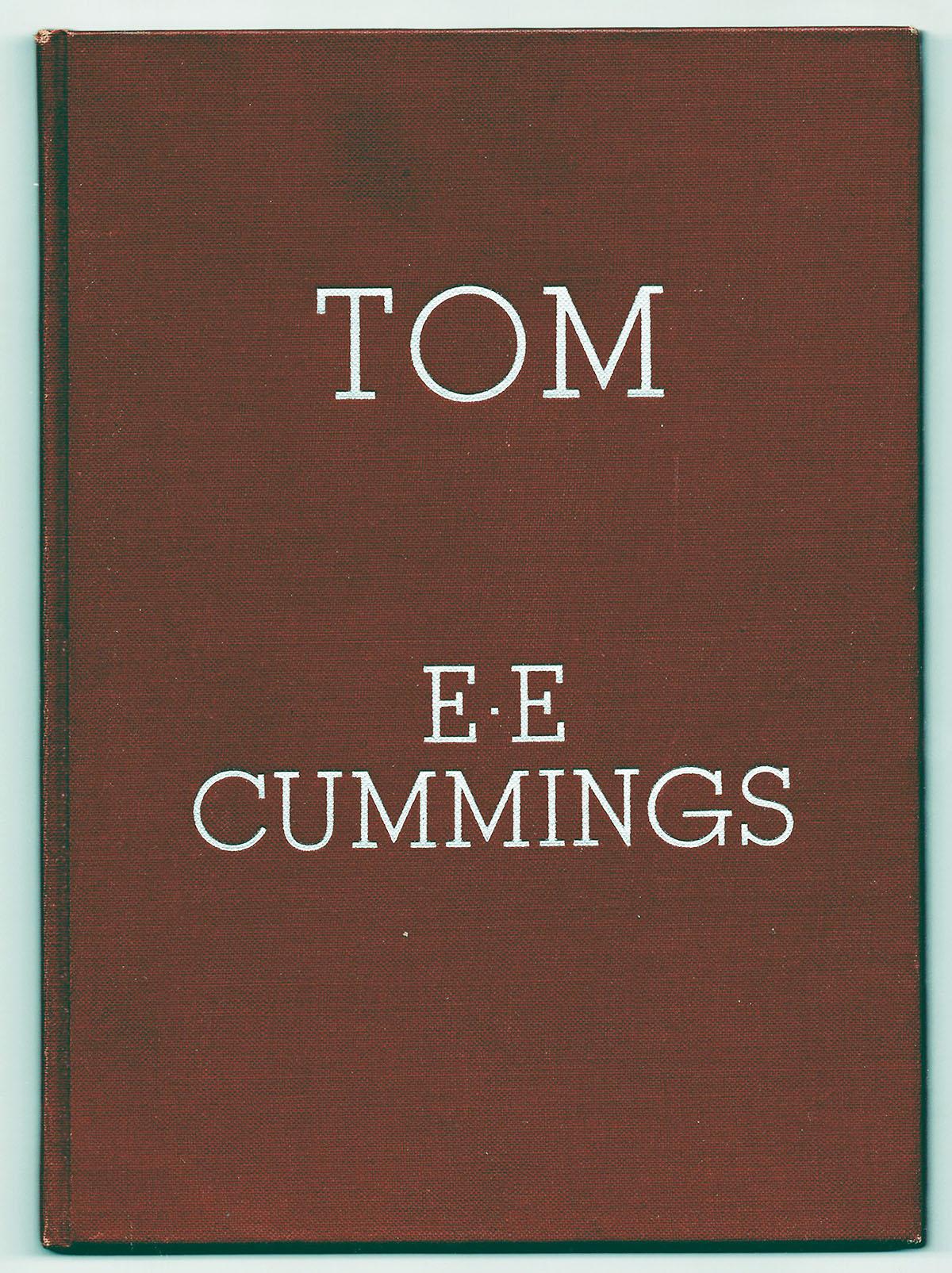 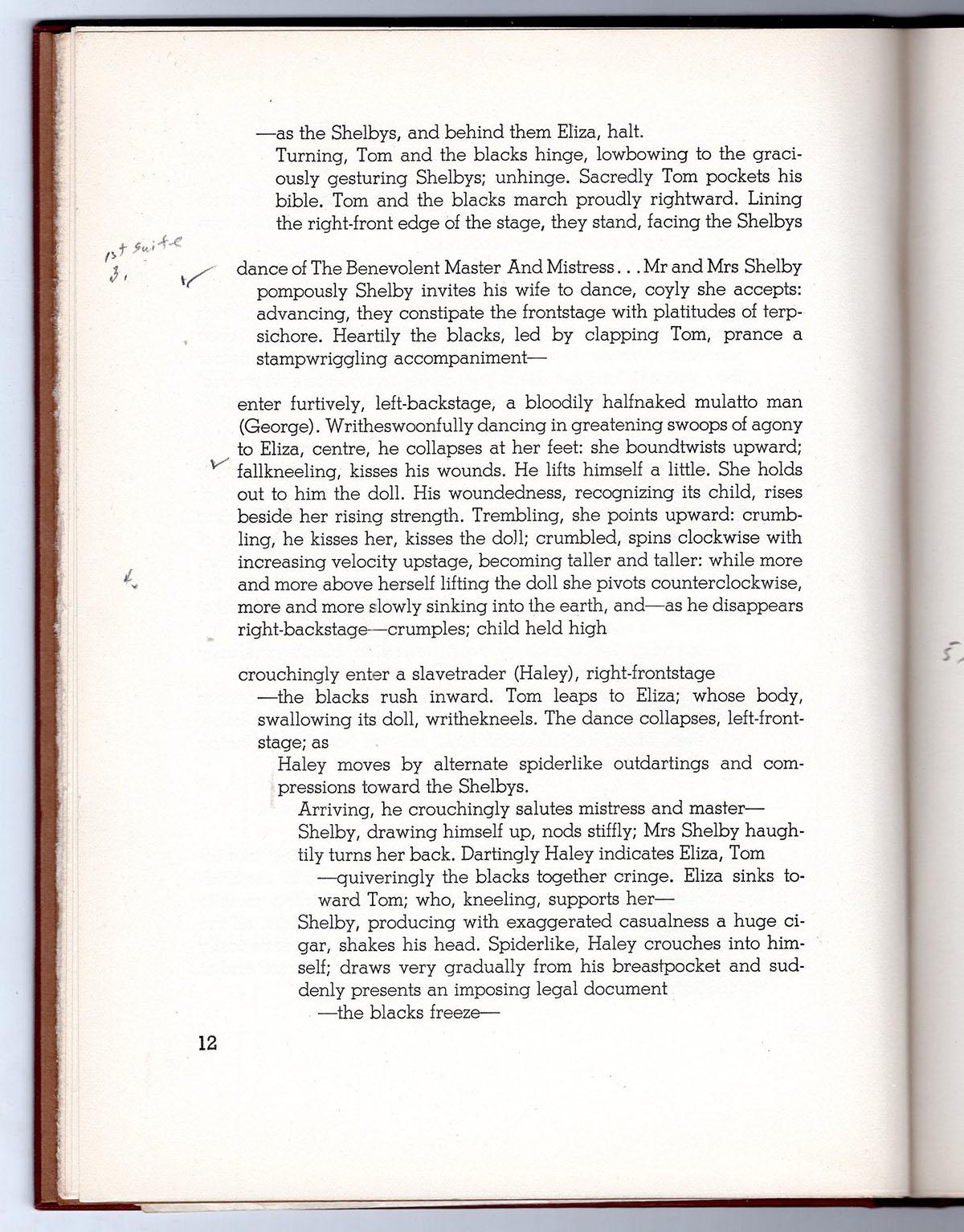 TOM, the unproduced ballet by Cummings and David Diamond, had its origins in July 1933.[1] Lincoln Kirstein, who had founded the literary journal Hound and Horn while a student at Harvard, and who embraced a unified vision of the arts, and approached Cummings about writing a scenario for ballet. Cummings’s partner Marion Morehouse suggested adapting Uncle Tom’s Cabin, which in the nineteenth century had been the foundation for one of the most successful plays in the American theater. Cummings began work on the scenario in 1934, and Kirstein hoped to mount a production by the fall. But there were problems. George Balanchine, the choreographer with whom Kirstein had partnered, was bewildered by the verbose scenario.[2] And they could not find a composer willing to take on the project. In 1937, Cummings recalled his difficulties: “Roger Sessions said he would need a year. Virgil Thompson sidestepped gracefully. Aaron Copeland [Copland] never peeped. Paul Boles [Bowles] wouldn’t touch it with a television ray. Even George Gershwin later died.” As Kirstein later admitted, Cummings’s scenario might have worked as a filmscript, but it was “unsuitable for production as a ballet.” Cummings arranged to have his scenario published by a small press, with a frontispiece by Ben Shahn. The book was issued in October 1935.

Meanwhile, the young composer David Diamond (1915-2005) had recently completed his studies at the Eastman School of Music, where he attracted the attention of Hildegarde Watson, who was along with her husband a key patron of American modernism. In 1934 Diamond moved to Manhattan to study composition with Roger Sessions. Sessions introduced him to Copland (who had scored poems by Cummings in 1927). When Copland and Watson told Diamond that Cummings – a poet he had long revered -- was looking to produce a ballet, the young composer, then only 20 years old, volunteered for the honor. The copy of Tom offered here is the one Cummings sent to Diamond in January 1936. (A small pencil correction to p. 11 – “Ecstacy” to “Ecstasy” – may be in the poet’s hand.) Diamond responded to the text with enthusiasm, “This is a real ballet script you have given me.” It was, notes biographer Richard S. Kennedy, “the first encouraging judgment that Cummings had heard.” Their collaboration, which represented Diamond’s first major commission, inaugurated a lifelong friendship that resulted in several projects including an orchestral fantasy based on The Enormous Room and a number of songs set to poems by Cummings.

Shortly after he accepted the commission, Diamond’s patrons sent him to Paris to be near Léonide Massine, Kirstein’s second choice as choreographer. He worked on the score for TOM all summer, completing a first draft in August 1936. The copy of Tom here has only minimal notations to document his effort – a series of numbers in the margins to mark divisions in the score, and the notation “1st suite” on p. 12, opposite the “dance of The Benevolent Master And Mistress.”

In July 1936, while working in Paris, Diamond wrote to Cummings with a request. Would he write a spiritual for a chorus of slaves to sing during the dance of Religious Ecstasy in Episode One? The poet obliged by writing “Lawd My Hope,” the typescript presented here.

The poem represents an uncommon, and possibly unique example of Cummings’s engagement with the African American vernacular. Black voices are rare in the work of this classically-trained modernist. Jean Le Nègre in The Enormous Room is a wonderful, vibrant, and charming character, but he is decidedly not American. A rather problematic early poem, “(tonite”, evokes a black social context, but the race of the speaker is ambiguous. The poem “Lawd My Hope” comes closest to, perhaps, is Cummings’s “ump-A-tum” jazz poem, “Theys SO alive,” published in 1935, which (despite its invocation of the n-word), celebrates the vibrancy of African American life. Just as “Theys SO alive” imitates in its vocalization and its kinesthetic arrangement the contrapuntal rhythms of jazz, so “Lawd My Hope” pays homage to the “sorrow songs” which W. E. B. Du Bois called “the articulate message of the slave to the world.”[3]

“Lawd My Hope” has not been collected in any of Cummings’ published works. Its only appearance in print is in Richard Kennedy’s biography of Cummings, Dreams in the Mirror: A biography of E. E. Cummings (New York: Liveright, 1980), where it appears (slightly emended) on p. 373.[4] Although the ballet was never staged, Diamond premiered the First Orchestral Suite from TOM in 1985 with the Seattle Symphony, under the baton of Gerard Schwarz; as a choral work, the dance of Religious Ecstasy was omitted.

We have not located another manuscript copy of “Lawd My Hope,” which is surprising because Cummings habitually saved multiple drafts of each poem. There are extensive materials related to Tom at the Houghton Library, but “Lawd My Hope” is not among them, and Kennedy does not mention another extant draft. In his notes to the biography, Kennedy thanks Diamond “for allowing me to reproduce this song, the manuscript for which is in his possession” (p. 508 n.5). Although the typescript is unsigned, Cummings scholar Michael Webster notes (in a personal communication) that everything about it proclaims its authenticity as being the product of the poet’s hand – the typewriter font, the paper, the spacing of the text, and of course the provenance. At the bottom of the sheet, Diamond has typed a statement on the history and copyright status of the poem, possibly for Kennedy’s benefit.

A significant contribution to the canon of Cummings’s work, and a fascinating relic of an important collaborative relationship.

[1] Cummings scholars typically spell Tom with only the initial letter capitalized. But Diamond used all caps when discussing the composition, TOM. We recognize the difference in orthography to distinguish between the poet’s text and the composer’s score.

[2] And with stage directions such as “advancing, they constipate the frontstage with platitudes of terpsichore” who can blame him?

[4] Kennedy added a punctuation mark where none appeared in the typescript.