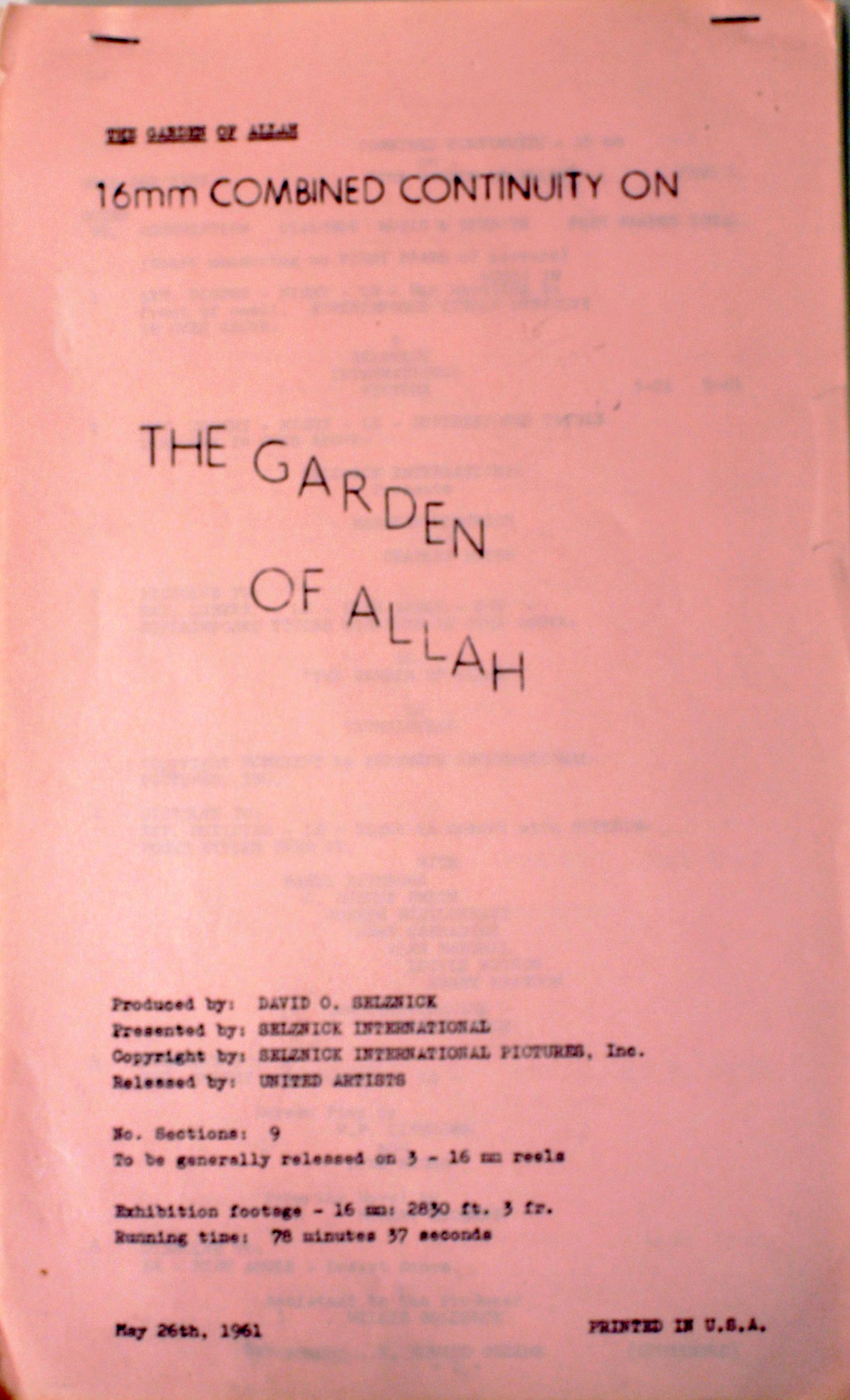 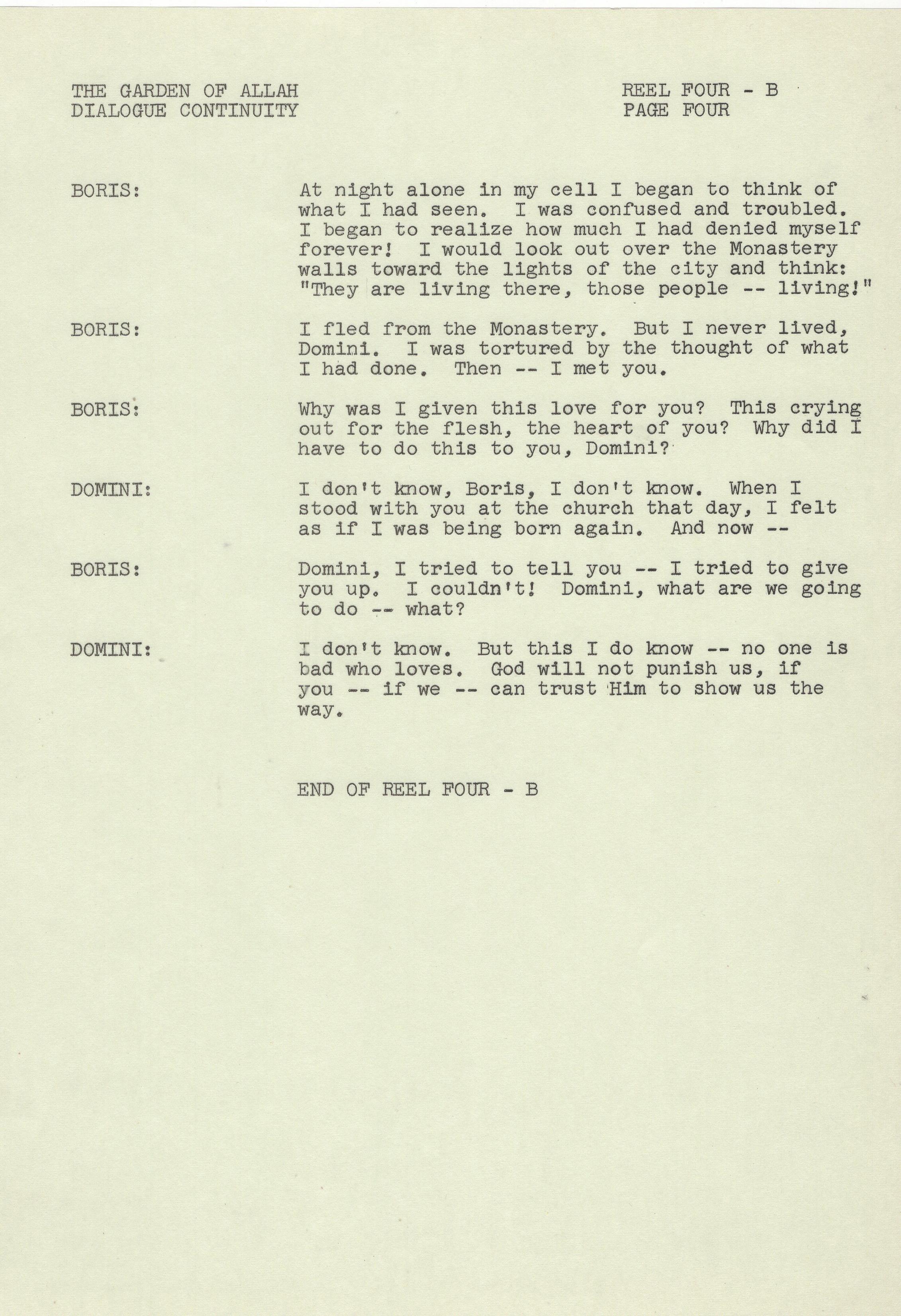 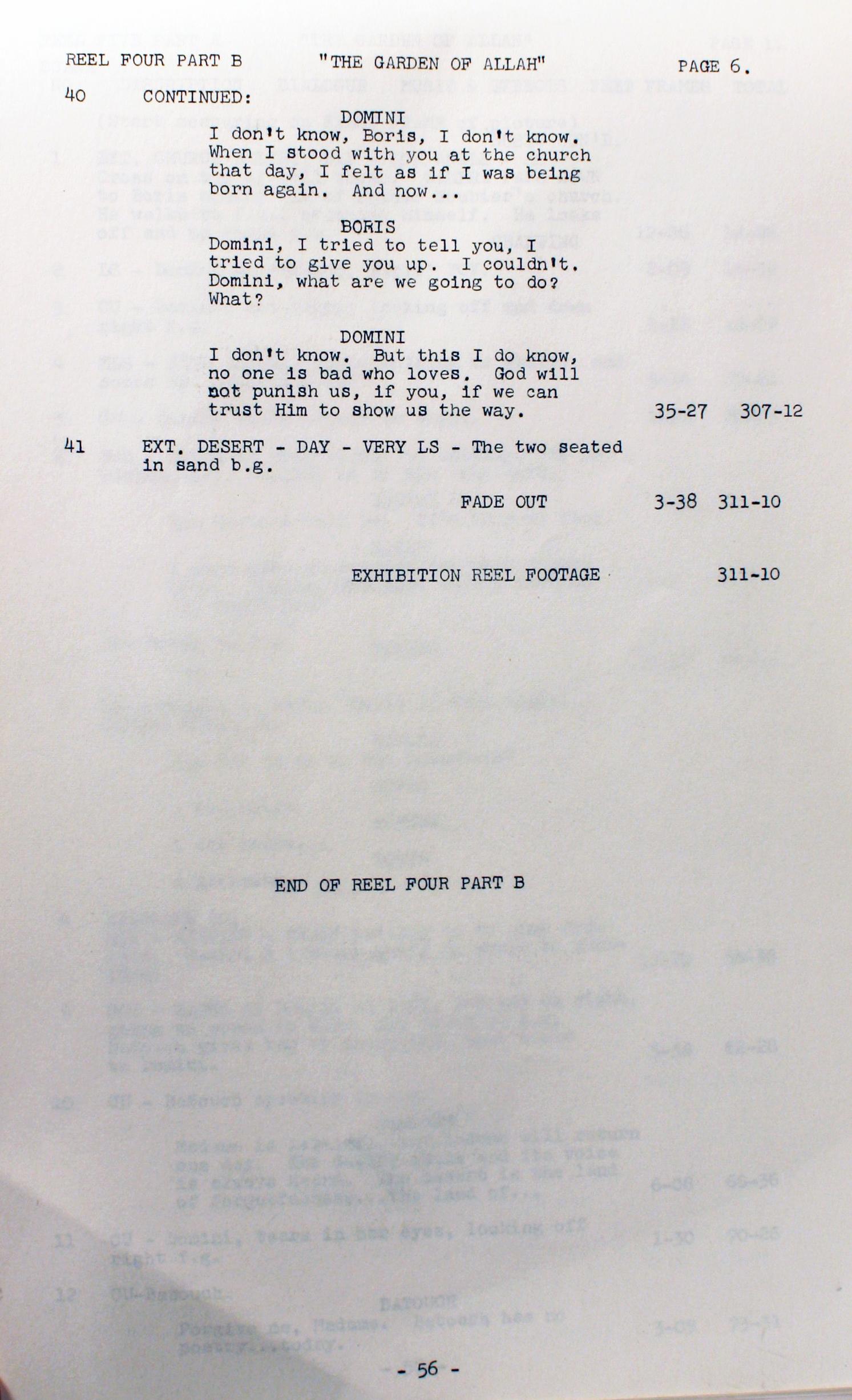 Two post-production versions of the script for this lush movie, one of the first to be filmed in technicolor, with the screenplay credited to Lipscomb and the dialogue credited to Riggs, who started work as a screenwriter in Hollywood in 1930. “Lynn Riggs, brilliant young playwright is the current white-haired boy of Hollywood, reported Screen and Radio Weekly on April 12, 1936. “He has been brought back to Hollywood by David Selznick to do the dialogue for The Garden of Allah.”

Riggs’s biographer notes that he stayed on location in the desert outside Yuma, Arizona, while the movie was being filmed “in order to rewrite as necessary.” These continuity scripts, which were prepared after the film was completed, vary from the first drafts of the screenplay in that they present the final version of Riggs’s script including his on-set rewrites. The first script, which presents only Riggs’s dialogue, was prepared in 1936 by the Selznick Studios primarily for the use of translators to prepare subtitles for foreign releases of the film. The second, which supplements Riggs’ dialogue with additional cues from the script, was prepared in 1961 in anticipation of the film’s distribution on television.

The Garden of Allah is a tragic tale of star-crossed lovers who meet in the Sahara. Domini (Marlene Dietrich), a wealthy, deeply pious heiress who has led a cloistered life, meets the brooding, mysterious Boris (Charles Boyer). Hosted by the urbane Count Anteoni (Basil Rathbone) in a paradisical oasis, the two enjoy a brief happiness until Boris reveals his bitter secret – he is a Trappist monk, and has broken his vows. Realizing that he cannot find peace so long as he is living a lie, the two agree he must return.

Although the story was not original to Riggs – the film was based on a 1904 novel by Robert Hitchens, and had twice earlier been adapted for the silver screen – one imagines that the conflict Boris faced in harboring a love that clashed with his true, hidden identity must have had personal resonances for a gay man who masked his sexuality by appearing in public in the company of such starlets as Bette Davis and Joan Crawford. “Love in most of Riggs’s plays and poems, is more a source of pain than pleasure,” notes his biographer Phyllis Cole Braunlich.  The secret sorrow of a forbidden love serves as a leitmotif throughout the screenplay: “No one but God and I knows what is in my heart.” Indeed, many lines from sound like echoes from what film historian Vince Russo called “the celluloid closet”:

Boris: For the first time I can bear to live in the world! … There are things in a man’s life it’s best to forget. There are dark places which should be left dark.

Rare and revealing artifacts from Riggs’s career in Hollywood.