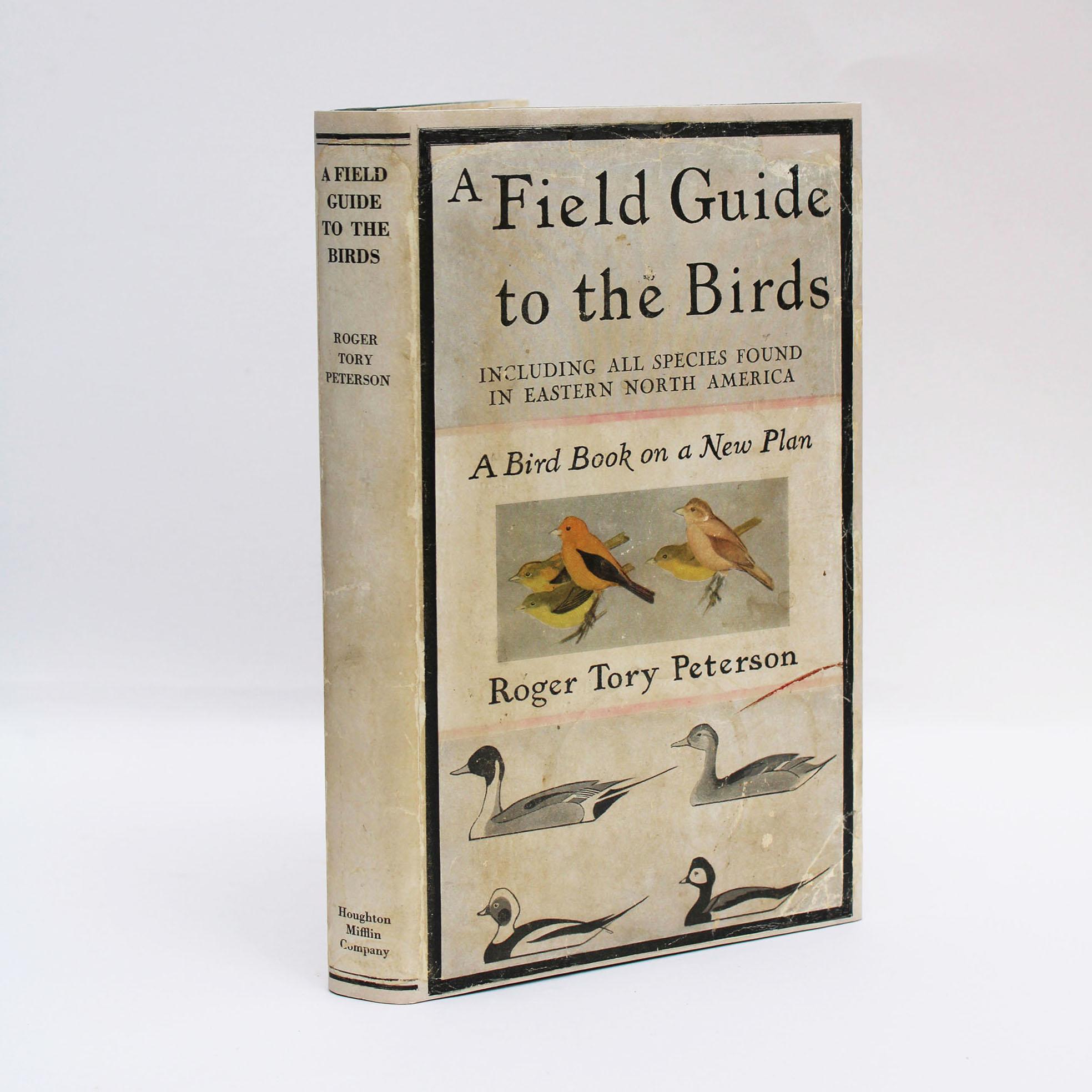 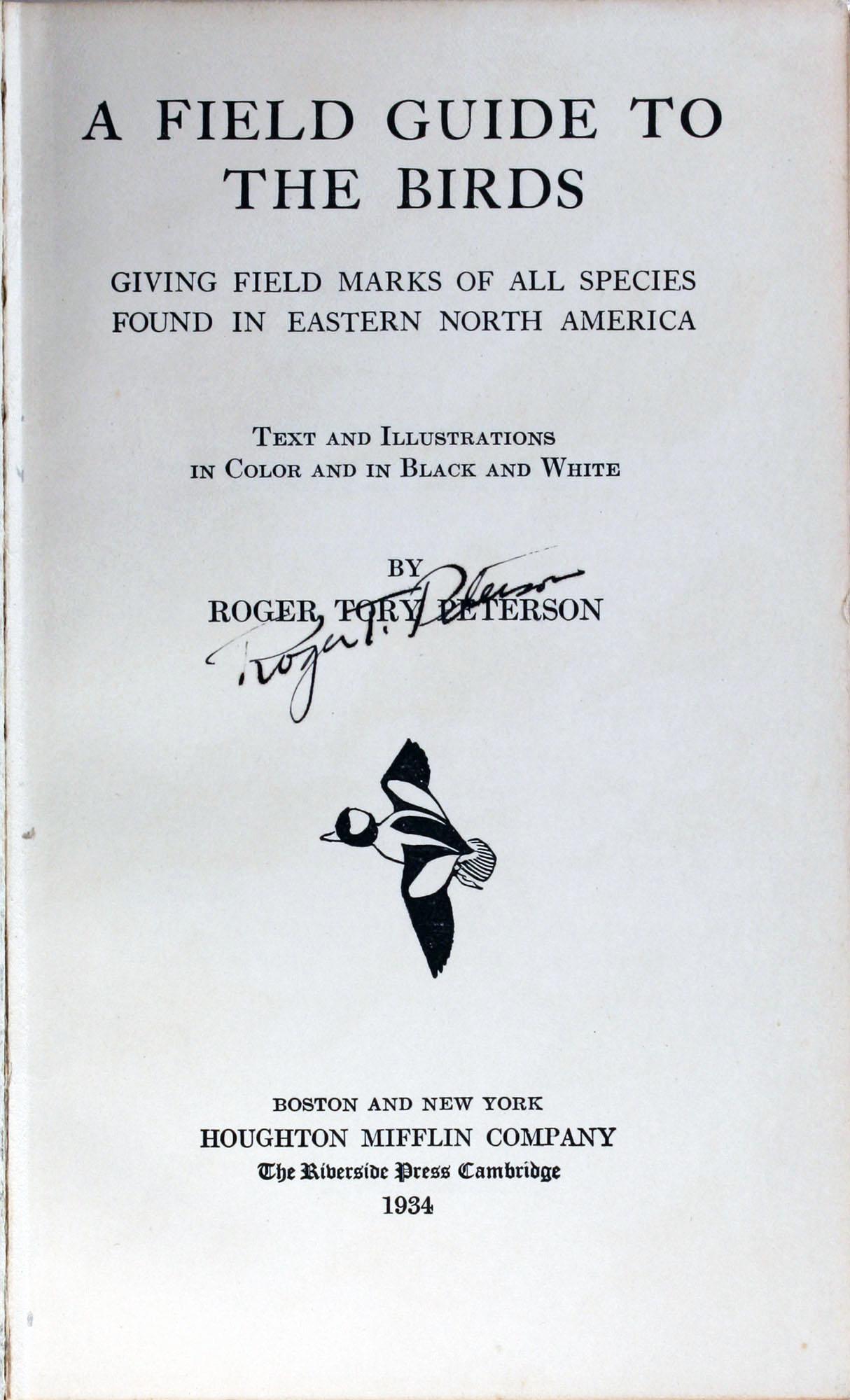 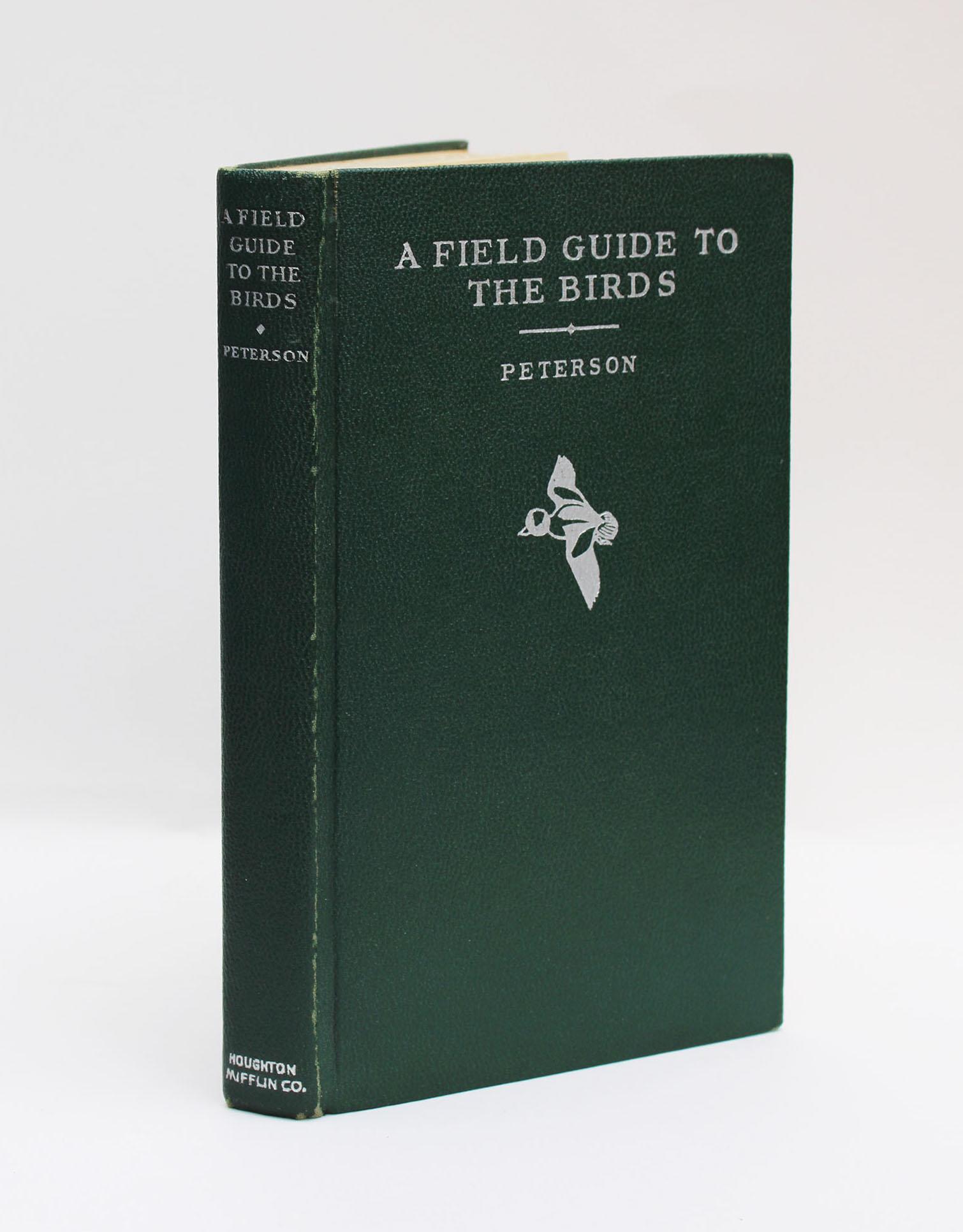 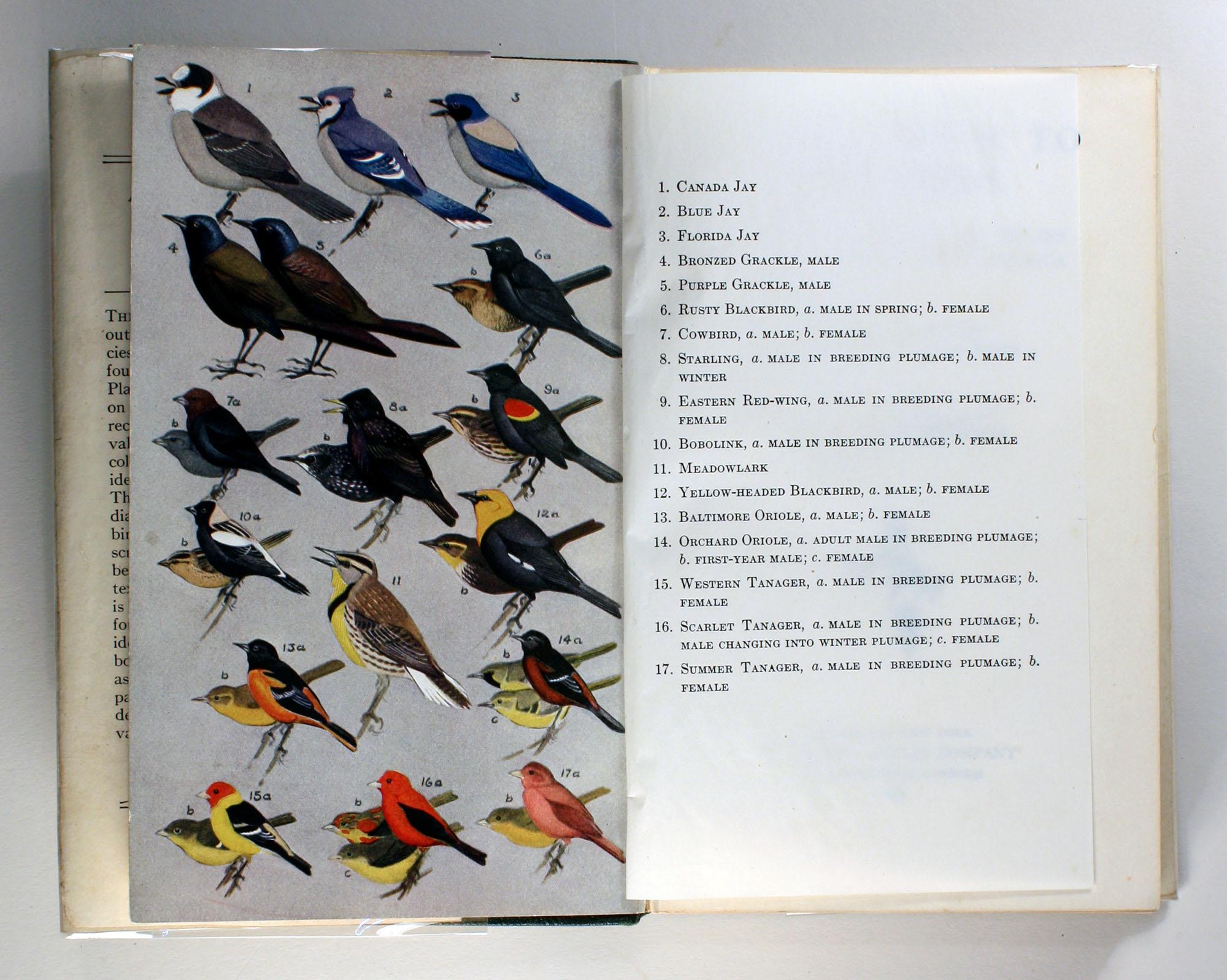 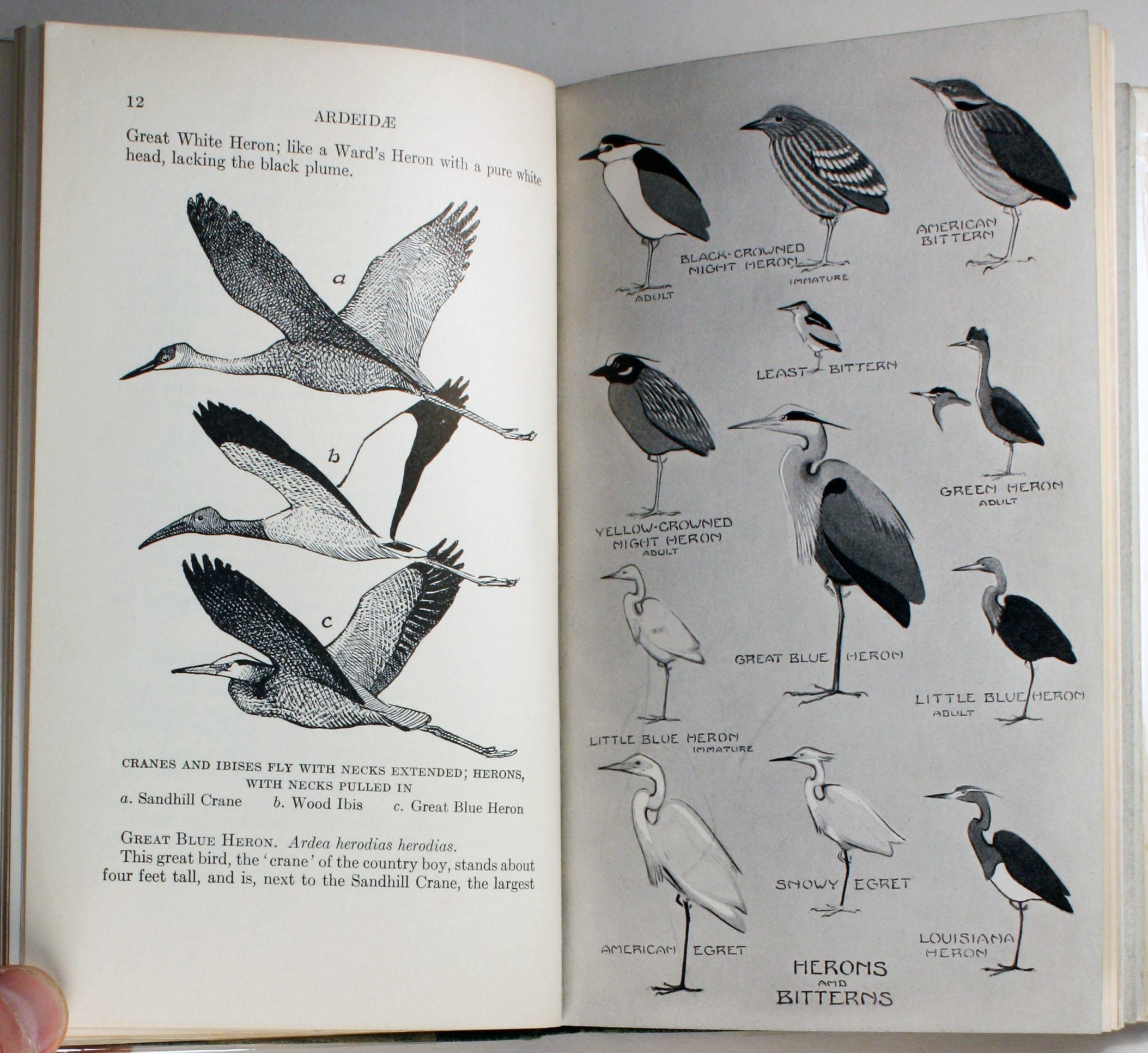 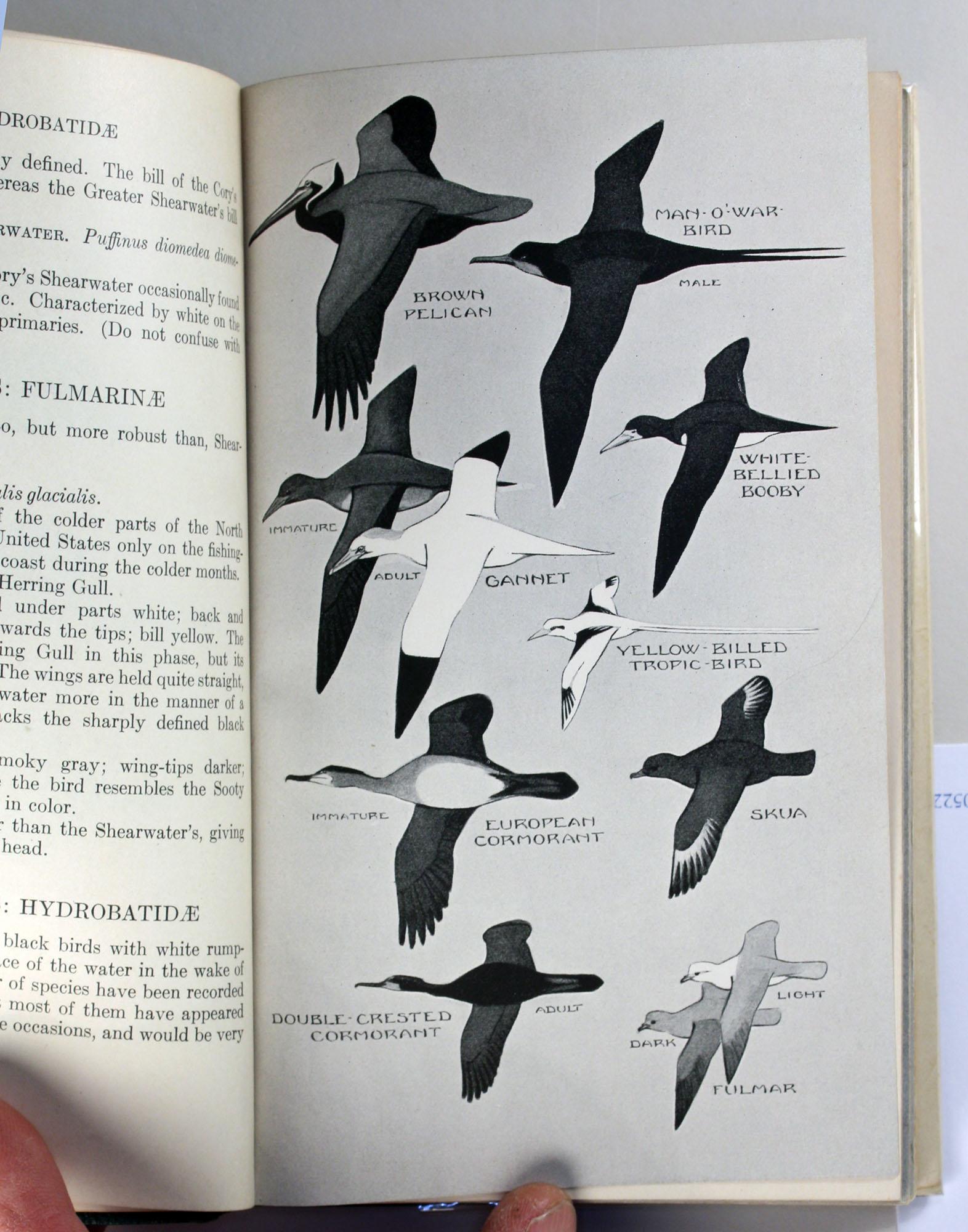 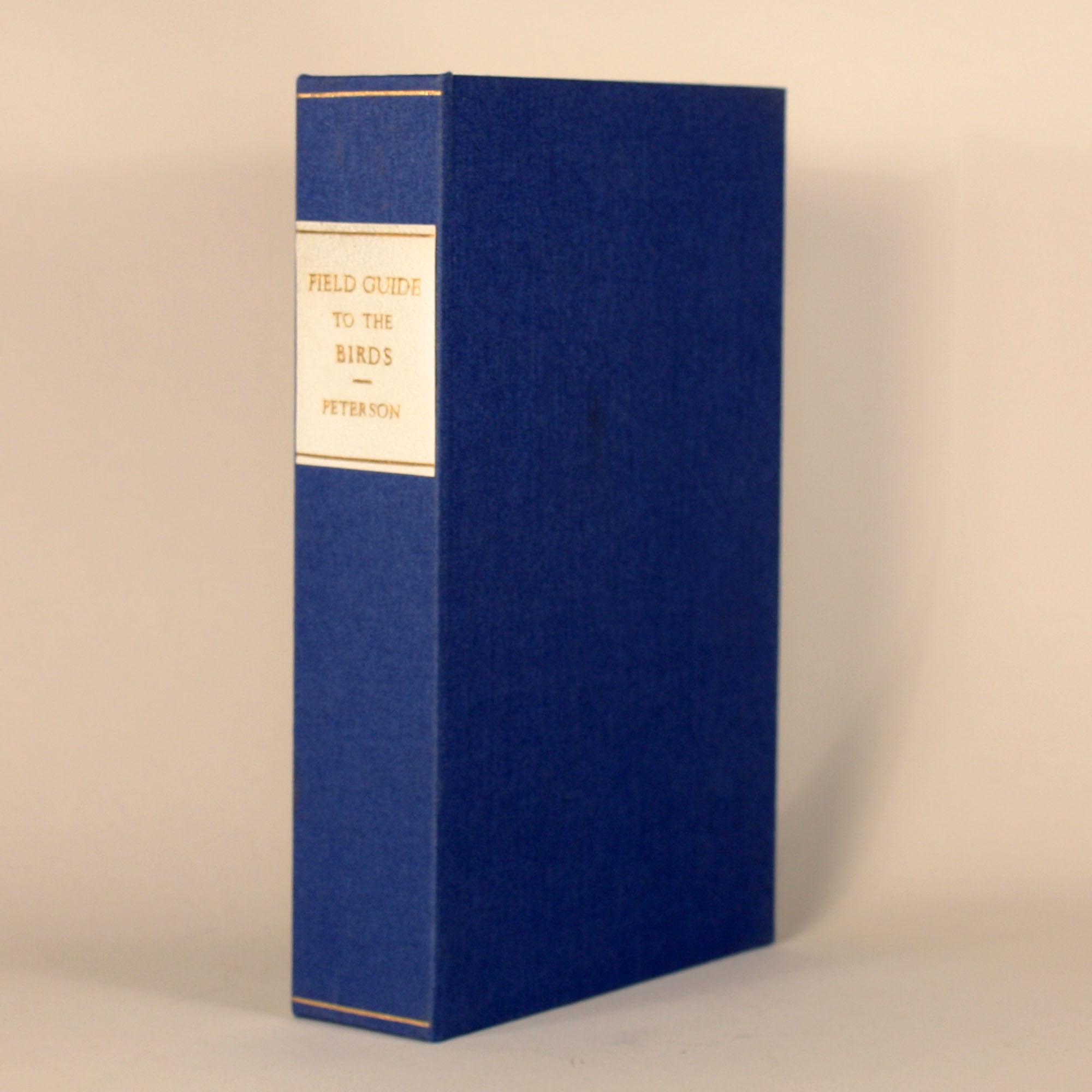 Peterson, Roger Tory.  A Field Guide to the Birds, giving field marks of all species found in eastern North America. Boston: Houghton Mifflin Company, 1934. First state of the first edition, with all points (date to title page, "Bob-pumper" in index, etc.), boldly signed by the author in an early hand. One of only 2,000 copies issued. Ownership signature of Julia M. Shipman, Enfield, New Hampshire, dated June 1934. Very good or better in a dustwrapper that has seen some light restoration by a professional conservator.

The most influential naturalist guide published in the twentieth century, redefining how information is displayed, arranged, and communicated.  Describing nearly five hundred species of bird with field marks observable from a distance, Peterson drew upon earlier guidebooks (most notably those of Frank M. Chapman and Ralph Hoffmann) and the expertise of what he described as a "fraternity" of bird lovers, but the remarkable arrangements that have made this portable guide so enduring through the decades are his alone. Particularly significant was his system of "identification by elimination," the practice of narrowing the possibilities by considering the range, the season, and the broad shape of the species. As Douglas Carlson notes, Peterson made frequent use of the word "only" to focus attention. The yellow warbler is "the only small bird in the field that appears to be all yellow" The barn swallow is "the only native Swallow that is really 'Swallow-tailed," etc. The arrow to indicate the telling detail is perhaps his most effective innovation for the field naturalist.

The first edition differs significantly from later ones, with 26 highly simplified and rather crude black and white plates executed in Chinese ink, and only four color plates. Stylistically, these were a far cry from his later artistic achievements. "I shudder every time I look at that first edition," Peterson later wrote. "The drawings are horrible -- crowded, hunched-up little figures."  Soon after the first edition hit the stands, he began work on a thoroughly revised guide with much improved artwork that he would publish in 1947.

Getting the first edition published was no easy matter. In 1934, America was in the depths of the Depression, and a book with plates was expensive to produce. Four publishers turned Peterson down before Houghton Mifflin accepted the manuscript. The book received glowing reviews that identified it as an indispensable resource for amateur ornithologists, and the two thousand copies of the first edition sold out almost immediately.

The present example is one of the earliest copies sold, featuring all of the points that mark the first state of the first edition, including a date on the title page, tissue guards for the color plates, the misprint "bob-pumper" (instead of "bog-pumper") in the index, and grey plumage in the illustrations of the Whistling Swan and White Egret opposite pages 12 and 18. Intended for use in the field, the book was bound in durable materials, but the dustwrapper usually perished.  A 1986 census estimated that only perhaps five to ten examples of the jacket have survived. The present copy, though imperfect, is very presentable indeed. Peterson's bold autograph on the title page, executed in fountain pen, makes this far and away the best copy of this rare and important book that we have ever seen on the market.