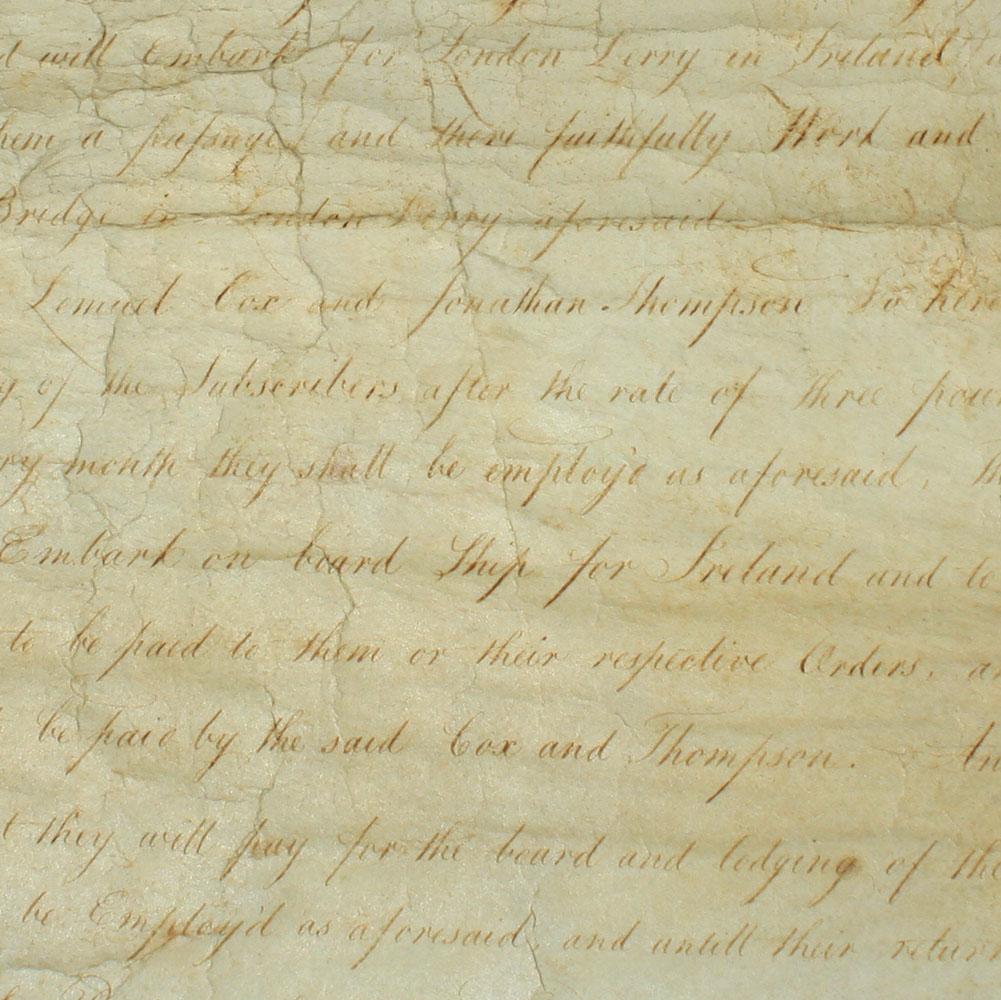 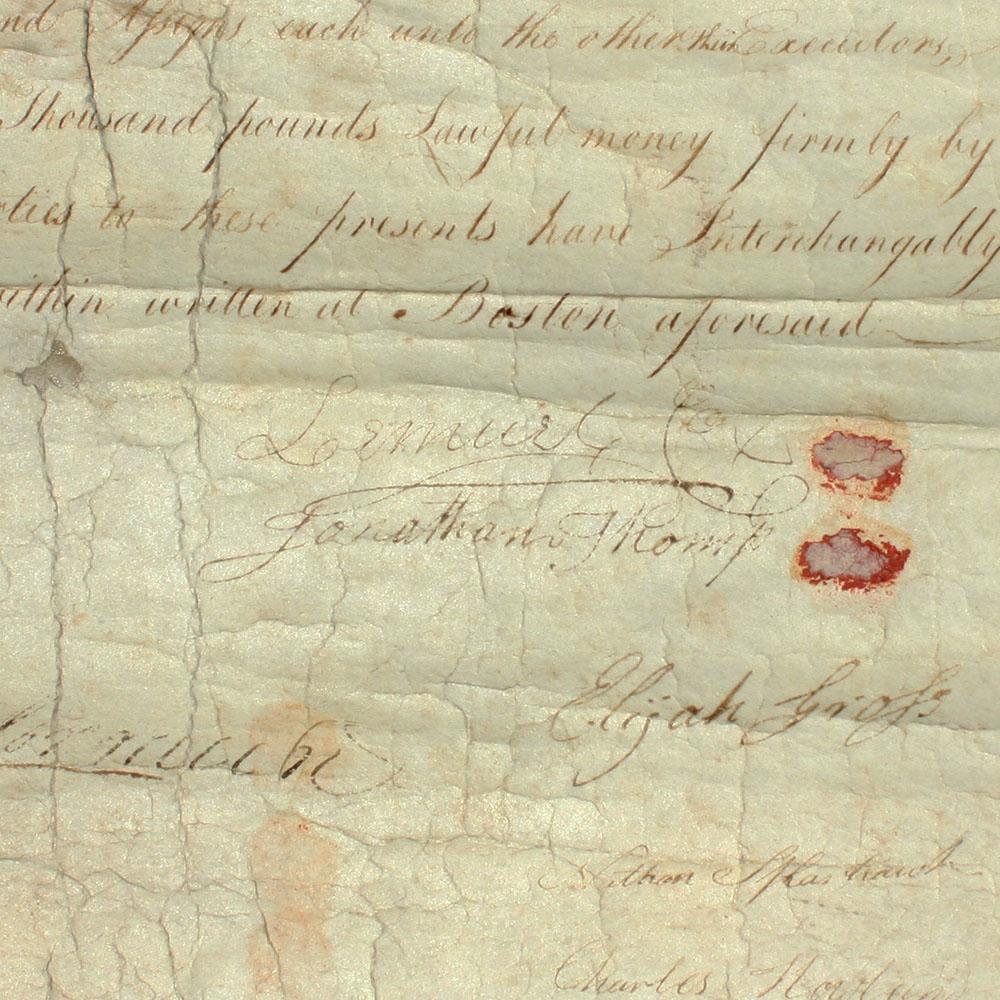 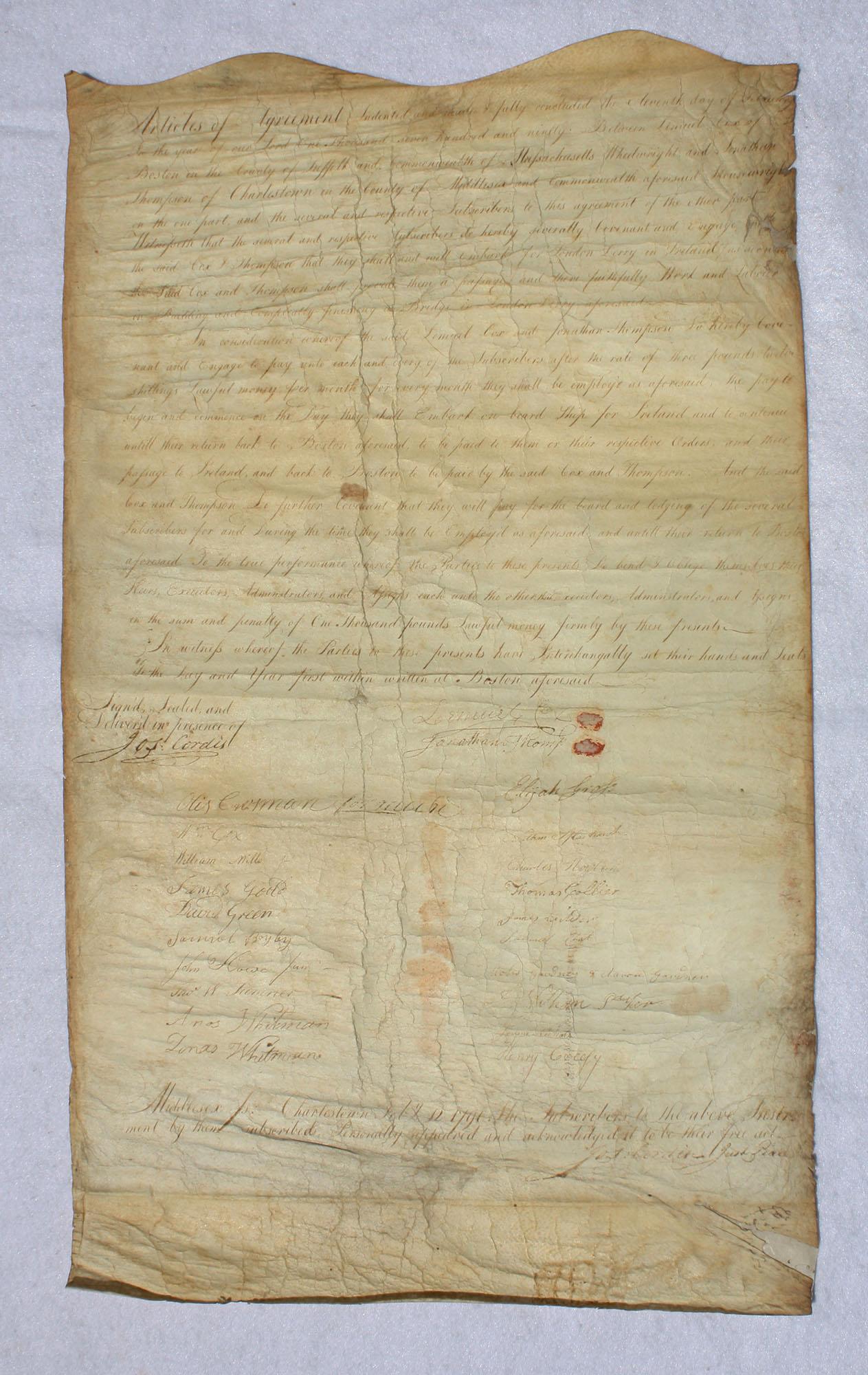 The original contract, signed by Cox, his partner, and twenty laborers, for the construction of the Londonderry bridge across the river Foyle, the first of seven bridges he would build in Ireland between 1790 and 1796, and a landmark of civil engineering. Historians have singled out for praise “the stupendous role of Lemuel Cox in the history of Ireland’s road bridges and his great technical ability, ingenuity, and competence, both as a designer and contractor” (O’Keefe et al., 318). They have also lamented the dearth of primary materials. “He left no journals, social commentary or architectural notes,” writes one historian, “yet the number of bridges that he designed and built in Ireland should have sustained his fame” (Browne, 106). In America, Cox was celebrated for another engineering feat, a bridge spanning the river Charles. This document offers much to supplement the historical record on an important transatlantic figure. 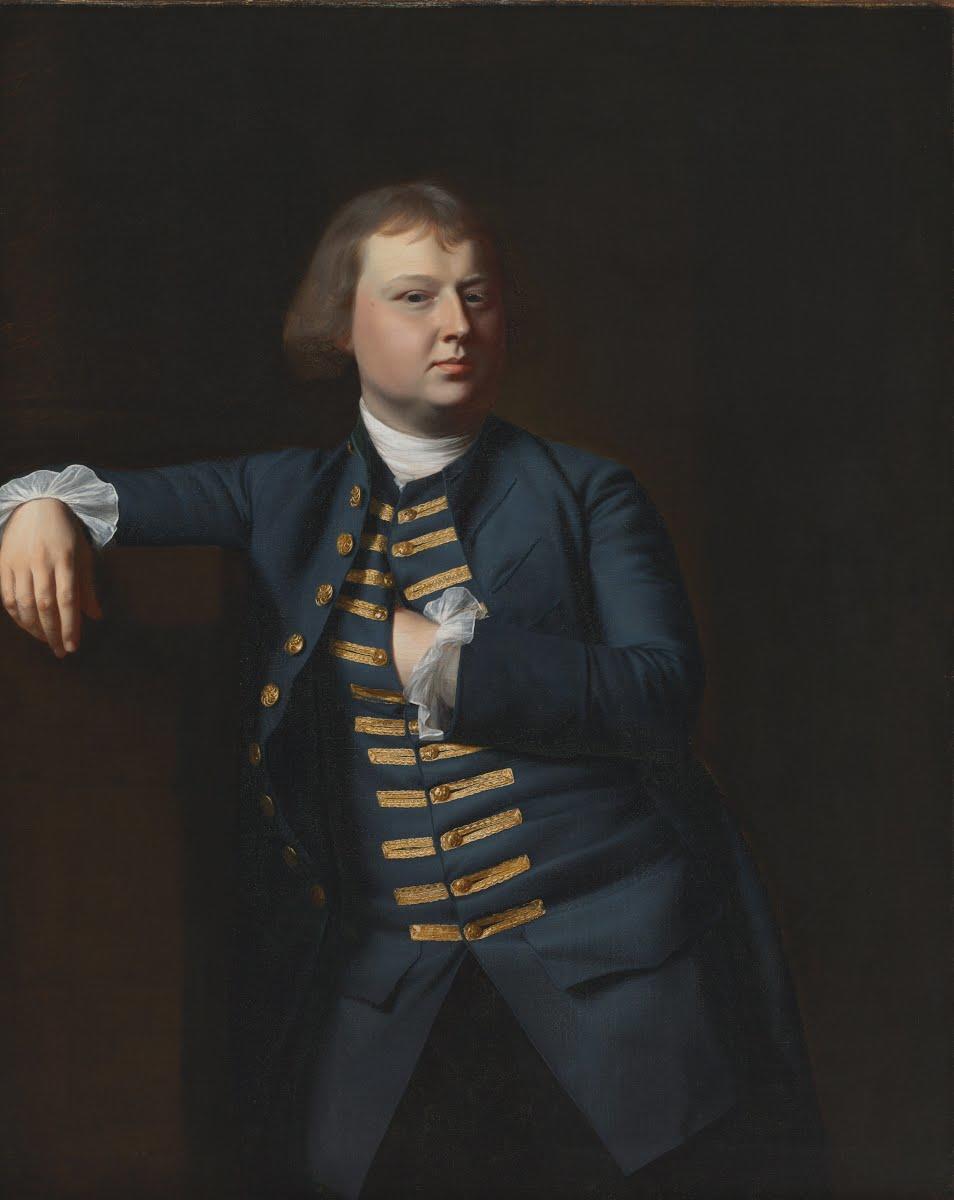 Born in Dorchester, Massachusetts, Lemuel Cox is identified in early records, and this document, as a wheelwright – in other words, a craftsman working in timber – and an inventor. In 1775, he was imprisoned as a Loyalist. But the following year he helped build the first powder mill in Massachusetts, constructed to supply Washington’s troops. He also invented machines to produce wire, and pursued other enterprises recorded by his biographer, Walter Kendall Watkins.

In 1785 John Hancock tasked Cox with the construction of the Charlestown Bridge, which was at the time the longest bridge in the world, and a considerable feat of engineering. “To build such a bridge at such length over water up to 42 ft. deep at highest tides was unprecedented,” notes one historian (Ruddock, 151). “His plan was by some supposed to proceed from a distempered brain,” recalled a British traveler who met Cox in 1796. “It is usual for the ignorant to call a projector insane, when his schemes exceed the bounds of their shallow comprehensions” (Priest, 161-162).* Caleb Snow proclaimed at the time that the Charlestown Bridge “was considered the greatest event that had ever been undertaken in America” (Snow, 316). When the bridge opened in 1786, Cox’s contemporaries celebrated his achievement:

And roast a fatted Ox

To toast our patriot Cox. 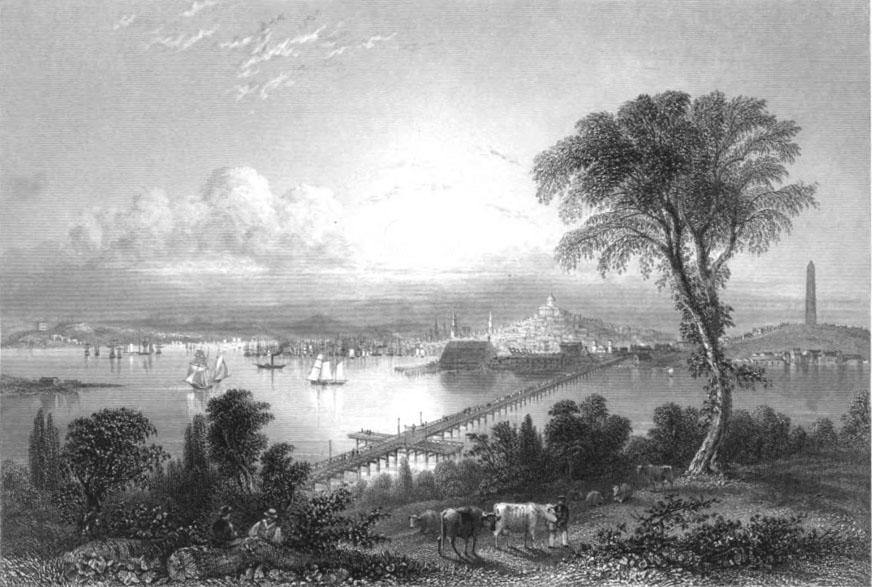 Cox brought novel approaches to problems in civil engineering. “He always constructs his bridges of wood, and endeavours to give as little resistance to the water as possible,” explained one acquaintance. “His supporters are numerous, but slender; and there is an interval between each. He tells me this idea first struck him from reading Aesop's fable of the Reed and the Oak: the reed, by yielding, was unhurt by a tempest, which tore up the sturdy oak by the roots” (Priest, 191). In 1790, Secretary of State Thomas Jefferson wrote to Benjamin Vaughan to describe a meeting with Cox (“a spring of invention beyond my conception”) and recount the engineer’s method of preserving the piles from shipworm: having examined the planks of whaling ships, “he took the idea of impregnating the timber of his bridges thoroughly with oil, by heating the timber as deeply as possibly, and doing it well in that state with the liver oil of the codfish,” Jefferson explained (16: 579-580).

As Cox built additional bridges in Massachusetts, his fame spread. Probably in the spring of 1789, Cox met with members of the Corporation of Derry to discuss construction of a bridge across the river Foyle, a project that had been contemplated since 1769 but not authorized until 1786. The Irish Parliament passed an Act (30 Geo. III c.31) to authorize the expense.

With his partner, Cox embarked on a ship from Sheepscot, Maine, with a load of oak piles and twenty skilled workers. Work on the bridge began on 3 May 1790, and was completed thirteen months later. An 1837 account describes the structure (after its repair in 1814 following damage from ice floes):

The bridge is 1068 feet in length and 40 in breadth; the piles are of oak, and the head of each is tenoned into a cap pier 40 feet long and 17 inches square, supported by three sets of girths and braces; the piers, which are 165 feet apart, are bound together by thirteen string-pieces equally divided and transversely bolted, on which is laid the flooring: on each side of the platform is a railing 4½ feet high, also a broad pathway provided with gas lamps. (Lewis, 2:300-301) 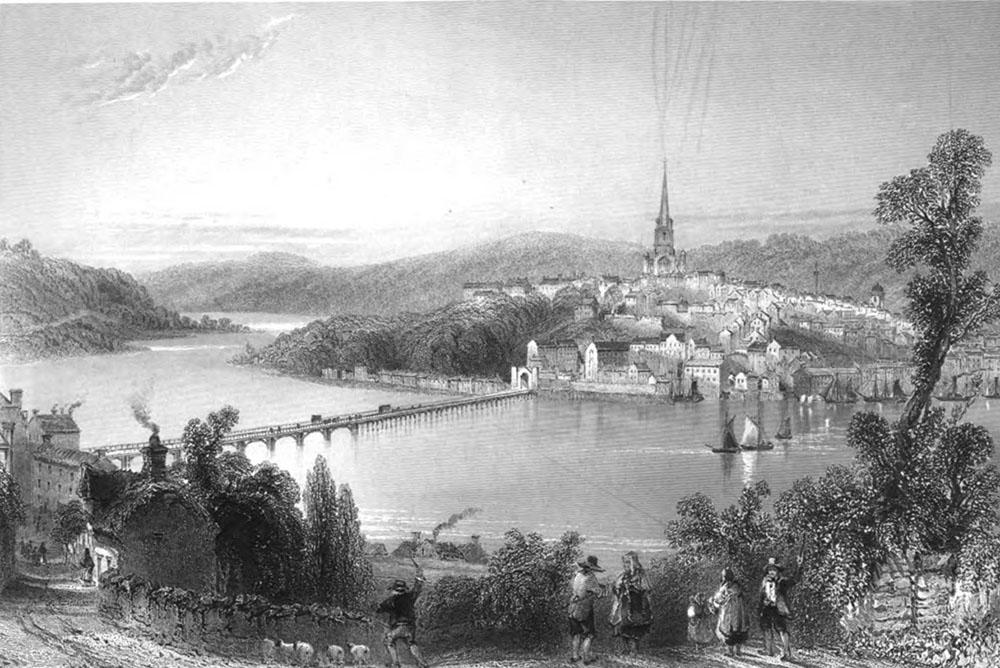 Even though the project ran over budget – Cox had estimated £10,000, but the expense turned out to be £16,594 -- the Londonderry council awarded him a bonus of £100 “as a mark of their approbation of the eminent abilities of this truly ingenious Artist” (American Intelligence, 1). Several American periodicals reprinted an article from an Irish newspaper:

The citizens of Derry have voted Mr. Cox, the builder of their bridge, a Gold Medal, value fifty guineas, with a perspective view of that city on one side, and the following inscription on the other: -- “To Lemuel Cox, of Boston, in America, the builder of the bridge of London-Derry (a work for magnitude of design, and simplicity of construction, unparalleled in the eastern world) the gentlemen of Derry, in token of their value for his abilities, have presented this medal, July 22, 1791." (American Intelligence, 2)

The present document constitutes the original contract for staffing that historic project. It is witnessed by Joseph Cordis (1743-1811), a shipbuilder and merchant, in his capacity of Justice of the Peace of Charlestown, which today bears a street named in his honor. It augments the record in significant ways. First, it reveals the identity of Cox’s partner. History has recorded Cox as the senior principle of the firm of Cox & Thompson. We can now recognize the latter as Jonathan Thompson (1745-1796), a housewright in Charlestown, Massachusetts. Thompson’s death in 1796 might explain why Cox apparently accepted no further commissions after that date. We also learn about the costs and conditions of skilled labor during this period of rapid economic expansion in the United States and Europe. The workmen were offered very generous terms indeed -- £3 12s. per day from the point of embarkation, plus passage, room, and board.** Most importantly, the document reveals the names of the twenty American craftsmen who went to Londonderry. The great likelihood is that these men had worked with Cox on earlier projects, perhaps even the Charlestown bridge, and they offer directions for further research on the history of engineering in Boston and Ireland at the turn of nineteenth century. One of the workers, Cox’s son William, would marry an Irish lass in 1794, presumably in the context of another project, and it is possible that other members of the crew also established local connections in the Emerald Isle.

“There is certainly no doubt that the American carpenter had constructed one of the finest bridges of his day,” observed one member of the Institution of Civil Engineers of Ireland in 1930, “and if an account of his works was put together it would form a gracious acknowledgement of his valuable services to Ireland and to the profession” (quoted in O’Keefe et al., 322). This document will do much to further that historical project.

* It is possible that the rumors about Cox’s “distempered brain” reflected not only the mad genius of his scheme but also peculiarities of behavior. As an Irish observer noted in 1794, “To great natural mechanical abilities, Mr. Lemuel Cox added great eccentricities of character” (Douglas, 206)

** Further testimony to the value of labor: In 1794, Cox would be arraigned in Dublin for attempting to entice Irish tradesmen to emigrate to America, a crime punishable by a £500 fine and up to 12 months imprisonment. He was acquitted.