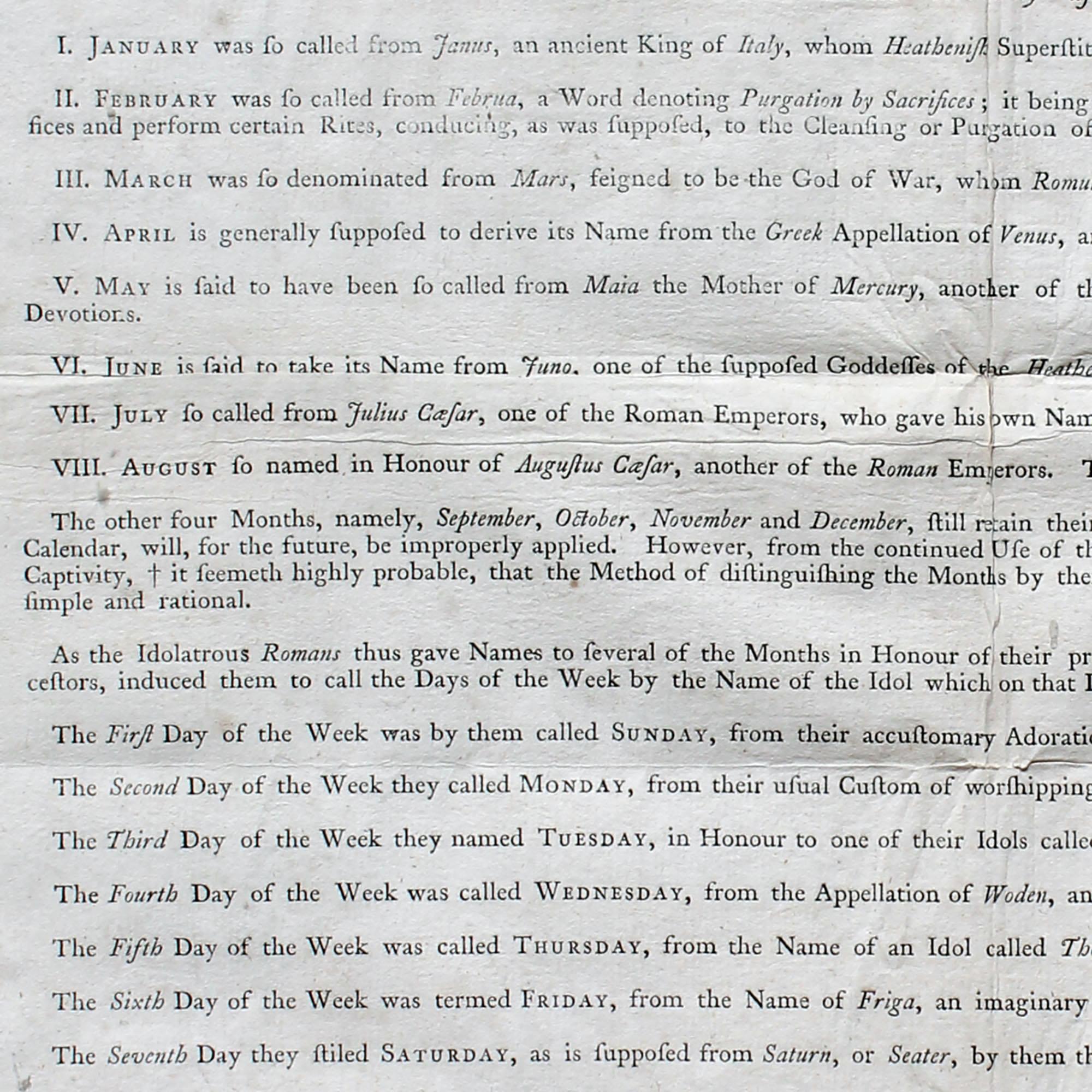 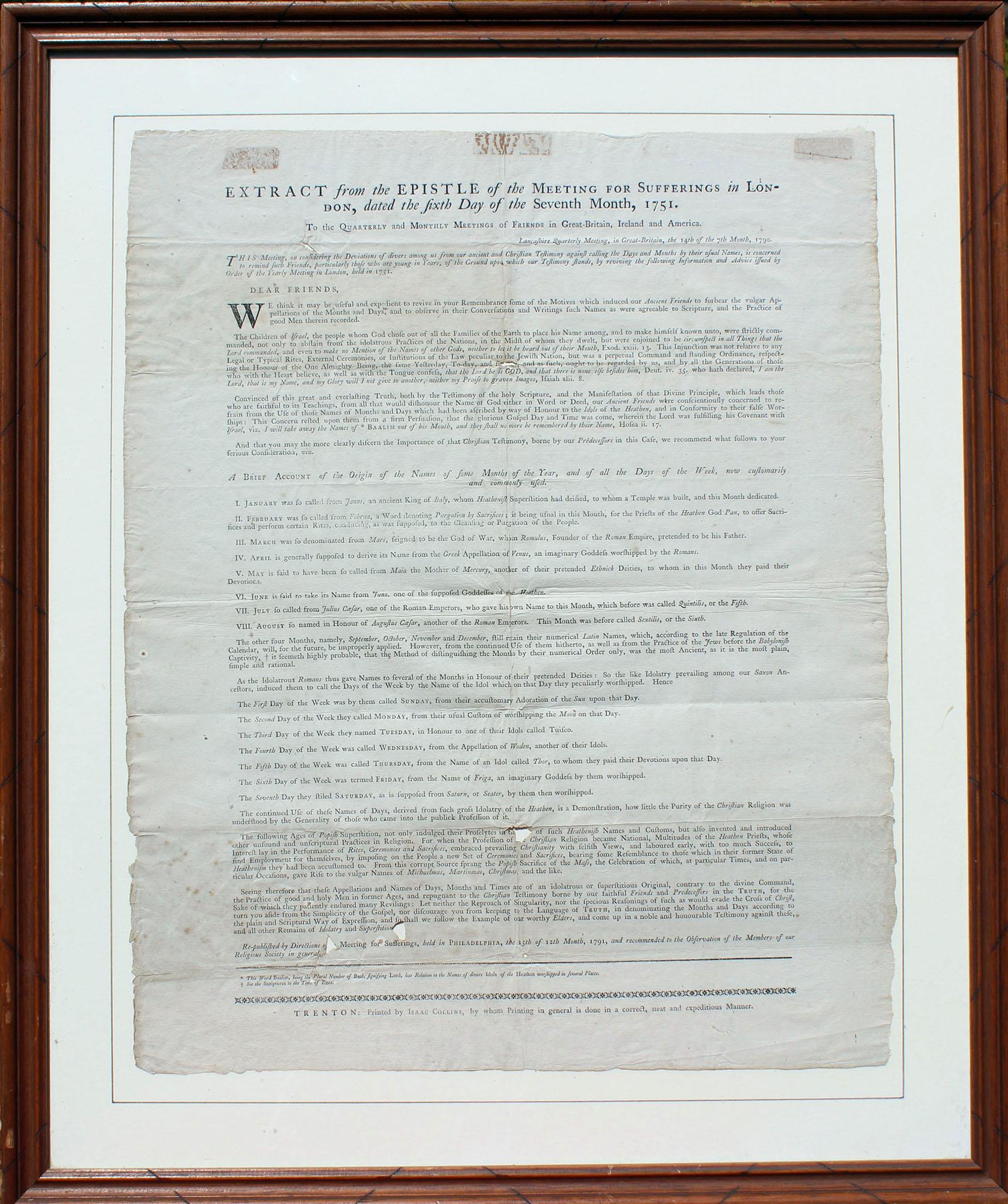 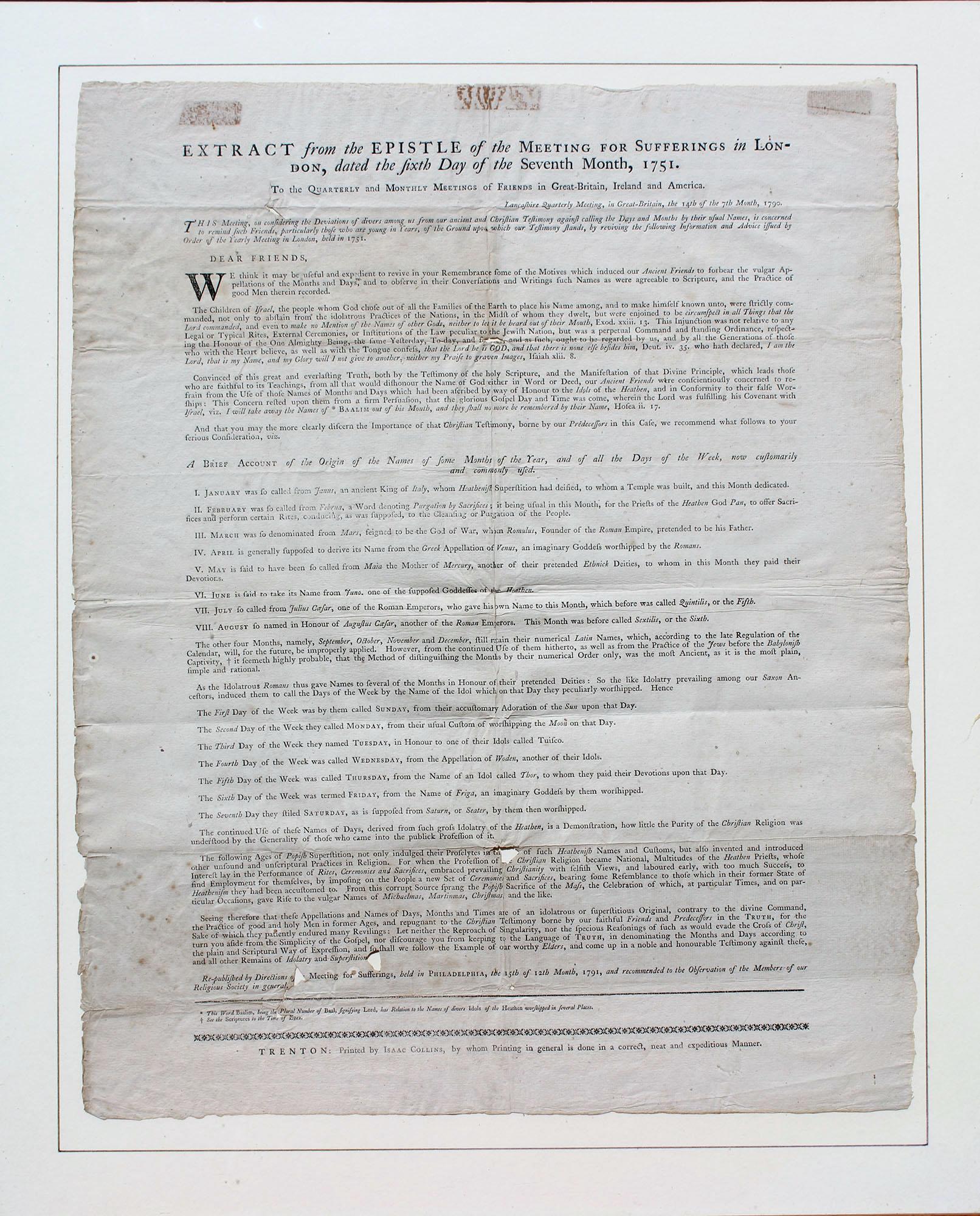 Extract from the epistle of the Meeting for Sufferings in London, dated the sixth day of the seventh month, 1751. To the Quarterly and Monthly Meetings of Friends in Great-Britain, Ireland and America. Lancashire Quarterly Meeting, in Great-Britain, the 14th of the 7th month, 1790. Trenton: Printed by Isaac Collins, [1791]. Broadside, 56 x 45 cm., housed in glass-fronted frame; a few small holes at folds, 3 cello tape marks on verso of top margin, generally sound otherwise. Evans, 23393; Felcone, Printing in New Jersey 591.

A gloriously intemperate broadside explaining for the benefit of young Friends the decision taken in 1751 “to forbear the vulgar appellations of the months and days” out of observance of the biblical prohibition against idolatry. The authors observe that in pagan times, months were named after such Greek and Roman figures as Janus, Mars, and Julius Caesar, and days after Saxon deities, including the moon, Thor, and Saturn. These “heathenish names” flourished through “the following ages of Popish superstition.” Further, note the authors with blithe logic, “from this corrupt source sprang the Popish sacrifice of the Mass,” which lent its name to such unacceptable days as Michaelmas and Christmas. These pagan remnants being “repugnant to the Christian testimony borne by our faithful Friends and predecessors in the Truth,” Quakers should “come up in a noble and honorable testimony against these and all other remains of idolatry and superstition.”

Promulgated first in London, this broadside was published in Trenton by Isaac Collins, “by whom printing in general is done in a correct, neat and expeditious manner,” as noted in the colophon. Collins is best revered for his production of the first family bible published in America, published in 1791, the same year as this broadside.

One would think from WorldCat that copies of this broadside are more common than paperbacks by Stephen King, but in fact the vast majority of recorded examples are poorly photographed microform copies, which are a poor substitute for this strikingly printed original.

Hicks, Elias (1748-1830). A collection of extemporaneous discourses, delivered by Elias Hicks, in his tour through Dutchess County, during the summer ... view details
$1,250
View details
add to wishlistADD TO YOUR BASKET

Farrer, William (1738-1826) A Journal of a Religious Visit to Germany &amp; Holland by William Farrer as Companion to David Sands in Company with Will... view details
$8,750
View details
add to wishlistADD TO YOUR BASKET