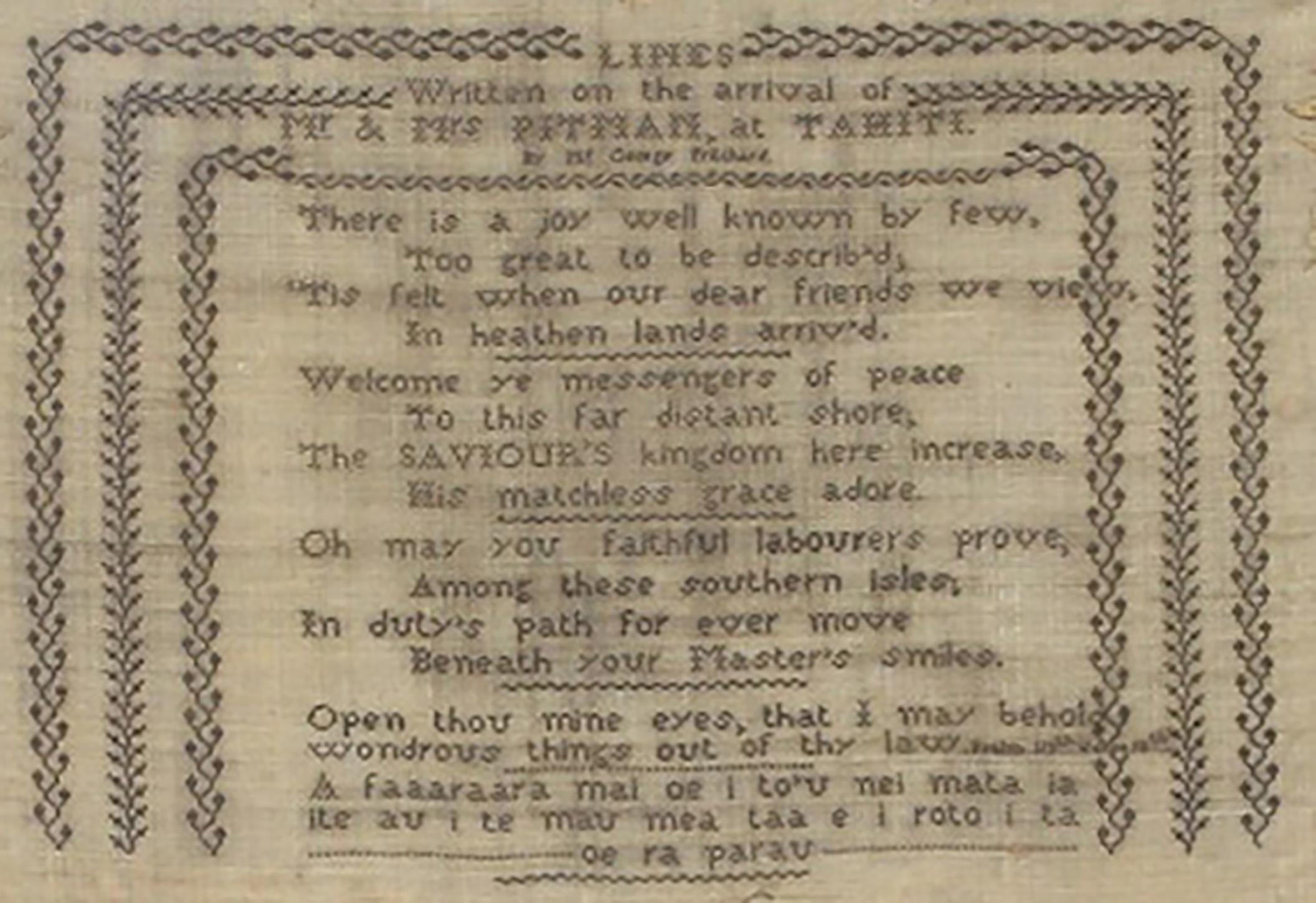 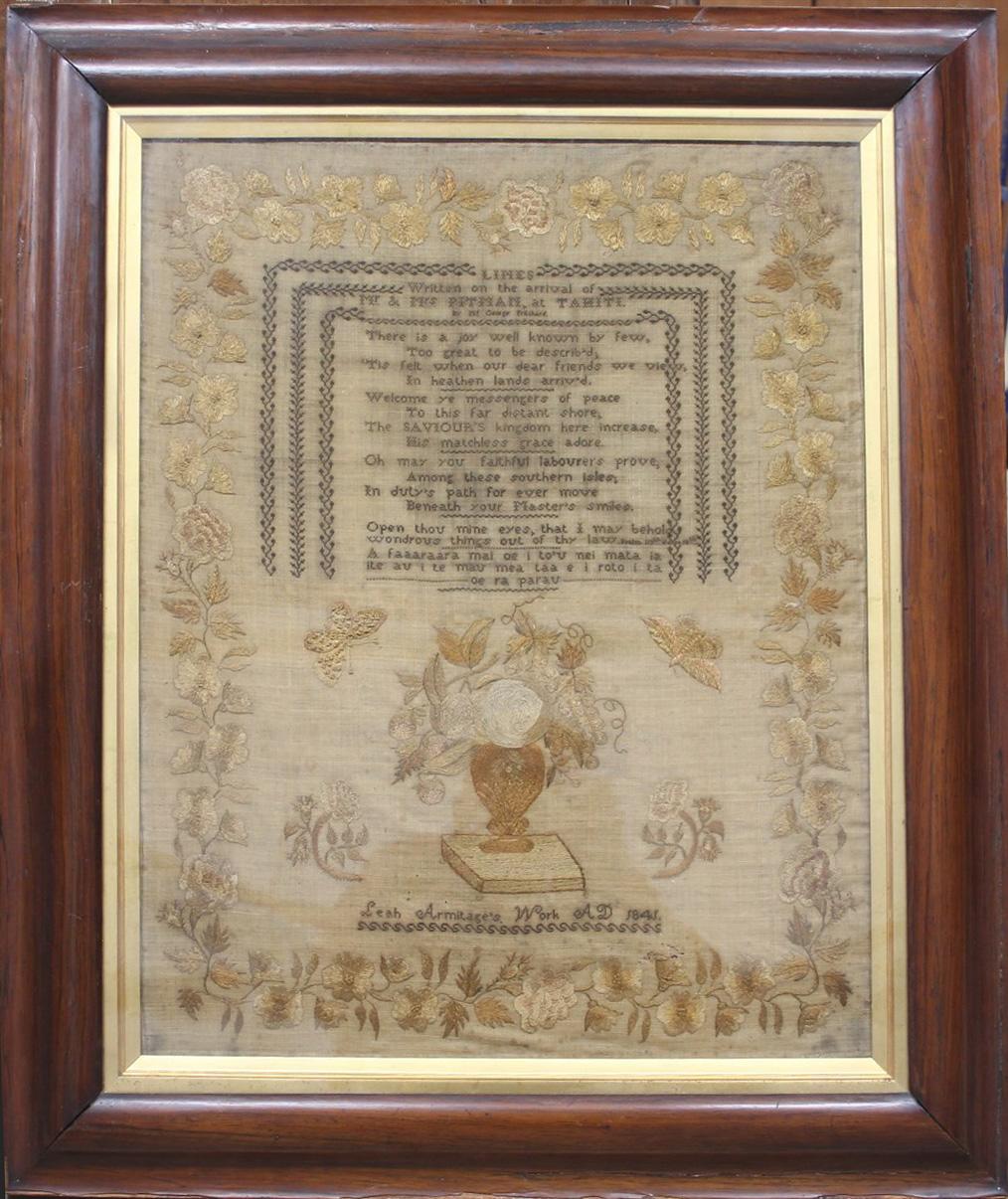 The author of the poem is George Pritchard. An emissary of the London Missionary Society, Pritchard first traveled to the Society Islands in 1824. His memoir is a key document for the history of the region. In 1837, he was appointed British consul at Tahiti. Pritchard encouraged Queen Pomare IV’s defiance against the French, who imprisoned him during the French-Tahitian War and expelled him from the islands. He returned to the Pacific in 1845 as British consul at Samoa, and lived there until his retirement in 1856.[1]

The artist was Leah Armitage, born around 1828 in Rarotonga. She was the daughter of Elijah Armitage (b. 1780), an artisan from Failsworth, Lancashire, who traveled to the islands with his wife and two elder children on the whaler Tuscan in 1821. He first settled in Papetoai, Eimeo (now Mo’orea), traveling with another artisan, Thomas Blossom. Armitage’s father was a cotton manufacturer in Manchester. With Blossom, Armitage oversaw the construction of mills, houses, and other buildings in different settlements on the island. In 1833, they moved to Rarotonga. The Armitages returned to Salford, Lancashire, in 1835. 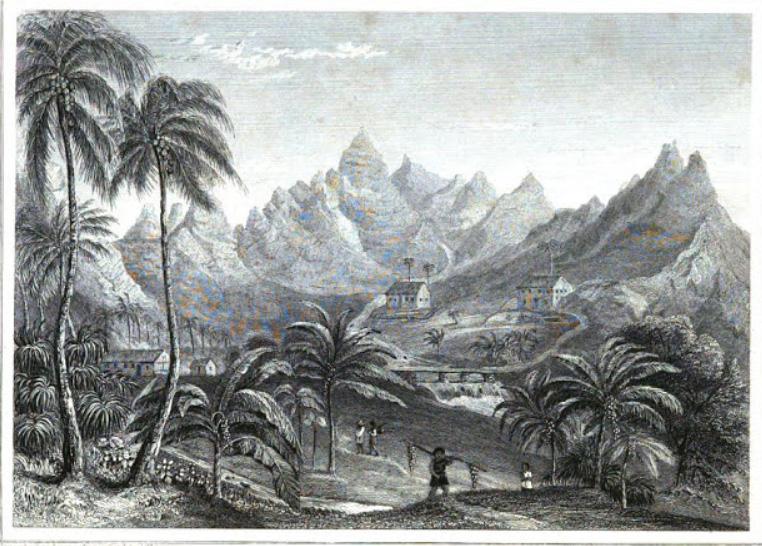 Missionary settlement in Eimeo (or perhaps Rarotonga). Cotton factory at lower left. The Armitage house is one of the two at center right

Sunderland gives an extensive account of the endeavors of Leah Armitage’s father to introduce crafts – and respectable attire – to the islanders:

Mr. [John] Williams brought to Rarotonga a Mr. Elijah Armitage, who came out at the instigation of the directors of the London Missionary Society, with the intention of teaching the Tahitians to spin and weave cotton. He had not succeeded there from various causes, and Mr. [Aaron] Buzacott, seeing the difficulty at that period of getting sufficient clothing for the people, was anxious that the experiment of weaving should be tried.

Together, Armitage and Buzacott built looms, and met with some success. According to the Missionary Society’s report, by the end of 1833, “four pieces of cloth, two of which were upwards of fifty yards, had been wove, and the fourth entirely by natives.” By the end of 1834, Armitage reported upwards of 330 yards of cloth, noting that “the Chief at Avarua seldom wears any other clothes than those manufactured in the island.” As Armitage’s young daughter, Leah undoubtedly learned to weave alongside the native women, and the course cloth used for the sampler is very likely homespun. The decorative embroidery featured on the sampler was another one of the domestic skills commonly taught as part of the civilizing process.[2]

Pritchard’s poem honors Charles Pitman of Portsmouth and his wife Elizabeth, who decamped to Tahiti shortly after their marriage, arriving on 31 Jul 1825. Like the Armitages, the Pitmans came through the agency of Rev. John Williams. Although he pursued his missionary endeavors on several islands, including Raiatea, Tahaa, Ngatangiia, and Mo’orea, he is most closely associated with Raratonga, which he visited several times before settling there from 1836 until his retirement in Sydney in 1854. The Pitmans were the first foreigners to settle on Raratonga. He preached his first sermon in the Rarotongan language in August 1827, and with Williams and Buzacott translated the bible into that language. Accounts of missionary life in the islands speak of the Pitmans having frequently to withstand hostile crowds, tempestuous weather – hurricanes and fires – debilitating illness, and other adversities, though not so terrible as that suffered by Rev. Williams, who was killed and eaten while on a mission to Erromango. His obituary notes rather paradoxically that Pitman “had always been considered a feeble man, but appears to have been possessed of great vitality.”[3]

Pritchard references Pitman frequently in his memoir of missionary life in the Cook Islands, quoting from him at length. Pritchard recounts Pitman’s close relationship with his native assistants, Tupe and Maretu, and a trip Pitman and his wife took to Mangaia. He describes a visit to Pitman’s school at Ngatangiia, “where I found about 1000 children assembled, and orderly arranged in classes.” The school was built of coral, and probably by Armitage, who was stationed there with Pitman.[4] 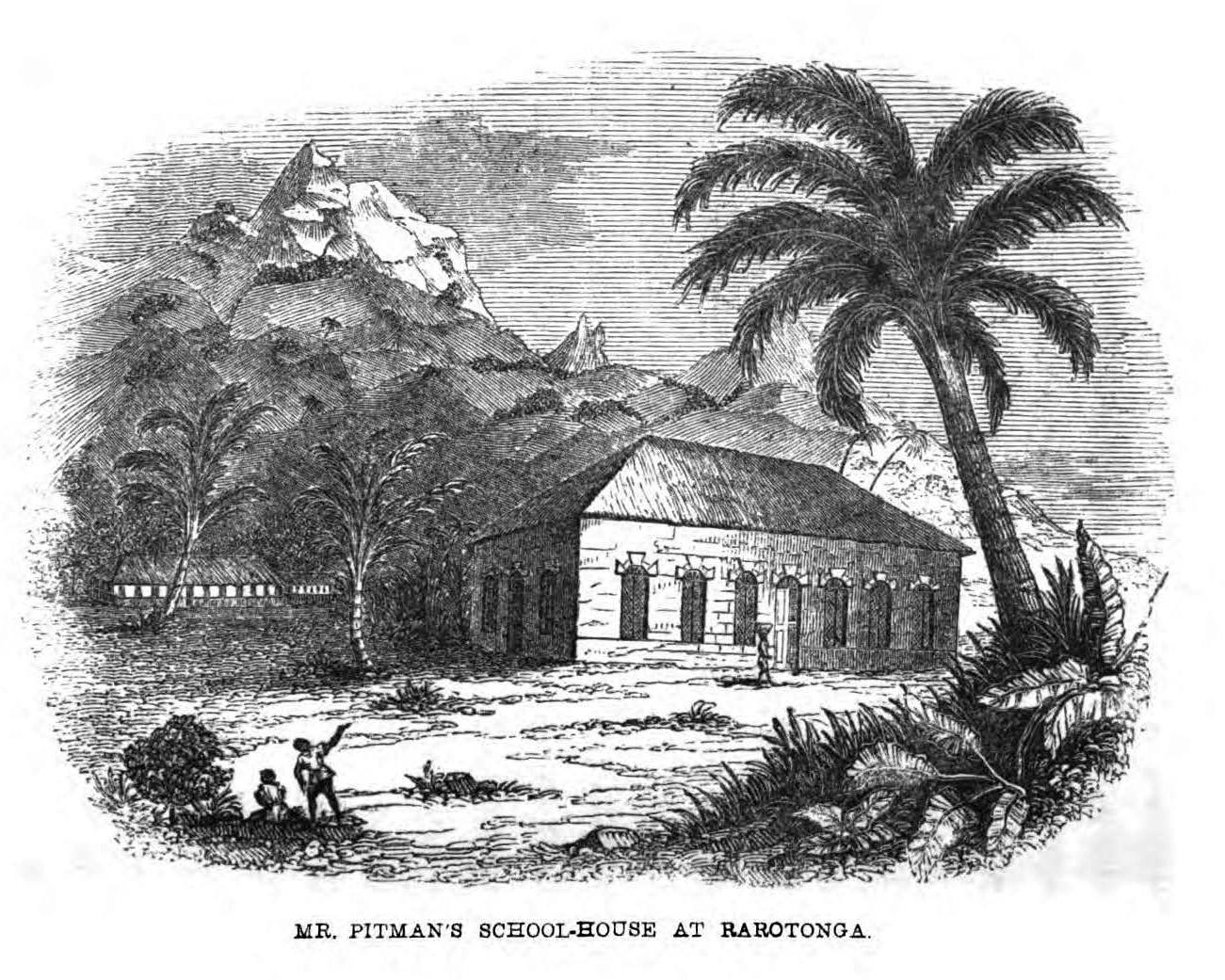 We have been unable to find a printed reference for the poem here presented, which speaks candidly of the “joy well known” by Europeans stationed “in heathen lands” upon encountering their countrymen in “these southern isles.” The sense of cultural isolation expressed in these verses is mitigated by the quotation that follows the poem, written first in English and then in Tahitian: “Open Thou mine eyes, that I may behold wondrous things out of Thy law” (Ps. 119:18), a remarkable juxtapositioning which here may be understood as a missionary’s prayer for bridging the cultural gap that separates him from his unfamiliar surroundings.

[1] George Pritchard, The Missionary’s Reward; or, The Success of the Gospel in the Pacific (London: John Snow, 1844) discusses Christian life on the island. For his political career, and especially his conflicts with the French, see the memoir by his son, W. T. Pritchard, Polynesian Reminiscences; or Life in the South Pacific Islands (London, 1866), Ch. 2; Léonce Jore, “George Pritchard, l’adversaire de la France á Tahiti, 1793-1883,” Revue d’Histoire des Colonies Françaises, iii (1939). Pritchard, Armitage, and Pitman are all treated at length in Niel Gunson, Messengers of Grace: evangelical missionaries in the South Seas, 1797-1860 (Oxford UP, 1978)

[4] George Pritchard, The missionary’s reward; or, The success of the Gospel in the Pacific (London: John Snow, 1844), p. 135. Illustration at p. 136; Report of the Directors to the Forty-First General Meeting, p. 125. Maretu’s history of the missions has been masterfully edited by Marjorie Tuainekore Crocon as Cannibals and Converts: Radical Change in the Cook Islands (Institute of Pacific Studies, 1983).