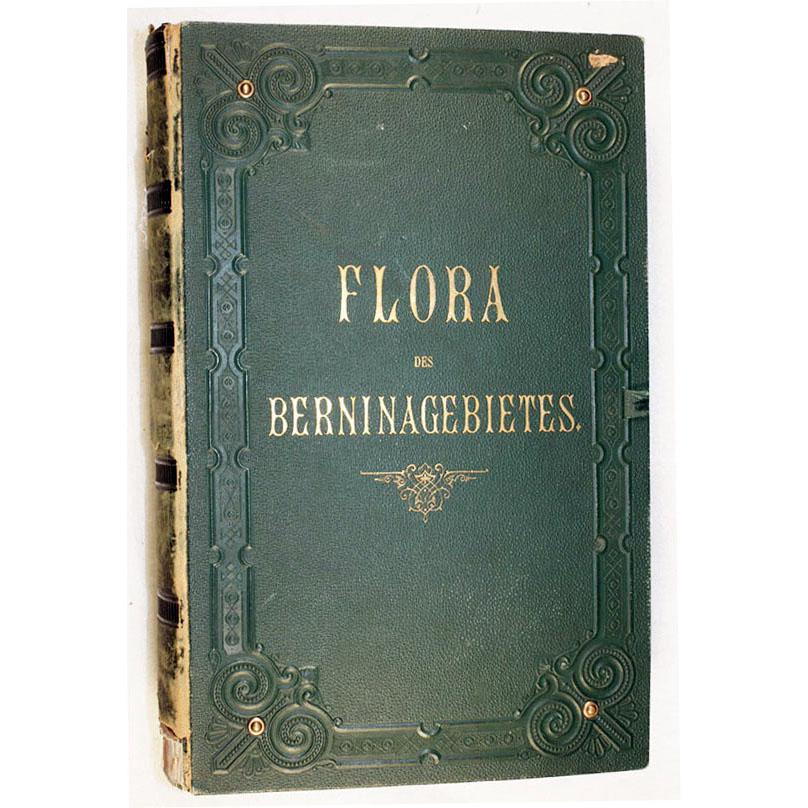 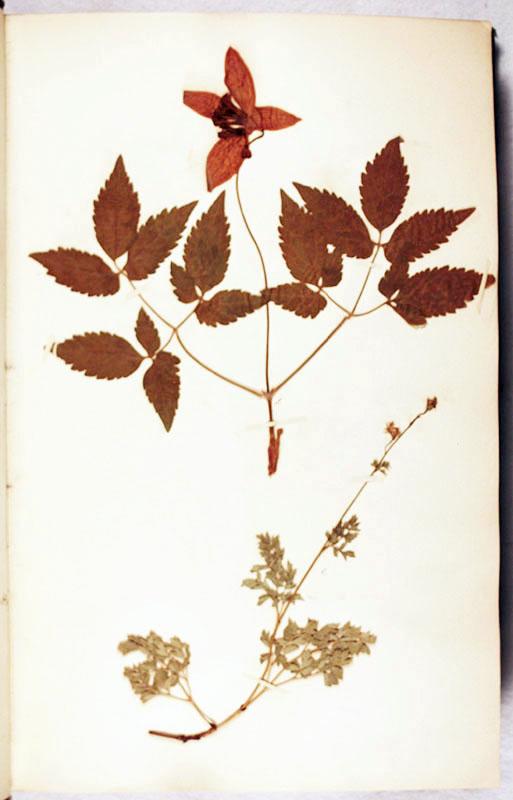 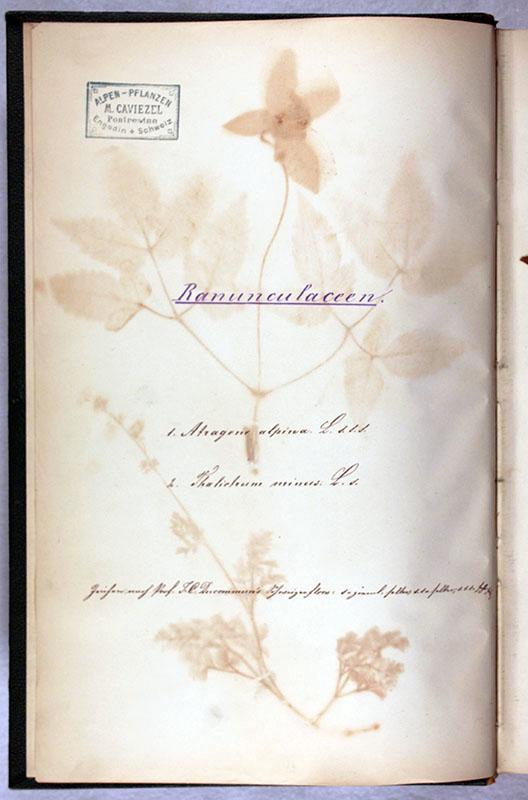 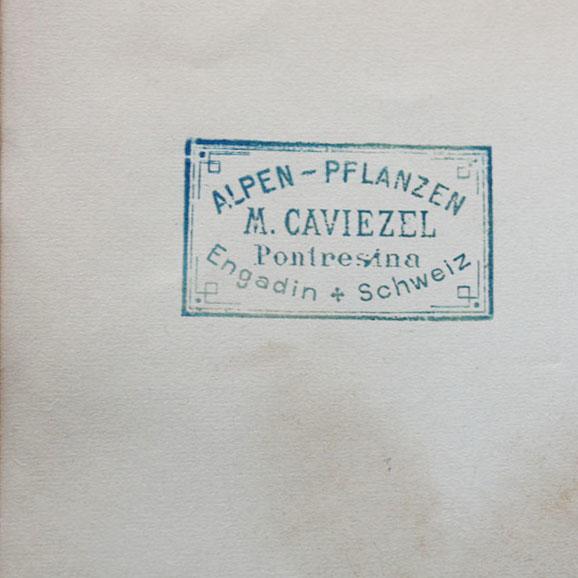 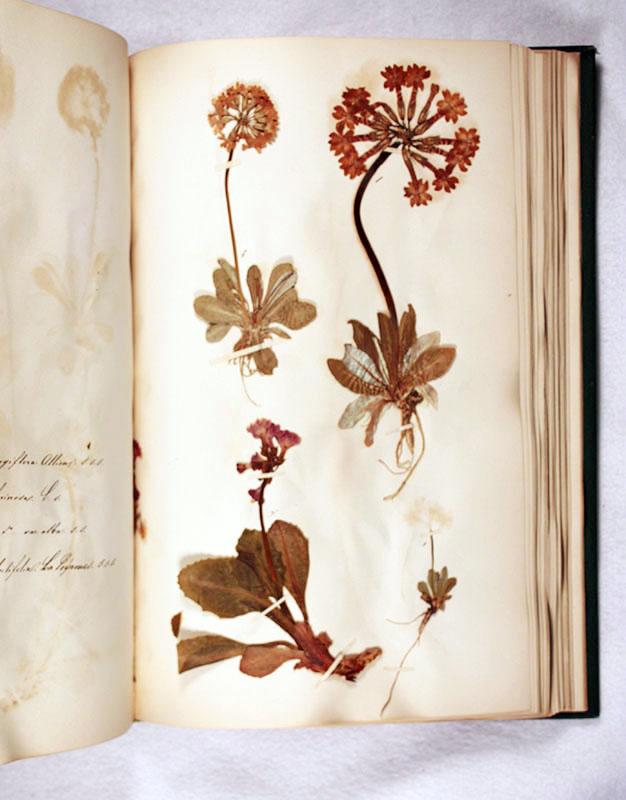 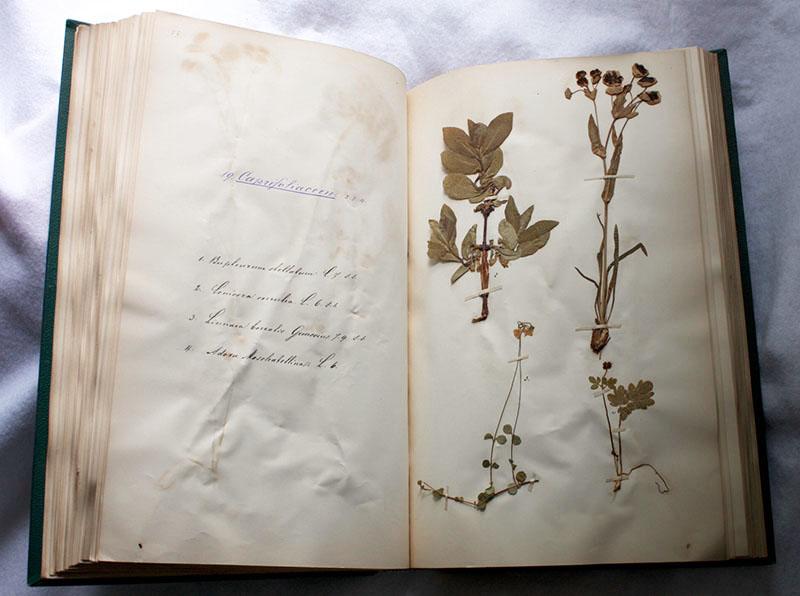 A comprehensive collection of the flora of the Bernina mountain range, comprising 151 leaves, each mounted with between two and five specimens, neatly annotated with botanical names, collected and arranged by an authority on the region. With the compiler’s stamped label: “Alpen-Pflanzen. M. Caviezel. Pontresina. Engadin, Schweiz.”

The Bernina range of the Rhaetian Alps are the highest mountains of the wider area of the Engadine region in southeastern Switzerland, with Piz Bernina, standing at 4,049 m (13,284 ft) its loftiest peak. The Engadine was cherished (in the words of the Cambridge botanist Charles Edward Moss) as “one of the richest floristic grounds in Europe.” The present herbarium offers a reliable historical plant record of this diverse local biosystem now threatened by climate change.

Michael Caviezel, a teacher and forest warden in Pontresina, was preeminent among the Engadine’s native sons, and bore witness to the swift changes in the region.  As a reviewer in TheSpectator noted, “this charming Swiss valley, so healthful in its climate, so favoured as to scenery, so fortunate in the varied attractions which it has to offer, was, previously to the year 1858, almost unknown to the general public.”  Once it attracted the attention of mountaineers, botanists, butterfly collectors, and medical professionals, however, things changed. By 1877, Caviezel noted “the complete alteration of the conditions of life [in the Engadine] caused by the influx of foreigners.”

However unfortunate the losses to local culture, Caviezel profited from them.  Indeed, he did much to shape the trade in Alpine tourism. His Tourist's Guide to the Upper Engadine, first published in German in 1876, was reviewed glowingly. The Saturday Review observed that in contrast to the Baedeker guides, Caviezel’s text “implies that the tourist in the Engadine, whatever may be his peculiar bent, will be a cultivated man, not a mere walker, a mere mountain climber, a mere eater and drinker, above all, a mere chafferer over hotel prices.” His text described local flora, fauna and folkways in glowing detail, while not ignoring the considerations that attracted people to the healthful Alpine airs – the 1886 edition of his guide was retitled The Upper Engadine: A Guide for the Sound and for the Sick.  His book remained in print in English, French, and German through the 1920s.  In addition to offering tours, Caviezel sold souvenirs and rented furnished apartments to travelers.

But botany was Caviezel’s real passion. A 12-page appendix to his Tourist's Guide offers a list of the key species found in the Engadine, and substantial passages exult in the floral riches of his native land:

Can any region surpass the Engadine in beauty and charm, set off as it is by the light green of the fresh young foliage of the larch forest? Who can describe the luxuriant growth and the vivid colours of all these lovely children of spring? Finally, the fields assume a brownish hue, as the dark bents hang over the flowers foretelling the approach of the hay harvest. Meanwhile the grey rocks of the higher regions have decked themselves with bluish clematis, deep red and violet primulas, delicately marked saxifrages, white and red lilies, and hundreds of tender little flowers which nestle among the clefts of the rocks. The pastures, which for the most part lie above the region of forest, are like a gay flower-garden where the frolicsome cattle feed on the rich grass and aromatic herbs. Among the last mentioned are the so-called Iva and mother-wort, which, with the Alpine clover, are the sweetest and most abundant. The most famous of the Alpine flowers, Alpenrosen and Edelweiss, cover wide slopes and adorn the steep precipices. The sky-blue dwarf forget-me-not, the pink glacier Androsace, the stalkless glacier pink, whitlow-grass an inch in height, the tiled gentian, the small flowered  rapunzel, and other dwarf varieties of the Alpine flora, delight the traveller as he climbs above the snow-line to the bare mountain summit.

Caviezel marketed his particular passion to botanical enthusiasts, offering presses for drying plants, bouquets, floral illustrations, live plants, and other supplies for hobbyists and professionals alike. As an advertisement from 1877 reveals, he also prepared albums for sale, including comprehensive herbaria of the Bernina district, “containing 200 to 500 different plants,” and smaller albums “with 25, 50, 100 to 200 different species, in plain binding or elegant cases.”

The present example is one of the former, and surely one of his most substantial productions, prepared evidently for a customer of a scientific bent.  There is no title page nor any attempt to identify plants by anything other than their scientific names.  Instead, species are arranged according to the system employed in Jules-César Ducommun's comprehensive Swiss flora, his Taschenbuch für den Schweizerischen Botaniker (1869; rev. 1881), with extensive samples from the orders Ranunculaceae, Cruciferae, Caryophyllaceae, Legumiuosae, Compositae, Primulaceae, Gentianeae, Scrophulariacae, Cyperaceae, and Graminaceae. Taschenbuch identified many species as being unique to the Engadine, and rated flora by a scale of scarcity: s [selten]=rare, ss=quite rare, sss=very rare.  With his neat holograph annotations, Caviezel duplicates Ducommun’s rankings.

The volume is sumptuously bound in green cloth stamped in gilt, with raised gold elements. The spine is worn, with loss to the extremities, but the contents are in a good state of preservation overall, with the vast majority of the samples undeteriorated after 130 years.

We have located two similar herbaria prepared by Caviezel, one at the HRHRC (slightly smaller, at 150 leaves) and the other at the Royal Botanic Garden, Edinburgh, which may be the example (119 leaves) sold by Sotheby’s in 2006 for £4320.  A small album prepared by Caviezel (29 leaves) is in the collections of the New York Botanical Garden. The Royal Botanic Gardens, Kew, has an herbarium attributed to Johann Caviezel, but COPAC offers few details.