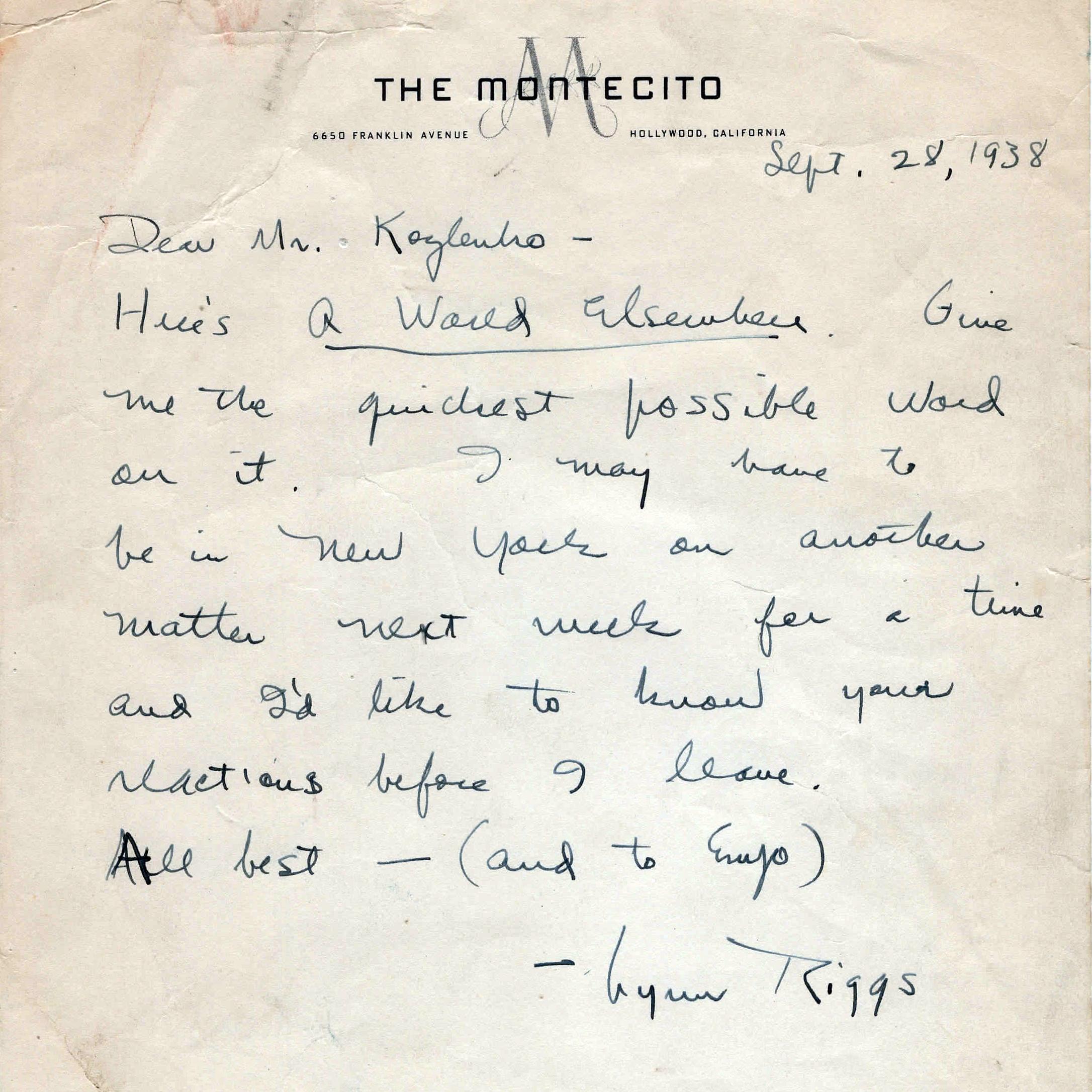 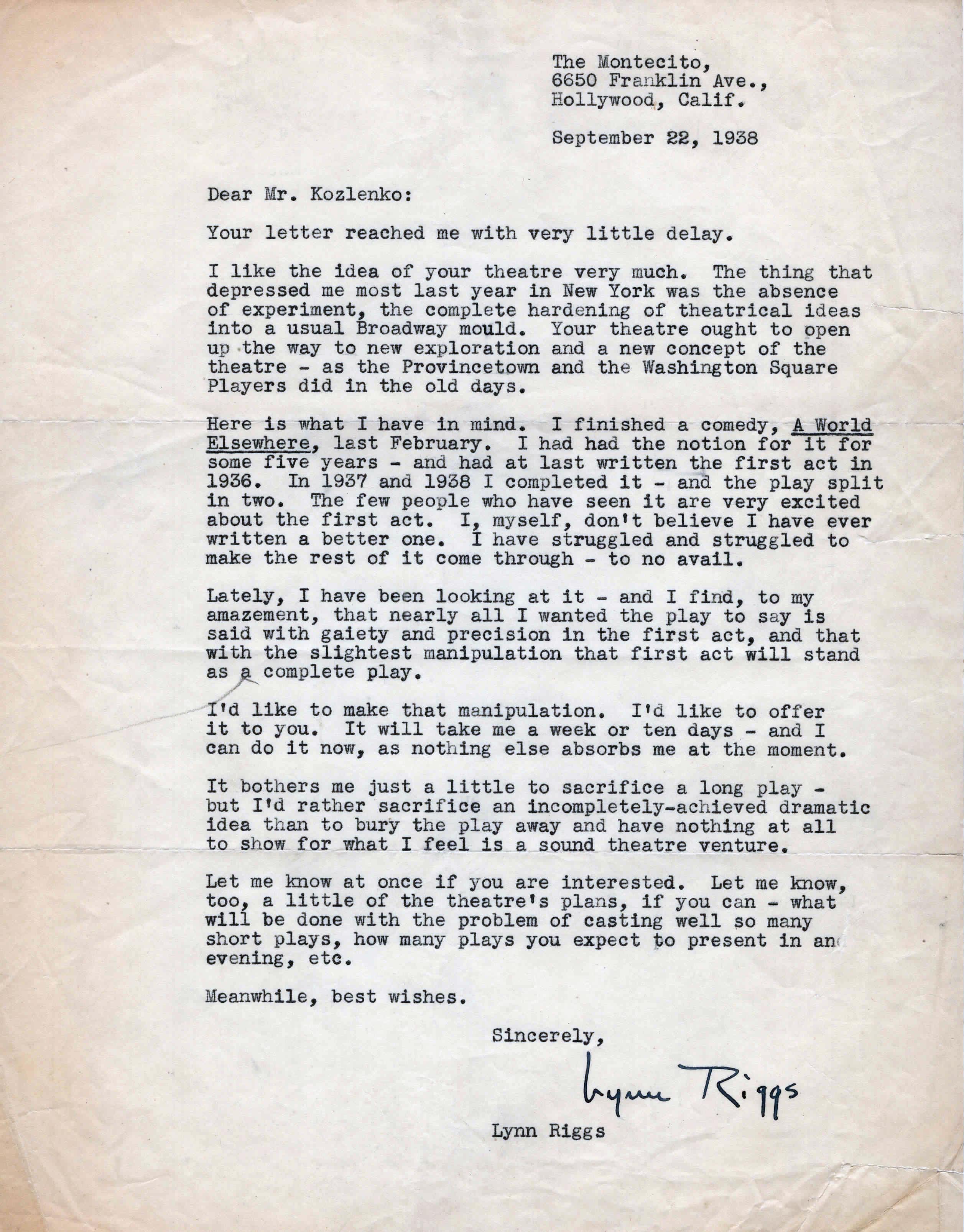 A small file of correspondence from the Cherokee playright Lynn Riggs to William Kozlenko (1907-1984) on the subject of Riggs's play, A World Elsewhere.

A playwright, screenwriter, editor, and impresario, Kozlenko was the founder of a repertory theater devoted to short dramatic works, and the founding editor of One-Act Play Magazine, published between 1937 and 1942. He was also devoted to social theater, and published dramatic works by such luminaries as Clifford Odets, Marc Blitzstein, and W. H. Auden. In his memoirs, the playwright Horton Foote noted that his only appearance as an actor on Broadway was at Kozlenko's theater. "He had a great love for the one-act plays and high hopes for their being a force in the commercial theater and a vital part of dramatic literature," Foote recalled. "He preached the gospel of the one-act play with great fervor and conviction."

Soon after founding One-Act Play Magazine,  Kozlenko reached out to Riggs, then at the height of his powers. The playwright was best known for Green Grow The Lilacs, which in 1943 would be adapted as the musical Oklahoma! In the first letter included here, sent from Santa Fe, New Mexico, on 17 March 1937, Riggs offers his regrets that he has no unpublished one-act plays. In September 1938, Riggs wrote again, this time from Hollywood, evidently in response to a further query from Kozlenko:

I like the idea of your theatre very much. The thing that depressed me most last year in New York was the absence of experiment, the complete hardening of theatrical ideas into a usual Broadway mould. Your theatre ought to open up the way to new exploration and a new concept of the theatre--as the Provincetown and the Washington Square Players did in the old days. ... I finished a comedy, A World Elsewhere, last February. . . . The few people who have seen it are very excited about the first act. I, myself, don't believe I have ever written a better one. . . . I find, to my amazement, that nearly all I wanted the play to say is said with gaity and precision in the first act, and that with the slightest manipulation that first act will stand as a complete play.

As several scholars have noted, A World Elsewhere is one of Riggs's most personal plays, containing coded references both to his lover, Enrique Gasque-Molina (the model for the play's charismatic General Gonzalo Fernandez Aguirre), and to his anticolonialist vision of native sovereignty.

In the later letters, the last of which was sent from New York City, Riggs sends a copy of the play and discusses the possibility of its book publication. We assume that Kozlenko printed the shorter version of Riggs's A World Elsewhere in One-Act Play Magazine, but limited library access during the pandemic has prevented us from confirming this. The play would be reprinted in an edited anthology, The Best One-Act Plays of 1939. The two-act version would first see light in Riggs's collection, Four Plays (1947). 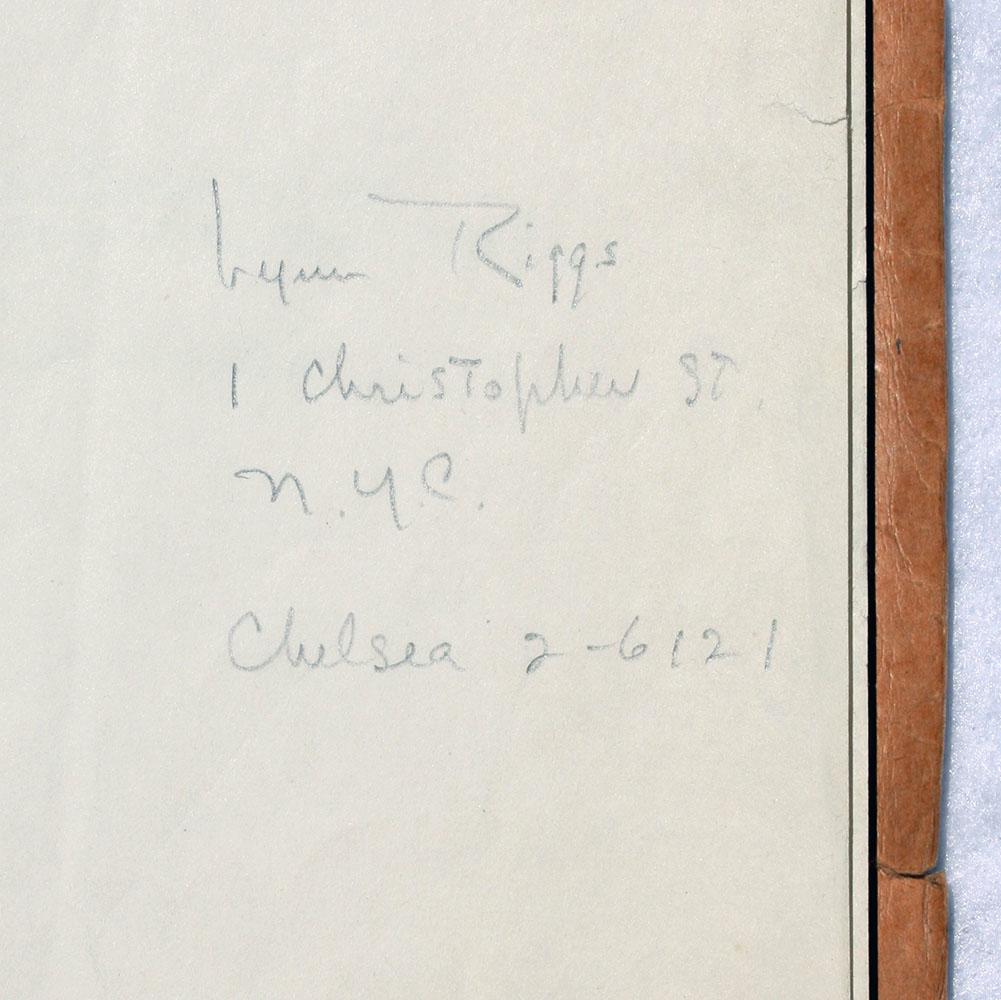