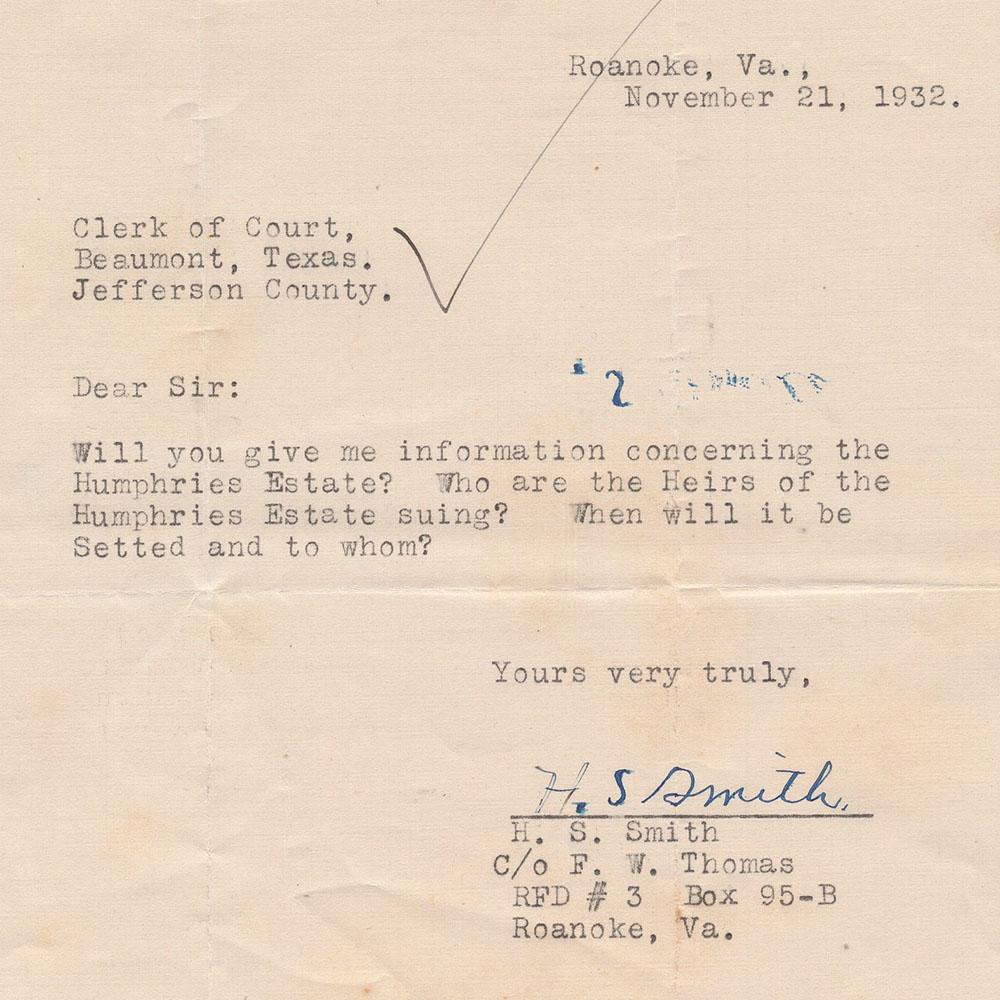 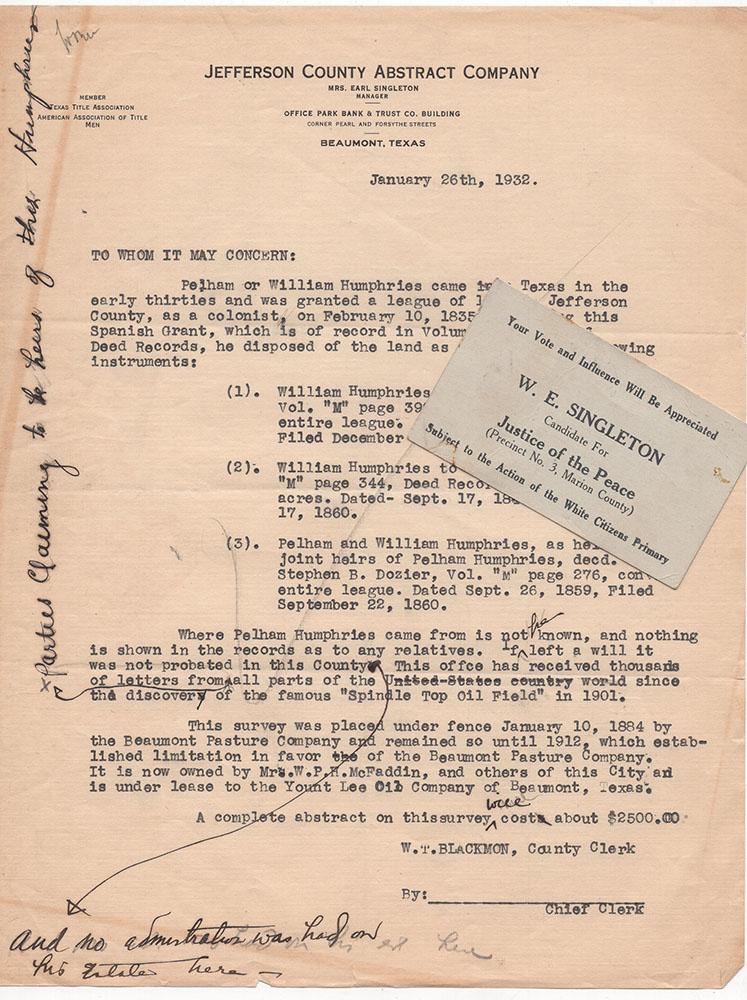 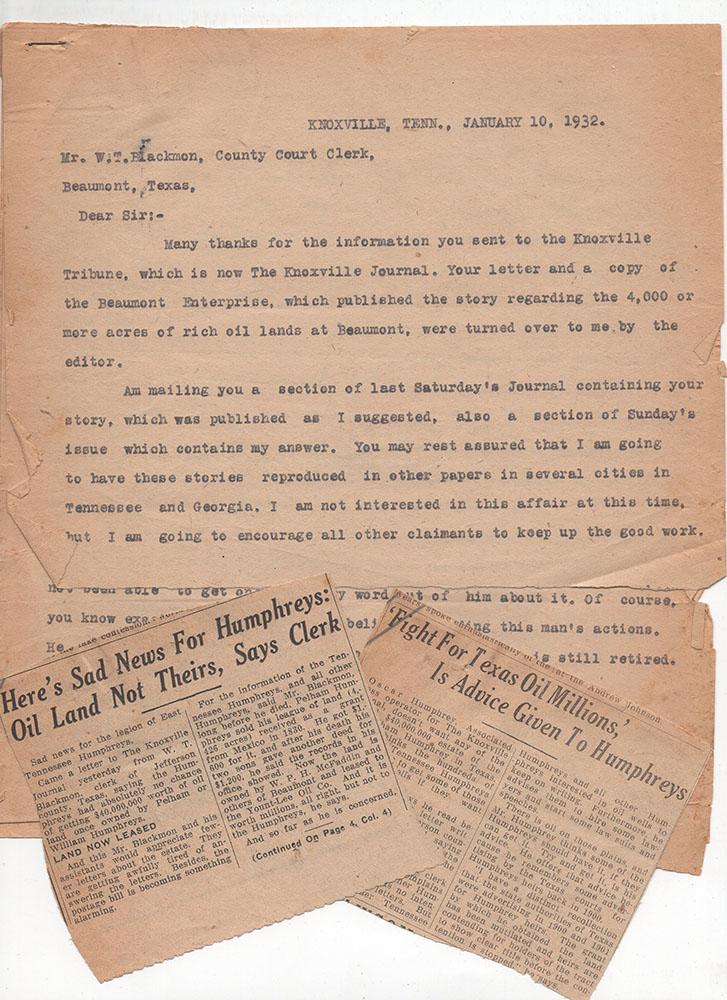 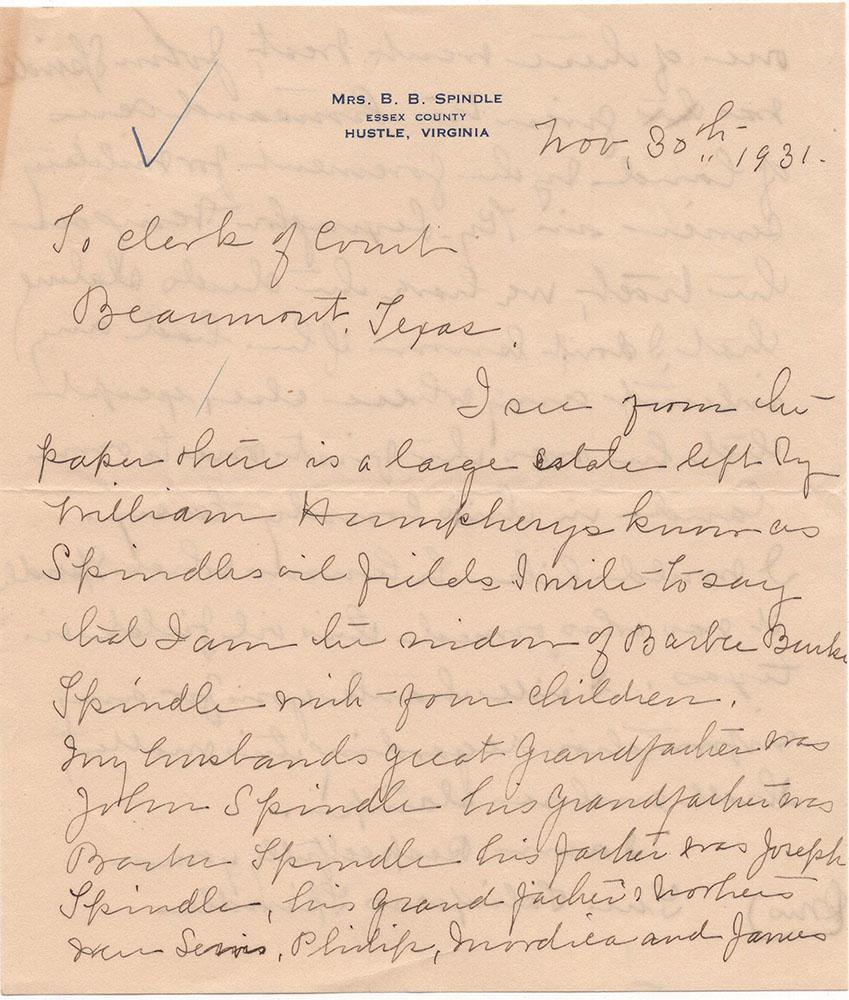 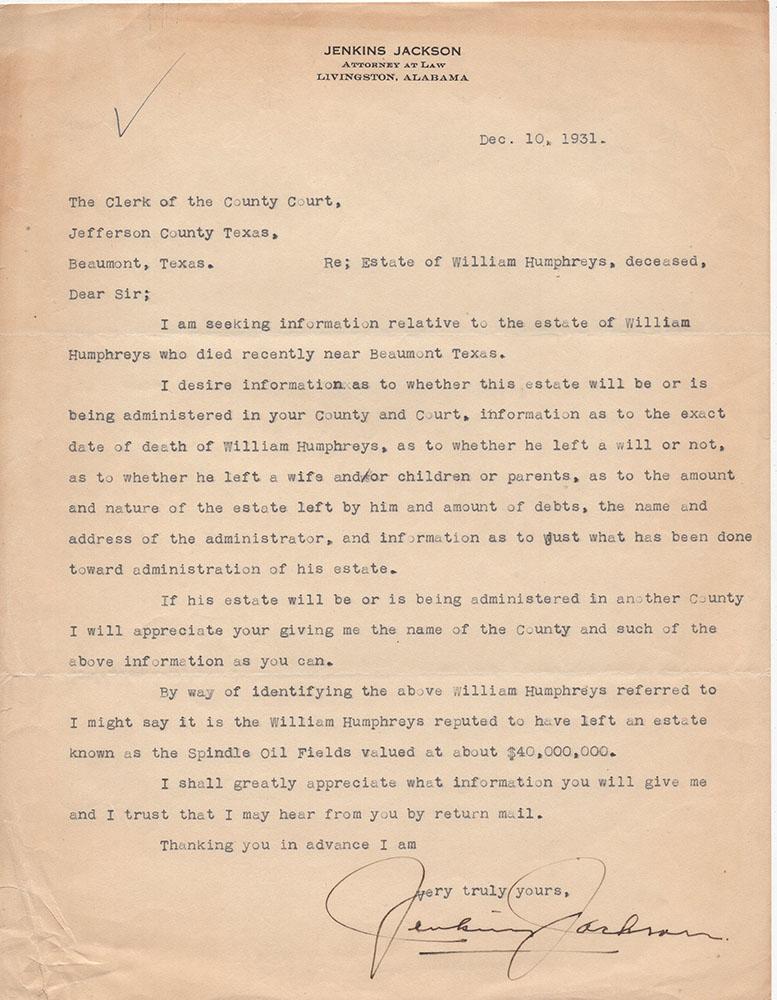 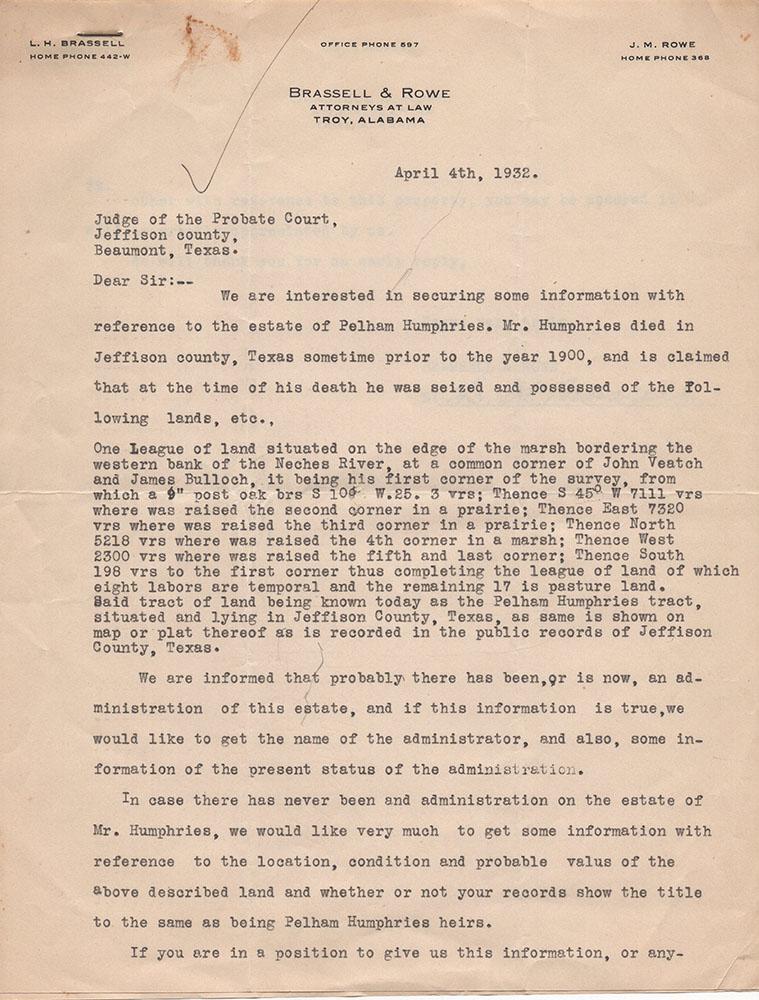 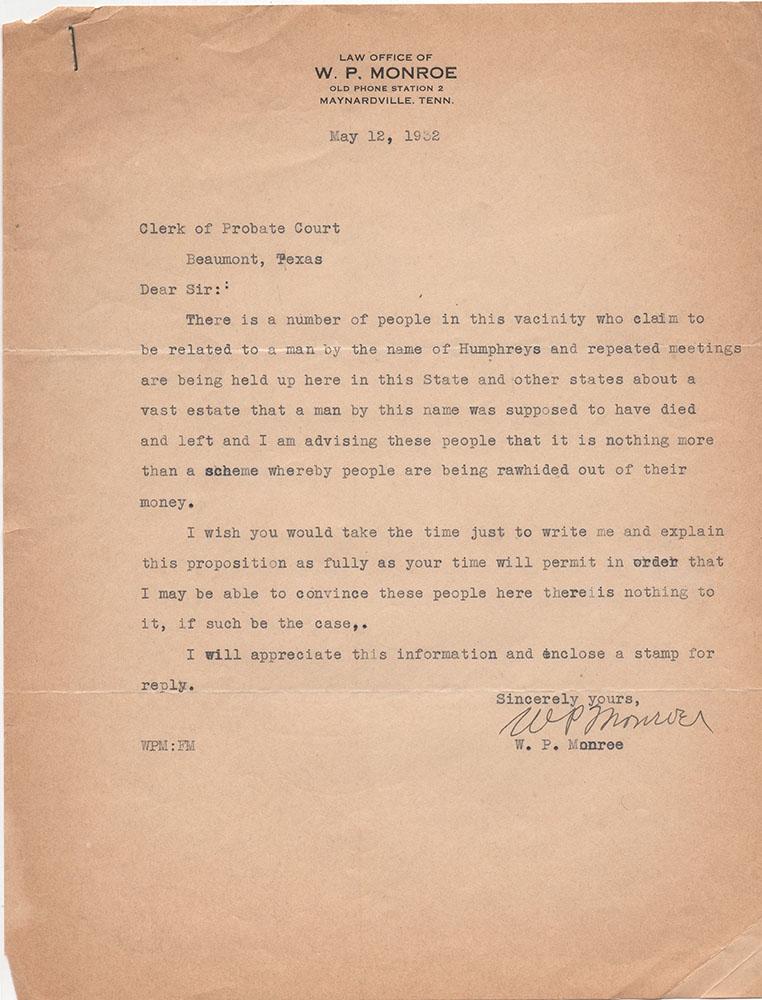 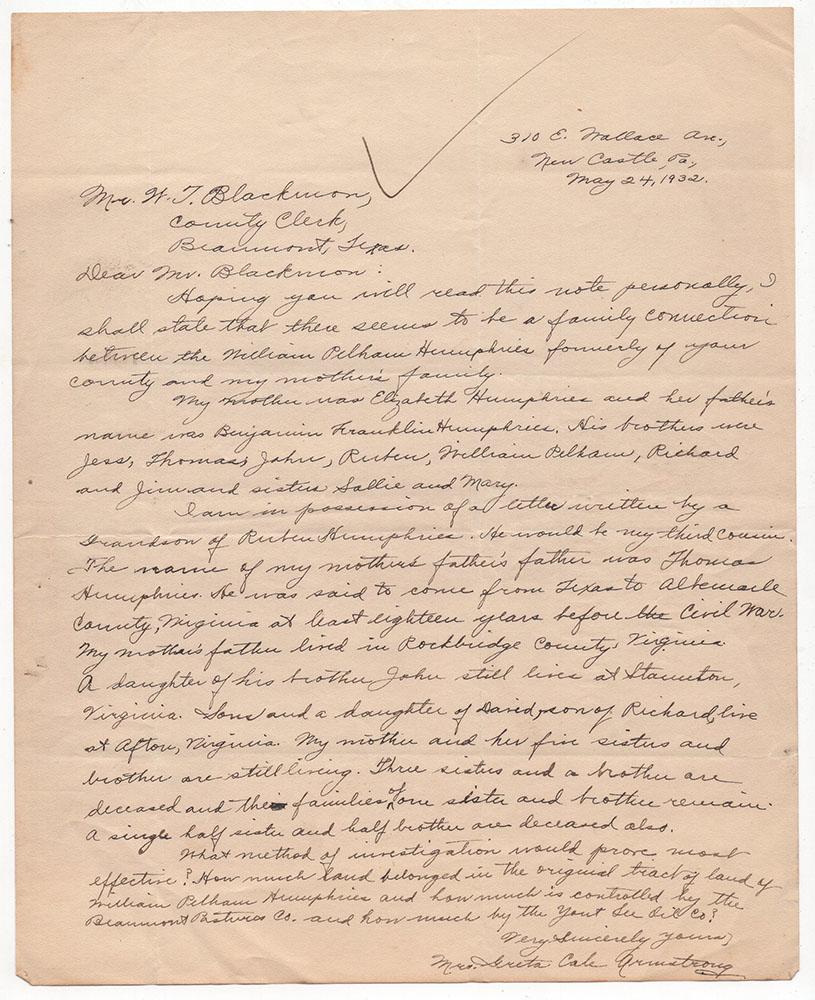 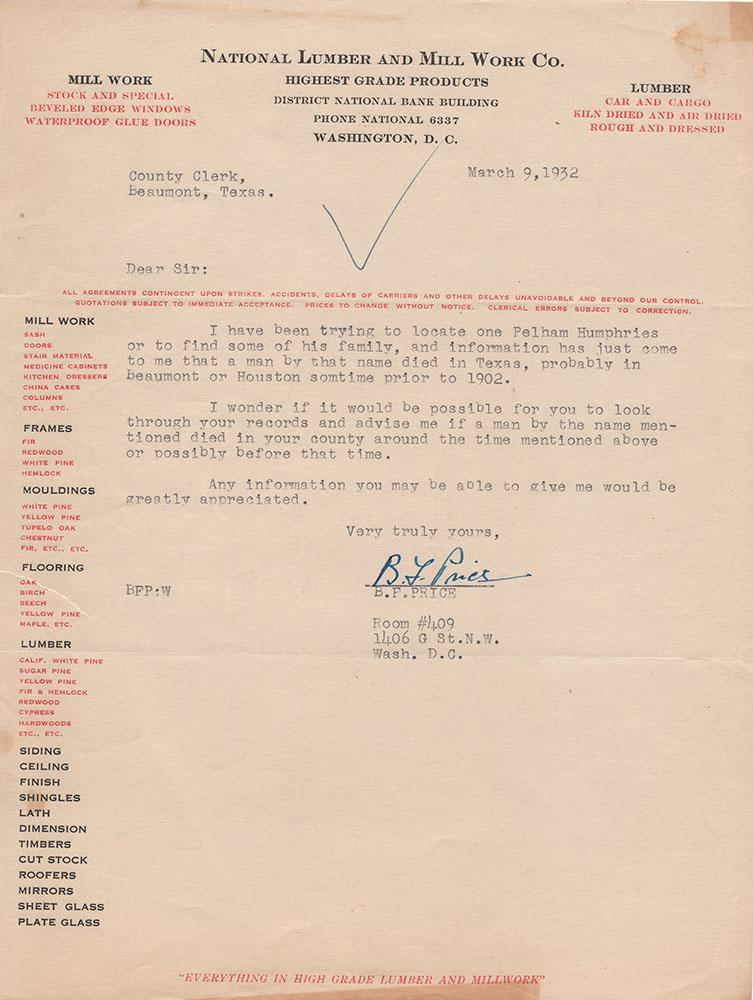 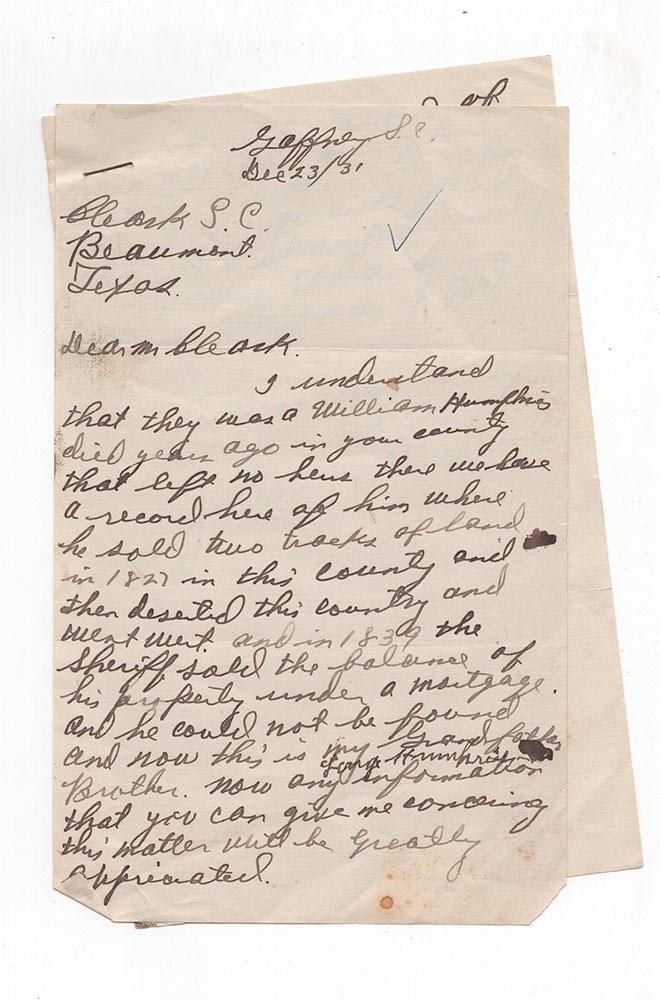 [Spindletop] A collection of about 100 pieces of correspondence between claimants to the Pelham Humphries fortune, from the files of W[alter] T[homas] Blackmon (1892-1973), Jefferson County Clerk, Beaumont, Texas. 1931-1932. Condition of letters ranges from crisp to ragged. Housed in an archival box, 0.25 linear feet.

A fascinating collection of correspondence relating to the vast fortune accumulated through the discovery of oil in Texas in 1901. In 1834 Pelham Humphries (1810?-1835?), a colonist in the disputed lands along the US border with Mexico, filed a claim for a league – some 4,428 acres – of land to the west of the Neches River, a few miles south of what is now Beaumont in Jefferson County, Texas. A patchwork of swamp and grassland good only for grazing, the land, which came to be called “Spindletop,” was deemed valueless. But in 1901 a geological expedition sank a well on Spindletop and struck a gusher. Beaumont became the epicenter of the Texas oil boom. The fields there produced more oil in a day than the fields in the rest of the world combined; over 17 million barrels in 1902. Everyone who owned land in Jefferson County made money, but none so much as William Perry Herring McFadden (1856-1935), a rancher who had bought Spindletop in 1883 and became one of the richest men in the world.

The problem was that when McFadden bought the land, its ownership was in dispute. Humphries had died in obscurity, possibly killed in a gunfight or perhaps hanged for stealing horses – no aspect of his life is uncontested -- and there was no clear transfer of title. The first suit over the Humphries Land Grant was filed in 1880. McFadden hedged his bets by purchasing the rights of both parties in the suit, but later claimants have argued that neither had a legitimate interest. When geologists stuck oil hundreds of people discovered genealogy. The story swiftly spread that the heirs to the Humphries estate were due a share in the profits from the great companies that extracted oil from Spindletop. With accumulated interest, the estate was worth millions, perhaps billions. “Suddenly, everyone remembered ‘Uncle Pelham’ Humphries,” remarks one historian (Petty, 24). A series of lawsuits ensued, beginning shortly after the discovery and continuing through the 2010s, some extending over decades.

The suits typically aggregated the interests of a great many claimants. The first major case over title to the Humphries land grant, Thomas Anderson et al. vs. A. F. Lucas et al., involved over 1000 individuals and corporations. Glover v. McFaddin, which was tried in various courts from the 1940s until it was tossed out in 1953 by the Court of Appeals for the Fifth Circuit, pitted some 2500 plaintiffs, all claiming kinship with Humphries, against 20 individual and corporate defendants. Three simultaneous suits known as “the Humphries trilogy” concluded with a single order of dismissal in 1968. About 3,000 members of the Humphries Heirs Trust Association were the plaintiffs in Peregoy v. Amoco Production, which ended in disappointment. “This court desperately desires that the ghost of Pelham Humphries will no longer haunt the halls of the United States court system,″ U.S. District Judge Howell Cobb wrote in his 1990 decision dismissing the case. Judge Cobb’s desperate desires notwithstanding, litigation has continued to resurface. As Judge Homer Thornberry of the Fifth Circuit Court of Appeals observed in 1968, “unlike old soldiers, expectant heirs never fade away.”

After Anderson v Lucas was settled in 1906, the Humphries story appears to have been forgotten for several decades. But during the depths of the Great Depression, people turned again to their family trees, and hopes were rekindled. Humphries reportedly hailed originally from Tennessee, and in October 1931 the Knoxville Journal reported that members of the Humphreys family were gathering in Madisonville, Tennessee to discuss their options. In November, another meeting was held in Knoxville, drawing over 200 attendees. Responding to the growing number of inquiries sent to his office, W. T. Blackmon, the Jefferson County Clerk wrote to the Knoxville Journal to set the record straight – “the Humphreys have absolutely no chance of getting $40,000,000 worth of oil land,” the Journal summarized. “And so far as he is concerned, he had rather hear no more about it. … He informed the Journal that he had quit opening letters from the Tennessee Humphreys.” But Blackmon’s letter had no effect. The next day the paper ran a piece in which Oscar Humphrey, a stringer for the Associated Press, voiced his suspicion at the clerk’s response and urged people to fight for their millions.

Offered here is Blackmon’s file of inquiries from various Humphries claimants and their representatives, all dated 1931-1932. A defiant letter here from Oscar Humphrey encloses clippings from the Knoxville Journal and affirms “You may rest assured that I am going to have these stories reproduced in other papers in several cities in Tennessee and Georgia.” Letters here from Tennessee, Alabama, Louisiana, and Texas suggests that Humphrey’s threat was not an idle one. Some of the letters are a few typed lines, others are handwritten and run on for pages. Also here are carbon copies of Blackmon’s response, which he adapted as a mimeographed form letter. To dissuade inquirers from further correspondence, his form letter notes that a full abstract of the survey of claims to Spindletop would cost “about $2500.00.” (Material here suggests that this was a little side scam Blackmon had with Earl Singleton, the proprietor of the Jefferson County Abstract Company.) Eventually, Blackmon gave up his duties as County Clerk, and accepted a new position as assessor and tax collector for Jefferson County. Doubtless he found chasing tax delinquents to be a restful occupation in comparison.

A note on provenance: These documents were acquired from the estate of a prominent dealer in Americana. Recognizing that much material have been removed inappropriately from Texas archives over the years, we have contacted Jelain Chubb and Alana Inman of the Texas State Library and Archives Commission and Theresa Goodness of the Jefferson County Clerk's Office. They all confirm that there is no indication that these were removed illegitimately. Consensus is that this material originated in Blackmon’s personal files.