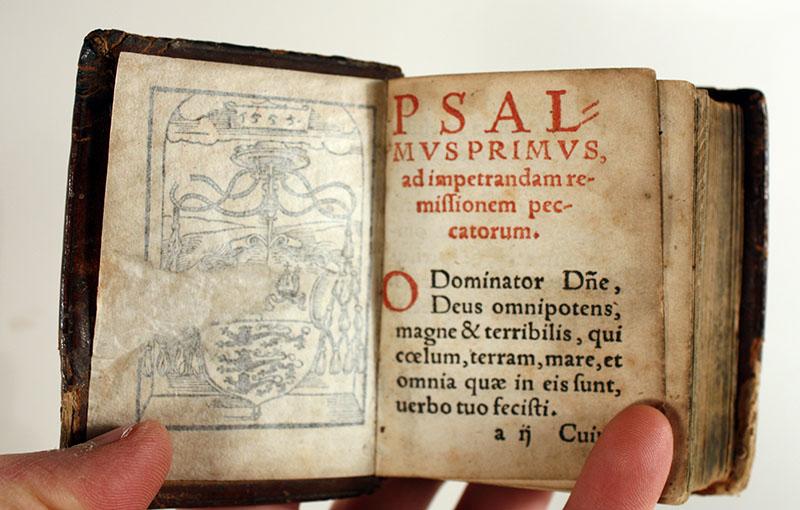 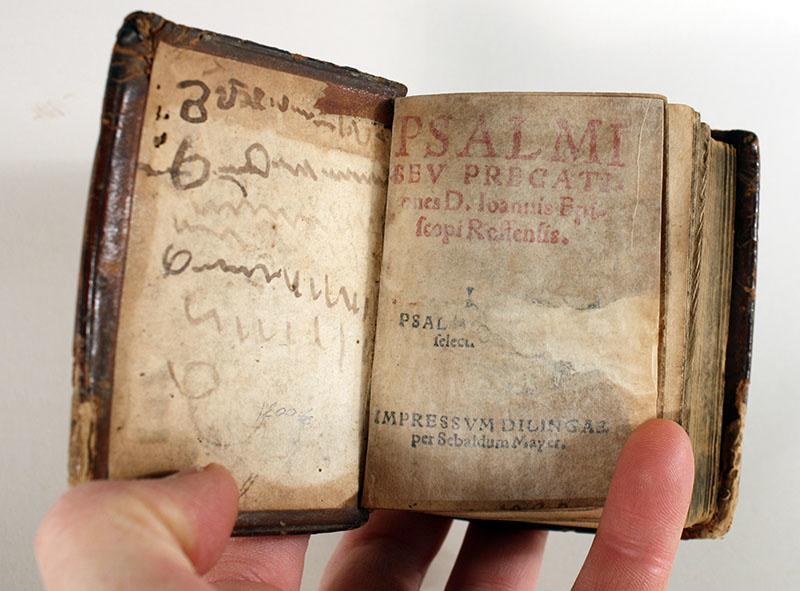 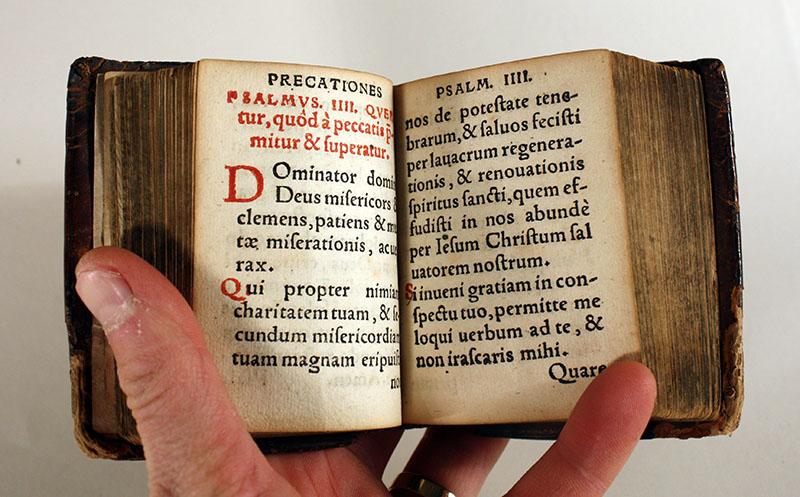 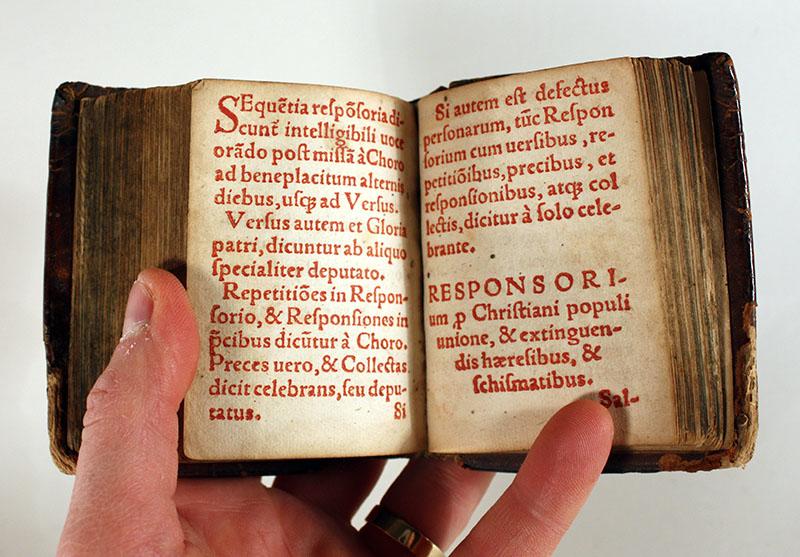 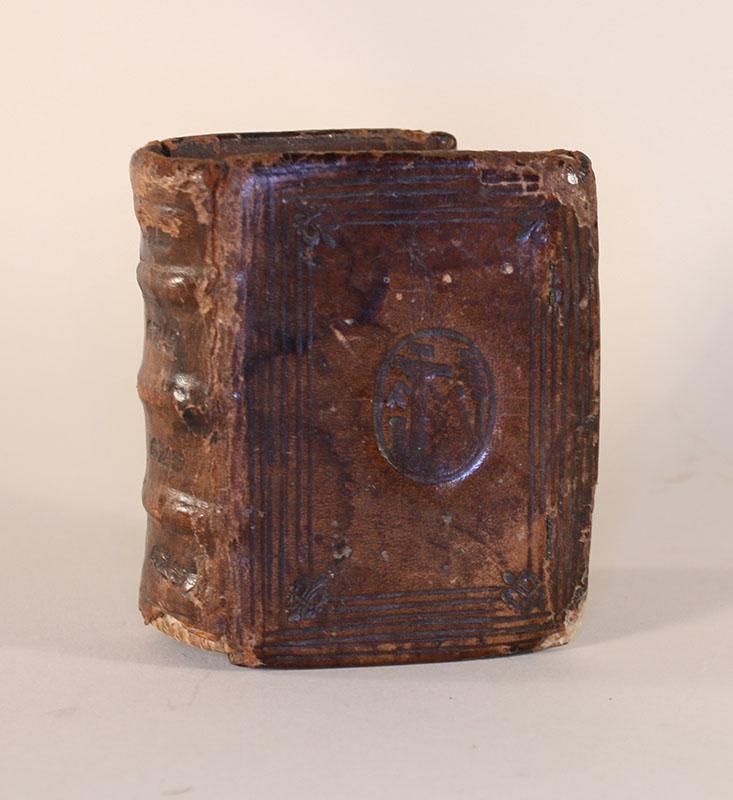 A fascinating pocket-sized edition of a popular devotional work by John Fisher, augmented by prayers written by the Dominican theologian Pedro de Soto with reference to the Council of Trent.

Ordained in 1491, Fisher served as Bishop of Rochester and chancellor of the University of Cambridge. A friend of Erasmus and a foe of Luther, he aroused the ire of Henry VIII, his former pupil, by opposing his request to divorce Catherine of Aragon, and his encroachments upon the prerogatives of the Church.  Refusing to acknowledge the King’s supremacy over the Church in England, Fisher was found guilty of treason and beheaded in 1535 on the feast day of Saint Alban, the first martyr of Britain. He was beatified in 1886, and canonized in 1935, along with Thomas More.

Prepared while he still enjoyed the king’s favor, Psalmi Seu Precationes collects fifteen meditations, literary collages composed in Latin out of verses culled from the Gallician version of the Vulgate Psalms, the Hebrew Bible, the New Testament, and the Apocrypha, followed by three psalms of David (Ps. 22, 100, and 12).  The book was known colloquially in England as The King’s Psalms. As Janel Mueller has noted in her work on Katherine Parr (1512-1548), who translated the work into English, Fisher’s prayers are “clearly recognizable as a Christian humanist exercise in sacred rhetoric.” The work was first published in Cologne around 1525 – evidence, notes Maria Dowling, that Fisher “was extending his pastoral care to the whole of Christendom, not confining it to his English flock.”

Fisher’s Psalmi originally concluded with a benediction addressed to Henry VIII. That, understandably, has been dropped from this edition. In its stead, the publisher has appended a collection of ten prayers by Pedro de Soto, O.P., the Dominican theologian who once served as confessor to Holy Roman Emperor Charles V. When the University of Dillingen was founded in 1549 as the College of St. Jerome, de Soto served as its first chair of theology. (Soto dreamed of making Dillingen a hub of Dominican intellectual life, but in 1563 the Bishop of Augsburg turned the administration of the university over to the Jesuits.) In 1555 – the year this volume was published – de Soto was sent to London to take part in the persecutions that led to the executions of the Oxford Martyrs, among whom was numbered Thomas Cranmer, the Archbishop of Canterbury. In 1559, he was tapped by Pius IV to serve as a theologian at the third convocation of the Council of Trent, but he died before the council was concluded.

The material by de Soto appended to Fisher’s text appears anonymously, and has in fact not been recorded until now. De Soto’s work opens with introductory remarks (Sequentia responsoria…, T6v–T7r), followed by ten prayers (or responsoria) for the success of the Council, for the extirpation of heresy, and for Christian unity (Responsorium pro Christiani populi unione, et extinguendis haeresibus, et schismatibus I to X, T7v–Z7r). The volume concludes with a brief addendum to the Litany of all the Saints (In letania pro Concilio, Z7r–Z8v). As Mario Farrugia has demonstrated, de Soto’s texts are highly significant in the context of the history of the Church. He composed the prayers during the second Session of the Council, and “share[d] Charles V’s hope that the Reformers would one day attend the Council, actively participate in its sessions, and finally submit to its authority.” His prayers pull no punches in their indictment of the Reformation. His fourth prayer, noting that the church is “in a time of war” (tempore belli), tears into the enemies of the Church: “Ecce inimici tui sonuerunt, et qui oderunt te extulerunt caput ; super populum tuum malignaverunt consilium et cogitaverunt adverus sanctos fideles tuos.” Set to music by Jacobus de Kerle in what Otto Ursprung describes rather intriguingly as a “polyphon-homophon gemischten un gemäßigt modernen ausdruckhaltigen Stil,” de Soto’s poems were sung at the Council three times a week.

De Soto’s additions to the present volume represents the second publication chronologically of his responsoria. Buried thus, they have not been recognized by bibliographers. De Soto first published his prayers anonymously with Sebald Meyer in Dillingen as a booklet in 1551. Meyer reprinted the booklet, this time under de Soto’s name, in 1558. In 1562, a new edition was published in Venice, as a musical score by Kerle. Farrugia, who did not see this 1555 volume, has identified a number of variations between the 1551, 1558, and 1562 version of de Soto’s texts. It will be worth comparing this newly identified 1555 edition to the others.

Especially intriguing is the juxtaposition of de Soto’s prayers with Fisher’s meditations. British publishers commonly paired Fisher’s work with Thomas More’s; this combination of Fisher and de Soto seems to be unique to this Dillingen edition. Was the decision made by de Soto, or the publisher, Sebald Meyer? Did de Soto’s move to London in 1555 expose him to Psalmi Seu Precationes, or had he encountered Fisher’s work earlier? De Soto’s prayers were meant for chapel recitation; was he aware that Fisher’s advocated spiritual prayer over vocal prayer? (“It is far more profitable,” Fisher had written, “to pray with heart only, than with his heart and tongue together.”)  If so, was de Soto consciously trying to influence British devotional practice? Given the revisions de Soto made to his own work over several publications, does the Dillingen edition offer a faithful reproduction of Fisher’s work?

An intriguing volume, and a very rare one: there is only one copy recorded worldwide, at the Bayerische Staatsbibliothek, Munich (VD16 F 1234).