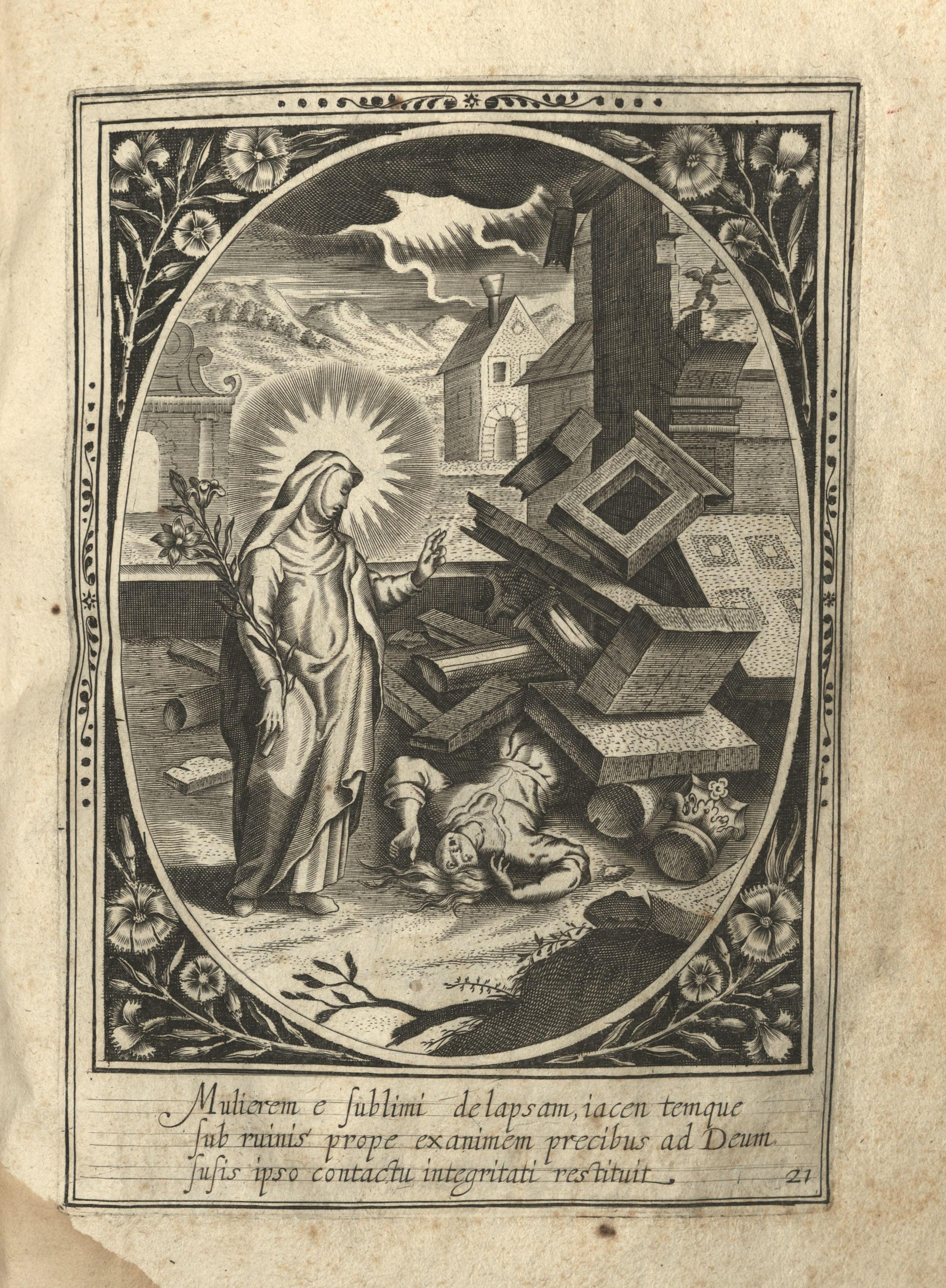 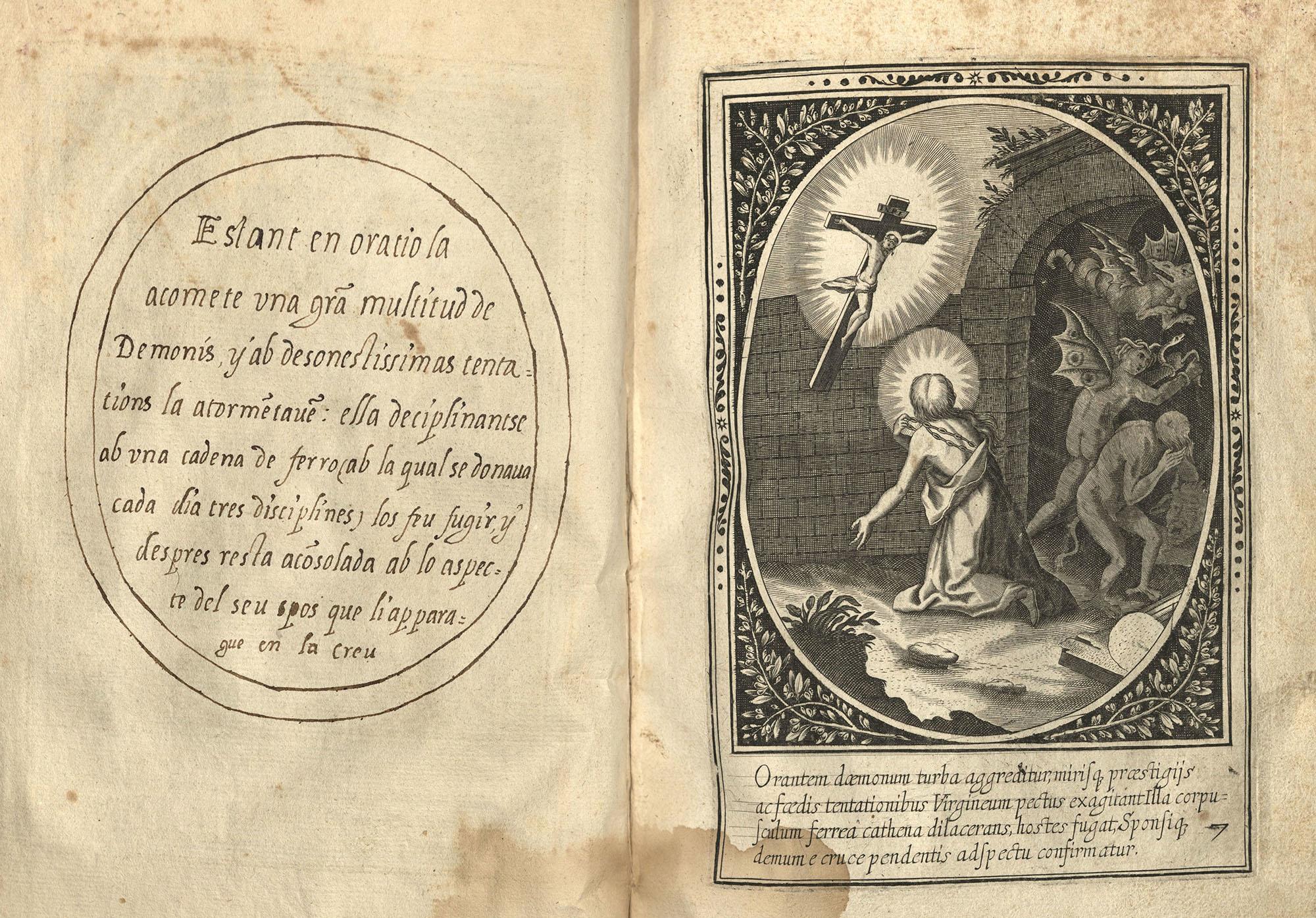 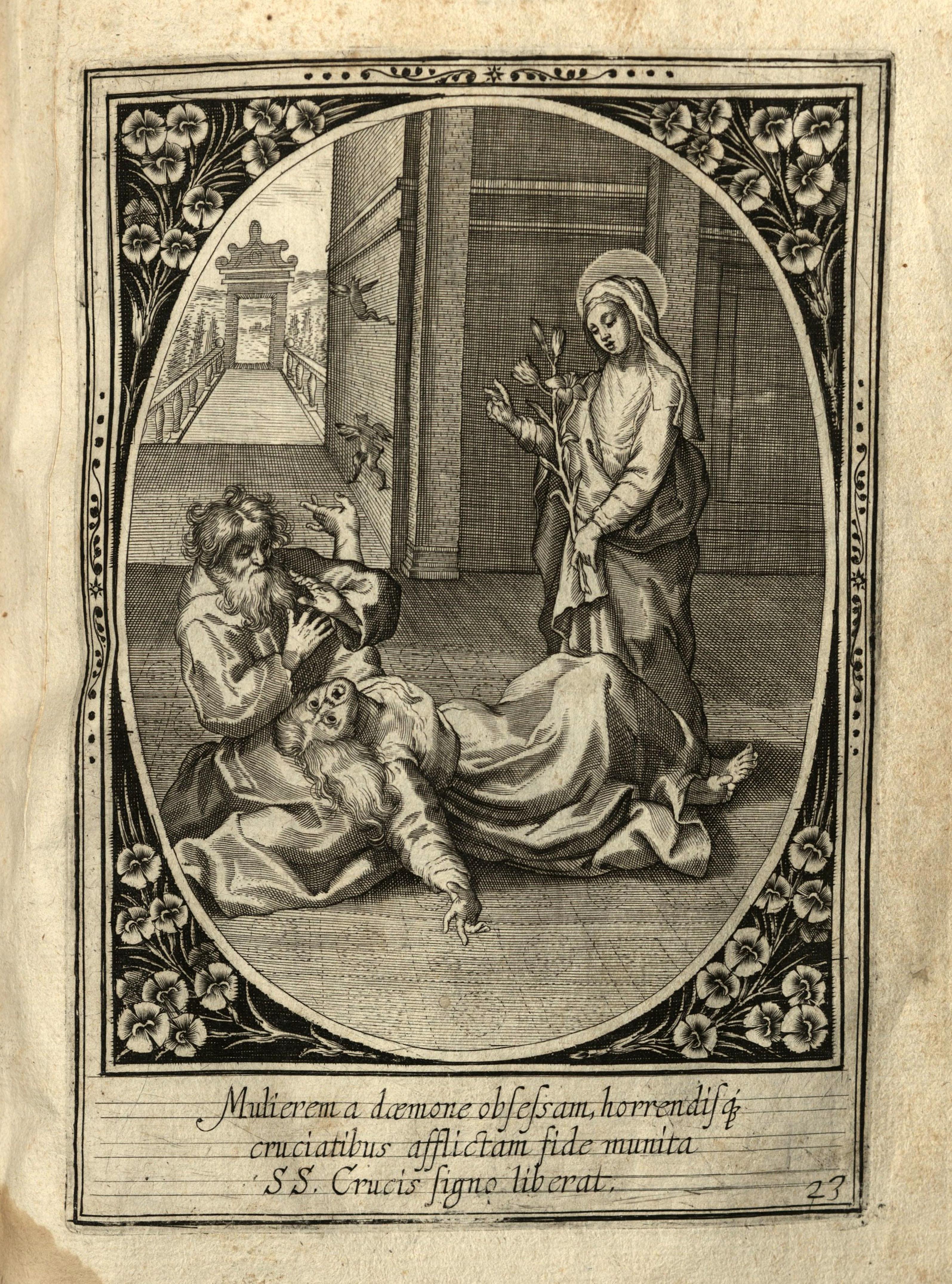 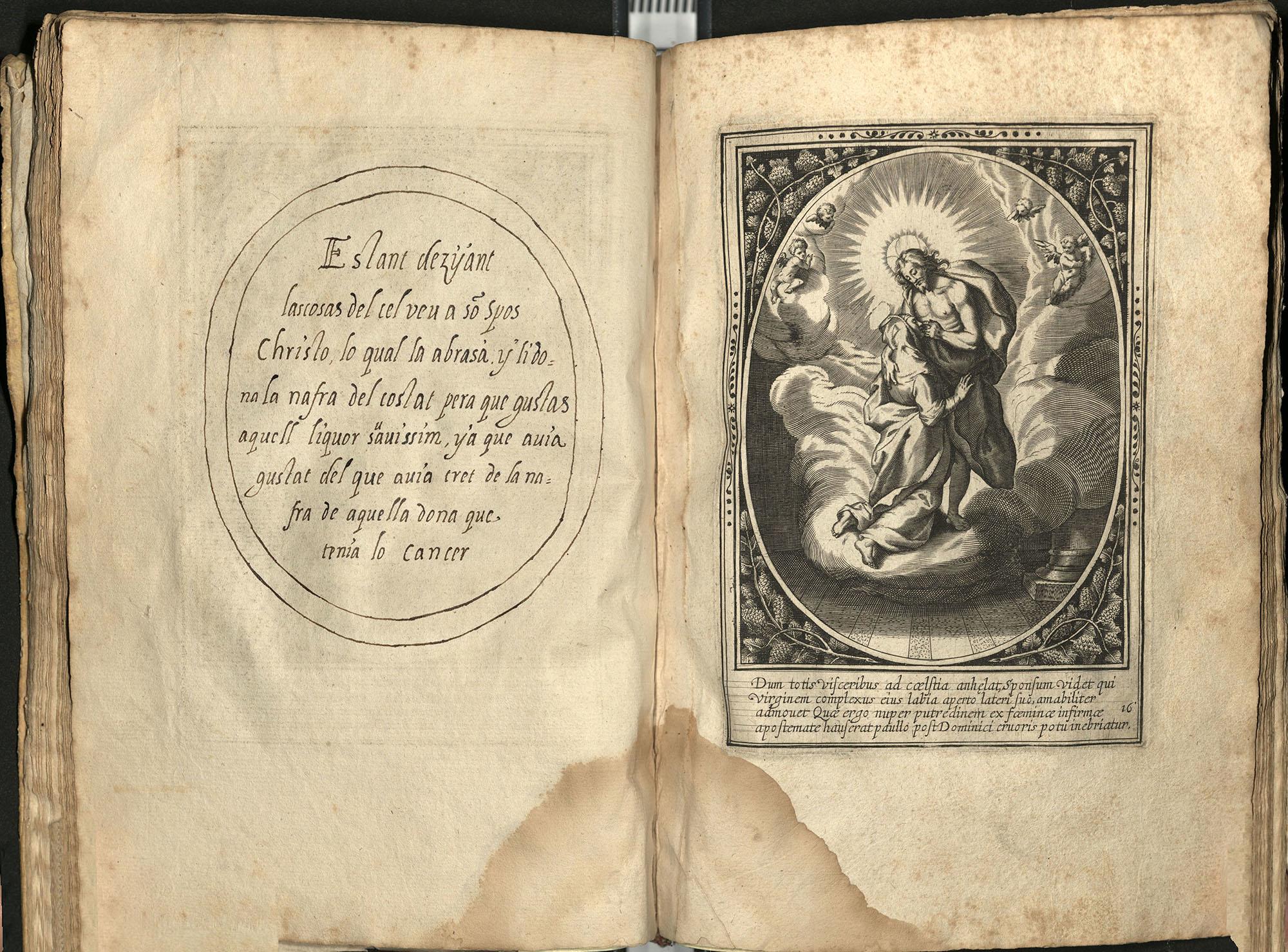 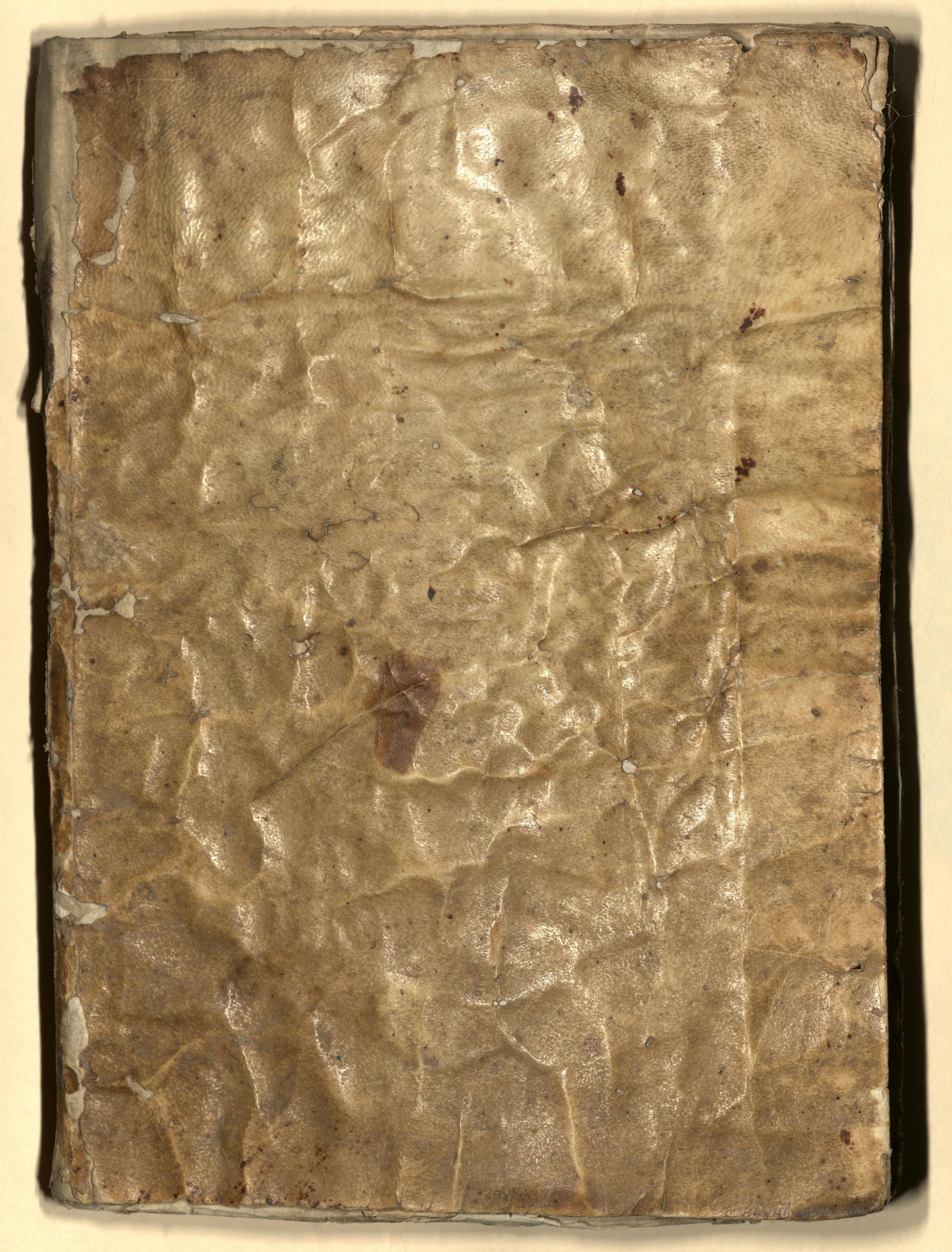 SWELINCK, Jan (fl. 1609-1660) and Thomas DE LEU (1560-1612).  D. Catharinae Senensis Virginis SS. Ord. Praedicatorum vita ac miracula selectiora formis aeneis expressa [Paris: Apud Thomas de Leu, ca. 1610], 24 cm; 62 leaves, including 29 plates (out of an original 33) interleaved with 33 blanks, with holograph material on each blank. The title and plates 1, 9, 32, and 33 are lacking, possibly intentionally, given its use (facsimiles provided). A water stain radiating out from the gutter affects the lower portion of each pages along the inner margin; original vellum worn and stained, with loss to upper third of spine.

A unique copy of this rare pictorial life of St. Catherine of Siena, comprising 29 numbered plates portraying scenes from the life of the Saint, with Latin legends printed below each image. Facing each plate is an inserted leaf with a manuscript translation (or more often paraphrase) of the Latin texts into Catalan.  There are 33 inserted blanks, so four leaves present text without corresponding images. The book represents a fascinating artifact of popular piety and readership during the Catholic Reformation.

The turn of the seventeenth century saw several publications presenting the life of St. Catherine in pictures based on Raymond of Capua’s hagiography, Legenda maior. In 1597, Francesco Vanni published his drawings, engraved by Pieter de Jode, as Vita, mors, gesta quaedam selecta B. Catharinae Senensis. The Vanni edition inspired another publication in Antwerp in 1603 edited by Michel van Ophovens, D. Catharinae Senensis Virginis SS. Ord. Praedicatorum vita ac miracula selectiora formis aeneis expressa, with pictures engraved by Cornelis Galle from drawings by Jan van der Straet. This Antwerp edition appears to have been the basis for both the edition engraved by Edmond Charpy and published by Jean Le Clerc in Paris in 1607, and the present work, which must have been published between 1603 and 1612.  The 1603 Antwerp edition and the 1607 edition by Le Clerc are represented in several institutions, but this one by de Leu is much rarer. OCLC locates a copy at the Bibliothèque Municipale de Lyon and another (incomplete) at the Dominican House of Studies in Washington, DC; CCFr locates a third copy at Versailles. The book is not listed in Brunet, Renouard, Cioranescu, COPAC, OPAC SBN, or KVK.

Bianchi and Giunta, Mortimer, Wegner, and others who have studied the iconography of St. Catherine have observed wide variation in both the choice of incident and the style of representation. Thus, a woodcut in the Aldine edition of her Vita portrays Catherine holding the emblems of spiritual authority (lily, crucifix, crown, etc.), whereas a mural by Francesco Vanni emphasizes the saint’s quiet strength and civic leadership in alleviating the suffering of others.  The plates here draw on Dutch traditions (note for example the floral frames for each image) as well as Italian models of depicting the lives of saints in vernacular spaces.

The initial plates are signed “Jan Swelinck fecit, Thomas de Leu, excu.” Swelinck, best known for his engravings for Jan de Brune’s Emblemata (1624), and his map of Port Royal in New France (1609). Some details about his life may be gleaned from the notarial records of Nicholas Nourry in the French National Archives, which identifies Swelinck as a native of “Nanter” (=Neer Elten?), Guelders, residing in Paris from the 1610s through the 1630s at least. The career of De Leu, a prolific publisher, engraver, and print seller of Flemish extraction living in Paris, is well documented.

This copy was prepared for local readers in Catalonia, which had a burgeoning literary culture at the turn of the seventeenth century.  “There are many bookshops and an incredible wealth of books” in Barcelona, wrote Dionis de Jorba in 1589, “no less than in Paris, Toulouse and Salamanca, enough to cause wonderment to people from outside.”  The thriving trade included such specialists as Joan Guardiola, who imported thousands of books from Lyon and elsewhere. It is possible that this copy may have been prepared by a local bookseller, who imported the printed sheets from Paris as well as the blank pages (which appear to be the same paper), prepared the translation, arranged the ­­­­leaves, and had the book bound locally. But, as we shall discuss, we think the greater likelihood is that this expanded copy was prepared not by the bookseller but by the purchaser.  This copy lacks the title and four plates, but there are few signs of loss.  Plate 9 was clearly removed at some point – there are signs of excision – but there do not appear to be other marks of deliberate damage, save for some remnants between plate 2 and the translation for plate 2. This suggests the possibility that the sheets may have been bound incomplete, and that the excisions were made by the original owner. This would make sense if the volume were intended for use not as a private devotional but rather as a tool for religious instruction.  The translations here provide the clue.

Readers of Catalan were introduced to St. Catherine through two translations of Raymond of Capua’s Legenda maior published in Valencia in 1499 and 1511. As Casas Nadal has argued, Dominican leaders in Catalonia promoted the veneration of St. Catherine as a means of reinforcing ties with Rome after the Western Schism, and of introducing a new model of domestic piety into the lives of the middle classes.  As many writers have noted, St. Catherine played a special role in the formation of popular spirituality in Early Modern Spain, offering a model of female sanctity that emphasized not martyrdom but piety.  This model was especially important in the context of the Catholic Reformation, and would prove to be highly influential in the development of religious life in Spain in the centuries to come.

In this light, comparing the printed Latin with the Catalan text is instructive.  Throughout this volume, the Catalan paraphrases the Latin, simplifying the syntax and adding details indicative of inside knowledge. For example, plate 7 depicts St. Catherine scourging herself with an iron chain (ferrea cathena) to drive away the demons of temptation (see following page).  The Catalan paraphrase adds the telling detail that she did so three times a day (Ella … se donaua cada dia tres disciplines). This information about the frequency of flagellation is drawn from Raymond (cap. 6). Clearly, whoever prepared the translation was familiar with his text.  So we think it likely that this copy was prepared by the (Dominican?) purchaser, who assembled an interleaved volume for use in a didactic setting.  This might also account for the missing plates, which could conceivably have been put to use elsewhere.

Equally important in the context of the Reformation is the book’s emphasis on visual piety. As Robert Scribner pointed out, illustrations such as those featured here “served as a meeting point between the illiterate, the semi-literate and the literate.”  In 1622, the Church would establish an office of Propagandio to disseminate further works aimed at a popular readership.  Books such as this one underscore the fact that reading was a social activity, not a solitary one, and highlight the juncture between orality and textuality.  The images from St. Catherine’s life are potentially ambiguous and Latin was intelligible only to the privileged.  But the simple language of the translations meant that this book could be read by – or read aloud to – children, women, and others without benefit of education.  As literacy rose, the woodcut would be replaced by the pamphlet as a primary means of religious indoctrination.

A fascinating copy of this rare volume, with relevance for scholars of the Catholic Reformation in Spain, the representation of female saints, and the history of the book.