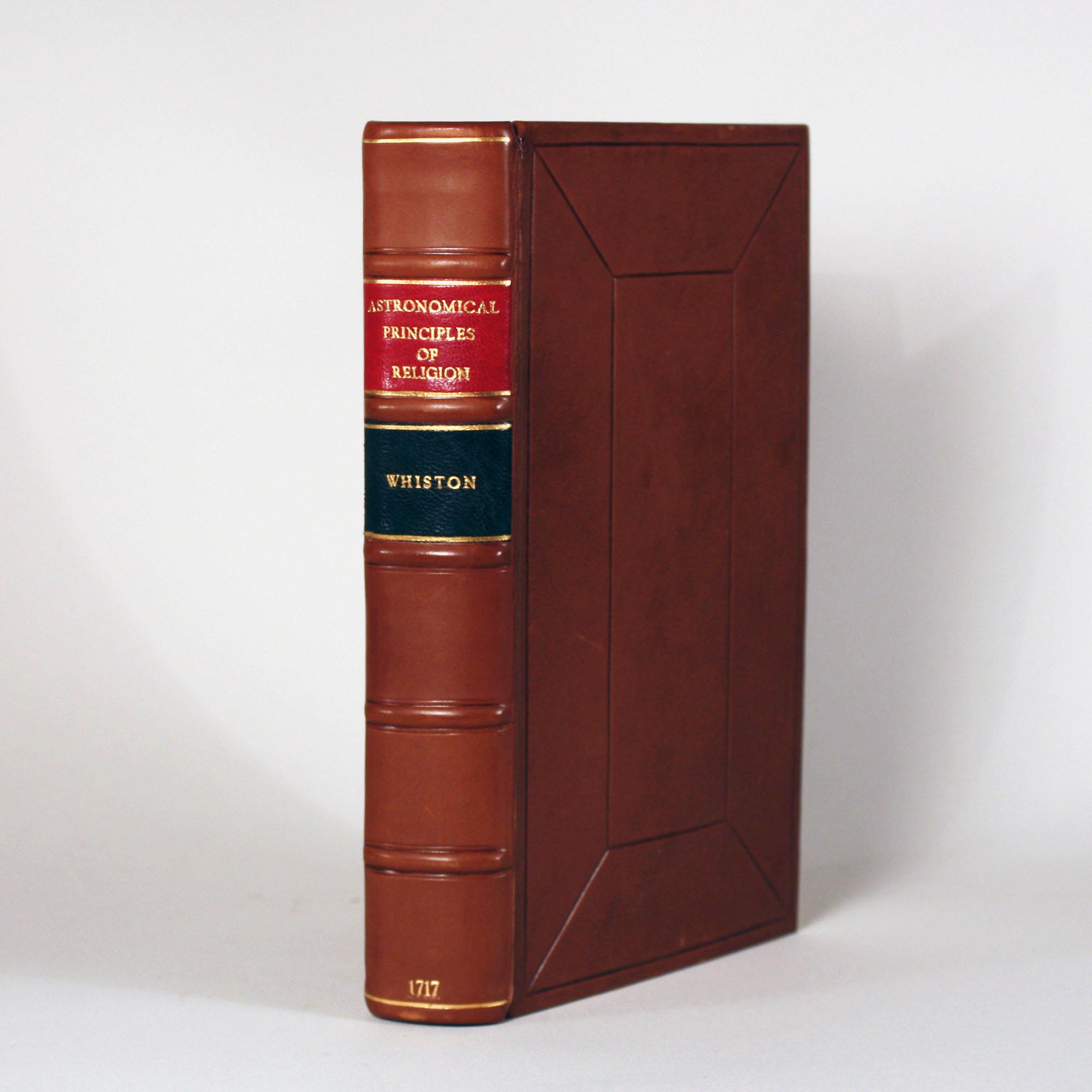 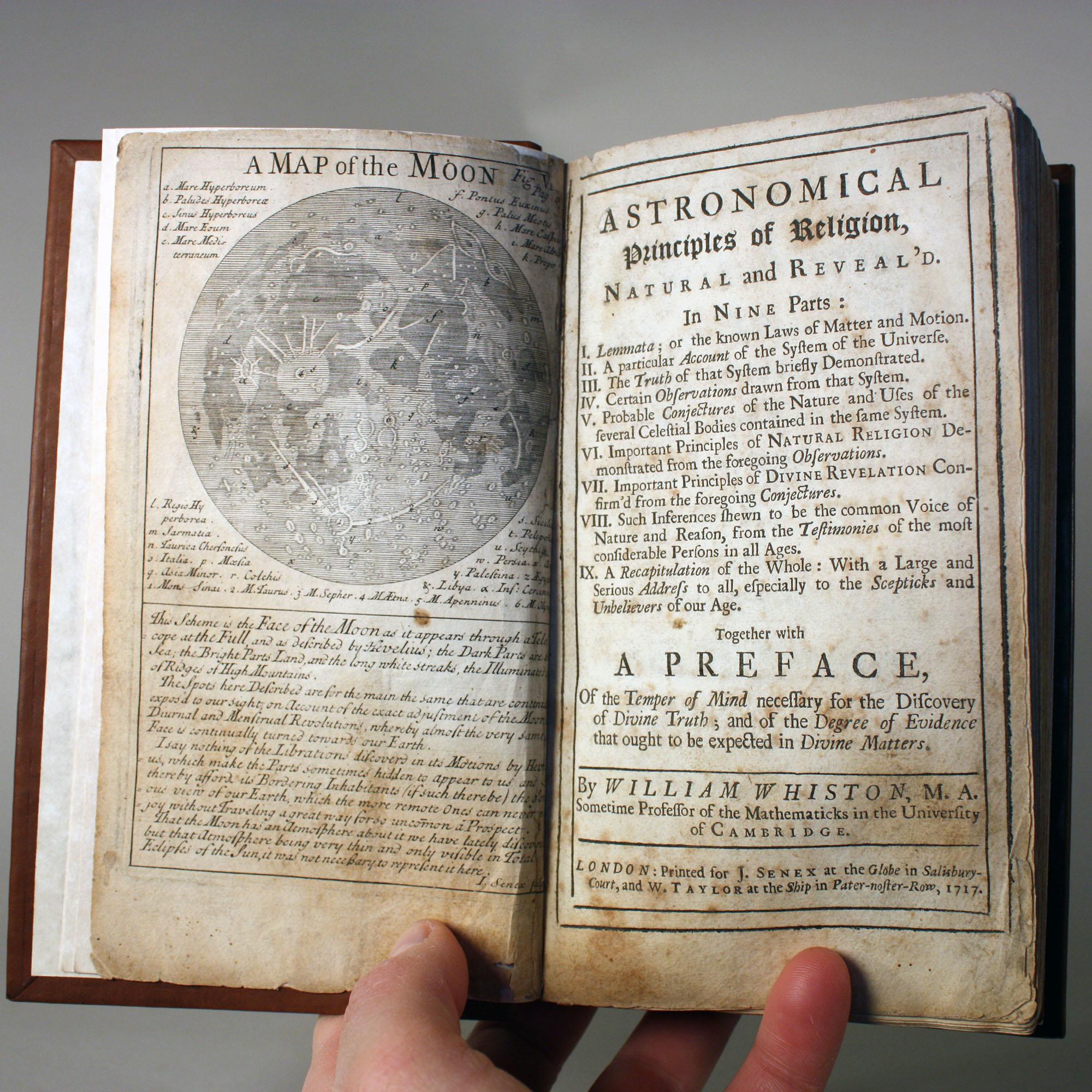 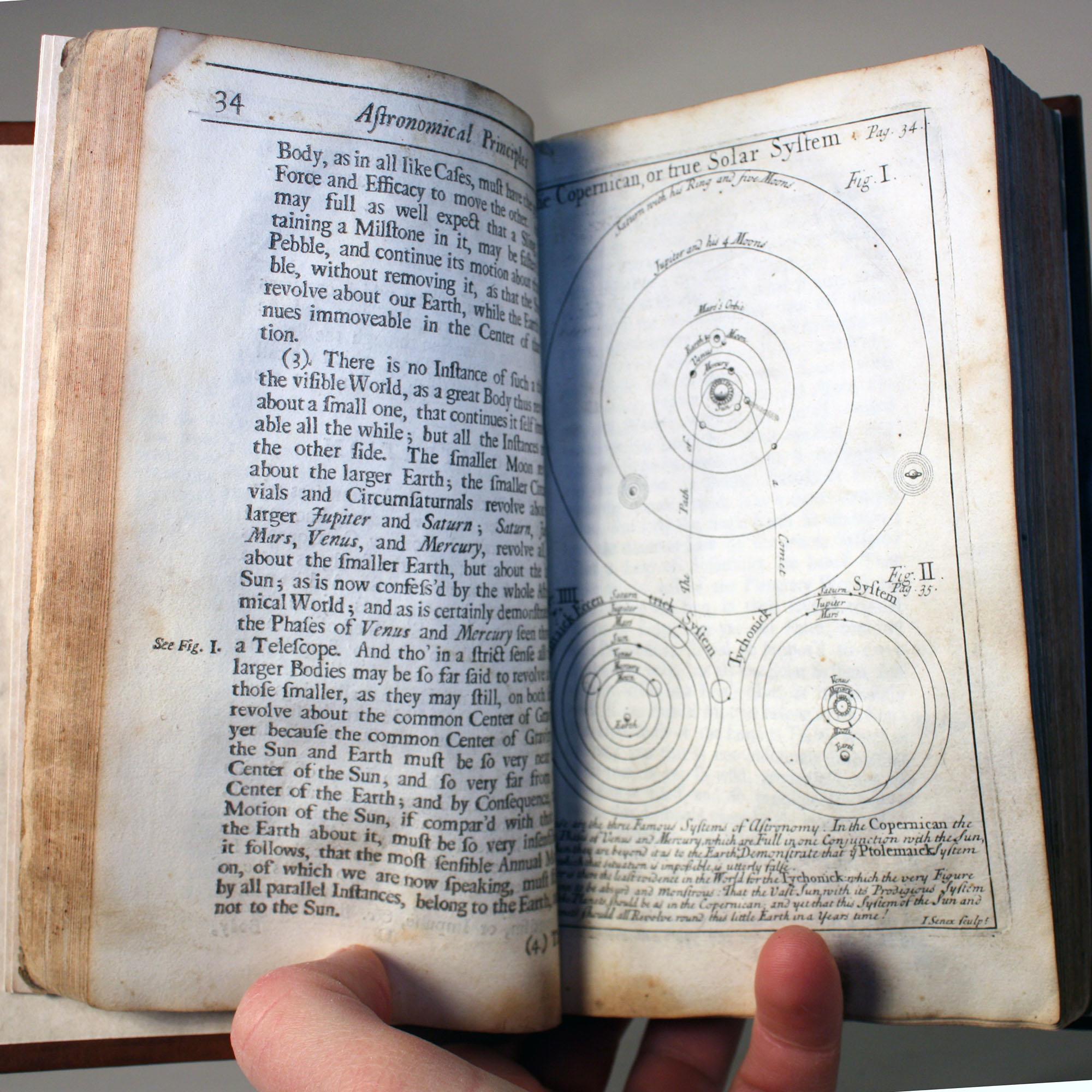 Whiston, William (1667-1752).  Astronomical principles of religion, natural and reveal'd: In nine parts ... together with a preface, of the temper of mind [and Degree of evidence] necessary for the discovery of divine truth [with] The Cause of the Deluge Demonstrated.  London: Printed for J. Senex, and W. Taylor, 1717.  First edition.  xxxij + 304 + 16 pp. + 7 plates.  Twelve pages of the publisher’s catalogue, seldom encountered, are included at the rear; a final leaf of the catalogue is lacking. Some staining to pages; contents very good. Bound in full recent calf.

A student of Isaac Newton at Cambridge, Whiston (1667-1752) mixed science and religion as freely as his master. Continuing his studies while serving as a vicar, he returned to Cambridge in 1702 to succeed Newton as Lucasian Professor of mathematics. His heterodox views, particularly concerning the Trinity, led to his dismissal 8 years later.  The Dorsa Whiston, a wrinkle ridge system in the Moon's Oceanus Procellarum, is named in his honor.

Whiston's Astronomical principles of religion, his last major work, is dedicated to Newton, and represents the culmination of over 25 years of obsessive synthesis.  After offering a crash course in Newtonian physics and astronomy, complete with charts and figures, Whiston argues that the entire system offers incontrovertible proof for the existence of a rational and benevolent creator "well skilled" in geometry and physics. Whiston extended his argument from design to the present maintenance of the cosmos. The deity, he noted, serves not simply as an inventor but also as a superintending engineer who continually acts to preserve the mechanical system.

While hewing closely to Newton's principles on scientific and mathematical grounds, Whitson deviates periodically to offer his personal conjectures. For example, in this work he speculates on the existence of extraterrestrial life, including beings that inhabit comets, beings that dwell in the interior "Central Cavities" of the earth and other and planets, as well as odd gaseous creatures circulating in planetary atmospheres that anticipate some of the forms of alien life encountered by the crew of the starship Enterprise:

The Air expanded about the several Planets, which, as to their Elastical Parts, are corporeal, but invisitble, appear to be the proper Places for the Habitation of not wholly Incorporeal, but Invisible Beings; or of such as have Bodies made of too subtle and aerial a Texture and Constitution to be ordinarily seen by our Eyes, or felt by our Hands.

In The Cause of the Deluge Demonstrated, appended to this edition but omitted from later printings, Whiston harmonizes Scripture with science by arguing that Noah’s flood was engineered by a comet hitting the earth. The comet was, of course, divinely guided.

An interesting work richly indicative of Newton's impact on his contemporaries, as well as early speculation about alien life forms.