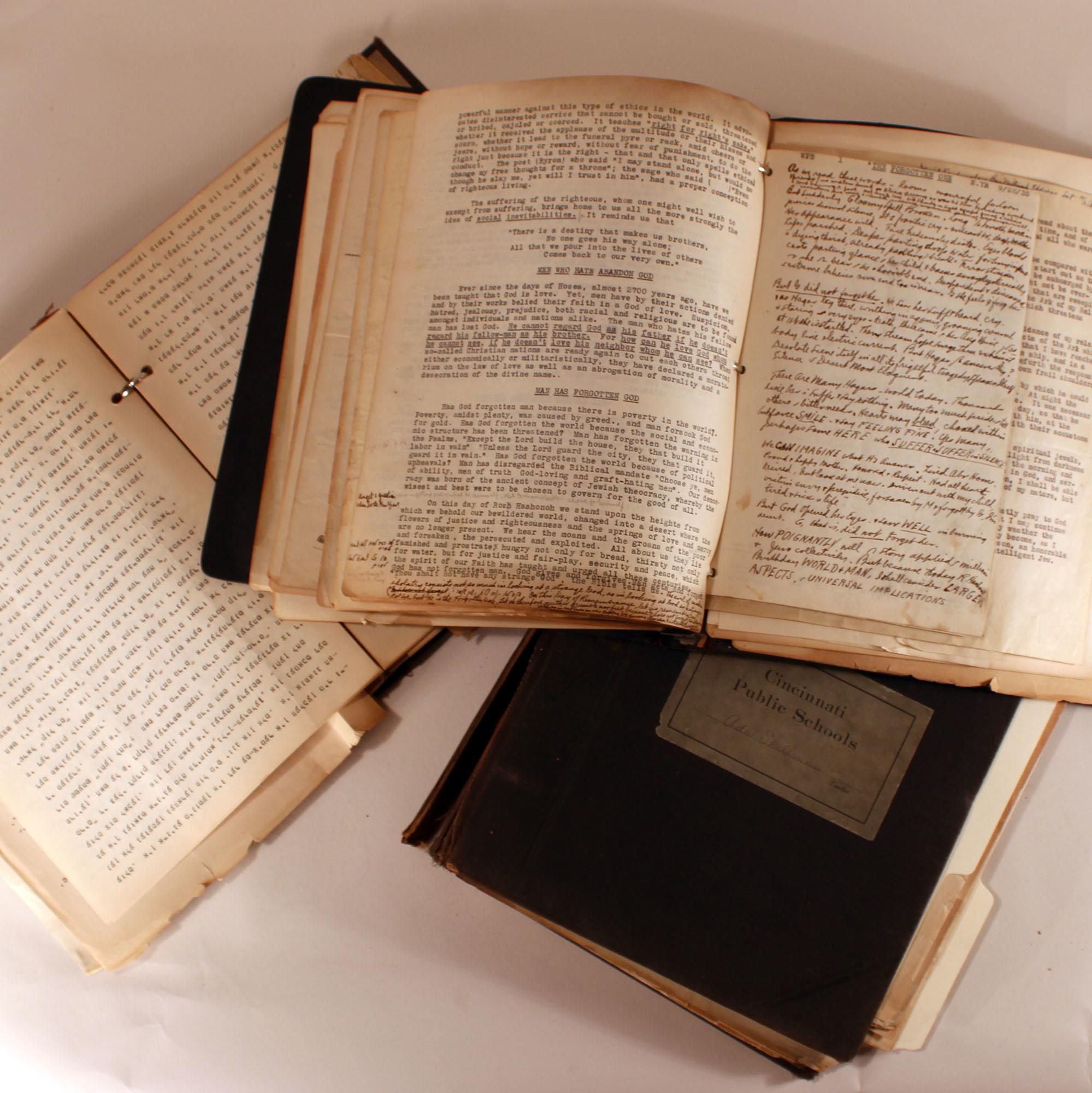 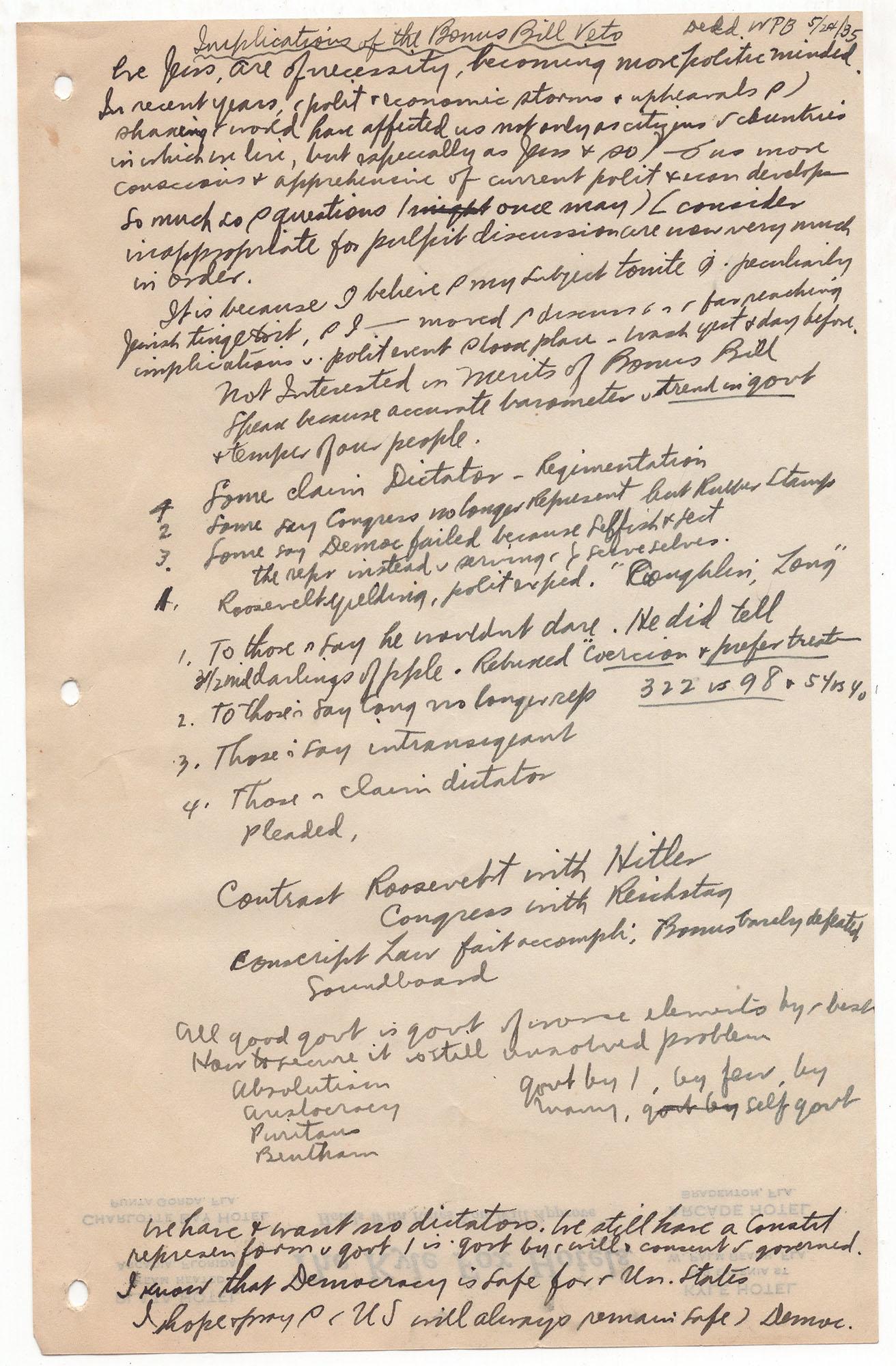 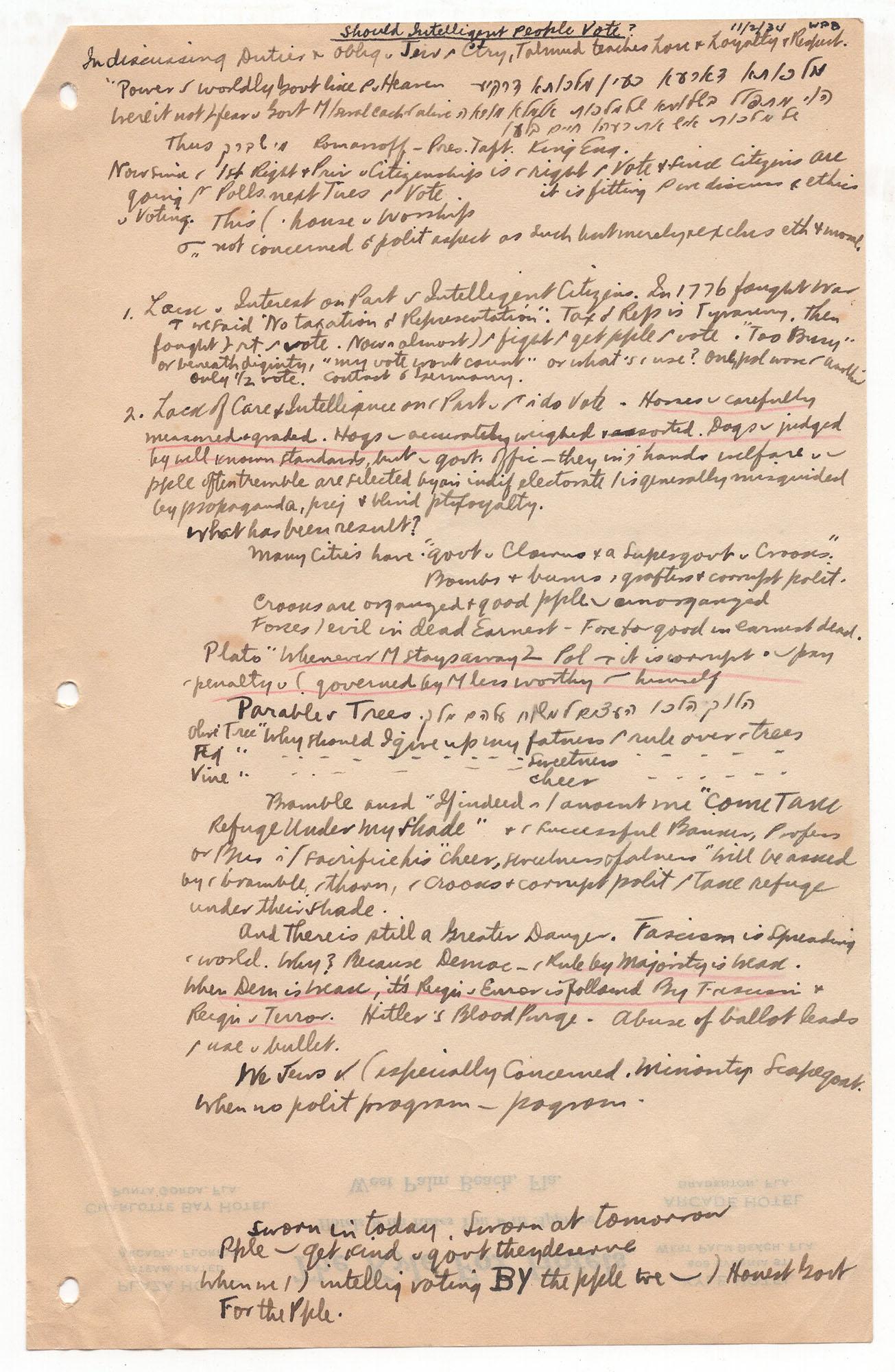 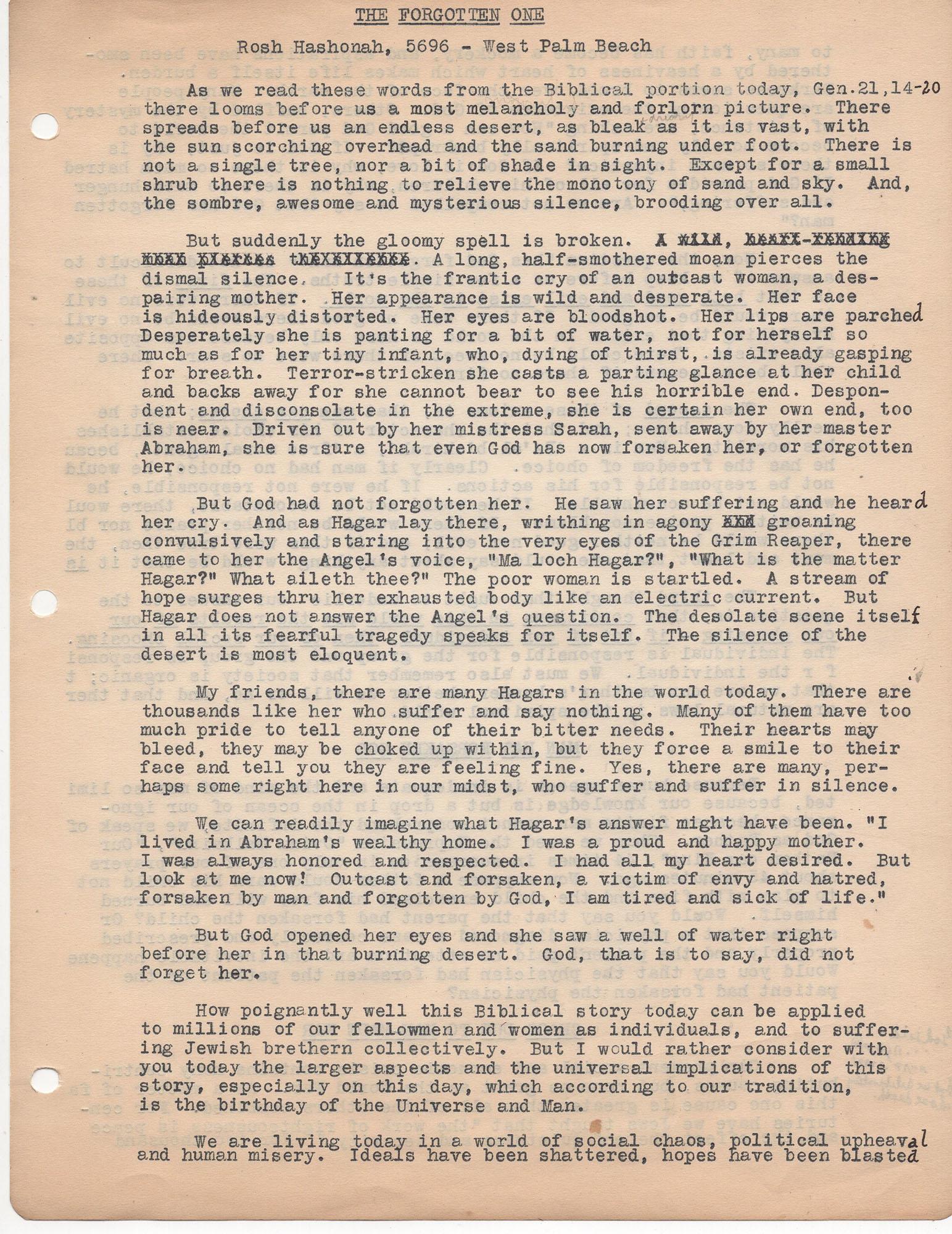 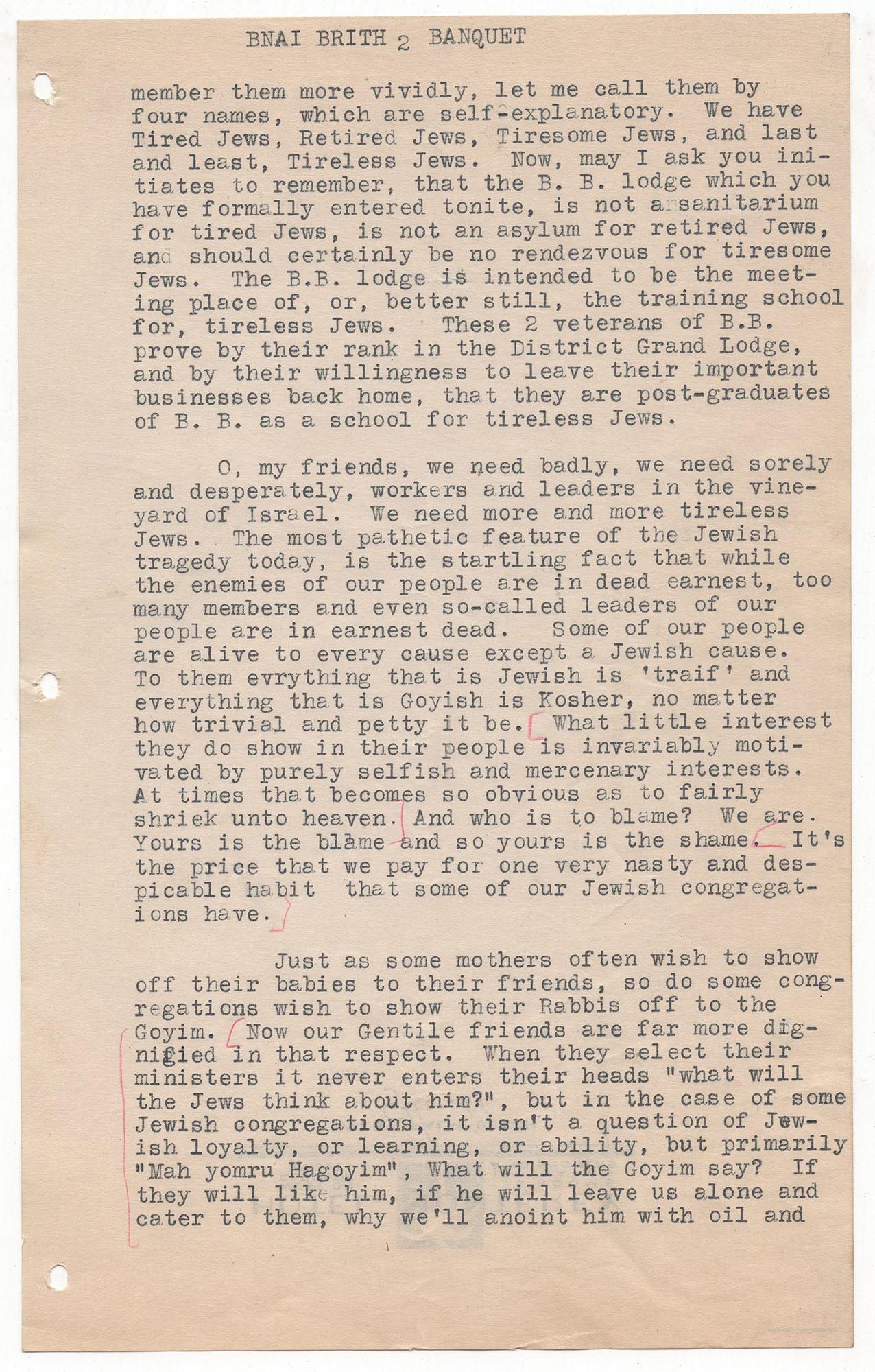 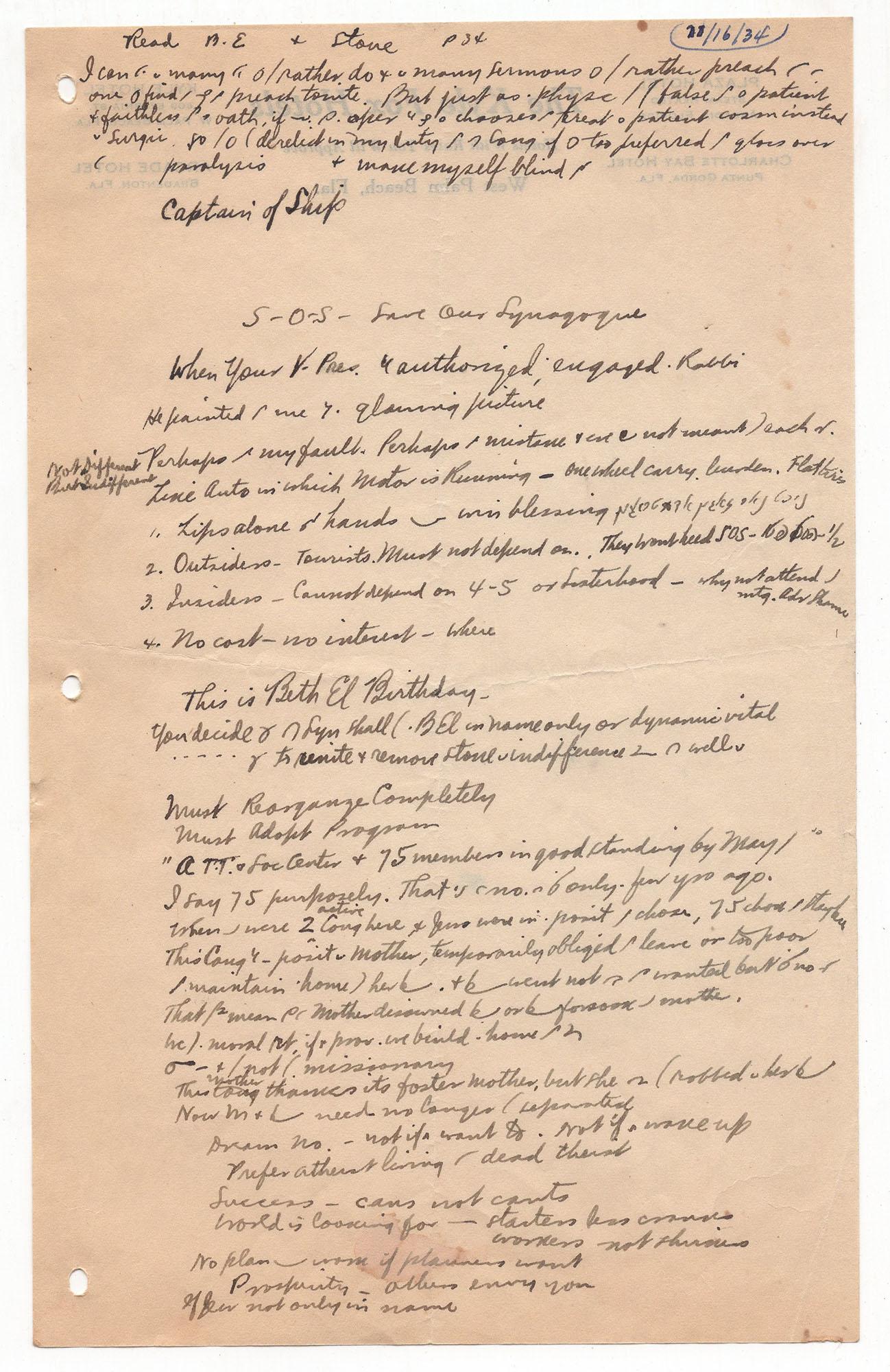 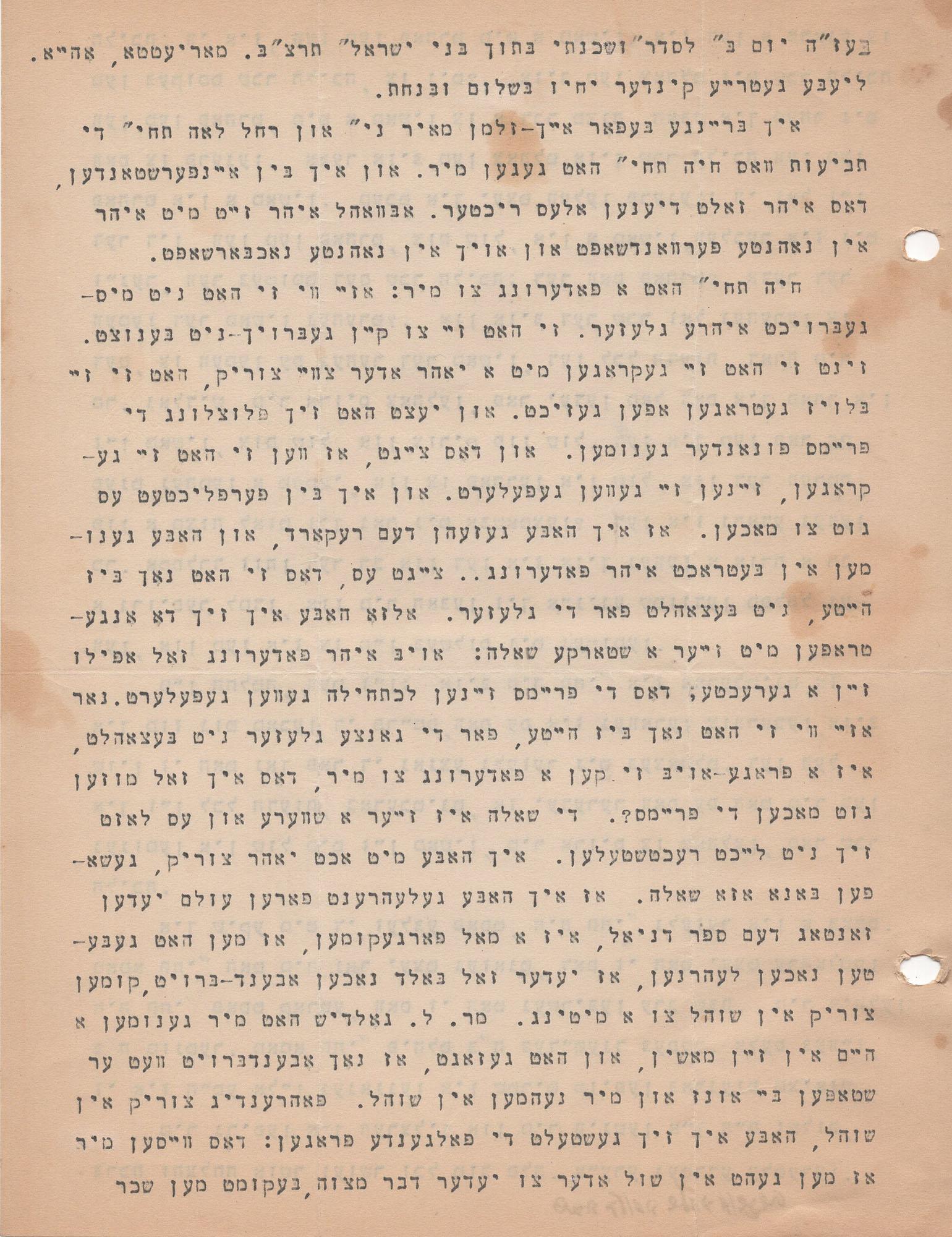 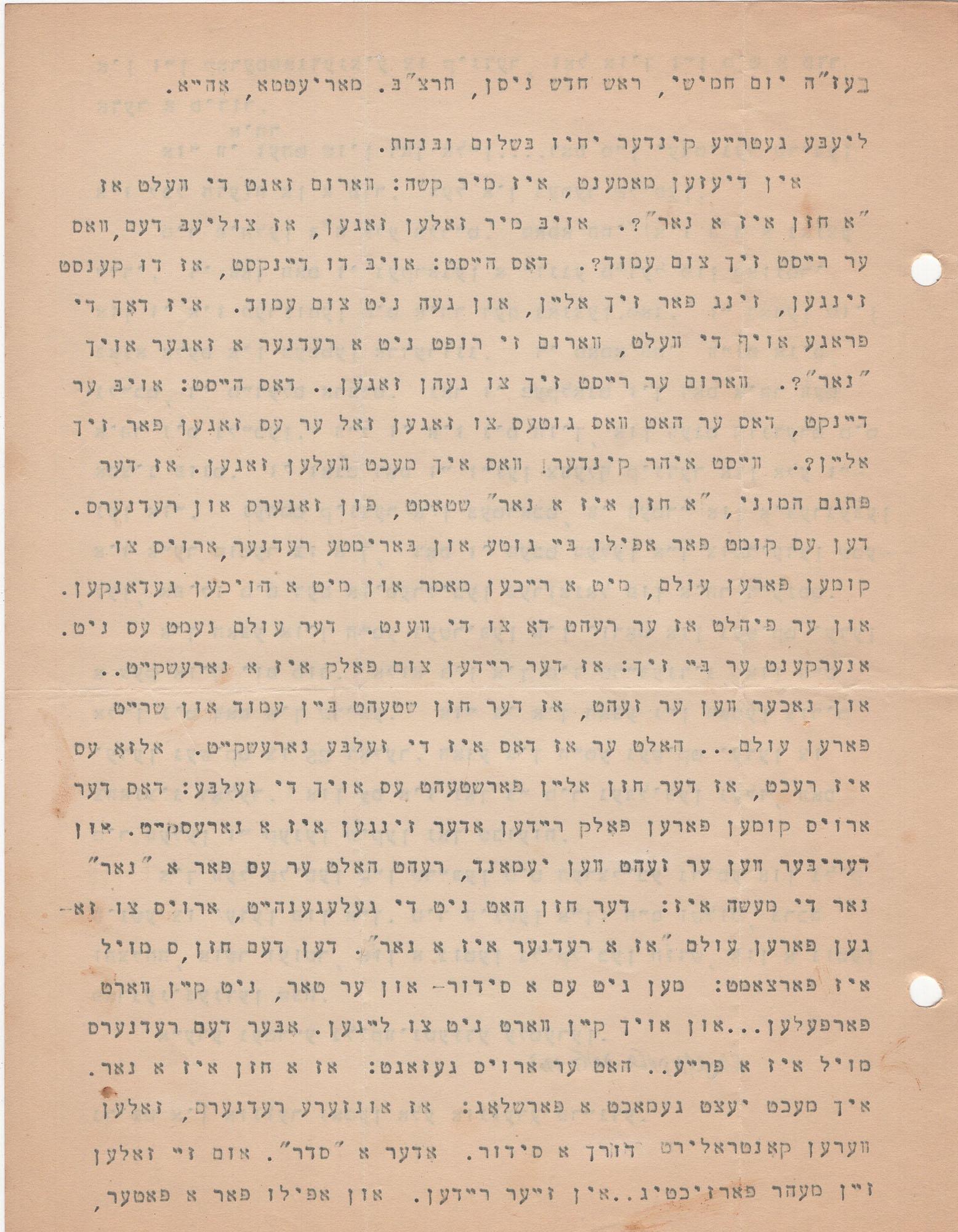 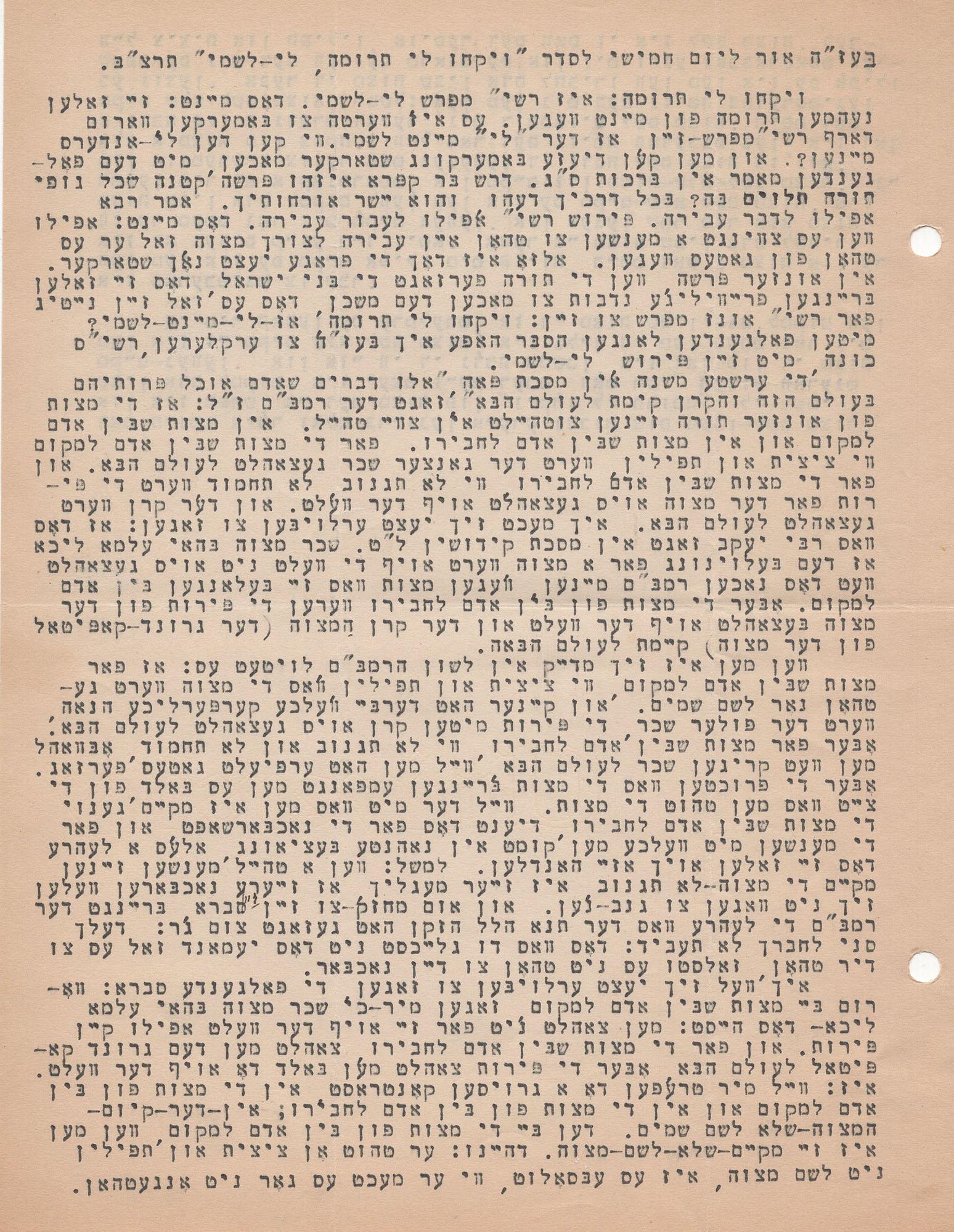 Muskat, Shlomo “Samuel” (1873-1962) and Muskat, Isser W[olfe] (1902 – 1949). Family archive of a pious Latvian immigrant in Marietta, Ohio, and his son, who served as an Orthodox rabbi in Florida, 1928-1938. Over 500 pages of correspondence and manuscripts in Yiddish and English, both typewritten and holograph. Bound as found in three original three-ring binders, rather worn, and housed in a single archival case, 0.5 linear feet.

A fascinating collection of material from the 1930s relating to two members of a immigrant family highly active in the Jewish community in Ohio and elsewhere. The archive includes over 200 letters from the patriarch of the family, Dr. Shlomo “Samuel” Muskat, and manuscripts for over 50 sermons and speeches by his second son, Isser, who served for a decade as an Orthodox rabbi in West Palm Beach and elsewhere.

The Muskats emigrated from Alt-Autz (Auce), Latvia, in two waves. In 1907, Shlomo Muskat and his wife Tzipa (called “Celia”) made the first trip over. Tzipa returned to Latvia, and in 1911 she brought their children: Myer (b. 1898), Tzira “Caroline” (b. 1899), Isser (b. 1902) [1], Chaye “Clara” (b.1903), Rachel “Ruth” (b. 1905), Itzik “Isidor” (b. 1906), and Moishe “Morris” (b. 1908). The family settled in Marietta, Ohio, where Shlomo established himself as an optometrist. The 1920 census identifies the primary language of the Muskat family as German, but this surely means Yiddish. The family was Orthodox, and highly active in the community – Shlomo and his children appear frequently in the pages of the American Israelite and other local Jewish publications. 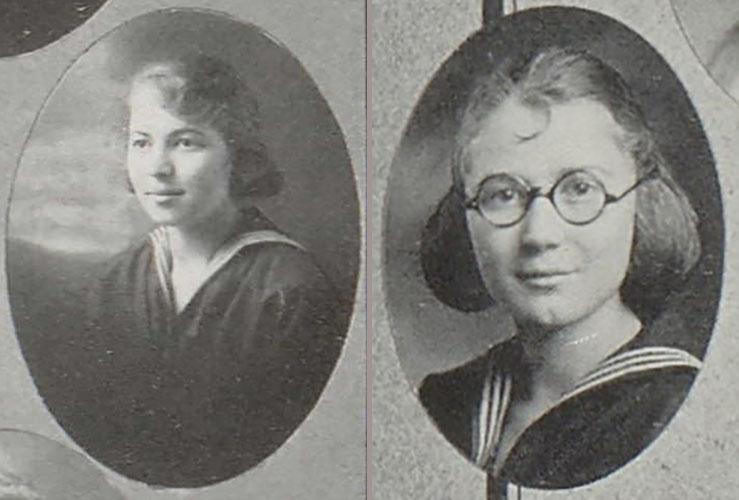 The bulk of Shlomo Muskat’s letters, which are all in Yiddish, date from 1929-1932 and sent from מאריעטטא׳ אהייא (Marietta, Ohio). Most are addressed to Chaya and Rachel, who had recently moved 200 miles west to Cincinnati lto lead the Avondale Synagogue Religious School. In 1932 the sisters left for Palestine, where they would live until 1934.  Although Shlomo had certainly heard Rabbi Eliezer’s harsh judgment that “whoever teaches his daughter Torah, it is as if he taught her tiflut,” he was clearly of a dissenting opinion. His letters, which invariably open with a formulaic benediction along the lines of געטרייע קינדער יחיו בשלום ובנחת (My dearly beloved children, that they may live in peace"), are full of references to the Mishnah and the Talmud. Shlomo also sent his daughters copies of the sermons that he delivered on the Days of Awe and other occasions at Congregation B’nai Israel, Washington Avenue Temple. Writing as an immigrant during the depths of the Great Depression, Shlomo repeatedly expresses a profound respect for entrepreneurship as he encourages his family towards financial success in the new world.

While all of Shlomo’s children honored the faith of their father, one made it his vocation, at least for a while. Isser Muskat, Shomo’s third child and #2 son, took classes at the University of Cincinnati and received his B.A. at Marshall College (now Marshall University) in 1923. While a student he served as rabbi of the B’nai Israel synagogue in Huntington, West Virginia (which in 1974 merged with Ohlev Sholom to form B’nai Sholom). He went on to study law at Ohio State University, graduating in 1927. In the spring of 1924 Ohio Jewish Chronicle printed on the front page his contentious articles on Zionism and early childhood education.[2] In August, 1924, he was called to serve as rabbi of Aetz Chayim, a congregation of almost 50 souls in Danville, Virginia. But things went poorly. By July 1925 he left amid controversy. The local newspaper promised he would deliver a farewell address, “Who’s Who Under the Mask in a Glaring Exposure of Danville Jewry.” Anticipating fireworks, the paper noted that no one under age 16 was to be admitted, but the event was cancelled. 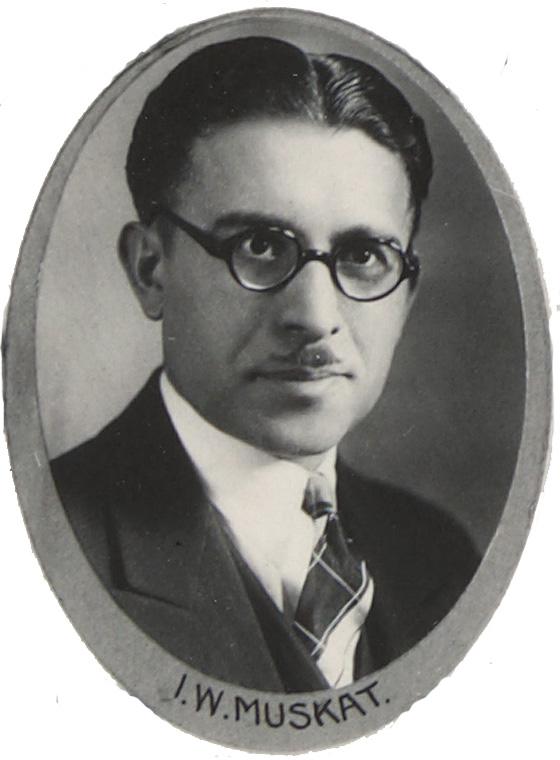 Isser W. Muskat, from the composite photograph of the of the class of 1927, Moritz School of Law, Ohio State University

Returning to his legal studies, Muskat threw himself into Jewish student life at OSU, joining the Menorah Society, Hillel, and Avukah, He led weekly discussions on “Present-Day Jewish Problems” and delivered sermons at Temple Israel. In August 1925, he attended the 14th World Zionist Congress in Vienna. In May 1927, the Ohio Jewish Chronicle carried an article on Muskat’s plans to conduct a sightseeing tour through Europe, Egypt, and Palestine. In December 1927 he was elected president of Columbus Zionist District.

In 1928, Muskat accepted a call to serve as rabbi of Temple Beth Israel in Niagara Falls, where he remained until 1935 (later sources that suggest his tenure ended earlier are in error). The Niagara Falls Gazette, which often printed notices of Muskat’s activities, offered a lengthy summary of his Yom Kippur sermon in September 1928. In 1931, the congregation decided to affiliate with the United Synagogue of America, and replaced Muskat with a Conservative rabbi. Muskat appears to have continued at Beth Israel as minister to its Orthodox membership, at least on an occasional basis. He is mentioned in the Gazette in connection with the congregation as late as May 1935.

In August 1934, Muskat was appointed rabbi at Temple Beth El in West Palm Beach. While he appears to have been successful – his services were frequently reported in the Palm Beach Post, his tenure was short. The Jewish Floridian reported his resignation on 31 January 1936, after only 15 months on the job. “Dr. Muskat, no longer connected with Beth El, will remain in the city for a while,” the paper noted.

With this latest disappointment, Muskat decided to shift gears, quite literally. In October 1935, the rabbi had won a brand new Chevrolet Master DeLuxe four door sedan in a nationwide contest sponsored by the Liggett Company for coming up with the slogan “Save More at the Rexall Store, Where Drugs are Pure and the Service Sure.” He decided to pursue a career in business. Included in the collection are drafts of letters to prospective employers, and entries for other contests writing slogans and sales pitches. August 1937 found him working at a movie theater in Portsmouth, Ohio – there are forms for box office receipts for the local showing of Ecstasy. In September 1937 he was in Chicago, and defining himself as “a sales manager … with 15 years of highly valuable experience in Selling, and Sales management.” He appears to have found work at the Odgen Tire & Rubber Co. By 1940 he was proprietor of Winner Tire and Radio, a retail shop on 2216 Cicero Avenue in Cicero, IL. Suffering a small setback in 1945, when thieves broke a window and stole three automobile radios valued at $162.50 (about $2,300 in today’s dollars), he continued at Winner Tire until his premature death at age 47.

Although there are a few items from the period when Muskat was looking for a street, the vast bulk of the material here – over 150 pages -- dates from his ministry in Niagara Falls and West Palm Beach. Written chiefly in English (with some Yiddish) in an easily legible hand, they include dozens of sermons for the high holy days and other major celebrations, weekly addresses, speeches delivered at B’nai B’rith clubs and Junior Hadassahs, and talks given at brises, bar mitzvahs, and funerals. Almost all of the manuscripts are dated, with notes on where they were delivered -- e.g. "W[est] P[alm] B[each], Kol Nidre, 1935"

Muskat's topics cover a range of theological topics and political themes. Among the former such speeches as “The Immortality of the Jew,” "Do we need religion today?,” and “The ideal rabbi.” His contemporary topics include the NRA, the Berlin Olympics, the Bonus Bill veto, and the rise of fascism (one of his sermons takes Sinclair Lewis’s It Can’t Happen Here as a starting point). The difficult economic climate provides the setting for such sermons as " 'Money Talks': What Does It say, and What Should It Say?" His pugnacious spirit – witnessed in Danville, Virginia, and probably a factor in his frequent moves, shines through in a number of these sermons. For example, in a speech on “Is Christmas a Jewish holiday,” he writes,

Shall the Jew kiss the whip that tortured him? Shall the Jew rejoice over the brutal death of his forefathers? Of course I know that not all Christians who observe their Xmas hate the Jew. It is enuf that there are still many bigots & fanatics who do….

Notes for another sermon are titled, "How Shall Jews Defend Themselves?" The situation in Germany overshadows a number of Muskat's talks, and among the ephemera included here is his marked up copy of a 1935 article on the Nuremberg Laws from Der Tag.

The Muskat family papers offer a deep dive into the spiritual lives and political sensibilities of Jewish immigrants in Ohio during the Great Depression, and present ample opportunity for further study.

[1] The registrar's office at Ohio State University lists Muskat's birth year as 1900, but most other sources have 1902.