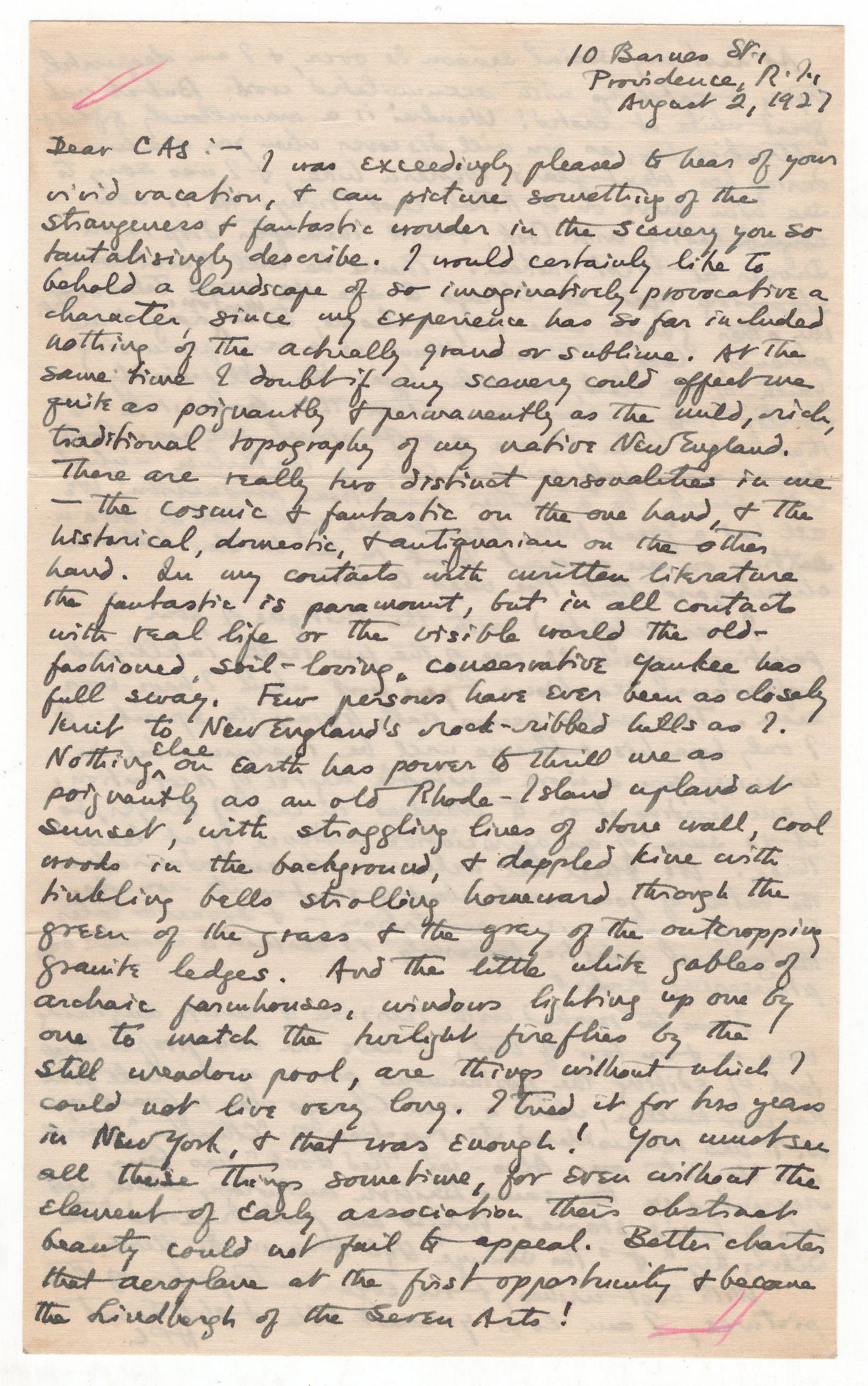 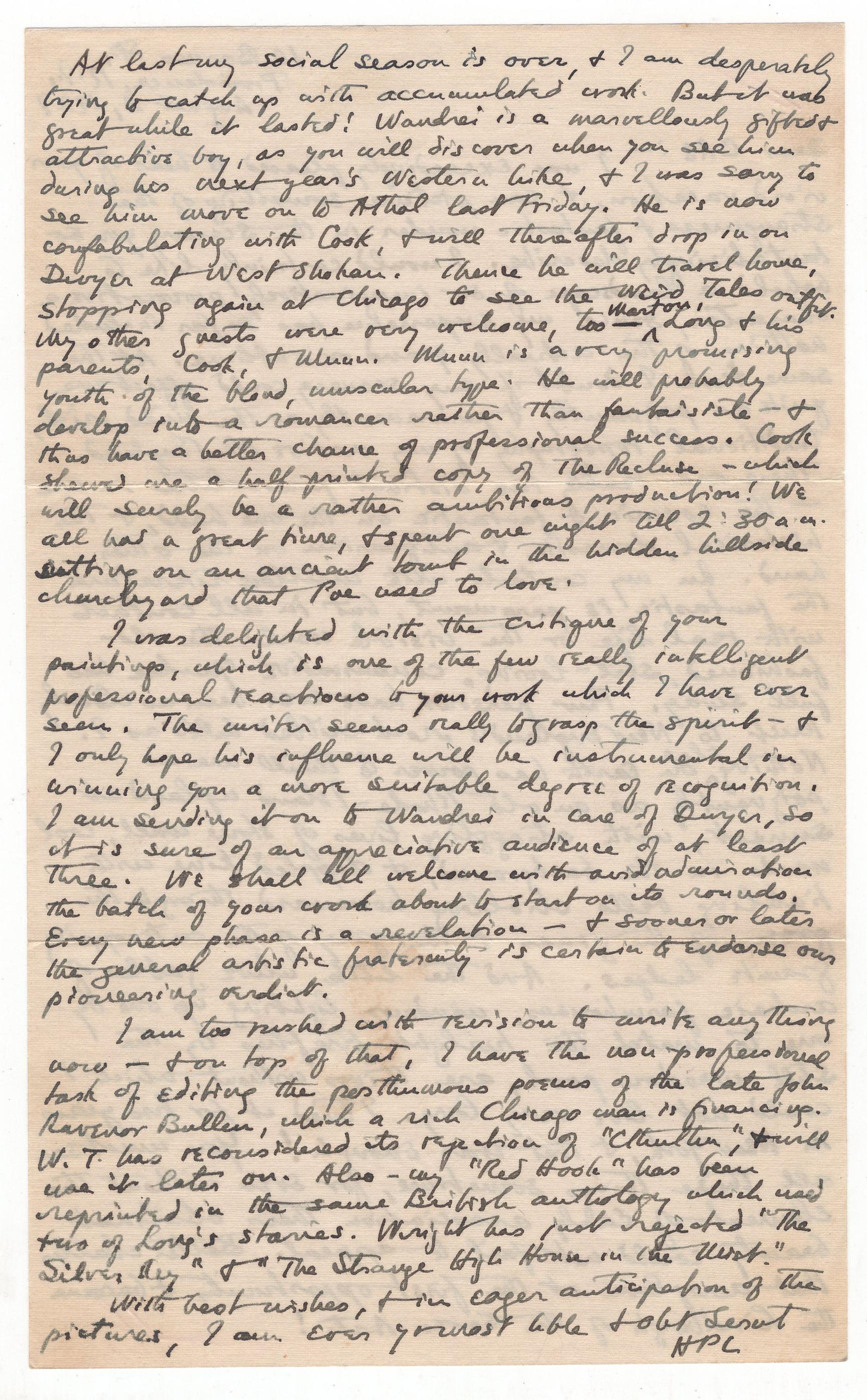 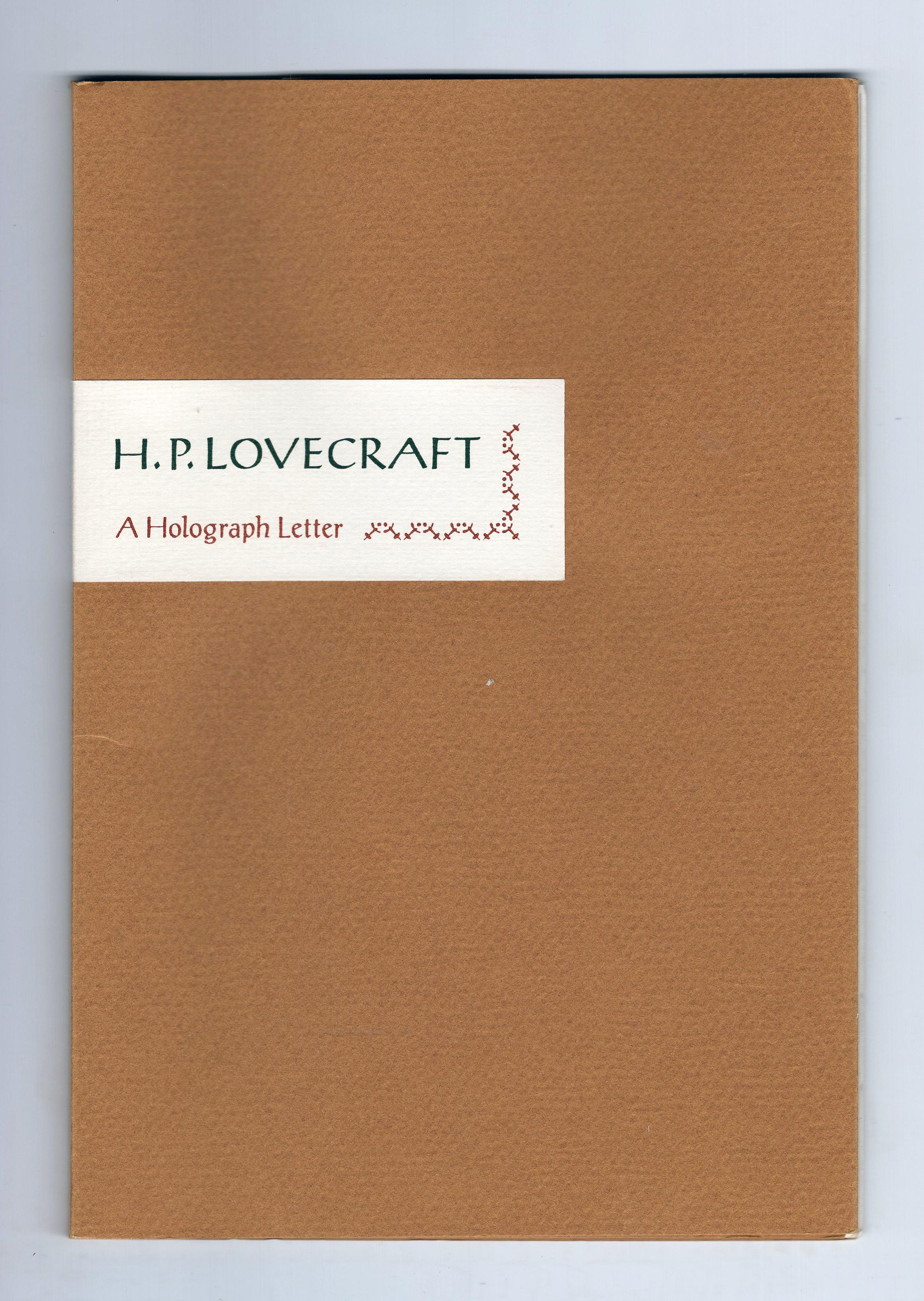 Lovecraft, Howard Phillips (1890-1937). Autograph letter to Clark Ashton Smith, 2 August 1927, 2pp. covering both sides of a single leaf. Light marks in red pencil to first page made in the context of preparing the Arkham edition of Lovecraft’s Selected Letters, which reprinted this in part. Housed in a very handsome printed presentation folder prepared by Roy A. Squires.

A superb letter sent from HPL’s residence at 10 Barnes Street, rich with evocative description of Providence, a highly suggestive invocation of his early circle, and a discussion of his current projects, among which was his first foray into the Cthulhu mythos.

"[Weird Tales] has reconsidered its rejection of 'Cthulhu'"

Lovecraft initiated his long friendship with Clark Ashton Smith (1893-1961) with a fan letter he sent to the California poet in 1922, and their rich correspondence ended only with Lovecraft's death in 1937. This particular letter is surely one of the best. It was written in the summer of 1927 shortly after succession of visits from his young acolytes. First was Donald Wandrei (1908-1987), whom Lovecraft describes in this letter as "a marvelously gifted & attractive boy"  Hitchiking from St. Paul, Minnesota, Wandrei arrived on July 12 and stayed for more than two weeks before leaving to visit other people in Lovecraft's circle, including Bernard Austin Dwyer (1897–1943). Joining Wandrei and Lovecraft in Providence on the 19th were two members of the Kalem Club, James F. Morton (1870-1941) and Frank Belknap Long (1901-1994). They were joined on the 23rd by W. Paul Cook (1881-1948), who brought his protégé, H. Warner Munn (1903-1981), whom HPL here describes as "a very promising youth of the blond muscular type." As Lovecraft scholar S. T. Joshi relates, Lovecraft took his guests to visit the house that inspired "Pickman's Model." Together they hunted geological specimens in a quarry, and engaged in an ice cream eating contest. "We all had a great time," he writes in this letter to Smith, "& spent one night till 2:00 a.m. sitting on an ancient tomb in the hidden hillside churchyard that Poe used to love." Lovecraft would later celebrate that "sequester'd Providence churchyard" in an acrostic poem to Edgar Allan Poe.

"There are really two distinct personalities in me — the cosmic & fantastic on the one hand, & the historical, domestic, & antiquarian on the other hand."

Lovecraft opens the letter with a rhapsodic description of Rhode Island, which he contrasts with Smith's descriptions of northern California. "I would certainly like to behold a landscape of so imaginatively provocative a character," he writes. But "At the same time I doubt if any scenery could affect me quite as poignantly & permanently as the mild, rich, traditional topography of my native New England." The reason for this, he notes in a fascinating moment of introspection, is that "There are really two distinct personalities in me — the cosmic & fantastic on the one hand, & the historical, domestic, & antiquarian on the other hand."  Singing the praises of Rhode Island in glowing terms, he urges Smith to visit. "Better charter that aeroplane at the first opportunity & become the Lindbergh of the Seven Arts!" Alas, the two were destined never to meet.

Lovecraft expresses enthusiasm for an article on Smith's art, and tells him about his own progress, mentioned a number of important works. Most significantly, he discusses “The Call of Cthulhu," his first foray into the mythos that would define his most lasting legacy. Initially rejected by Weird Tales, the story would finally see publication in February 1928 -- six months after the date of this letter. Lovecraft also remarks on “The Horror of Red Hook,” which was slated to be reprinted in a British anthology of horror stories, as well as “Through the Gates of the Silver Key,” written in collaboration with E. Hoffmann Price (1898-1989) and not published until 1934, and "The Strange High House in the Mist," which would be published in 1931. He mentions also The Recluse, a short-lived journal published by Cook to feature members of Lovecraft's circle, and White Fire, a collection of poems by John Ravenor Bullen (1886–1927) edited with an introduction by Lovecraft, and published by Cook in 1927.

An extraordinary letter, touching on so many aspects of HPL's life and work. The full text is below. If you want only one manuscript from Lovecraft in your collection, this beautifully presented letter to Clark Ashton Smith is about as rich and evocative a relic as one could hope for.

I was exceedingly pleased to hear of your vivid vacation, & can picture something of the strangeness & fantastic wonder in the scenery you so tantalisingly describe. I would certainly like to behold a landscape of so imaginatively provocative a character, since my experience has so far included nothing of the actually grand or sublime. At the same time I doubt if any scenery could affect me quite as poignantly & permanently as the mild, rich, traditional topography of my native New England. There are really two distinct personalities in me — the cosmic & fantastic on the one hand, & the historical, domestic, & antiquarian on the other hand. In my contacts with written literature the fantastic is paramount, but in all contacts with real life or the visible world the old-fashioned, soil-loving, conservative Yankee has full sway. Few persons have ever been as closely knit to New England's rock-ribbed hills as I. Nothing else on earth has power to thrill me as poignantly as an old Rhode-Island upland at sunset, with straggling lines of stone wall, cool woods in the background, & dappled kine with tinkling bells strolling homeward through the green of the grass & the grey of the out-cropping granite ledges. And the little white gables of archaic farmhouses, windows lighting up one by one to match the twilight fireflies by the still meadow pool, are things without which I could not live very long. I tried it for two years in New York, & that was enough! You must see all these things sometime, for even without the element of early association their abstract beauty could not fail to appeal. Better charter that aeroplane at the first opportunity & become the Lindbergh of the Seven Arts!

At last my social season is over, & I am desperately trying to catch up with accumulated work. But it was great while it lasted! [Donald] Wandrei is a marvelously gifted & attractive boy, as you will discover when you see him during his next year’s Western hike, & I was sorry to see him move on to Athol last Friday. He is now confabulating with [W. Paul] Cook, & will thereafter drop in on [Bernard Austin] Dwyer at West Shokan. Thence he will travel home, stopping again at Chicago to see the Weird Tales outfit. My other guests were very welcome, too – Morton, [Frank Belknap] Long & his parents, Cook and [H. Warner] Munn. Munn is a very promising youth of the blond muscular type, He will probably develop into a romancer rather than fantaisiste, & thus have a better chance of professional success. Cook shewed me a half-printed copy of The Recluse – which will surely be a rather ambitious production! We all had a great time, & spent one night till 2:00 a.m. sitting on an ancient tomb in the hidden hillside churchyard that Poe used to love.

I was delighted by the critique of your writings [by Harry Noyes Pratt], which is one of the few really intelligent professional reactions to your work which I have seen. The writer seems really to grasp the spirit -- & I only hope his influence will be instrumental in winning you a more suitable degree of recognition. I am sending it on to Wandrei in care of Dwyer, so it is sure of an appreciative audience of at least three. We shall all welcome with avid admiration the batch of your work about to start on its rounds. Every new phase is a revelation -- & sooner or later the general artistic fraternity is certain to endorse our pioneering verdict.

I am too rushed with revision to write anything now -- & on top of that, I have the non-professional task of editing the posthumous poems of the late John Ravenor Bullen, which a rich Chicago man is financing. W. T. [Weird Tales] has reconsidered its rejection of “[The Call of] Cthulhu,” & will use it later on. Also – my “[The Horror of] Red Hook” has been reprinted in the same British anthology which used two of Long’s stories. Wright has just rejected “[Through the Gates of] The Silver Key” & “The Strange High House in the Mist.”

With best wishes, & in eager anticipation of the pictures I am ever your most h[um]ble & ob[edien]t Serv[an]t 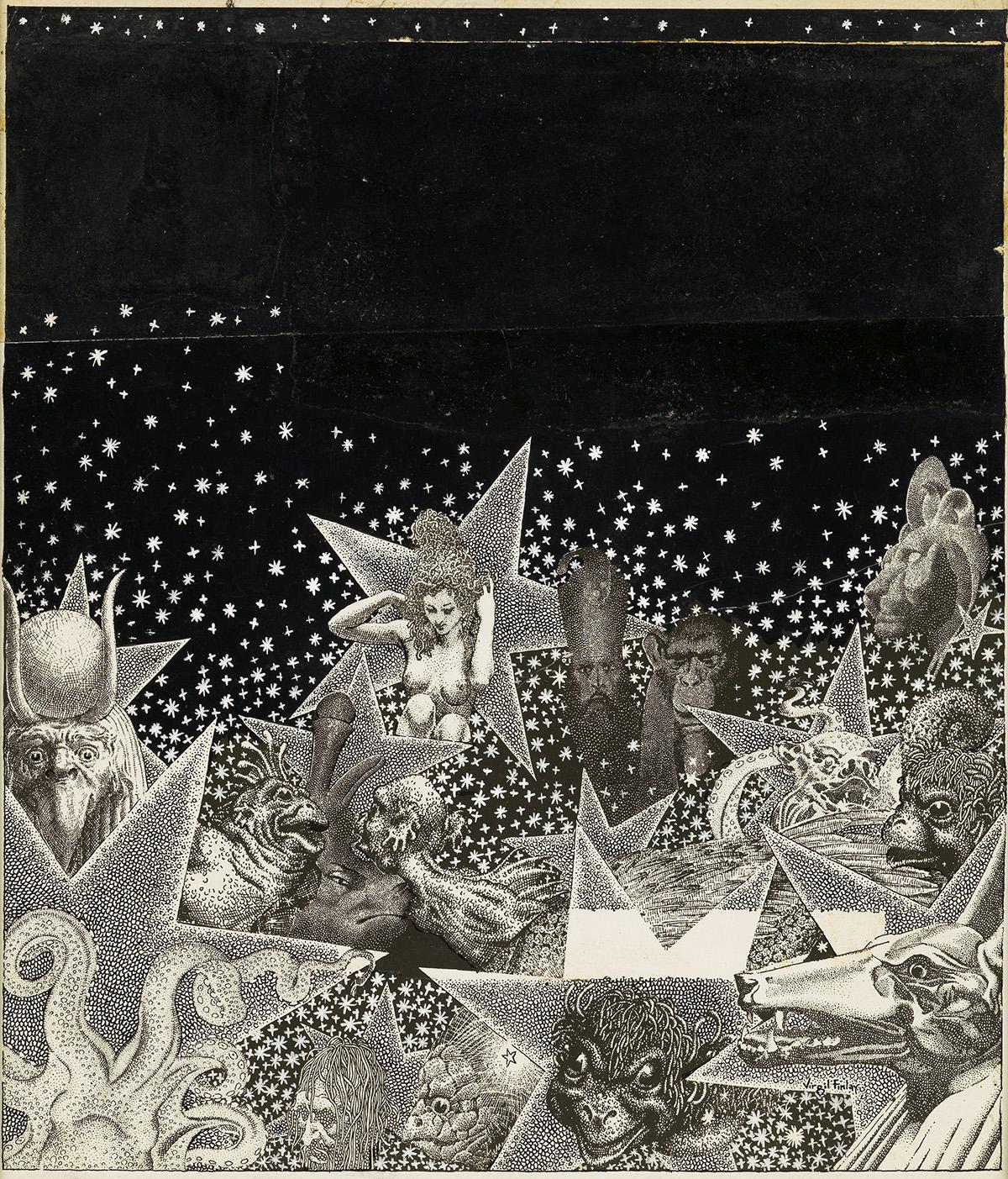 [LOVECRAFT, Howard Phillips] FINLAY, Virgil. The Outsider and Others. Original art for the dust wrapper of the book by H.P. Lovecraft (Sauk City: Arkh... view details
$0
View details
add to wishlistADD TO YOUR BASKET