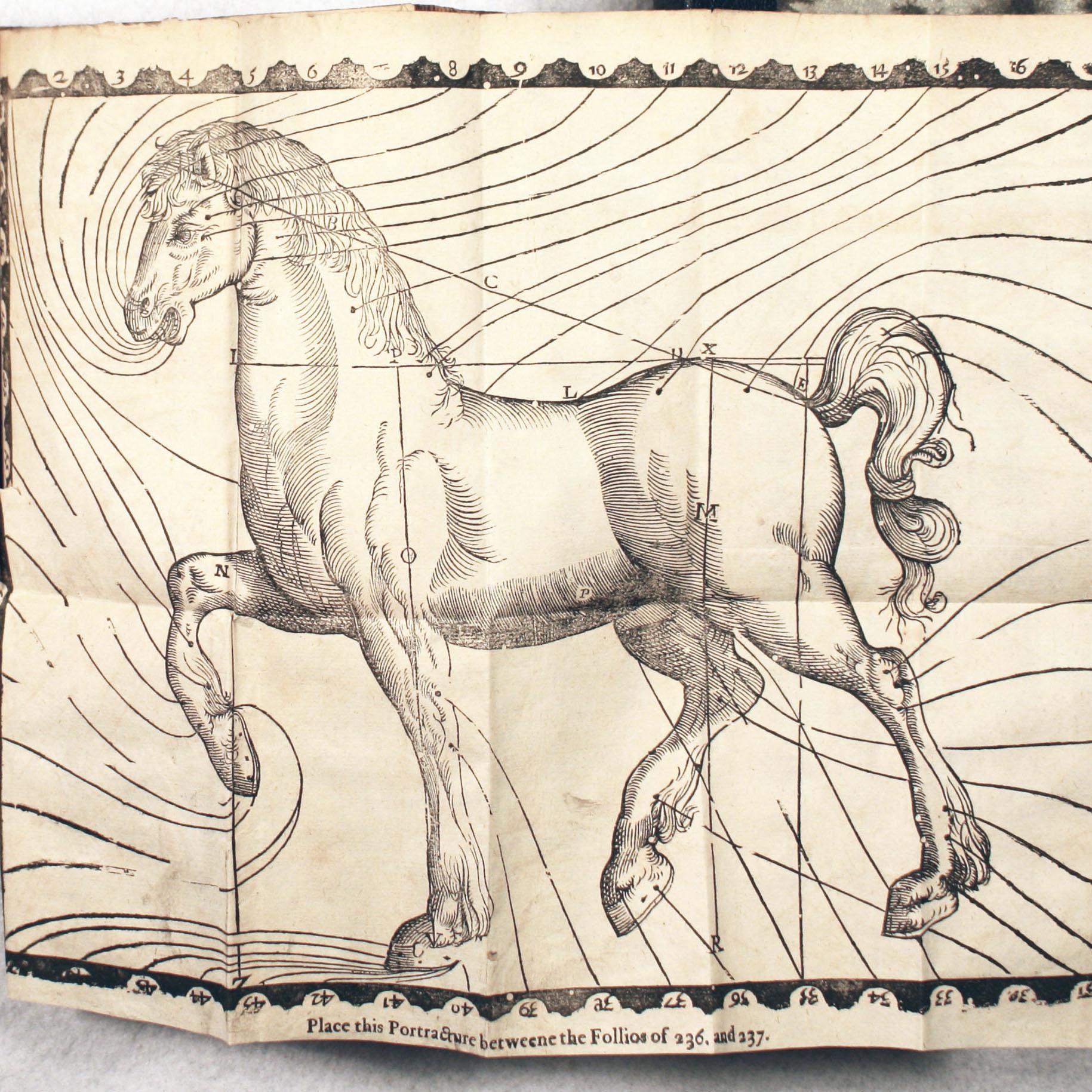 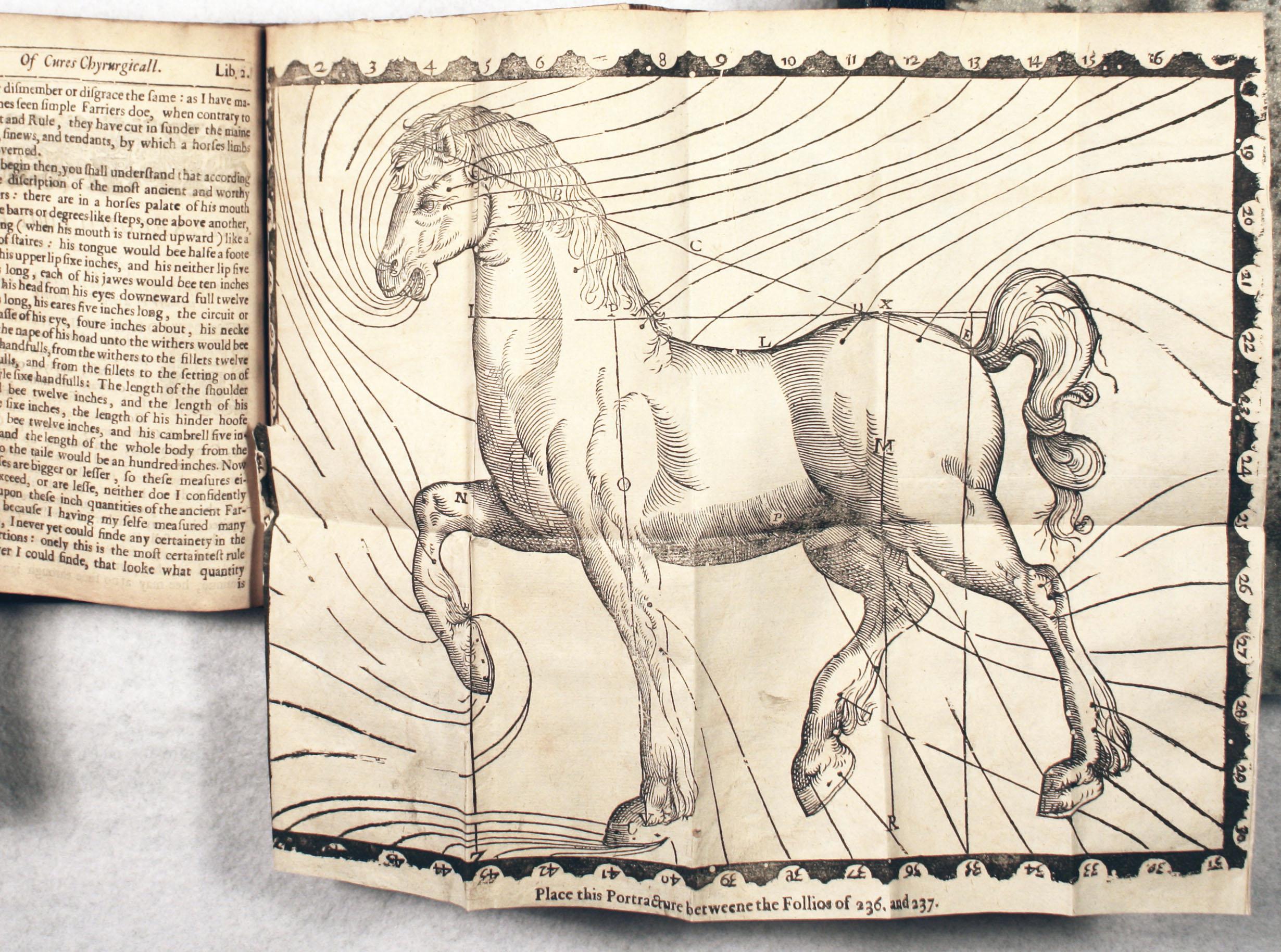 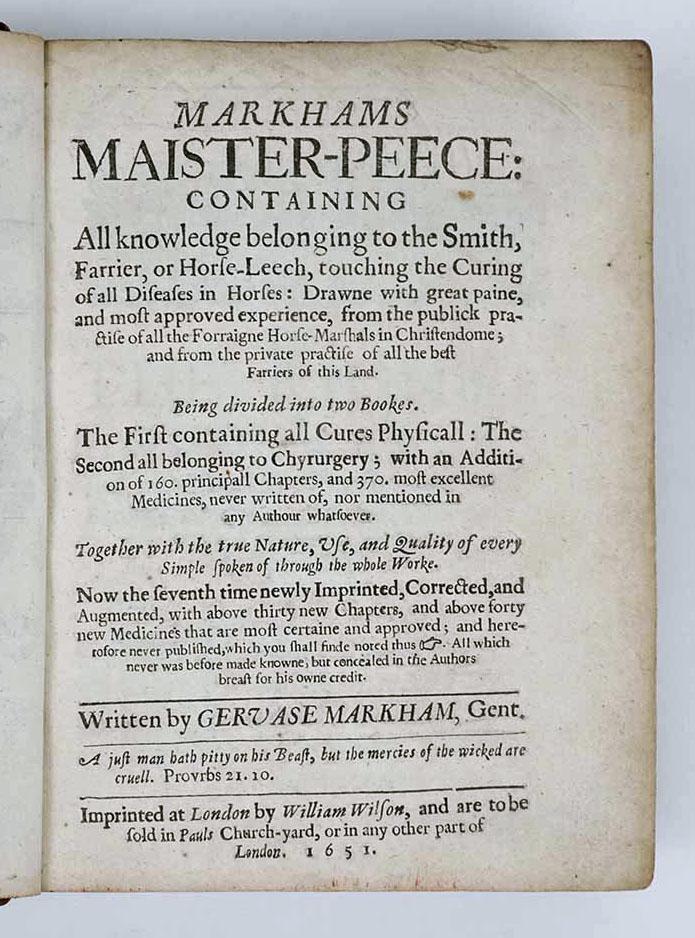 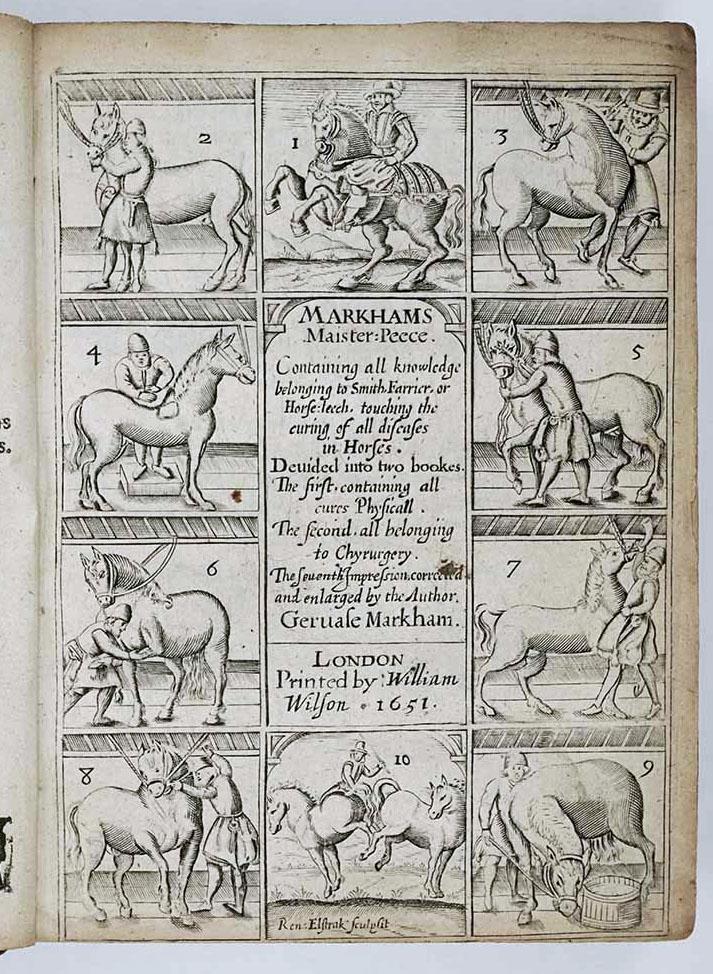 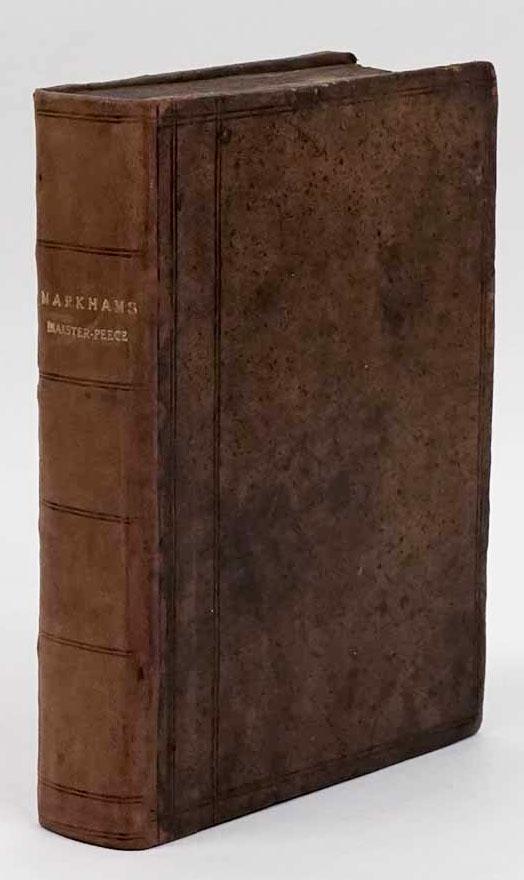 MARKHAM, Gervase.  Markhams maister-peece: containing all knowledge belonging to the smith, farrier, or horse-leech, touching the curing of all diseases in horses: drawne ... from the publick practise of all the forraigne horse-marshals in Christendome; and from the private practise of all the best farriers of this land. Being divided into two bookes. The first containing all cures physicall: the second all belonging to chyrurgery; with an addition of 160. principall chapters, and 370. most excellent medicines, never written of, nor mentioned in any author whatsoever. Together with the true nature, use, and quality of every simple spoken of through the whole worke. Now the seventh time newly imprinted, corrected, and augmented, with above thirty new chapters, and above forty new medicines that are most certaine and approved; and heretofore never published, which you shall finde noted thus [pointing hand]. All which was never before made knowne, but concealed in the authors breast for his owne credit. London: William Wilson, 1651. [16], 591, [21] p., pagination erratic,: divisional title conjugate, ill. ; 19 cm. Original 17th century calf scored in blind, rebacked, some foxing throughout, but overall a remarkably well preserved copy with all plates present, including the engraved frontispiece and the splendid large folding woodcut, unsophisticated and in excellent condition.

With the armorial bookplate of William Hanbury, Esq. (1704-1768) of Kelmarsh Hall, Northamptonshire.

An early edition of this great English manual of veterinary medicine first published in 1615, by one of the earliest western owners of and dealers in Arabian horses. Very rare.

Gervase Markham (ca. 1568-1637), served as a soldier of fortune in the Low Countries and Ireland before retiring to his estate to write poetry and practical guides, including books on riding, farriery, animal husbandry, and home economics. His most famous work, however, was Markham’s Maister-peece [Masterpiece].  The volume is divided into two parts.  The first focuses on “physical cures” -- internal physiology and pathology, with an emphasis on herbal and dietary remedies.  The second part covers “chyrurgery” [surgery], injuries and illnesses that required hands-on treatments like bloodletting, purging, and bandaging.  His work was animated by the governing medical philosophies of the day, drawing from botanical observations and humoral theory. One the particular charms of this edition are the small woodcut pointing hands scattered about the margins, denoting the hippiatric innovations introduced in the book, “medicines that are most certaine and approved; and heretofore never published.”

In addition to his literary pursuits, Markham also traded in horses, and is said to have introduced the Arabian to England. In this text, he calls Arabians the “most swift, and most beautiful” of horses (p. 225). In another work, he argued that the paces, athleticism valor, and purity of blood of the Arabian stallion set it apart from all other breeds. It was likely he who sold the Markham Arabian, the first recorded ancestor of the thoroughbred, to King James I in 1616, for the princely sum of £500.

Although Markham’s many works on horsemanship and other Arcadian themes were widely appreciated, they were not universally so. F. N. L. Poynter, Robert Gittings and other literary historians have made the case that Markham, “the self-appointed laureate” of the Earl of Essex’s coterie, was the rival whom Shakespeare referenced in his sonnets, and the model for the satirical character Don Armado in Love’s Labour’s Lost. Recent scholarship (Rosalind Barber in Notes & Queries, 2016) has explored the link between Markham and Christopher Marlowe.

Although Markham’s Maister-peece was reprinted a number of times, surviving copies are generally in poor condition. The plates in particular are often missing, not just the extraordinary centerfold but also the two smaller folding plates.  All are preserved here in generally excellent condition, with no signs of repair. The presence of the original binding makes this the finest copy available of this landmark work.