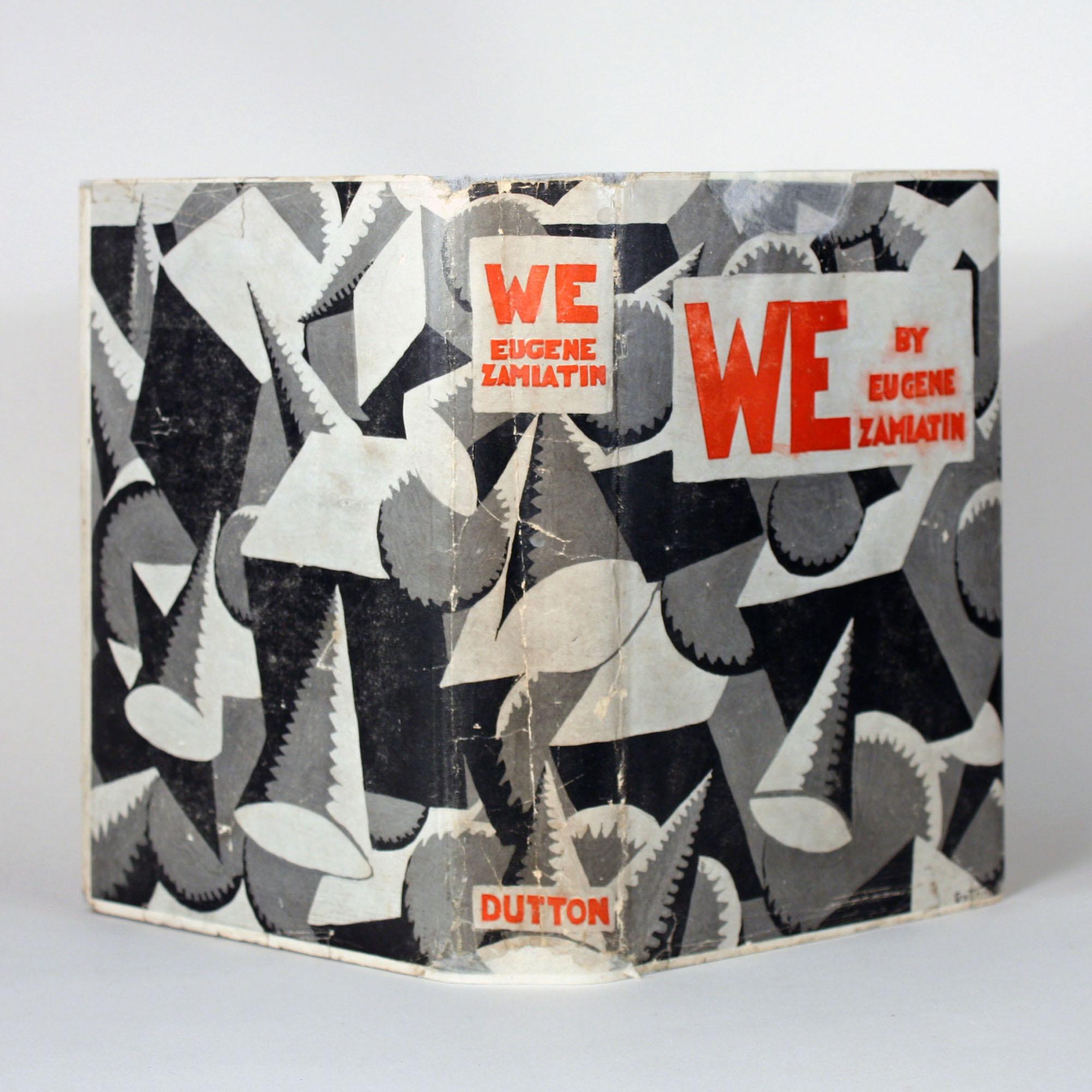 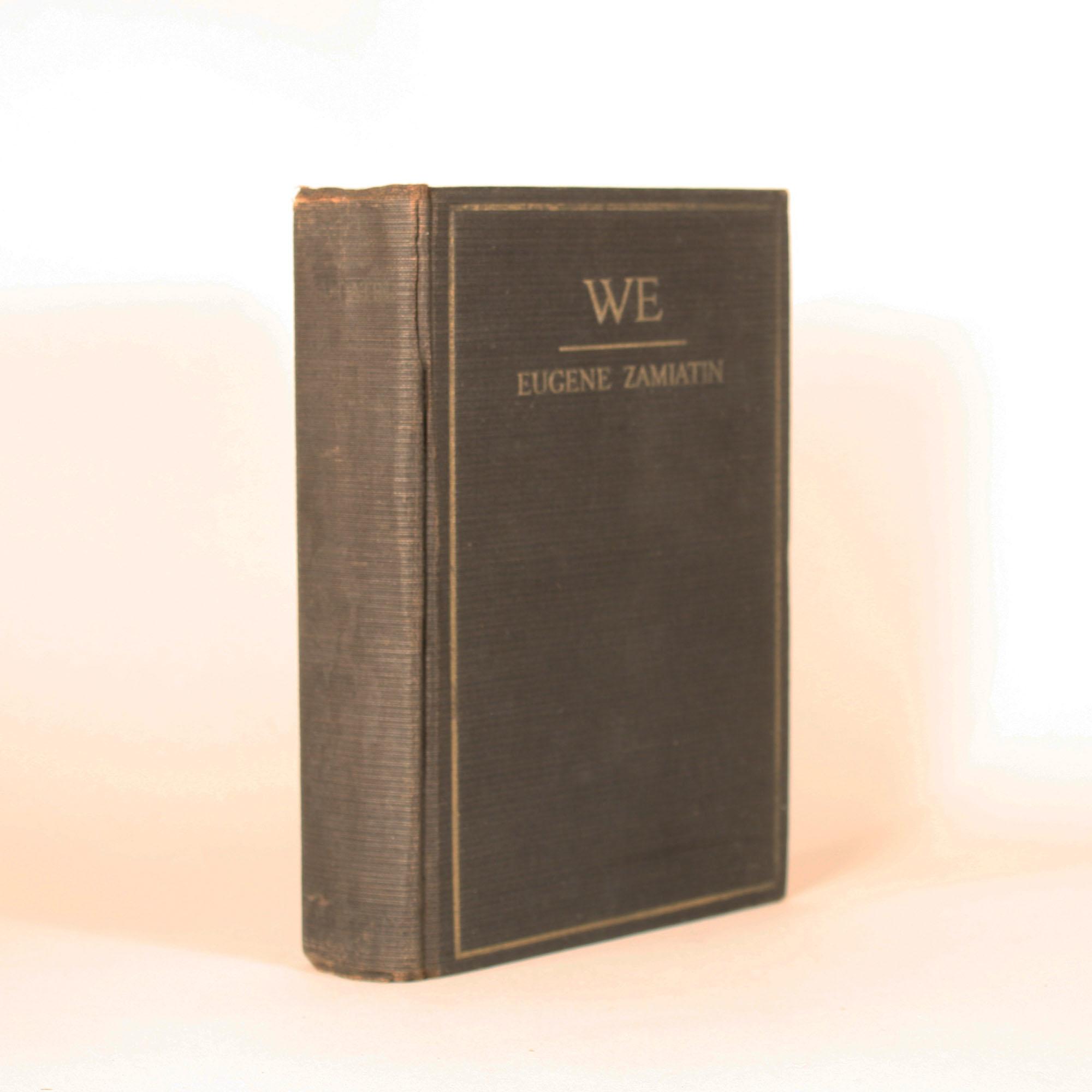 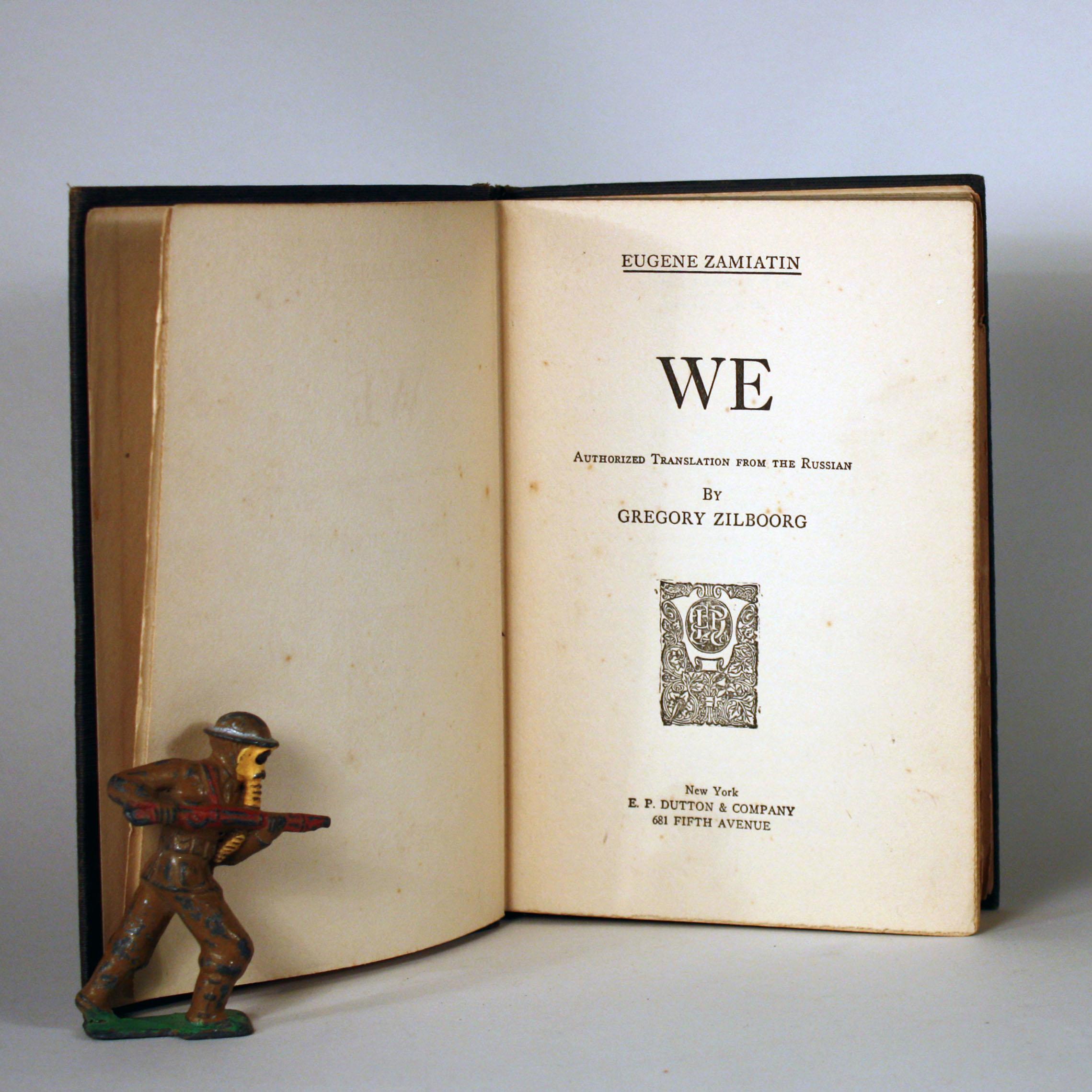 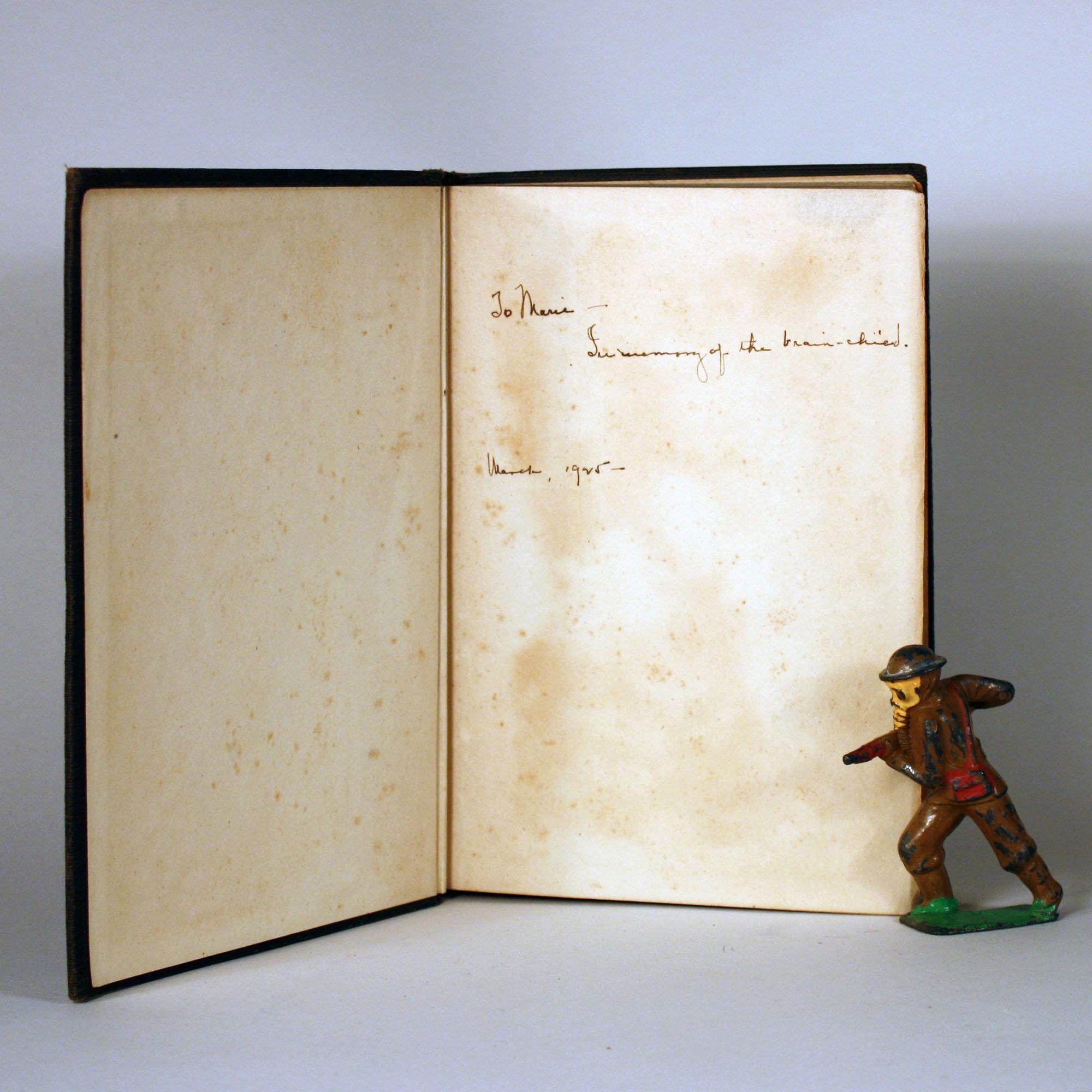 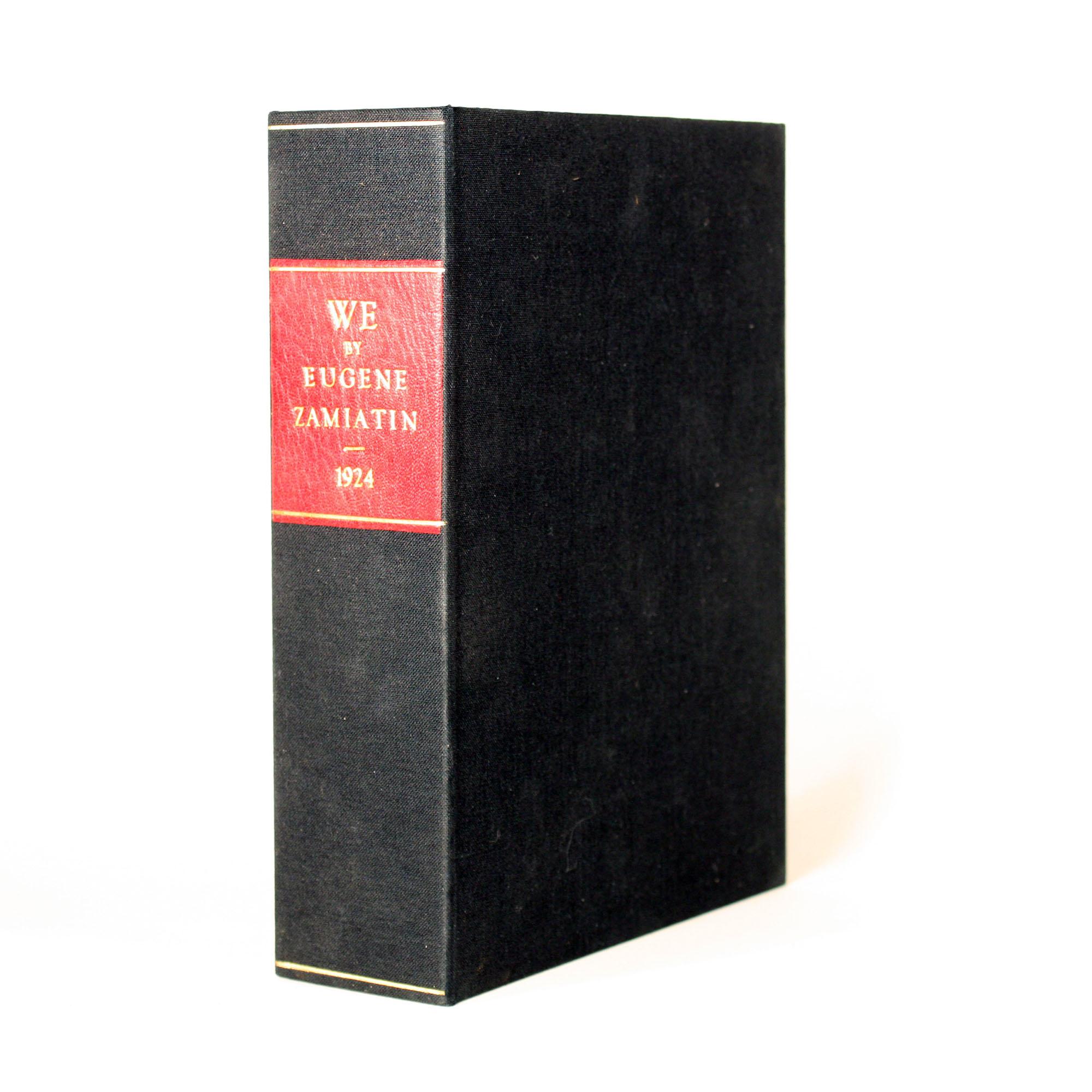 Zamiatin, Eugene [Yevgeny Ivanovich Zamyatin] (1884-1937). We. New York: Dutton, 1924. First edition. xiv, 286 p.; 20 cm. A very good copy in black cloth, in the dustwrapper, which has had two chips professionally restored, one at the top center front panel, the other at the heel of the spine. Housed in a handsome clamshell case.

The first edition in any language of this satirical classic of dystopian literature, which draws on expressionist aesthetic theory and Jungian psychology. Written in 1921, We has the distinction of being the first work to be banned by the Soviet censorship board. Although a tamizdat edition of the Russian text was published in New York in 1952, the text was not published in the Soviet Union until 1988.

As the critic Clarence Brown has noted, We is Zamiatin’s masterpiece: “It is the archetype of the modern dystopia, or anti-utopia; a great prose poem on the fate that might befall all of us if we surrender our individual selves to some collective dream of technology and fail in the vigilance that is the price of freedom.” The translations of We published outside of the Soviet Union earned Zamyatin the enmity of the Soviet leadership. With Maxim Gorky's support, Zamyatin successfully petitioned Stalin for permission to emigrate. In 1931, he moved to Paris, where he died in poverty. Although he published a few other works – including the libretto for Shostakovitch’s The Nose and the screenplay for Jean Renoir's Les Bas-Fonds – none approached the significance of We, which inspired the dystopian works of Aldous Huxley, George, Orwell, Ayn Rand, Kurt Vonnegut, and Ursula K. LeGuin.

Although he completed the book in 1920 or 1921, it was not until 1924 that We found its way into print. Recognizing the impossibility of having We published in Russia, Zamiatin smuggled the manuscript to the firm of E. P. Dutton, with the help of friends. Dutton arranged for a translation by Gregory Zilboorg (1890-1959), then a medical student at Columbia University who had already published an English version of a novel by Leonid Andreyev. Zilboorg’s translation is therefore the editio princeps, and it became the primary vehicle for introducing Zamiatin’s work to Western audiences. The early editions published in Czechoslovakia (1927) and  France (1929) were translated not from the Russian but the English. As Ilya Ehrenburg noted in a letter he wrote Zamiatin from Paris, “the English translation is indispensable (the publishers don’t know Russian and everyone here reads English).”

(Zilboorg himself later became a figure of note, writing several works on the history of psychology, and treating a number of celebrities, including George Gershwin and Lillian Hellman; the musical Lady in the Dark is reportedly based on Moss Hart's experience undergoing analysis with Zilboorg.)

A cryptic inscription, unsigned, adorns the flyleaf:  “To Marie – / In memory of the brain-child. / March 1925.”   The dustwrapper, executed in the "Cubo-Futuristic" style of Kazimir Malevich and Aleksandra Ekster, is impossibly rare, and does not appear to be represented in institutional or private collections. Leading specialists in genre fiction have told us that they have never seen another copy. An exceptional example of an influential classic of speculative literature.