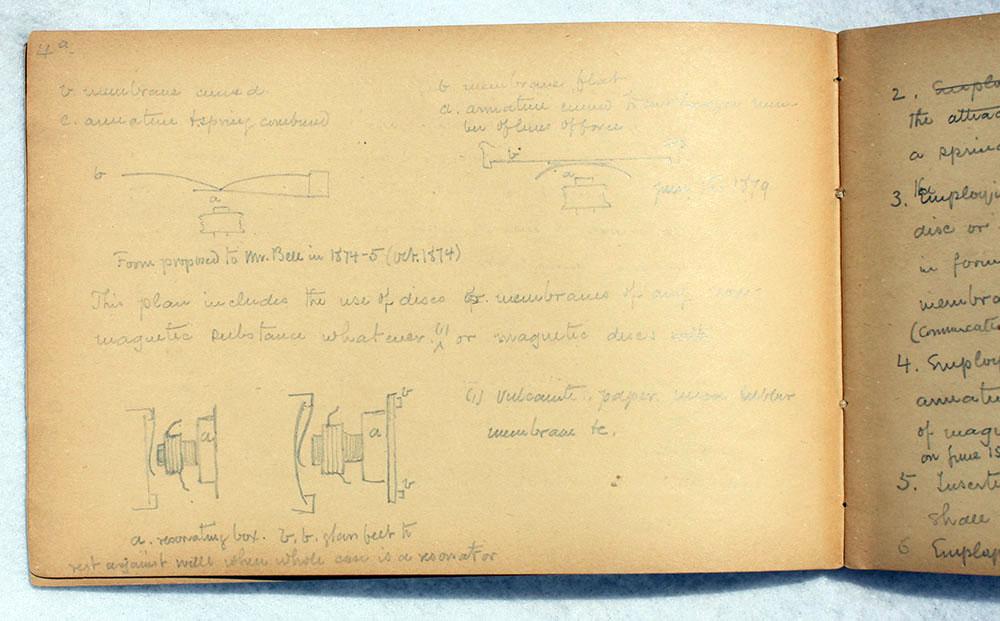 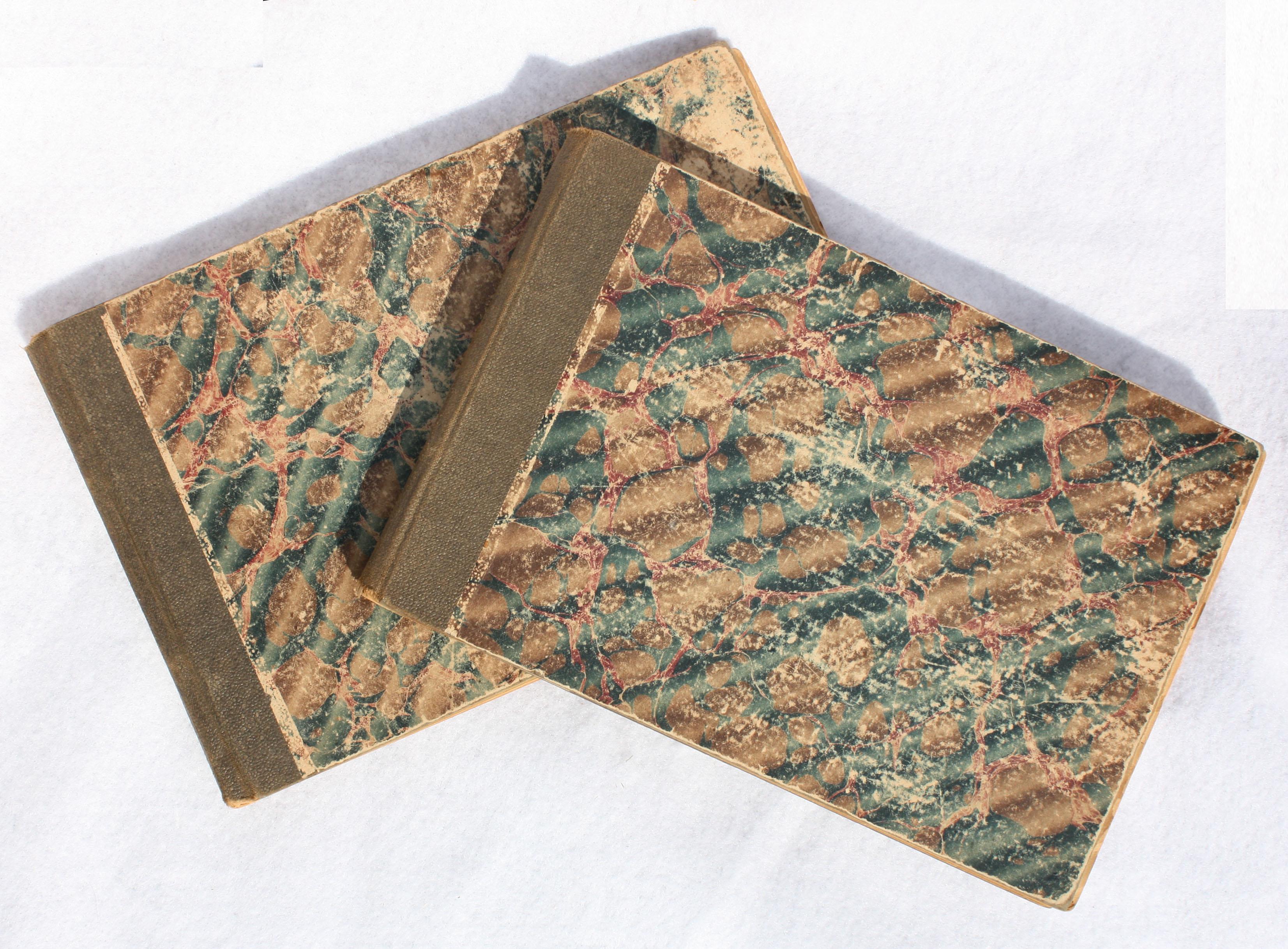 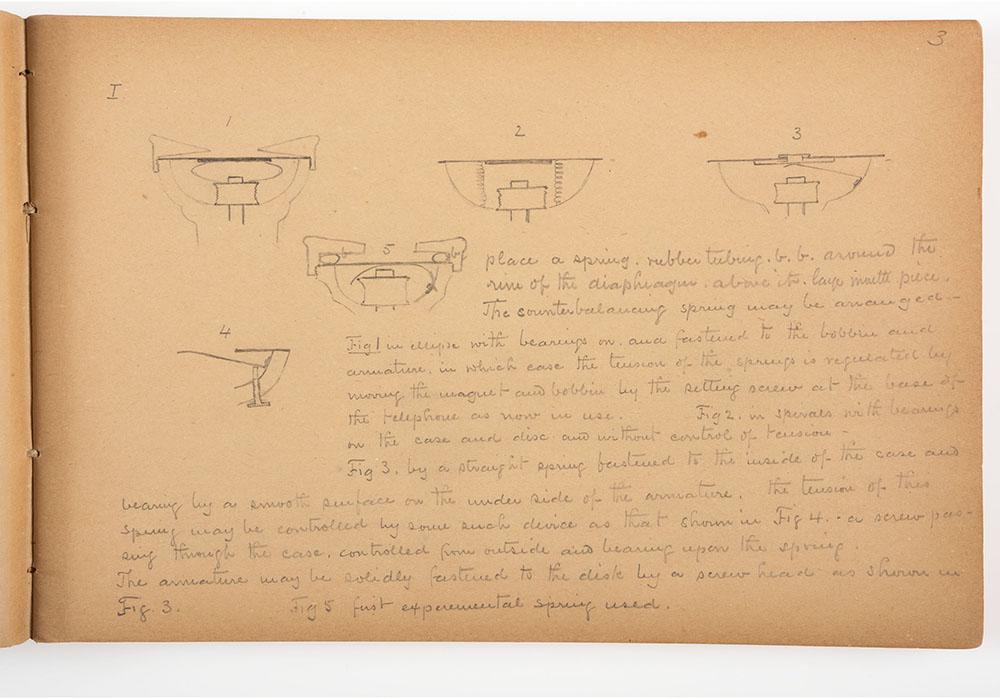 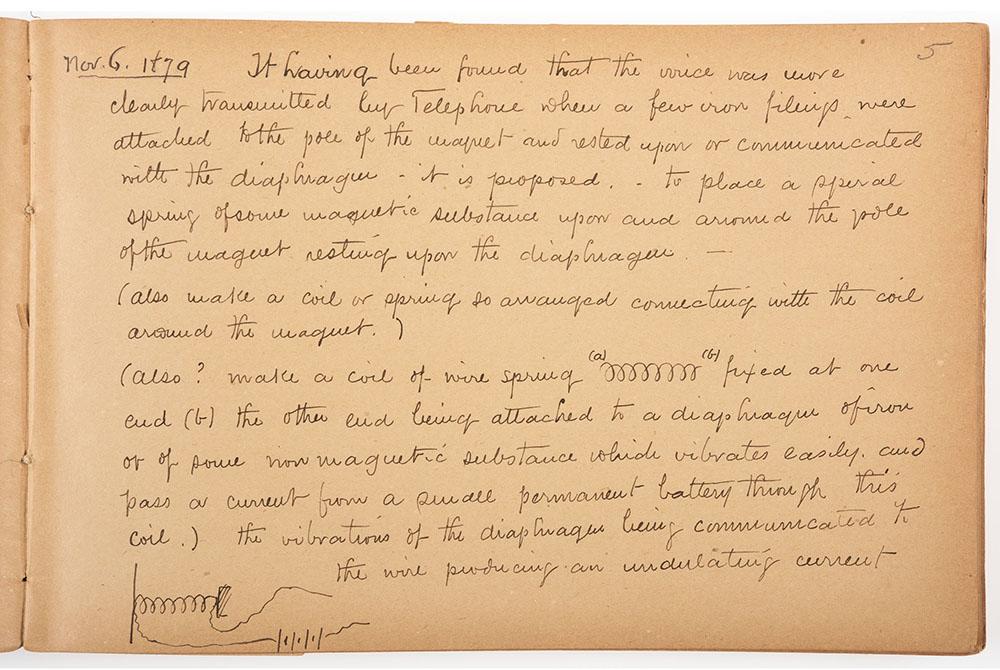 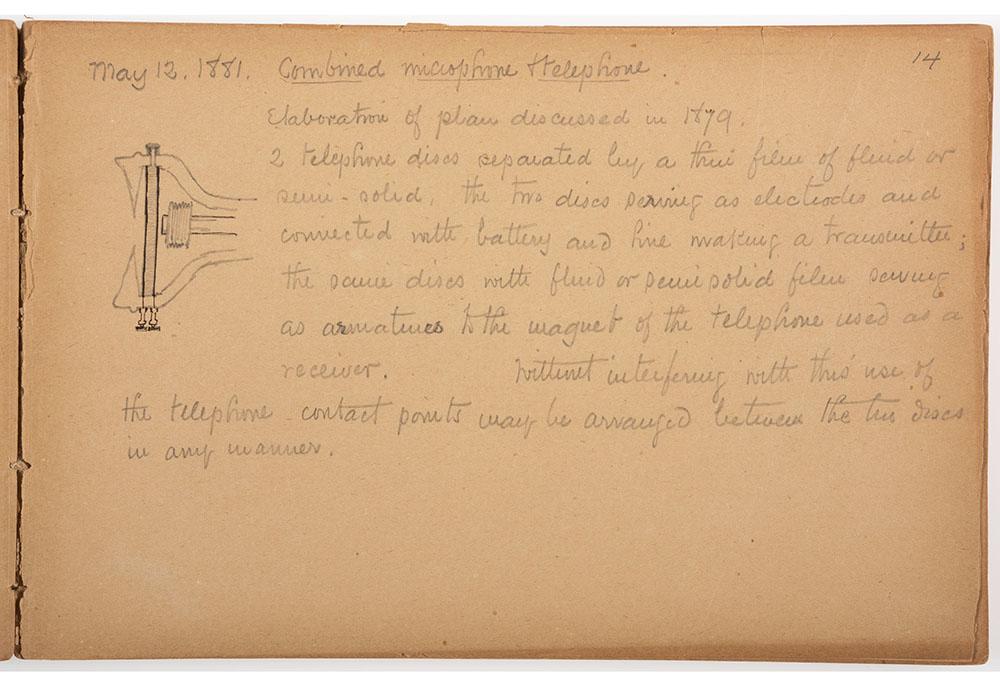 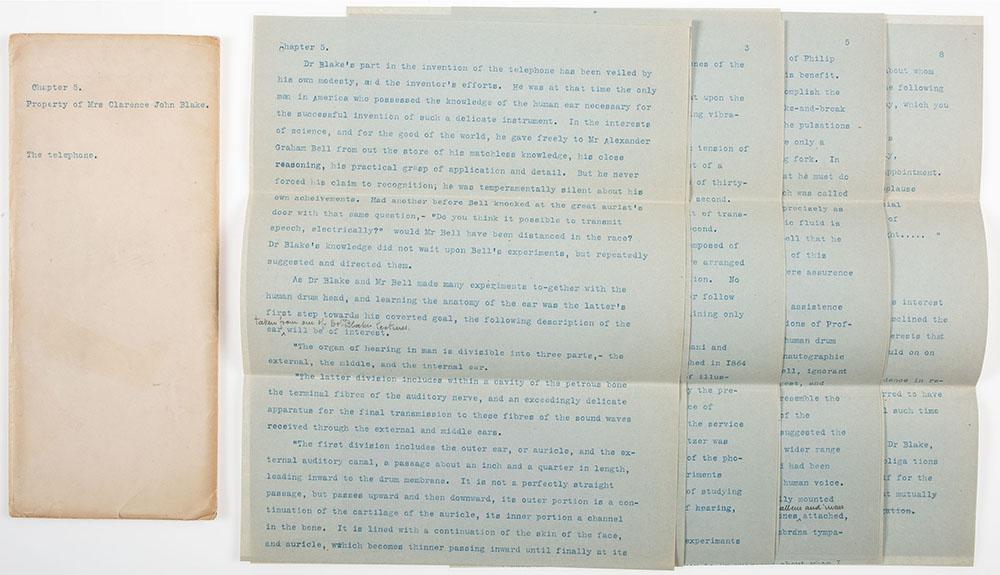 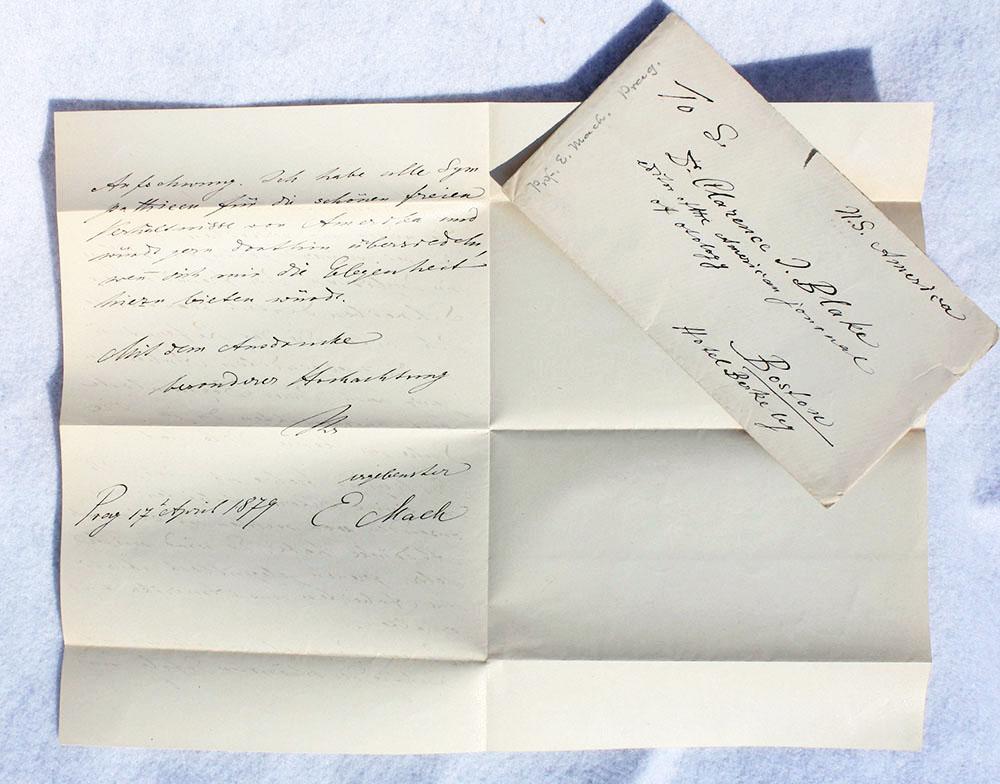 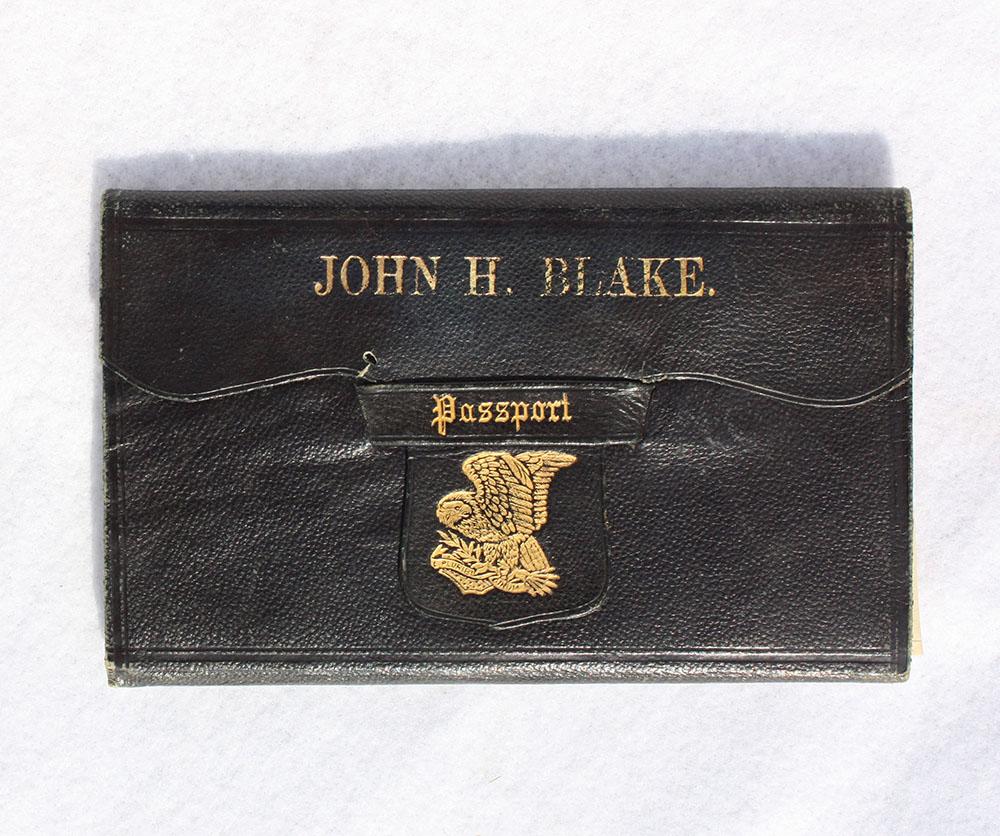 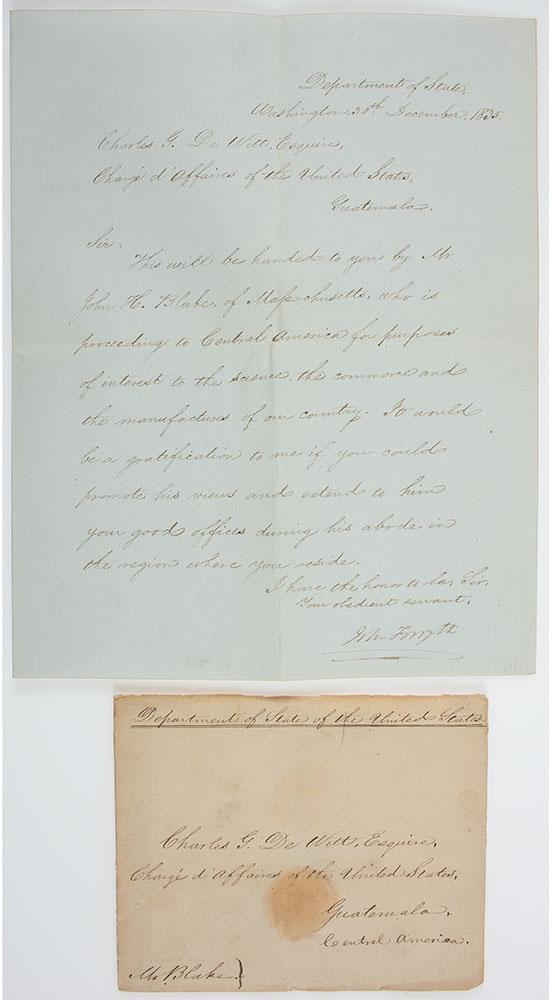 A small but dense collection of material on the renowned Harvard otologist who notably collaborated with Alexander Graham Bell in developing and perfecting the telephone. The two men met in 1874, and swiftly pooled their talents, the young doctor drawing upon his intimate knowledge of the anatomy of the ear – he had recently published a translation of an atlas of the osseous anatomy of the human ear by Nicolaus Rüdinger – to help Bell understand the minute functioning of the membrana tympani and the ossiculae. Together they embarked on a series of experiments that Blake later recalled as “one of the joyous scientific experiences of a lifetime.”

Blake secured two ears from human cadavers, one for himself and the other for Bell, and they worked in parallel in an effort to design a “phonautograph,” a mechanical device that would perfectly mimic the ear’s function. Each retreated to his lab, Bell in Brantford, ON, Blake in Cambridge. As Blake later recalled, “We agreed to go on independently with our investigations in the transmission of vibrations, a work I had taken up previously with Professor [Adam] Politzer in Vienna in 1869.” In December 1874, Bell moved to Boston to continue his research in a new lab Blake had arranged for him in a building owned by his father, John Harrison Blake. 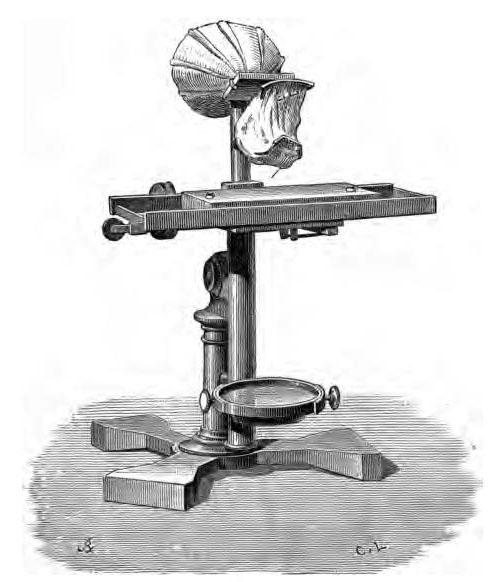 Blake and Bell's photautograph, incorporating a human ear. From Du Moncel, The telephone, the microphone and the phonograph (1879), p. 45.

“We compared notes vocally for nearly a year,” Blake recalled. “That comparison of notes was so close and the subject was so interesting that almost everyday we talked over some of the questions.” Their correspondence during this time is preserved at the Library of Congress. In February 1875, Blake and Bell presented the first fruits of their research with an article in the Boston Medical and Surgical Journal titled “The Use of the Membrana Tympani as a Phonautograph.” In June they appeared together at a meeting of the Massachusetts Medical Society.

The experiments were as exhilarating for Bell as they were for Blake. Notes one historian, “Up to this point [1875] Bell had told four men about his theory of a membrane diaphragm telephone. … Of the four, only Clarence Blake had appreciated the soundness of the idea, only Blake had been able to visualize it in working order.” At the end of June, Bell wrote to his parents from the lab Blake had secured for him that he had “an instrument modeled after the human ear, by means of which I hope tomorrow … to transmit vocal sound.” The next day, Bell and his assistant Thomas Augustus Watson made their first breakthrough. In March 1876, their improvements resulted in the first telephonic conversation: “Mr. Watson – come here – I want to see you.”

Bell frequently credited his friend, “a distinguished aurist in Boston, Dr. Clarence J. Blake,” with helping him gain the technical insight he needed to consummate his idea. In 1877 he recalled, “It occurred to me that if a membrane as thin as tissue paper could control the vibration of bones that were, compared to it, of immense size and weight, why should not a larger and thicker membrane be able to vibrate a piece of iron in front of an electro-magnet…?” Bell’s diaphragm magneto telephone of 1877, based on his research with Blake, was the first model of a membrane telephone. Bell would be indebted to Blake for more than moral support and scientific insight. During the struggle between Bell and Peter A. Dowd (representing Western Union) over patents in 1882-1883, Blake was called in as a witness to Bell’s experiments; he produced the rough sketches that Bell had drawn during their conversations in 1874 to support his friend’s claim to priority of conception. 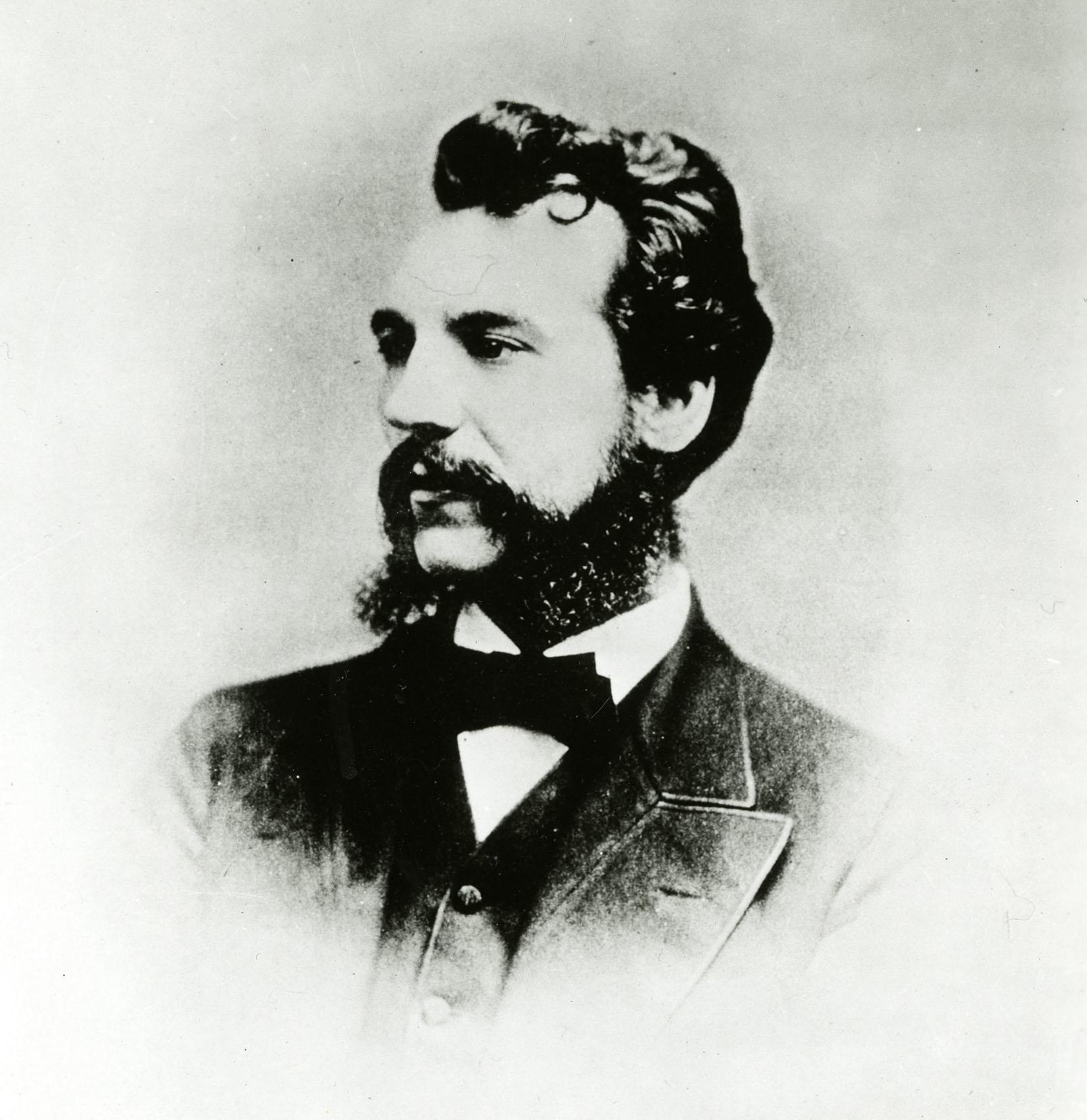 Two research notebooks from 1879-1881 are at the heart of the present archive, and they are of fundamental importance to understanding the early development of the telephone. They are concurrent with Blake’s work on The American Journal of Otology, the journal he founded in 1879, in whose pages he published the work of Bell, Thomas Alva Edison, and other inventors. They are also concurrent with the development of the Bell Telephone Company, which was founded in 1877 and reorganized in 1880.

Although the relationship between Blake and Bell has long been recognized, most historians have assumed that their scientific collaboration centered only on the human ear phonautograph of 1874-1875 and that they separated in 1880 after Blake declined to sell his services to the Bell Telephone Company. Charles Snyder writes that neither Bell nor Blake played a role in the development of telephone technology after 1880, and Bell’s biographer Robert V. Bruce claims that the further development of the telephone “superseded the Bell-Blake acoustical partnership.” But these notebooks demonstrate that Blake continued to work with Bell on problems in telephony until at least 1881, and that Blake was still tinkering as late as 1887.

Blake’s notebooks include hitherto unknown descriptions and sketches for improvements to the diaphragm magneto telephone, with notes on his communications with Bell. For example, his notes on how to “increase the susceptibility of the present Bell telephone” are followed by the remark “communicated to A. Graham Bell, Cambridge, June 15, 1879.” Some of the descriptions here are noted as being elaborations on experiments from 1874-75. There are plans for a “micro-telephone transmitter, a “logophone,” ”a “combined microphone and telephone,” a “telephonic or magneto writing apparatus.” Most intriguing are Blake’s notes for a speaking “phonograph” doll. These are dated March 10, [18]87 and are witnessed by Lowell C. Briggs. In 1887 Briggs, a resident of Boston, would enter into an agreement with Thomas Alva Edison to manufacture phonograph dolls under the name of the Edison Toy Phonograph Company. These notebooks reveal Blake to be the unheralded inventor.

The notebooks reveal also a more subtle facet of the close collaboration between Blake and Bell. They include drafts of papers on “the logographic value of consonant sounds.” This clearly issued from a central concern of Bell’s and of Bell’s father Alexander Melville Bell, whose life work focused on “Visible Speech,” a system the elder Bell developed to educate the deaf. Bell’s work on vowels, some of which Blake published, led directly to his research on telephonics. As Charles Snyder has noted, through Blake’s agency, Bell was able to bring together his work on electrical engineering with his work on the graphic representation of speech sounds. “It can said that it all began with an attempt to unlock the mystery of the vowel.” Blake’s notes on the logographic value of consonant sounds in these notebooks may thus be understood as part of Bell’s larger research project.

As an academic physician with no interest in the business world, Blake never registered any patents of his own, being content to communicate his research directly to Bell (who was also initially reluctant to accept profits from work he regarded as ancillary to his primary goal of helping the deaf). Further research will reveal the extent to which the ideas and sketches in these notebooks were incorporated into the designs of the Bell Telephone Company. What is clear, however, is that Blake was much more deeply involved with the early development of the telephone than the published record has revealed. 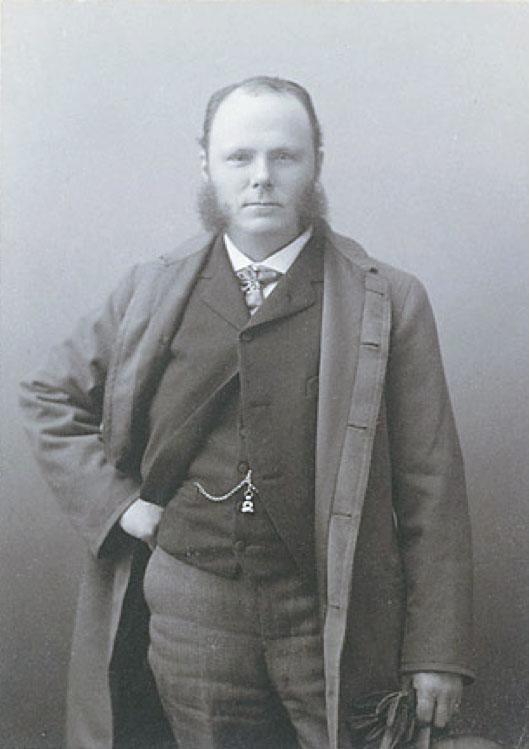 Although Blake is most widely celebrated today for his work with Bell, during his lifetime he was esteemed as a medical researcher. An 1865 graduate of Harvard Medical School, he moved to Vienna in 1866 first to study obstetrics, then to work as assistant to Adam Politzer (1835-1920), whom one historian has called “the greatest otologist of the 19th century and probably one of the greatest of all time.” Writing home from Vienna in a letter preserved at the Countway Library of Medicine, Blake confessed his hopes of “being one of those who shall build [otology] up to its proper rank as a branch of the Great Science.” Blake joined the faculty of Harvard Medical School in 1871, taking a position at the Massachusetts Eye and Ear Infirmary. A member of many learned societies, he served a term as president of the American Otological Society, and presided over the Ninth Otological International Congress in 1912. In 1888 he was named the first professor and chairman of the Harvard Medical School Department of Otology, and Chief of aural service at Mass Eye and Ear.

A prolific scholar, Blake’s prepared many textbooks, papers, and translations. In 1872, over a hundred years before modern endoscopes allowed angled views of the tympanic cavity, Blake designed a middle ear mirror. He helped to curtail widespread but ineffective practices in myringotomy, and introduced the idea of patching with paper damage to the tympanic membrane, a practice that would become standard until the development of mircrosurgical tympanoplasty in 1852. His treatment of complications arising from otitis media is recorded in these notebooks. In 1888 he pioneered stapedectomy as a procedure to address otosclerosis, and experimented with electricity as a treatment for tonal tinnitus. In 1891 he was instrumental in founding the Vincent Memorial Hospital where, as a manuscript included here put it, “women ministered to women.”

In addition to the notebooks, the present archive includes much from Blake’s medical career, including his diplomas from Harvard and the University of Vienna, and his medical registration from the State of Massachusetts. There is correspondence from leading European scientists, including three letters from Politzer and one from the great physicist Ernst Mach, whose varied research on perception included study of the ear. There are also extensive notes for an unpublished biography of Blake, written with his cooperation and with his annotations. The notes include Blake’s reminiscences and are supplemented with pages of copied letters, and quotations from speeches, conversations, and other lost sources. They will be crucial for anyone planning to do further study on Blake’s work. Finally, there are autobiographical manuscripts and other materials relating to Blake’s father, John Harrison Blake (1808-1899), a scientist and industrialist with a colorful and varied history.

The archive is organized into five series:

Provenance: Archives of the Howe Military Academy, Howe, Indiana. The Howe Academy was founded by Blake’s uncle, John Badlam Howe; Blake was buried in the Crypt of St. James Chapel on the Academy’s grounds. The school was dissolved in 2019.