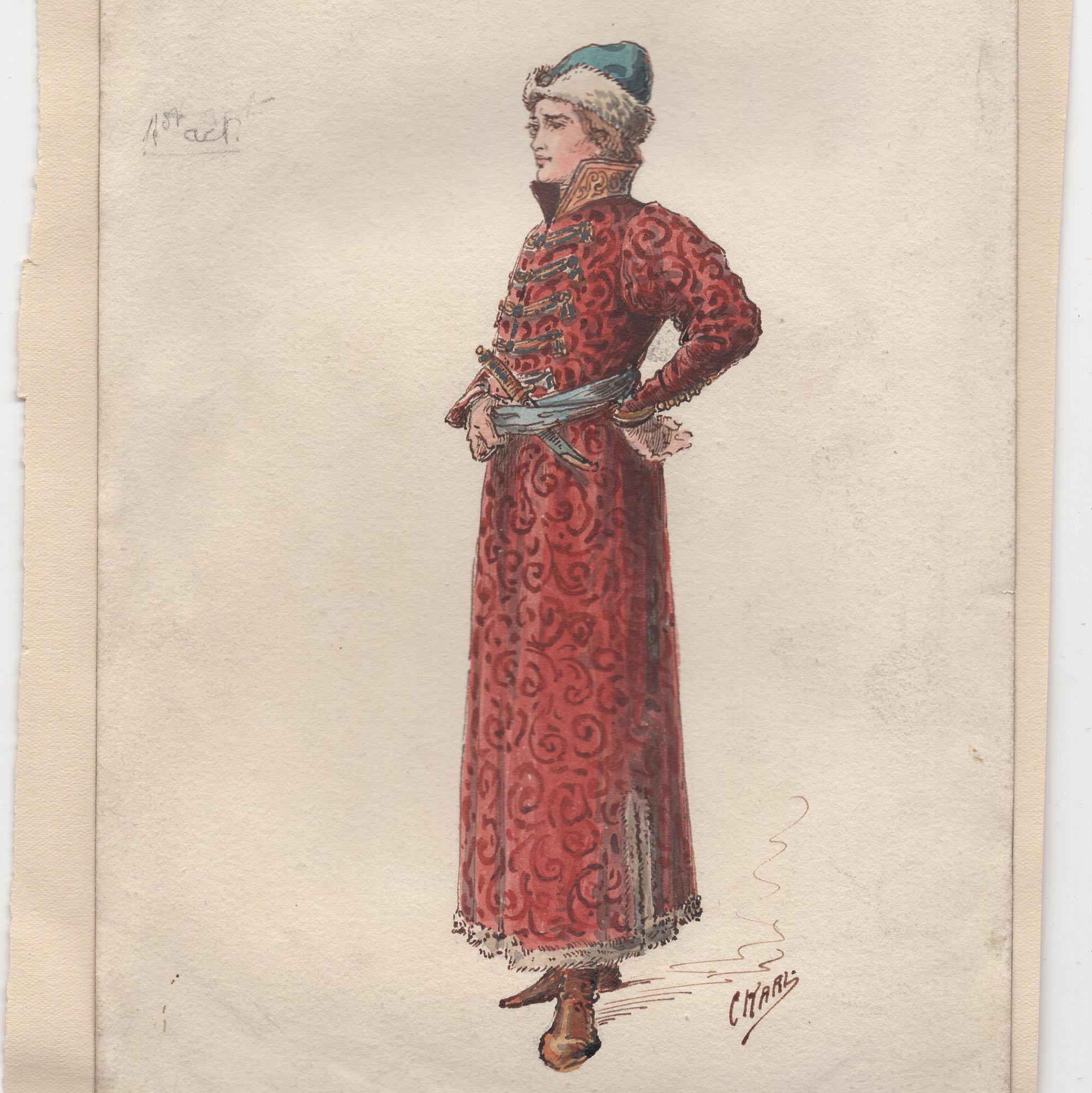 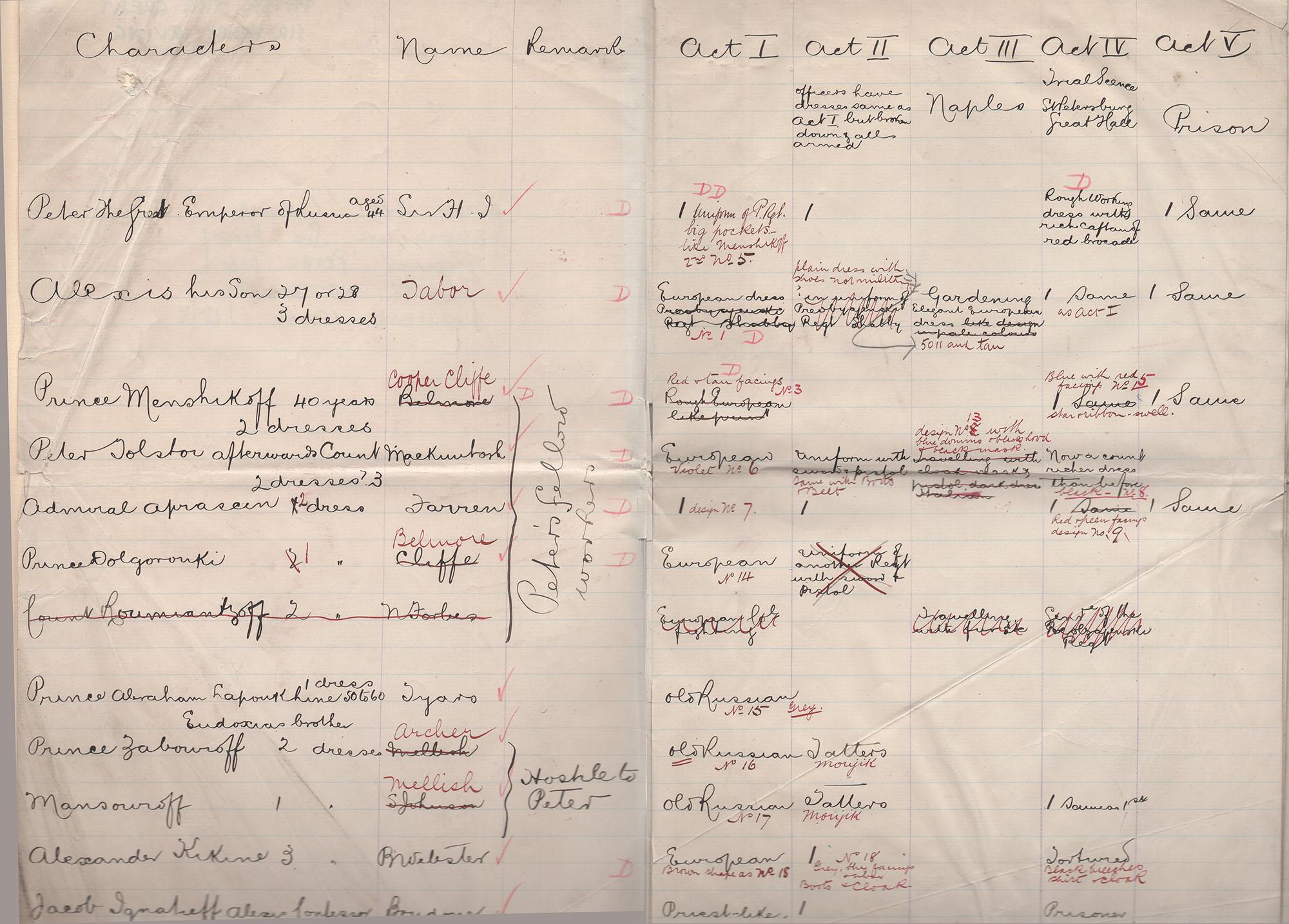 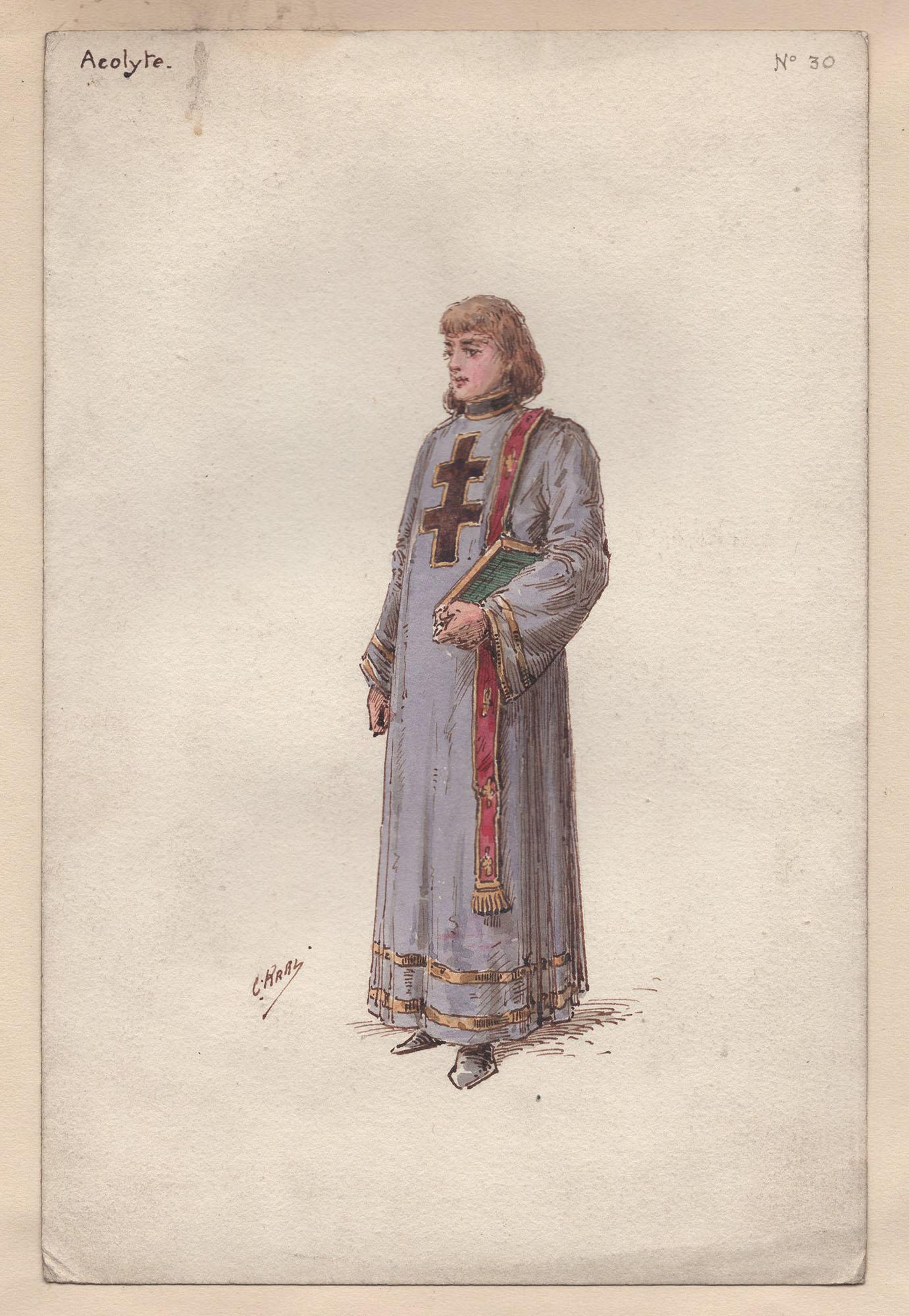 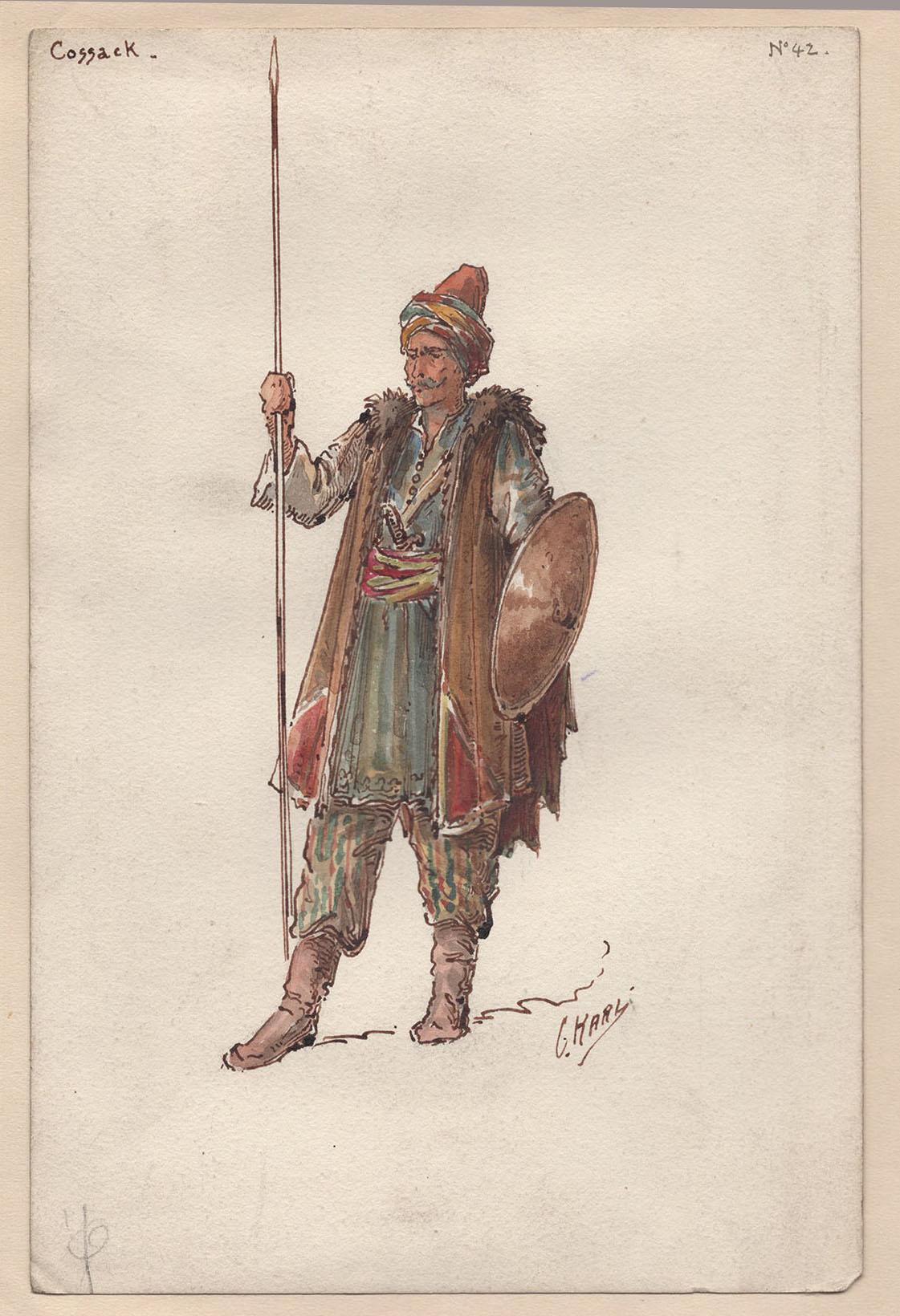 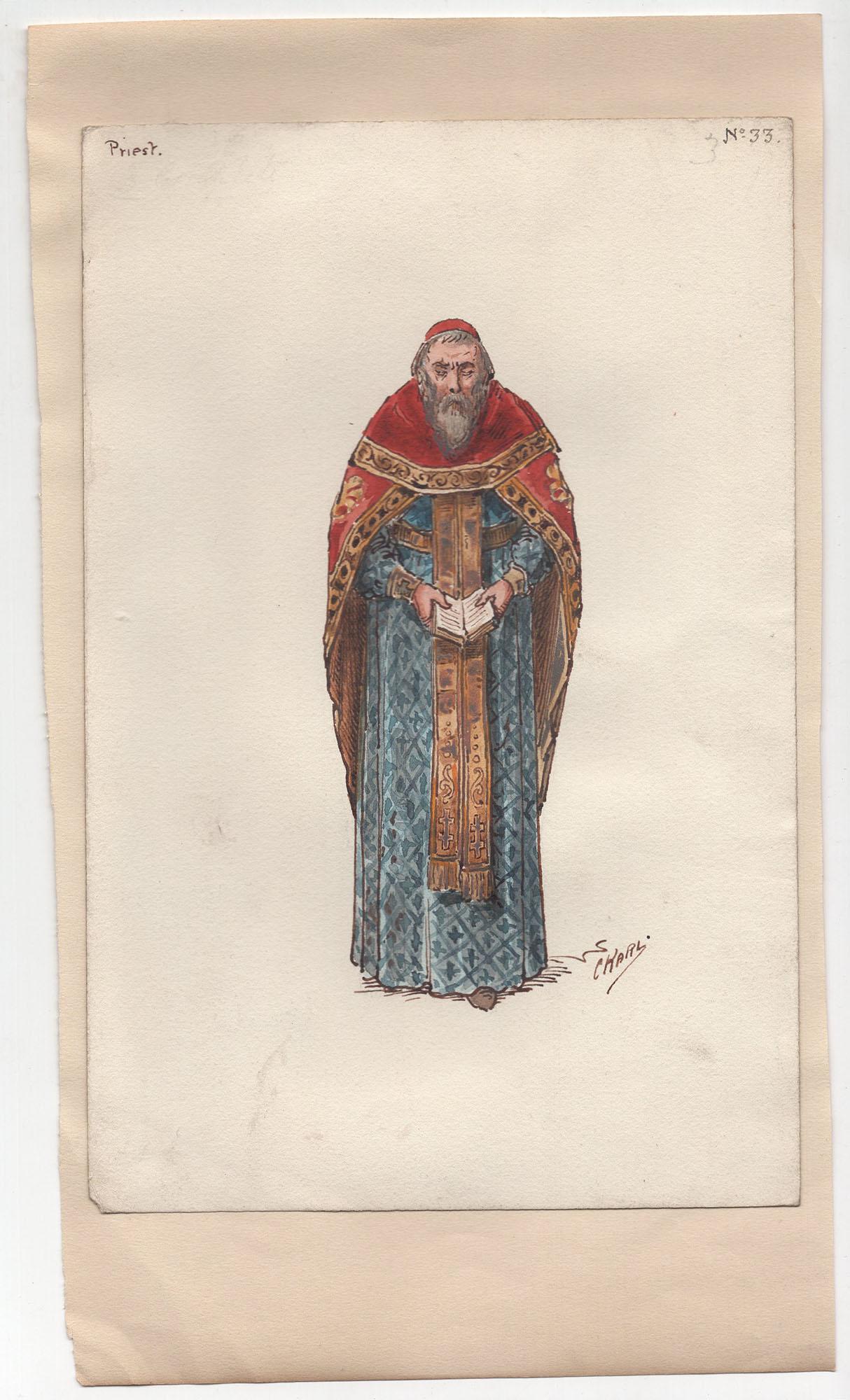 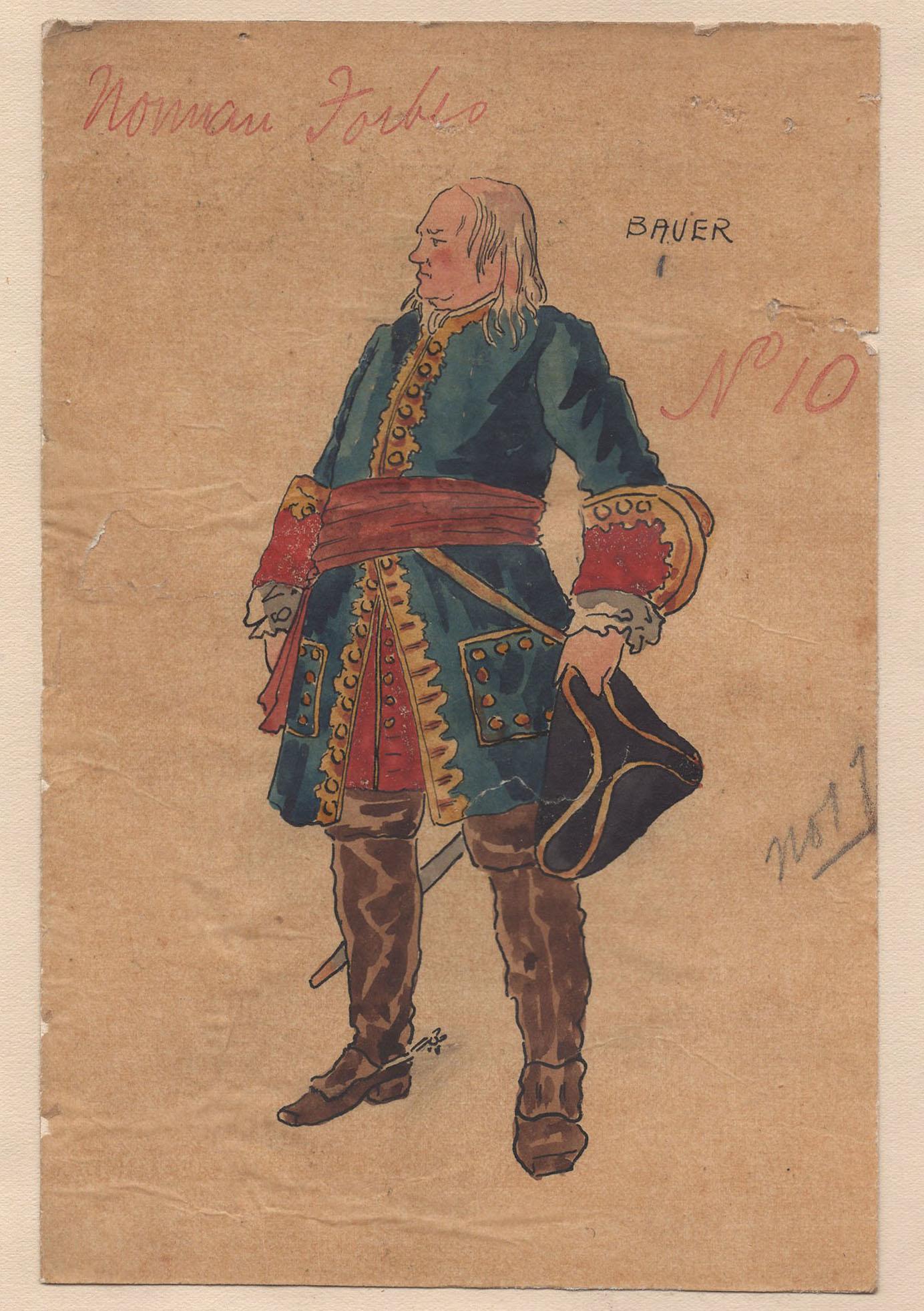 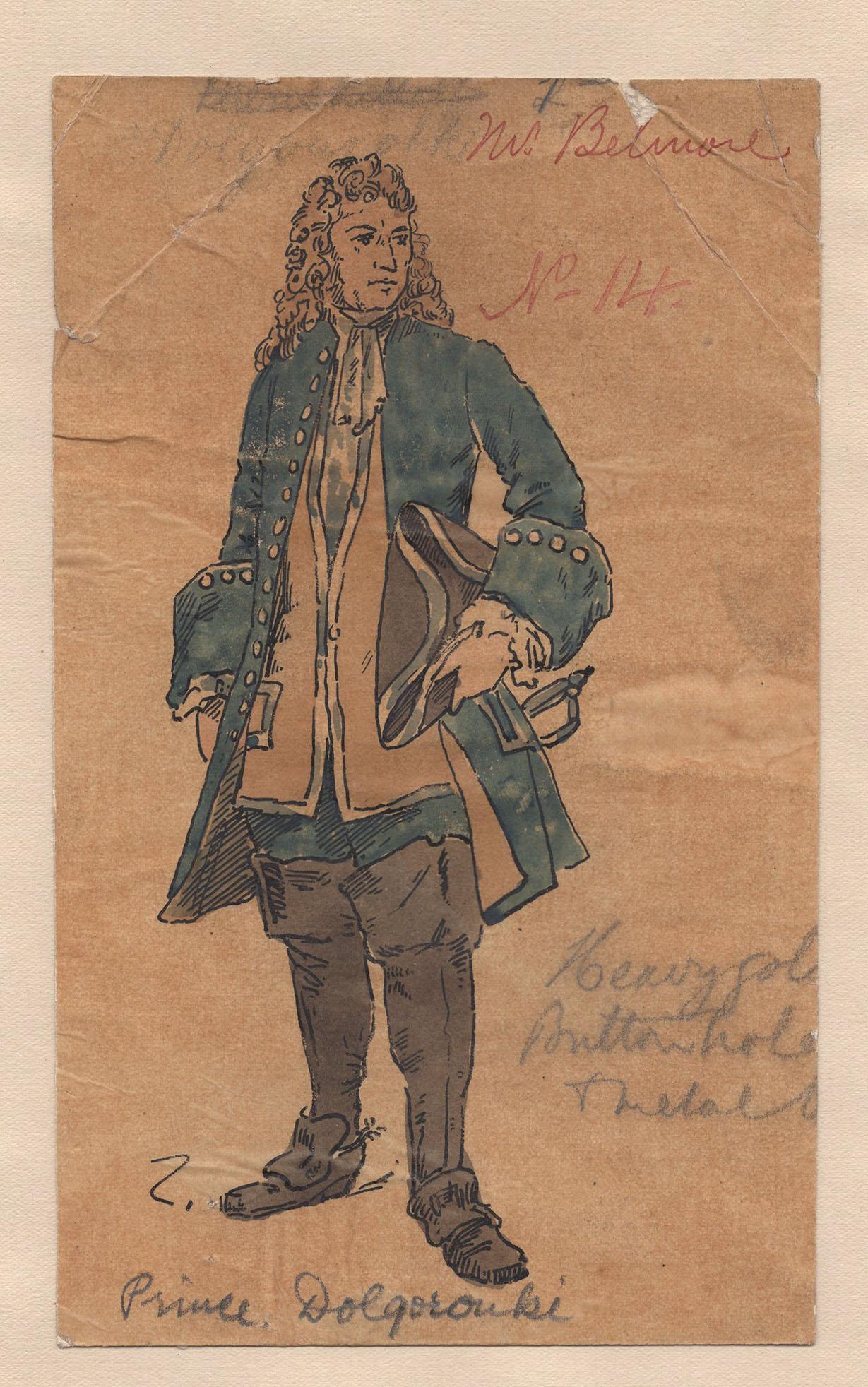 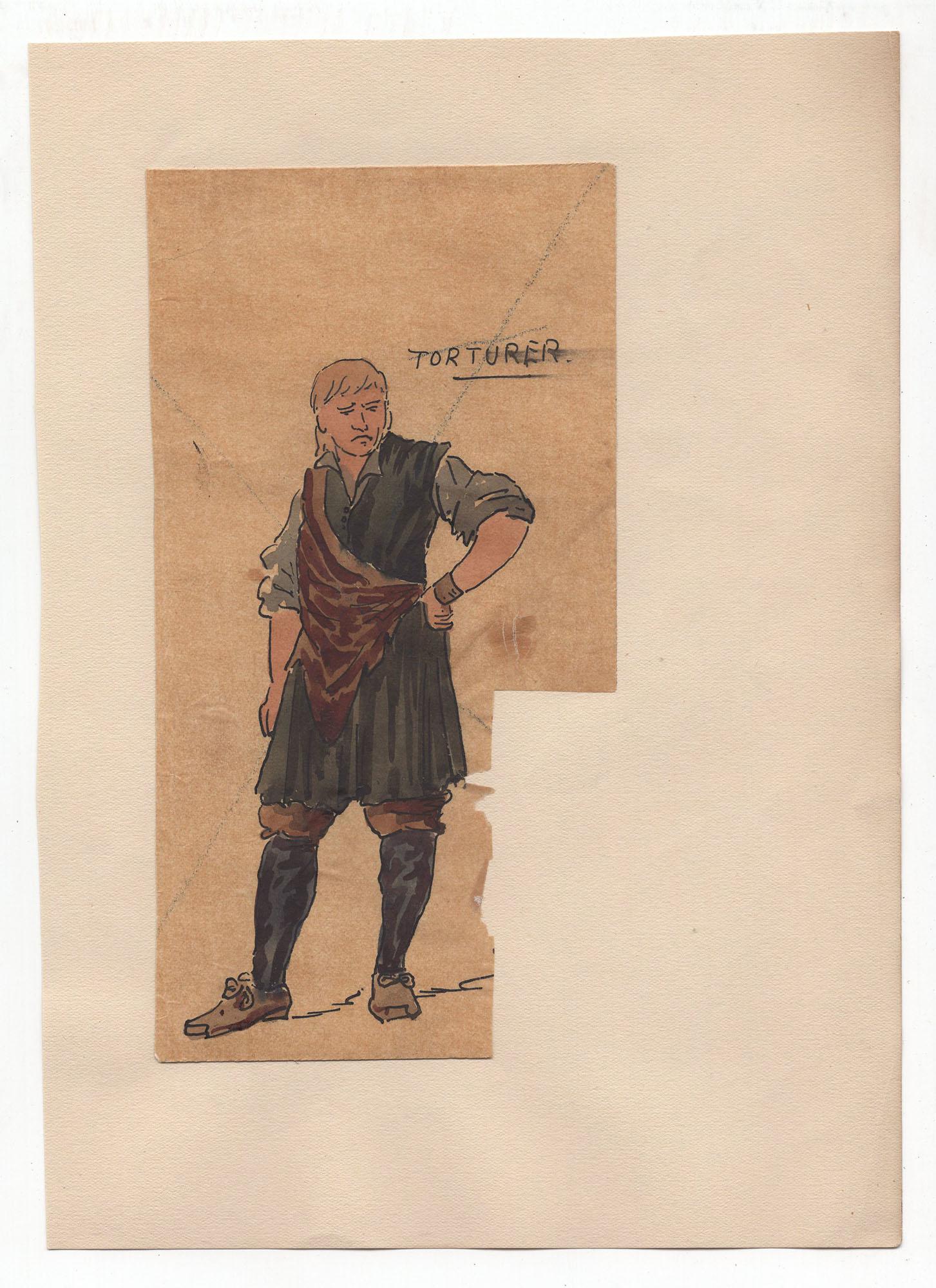 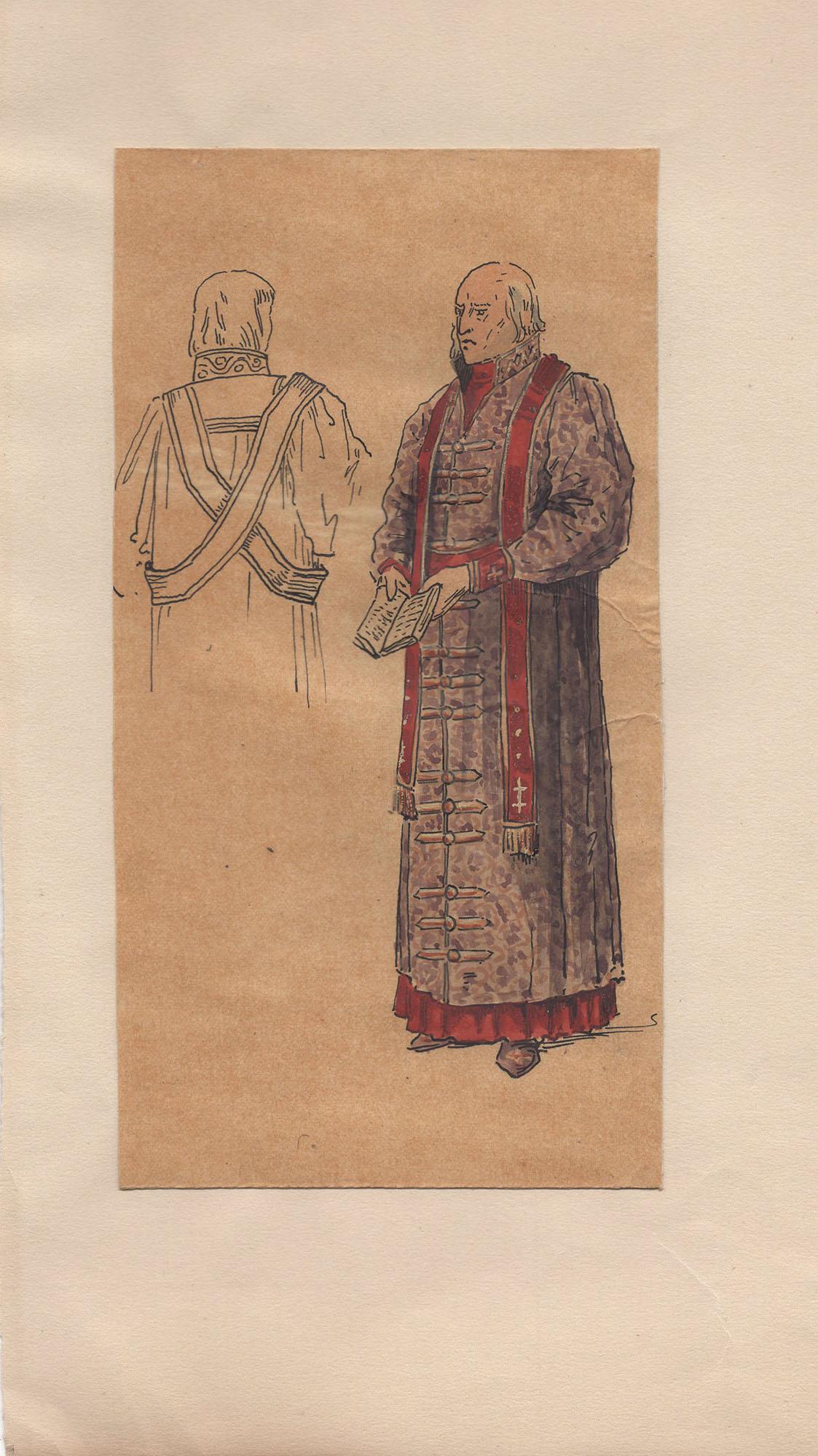 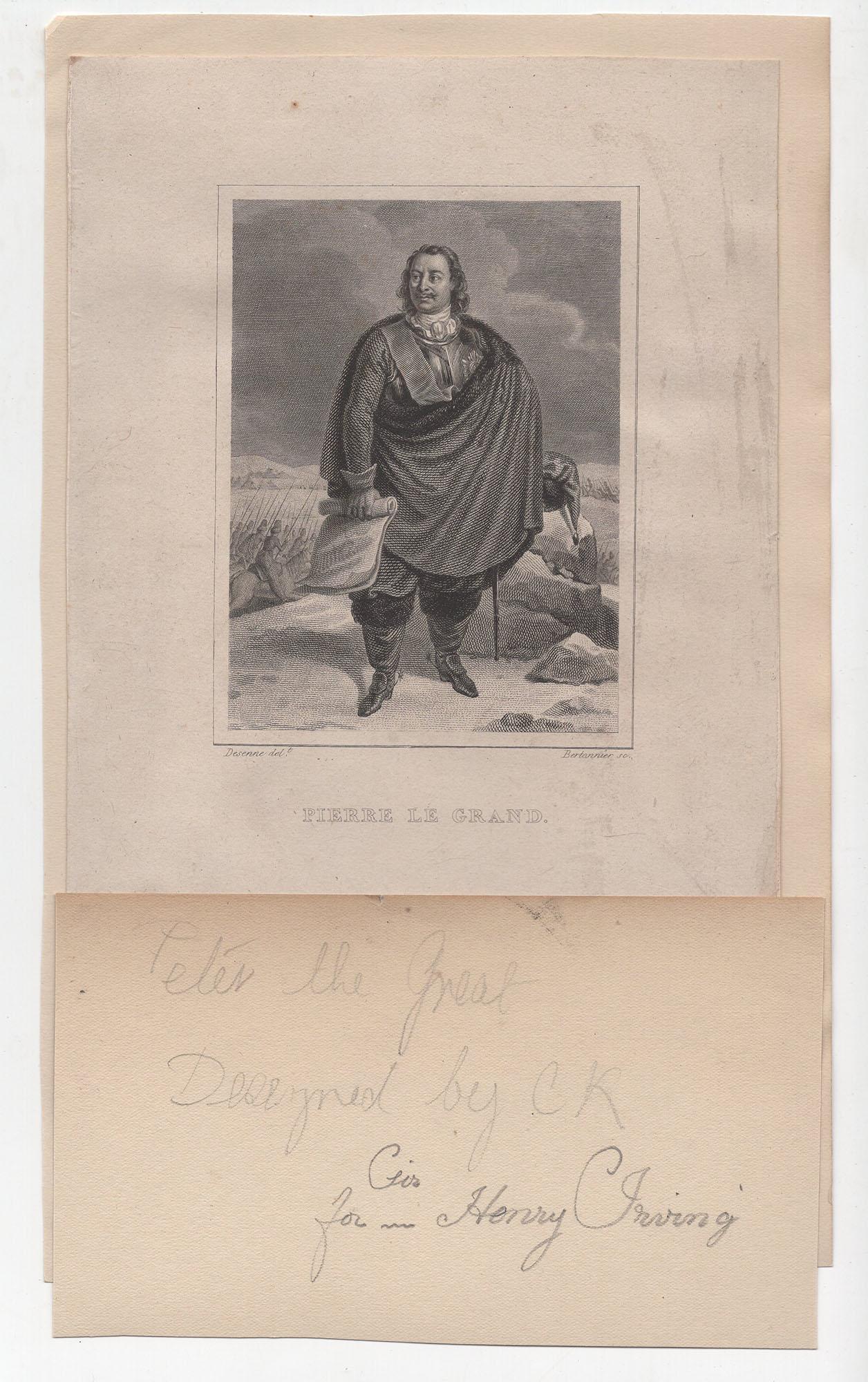 A rich archive of the costumes designed by the theatrical costumiers L. & H. Nathan for Sir Henry Irving's production of Peter the Great, written by the actor’s son Laurence Irving. Running at the Lyceum from 1 January to 14 February 1898, the players included Irving, Cooper Cliffe, William Mackintosh, Norman Forbes, Robert Taber, W. Lionel Belmore, Ellen Terry, and a very young Ethel Barrymore, appearing in one of her earliest roles. Included in the archive are:

Bleak and grisly -- the play centers on "a father hounding his son to death," as Bram Stoker put it, and featured scenes of torture that made tender-hearted patrons leave their seats -- Peter the Great was not a commercial success. But the critics found many good things to say about the production, and the society columns found fodder for gossip – the cast included an unusual proportion of American actors, one of whom (Ethel Barrymore) was briefly engaged to the author. While the script received mixed reviews, the splendor and historical fidelity of the costumes were widely praised. “Struck, like everybody else, by the research of ‘Karl,’ who had designed the dresses used in ‘Peter the Great,’” wrote a correspondent for The Sketch, “I sought out the artist to learn how he does it.”

One of the most prolific costumers of the time, “designing Karl” joined the firm of L. & H. Nathan in 1885, after having prepared drawings for The Ballad-Monger – the play in which Herbert Beerbohm Tree debuted what would become one of his signature roles. Admired for his swift work, historical accuracy, and vivid aesthetic, Karl was the preferred source for Tree, Irving, and such other leading producers as Fred Terry, Frank Curzon, and George Alexander. “Indeed,” remarked the Sketch in 1898, "there has scarcely been an important production during the past ten years in which Karl has not had at least a hand.” Karl was known also for working closely with other artists, including Edward Burne-Jones and Lawrence Alma-Tadema. One of his collaborators on Peter the Great was Alice Comyns Carr, renowned for the beetle-wing dress she designed for Ellen Terry’s 1888 performance as Lady Macbeth.

As Karl explained in the Sketch, his work for Peter the Great was “one of my biggest undertakings, necessitating the drawing of over forty distinct sketches for the prominent characters alone.” Noting that he had designed the costumes for “quite a number of Russian plays,” he described his work in detail:

In “Peter” the costumes are all actually correct both as to date and design. … First are the European costumes. For, you know, Peter imported all sorts of Western notions into Russia on his return from England. For this reason I have clothed the Emperor, Alexis, Tolstoi, and Aproxin, with several others, in Europeanised attire. Then there are the independent nobles and their following, Lapoukine, for example, who wear the old Boyar costume of Central Russia. The third class comprises the Cossack element, so that the work of designing this play was unusually interesting.

Bram Stoker may also have been referencing Karl's work when he recalled that "Great pains were spent in the archaeology of the play, so that when it was produced it was in its way a historical lesson."

Although Karl and Stoker highlighted their accuracy, John Nathan, who ran the costumier that his grandfather had founded in 1790, observed that that his top designer was motivated equally by aesthetics. In an 1898 interview with The World of Dress, Nathan remarked that Karl was:

more inclined to temper historical exactitude with pictorial fancy than I should be. My own feeling is for the real thing as it was actually worn, rather than the beautiful thing as it ought to have been worn. But this is an idiosyncrasy, and Mr. Karl is right.

Karl executed the work for Peter the Great quickly. He received the manuscript in September 1897, and the play was scheduled to open on January 1st. As the Sketch noted, he submitted his finished designs to Sir Henry Irving in “rather under two months.” The speed with which Karl worked is remarkable especially given the extraordinary detail of the designs, which reveal intricately patterned brocades, elaborately braided trim, rich fur, and the accoutrements of office, whether spear and shield or epitrachilion and bible.

The archive presented here collects over 30 watercolors, executed on heavy stock and mounted on paper, as was the custom at L. & H. Nathan. Included are costume designs for many of the principal characters (though not the title role, nor any of the women, which were presumably executed by Comyns Carr), as well as many of the supporting cast – Boyars and Cossacks, priests and acolytes, retainers and torturers. Each drawing specifies the character’s name, and most are numbered. Some have manuscript annotations, which identify the actor or offer instructions (i.e. “Tatters for 2nd Act”). Twenty-one pieces bear Karl’s signature. The other ten are unsigned, and appear to be in another hand. We do not know who executed the ten unsigned designs, but stylistically they resemble the designs for Coriolanus ascribed to Alma-Tadema at the V&A, which are similarly annotated. We note also that Karl and Alma-Tadema had worked together on Hypatia, and that their collaboration on the costumes for Tree’s production of Julius Caesar immediately followed Karl’s work on Peter the Great -- in his interview with the Sketch on his designs for Peter the Great, Karl references Julius Caesar as his current project.

Accompanying the designs is a handmade booklet of eight pages, 8” x 13”, prepared by Karl and his associates for planning the costume changes for the production. The name of each character and the actor is given, along with notes regarding their clothing in each act.  Written in black and red inks, this is clearly a working document evincing a number of revisions, and references the illustrations. It offers a fascinating behind-the-scenes look at the processes of the production.

A substantial and revealing archive, representing a widely praised collaboration between one of the most important costume designers of the London stage and one of the greatest actor-producers of the Victorian period, each working at the height of his powers.