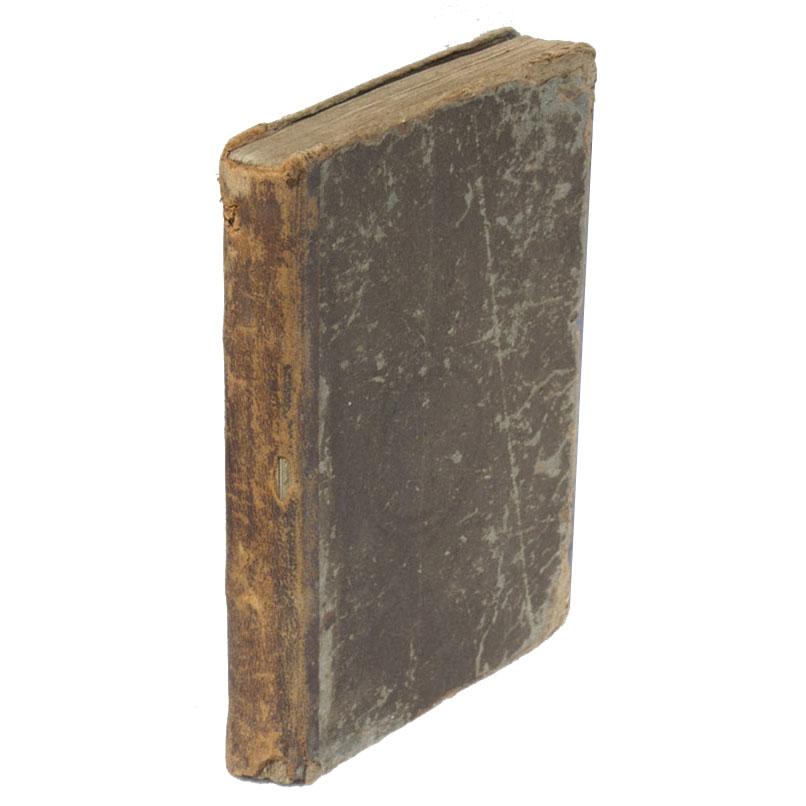 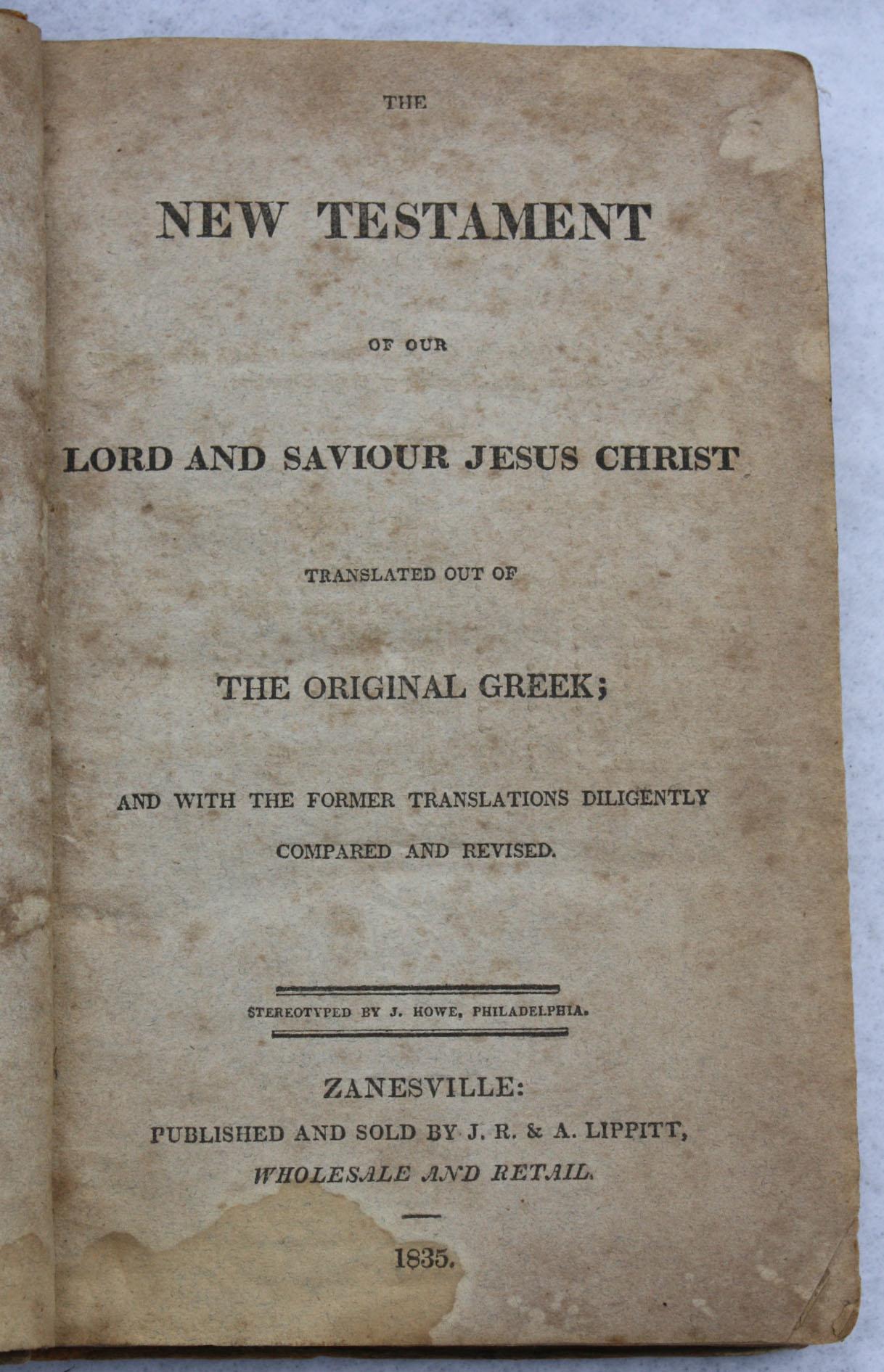 Bible. New Testament. The New Testament of Our Lord and Saviour Jesus Christ Translated Out of the Original Greek, and with the Former Translations Diligently Compared and Revised. Zanesville: Published and Sold by J. R. & A. Lippitt, 1835. 270 p.; 17 cm. First thus. Printed in double columns on cheap paper, with narrow margins. Stereotyped by J. Howe, Philadelphia. Very good in original boards backed with leather, all rather worn.

An early Ohio imprint, and one of the first bibles to be published in the state. According to the Morgan Bibliography of Ohio Imprints, the first Buckeye bible was published in Cincinnati in 1823.  Zanesville was a thriving community – one-tenth the size of Cincinnati, it boasted a population in 1840 of 4,768 souls. William Davis, a wholesaler and retailer of Zanesville, published a New Testament in 1828 (Morgan 8566), but his best-seller was Lindley Murray’s Introduction to the English Reader, which went through four printings between 1826 and 1828. The plates for both titles were purchased from the stereotyping shop of Jedediah Howe in Philadelphia. Around 1830, Davis decamped for Lower Sandusky, where he would publish the Sandusky County Democrat.  Before he left Zanesville, he sold the plates for the New Testament and Murray’s English Reader – and probably his press -- to J. R. and Arnold Lippitt.

The Lippitt brothers maintained a store on Main Street in Zanesville stocked with books, stationery, drugs, medicines, and dye stuffs. By 1843, they had gone their separate ways – J. R. (1803-) went to the rural hamlet of Norwich, 14 miles and a world away -- and Arnold’s general store was now a bookstore (see Morgan 9493). Morgan lists 14 publications by the Lippitts, including three printings of the New Testament (1835, 1836, and 1841), and five printings of Murray’s English Reader. An entrepreneur in the pioneer model, Arnold Lippitt (1802-1887), also served as a general contractor – he appears in the legislative annals of Ohio in the context of a lengthy investigation over the construction of a dam and lock on the Muskingham River between Zanesville and Dresden in June 1834. Perhaps it was the failure of that enterprise that led him to publishing. While operating his store and his press, Lippitt also dabbled in the glassworks industry, and in the mid-1840s he abandoned retail to take over operations at a bottle factory. 1867, Lippitt moved from Zanesville to Jackson, Tennessee and opened a custom mill for making breadstuffs and feed.

Ownership signature to rear flyleaf, “Mary Galbraiths / Book / Price 25 Cts / A.D. 1841” A faint pencil inscription to the front free endpaper bears the name of Archibald Galbraith. A page of what we presume to be his notes is laid in. A resident of Salt Creek, Ohio (67 miles from Zanesville), Archibald Galbraith (1806-1872) appears in the annals as one of the founders in 1840 of the Duncans Falls Baptist church -- though it is possible that this was his father (d. 1843), who bore the same name. Mary (1781-1867) was Archibald’s mother, born in Ireland. American Imprints 30466; Hills, English Bible in America 919; Morgan 2732 (noting four copies, all in Ohio collections).

A fascinating example of an early American bible with a rich provenance and rustic binding, redolent of life on the Ohio frontier.