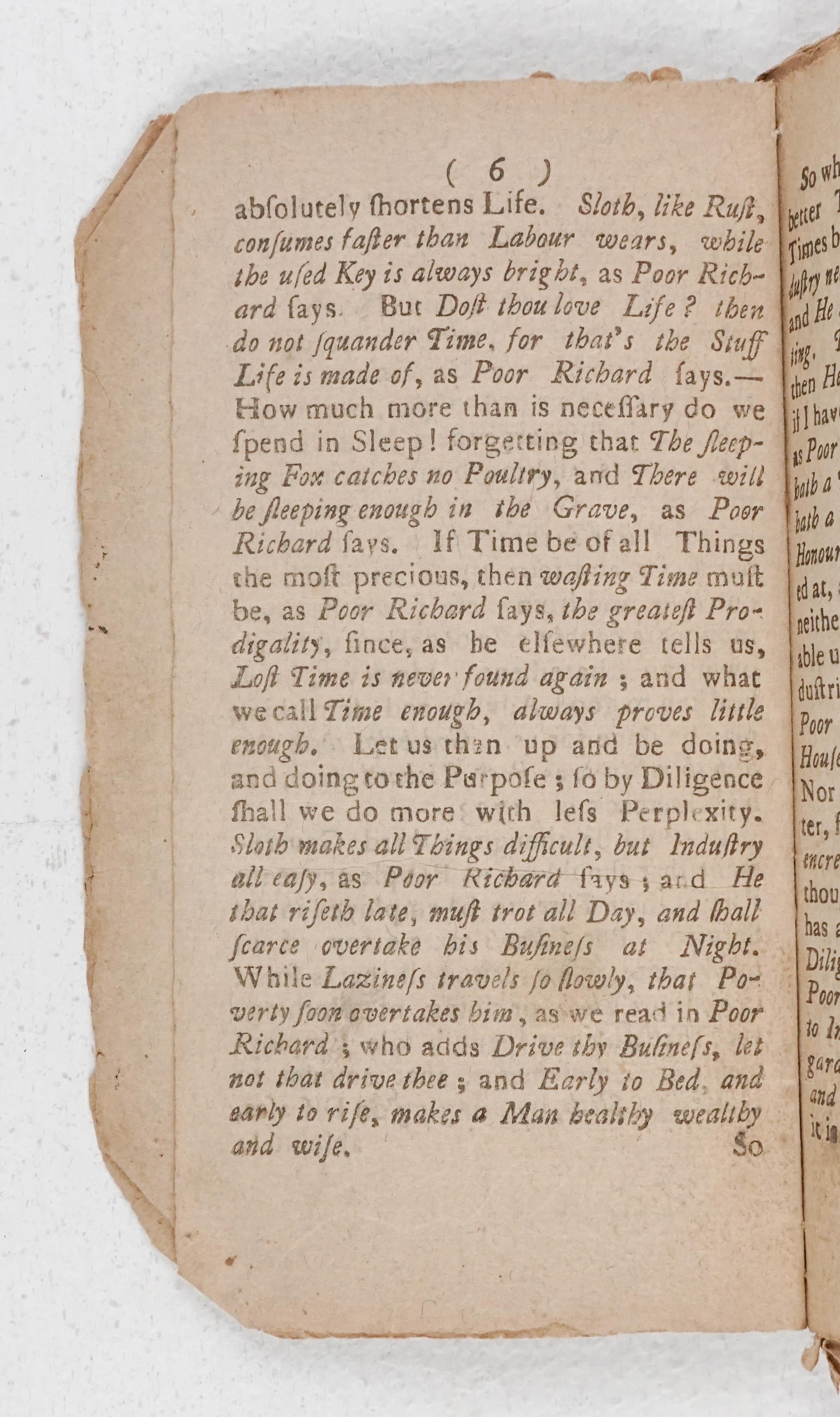 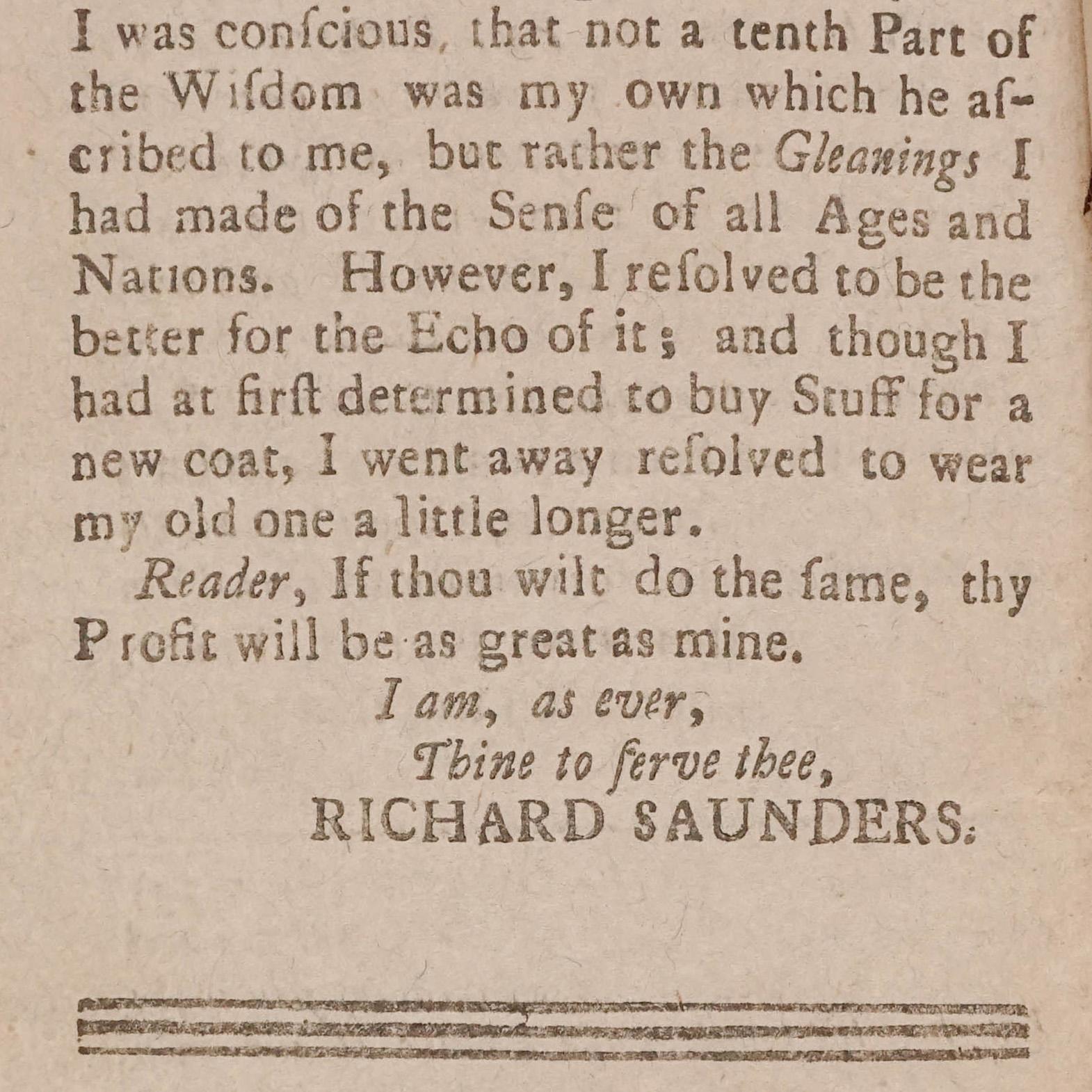 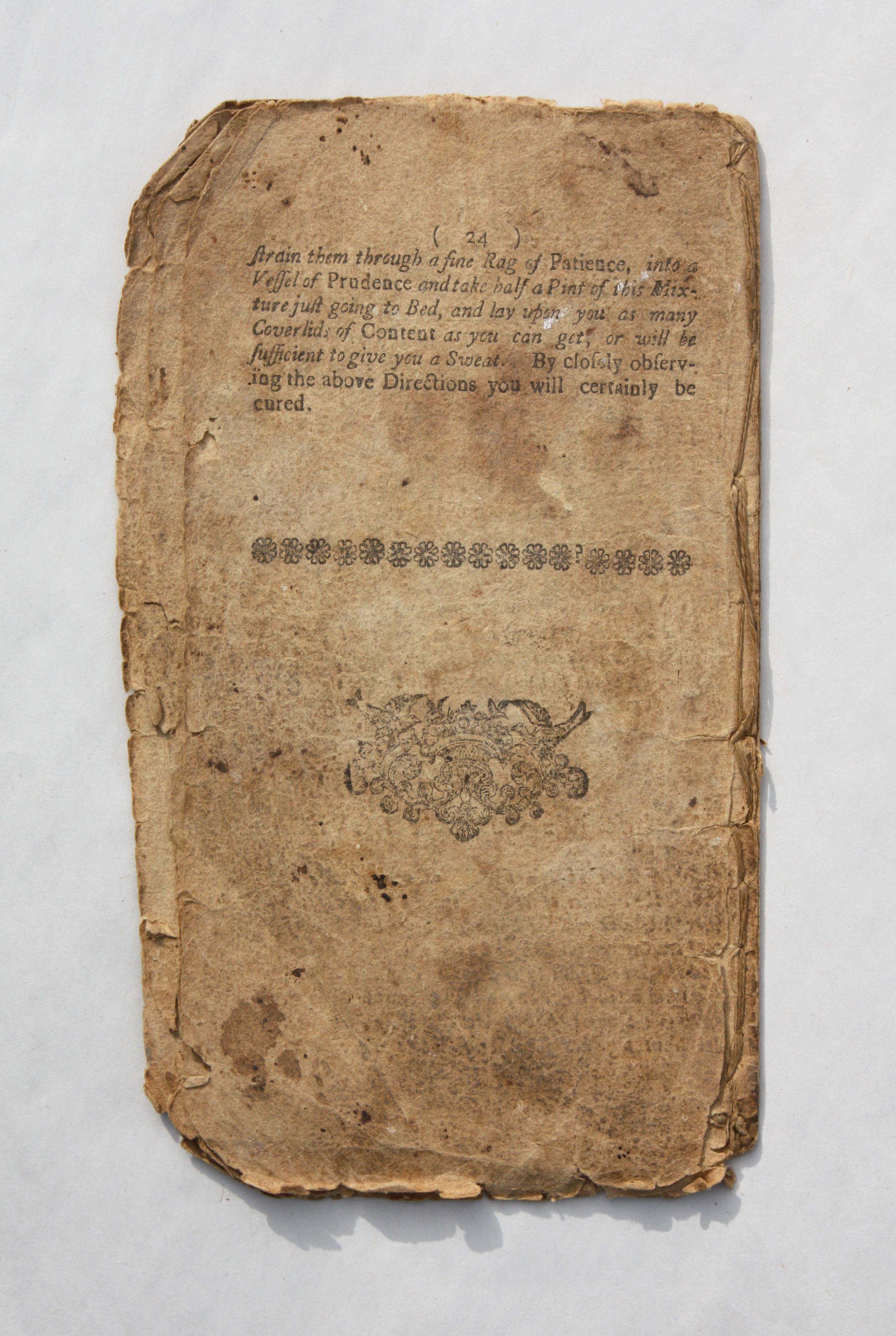 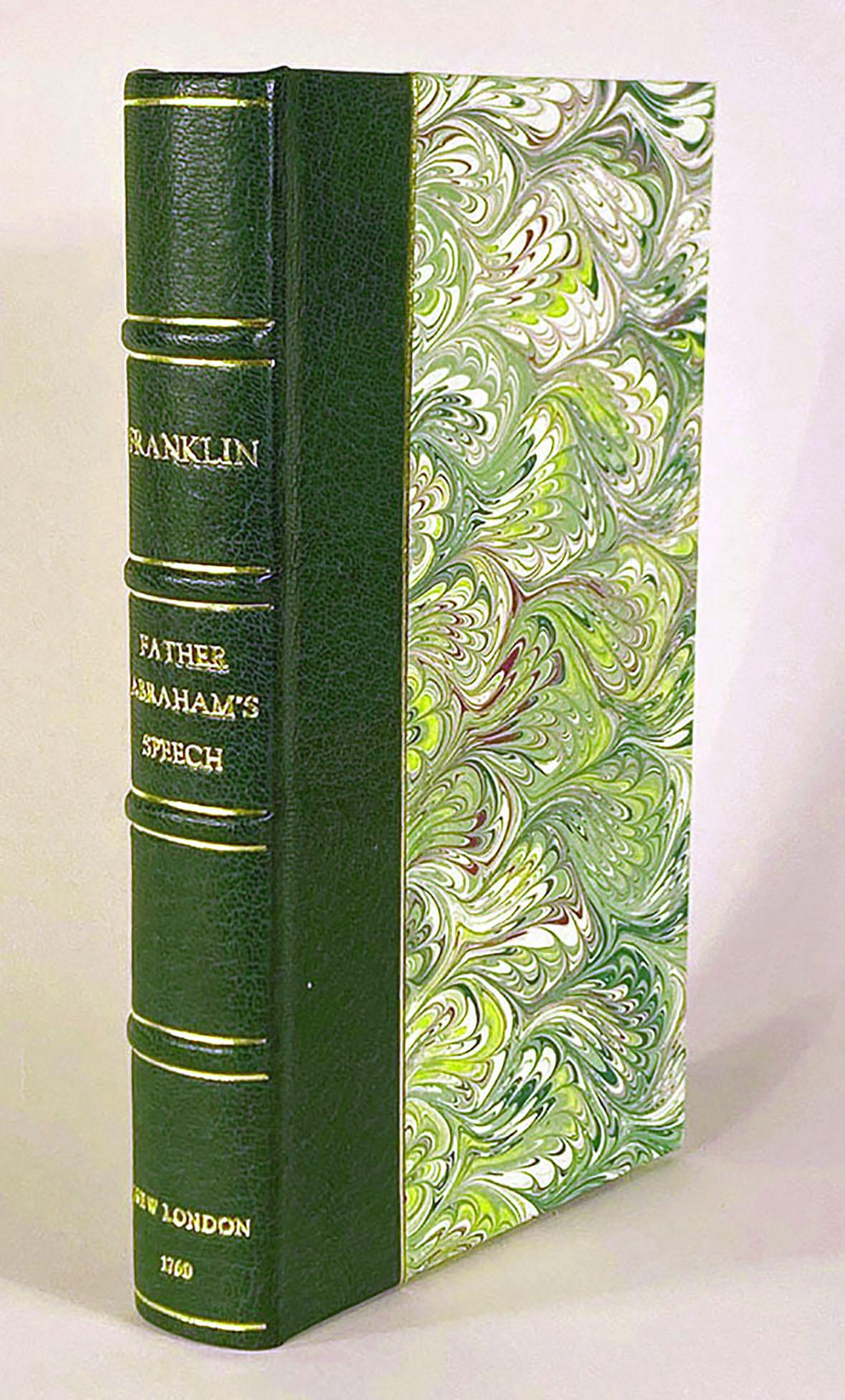 [Franklin, Benjamin]. Father Abraham's speech to a great number of people, at a vendue of merchant-goods; introduced to the public by Poor Richard, (a famous Pennsylvania conjurer and almanack-maker) in answer to the following questions, Pray Father Abraham, what think you of the times? Won't these heavy taxes quite ruin the country? How shall we be ever able to pay them? What would you advise us to? New-London [Conn.]: Printed and sold by T[imothy] Green, [1760?]. 24 p. ; 15 cm. Sewn sheets, uncut; occasional fraying at margins, some soiling, generally a sound copy. In a custom clamshell case. Shipton & Mooney 41123; Bristol B2128; Carpenter US1760.2. Not in Evans.

One of five known copies of the second separate printing, and the only separate edition printed before 1770 in private hands.

Better known by its later title, The Way to Wealth, Benjamin Franklin’s essay, according to Jill Lepore, “stands among the most famous pieces of American writing, ever,” and one of the most influential.[1] Published first as the preface to the 1758 edition of Poor Richard’s Almanac, the work represents the epitome of a practical philosophy that would profoundly shape the development of American economic enterprise.

The text, which draws liberally from Franklin’s earlier writings, takes the form of “a harangue” of an old man dispensing advice to an assembled multitude. The narrator speaks in pithy soundbites, offering proverbs that swiftly passed “from literature to into the general human speech,” as one biographer noted.[2] “Early to bed, and early to rise, makes a man healthy, wealthy and wise.” “There are no gains, without pains.” “One today is worth two tomorrows.” “Little strokes fell great oaks.” “He that goes a borrowing goes a sorrowing.” “God helps them that help themselves.”

But more important perhaps than the individual aphorisms is the overall thrust of this short work, which emphasized, as Franklin recalled in his autobiography, the role of “Industry and Frugality as the Means of acquiring Wealth, and thereby securing Virtue.” In his classic work on economic sociology, Max Weber found in Franklin’s writing the perfect embodiment of “the Spirit of Capitalism” and the origins of American economic life. More recently, Harvard Business School professor Sophus Reinert has demonstrated how foreign reprints of The Way to Wealth served to globalize a uniquely American approach to capitalism. Before the 1960s, Franklin’s text, Reinert notes, was “by far the single most widely printed economic work – that is, a work principally relating to economic practices or ideas – in world history.”[3] In this context, Franklin’s collection of proverbs – written with an aim toward changing the habits of the common people – proved to be more influential than the thick treatises of John Locke, Adam Smith, and David Ricardo. “In the realm of political economy, Franklin’s Way to Wealth was addressed not to the minds but to the hearts of men, and his aim was not simply to impact the world of ideas but to influence sentiments, habits, and ultimately culture itself.”[4]

The Way to Wealth would go viral in the late eighteenth century, but there were only a few separate editions published before 1770.[5] The importance of these editions cannot be understated. As originally published, the text was fragmented scattered throughout an annual almanac and ephemeris, chock-a-block with meteorological forecasts, astronomical predictions, astrological charts, calendars, chronologies, financial tables, information on courts, Quaker meetings, and highways, and useful recipes. Indeed, Franklin gave pride of place in his almanac not to the aphoristic treatise for which he would be revered, which was buried at the lower half of right-hand page, but to a didactic poem, “On Ambition,” printed in segments along the top of the left-hand pages. 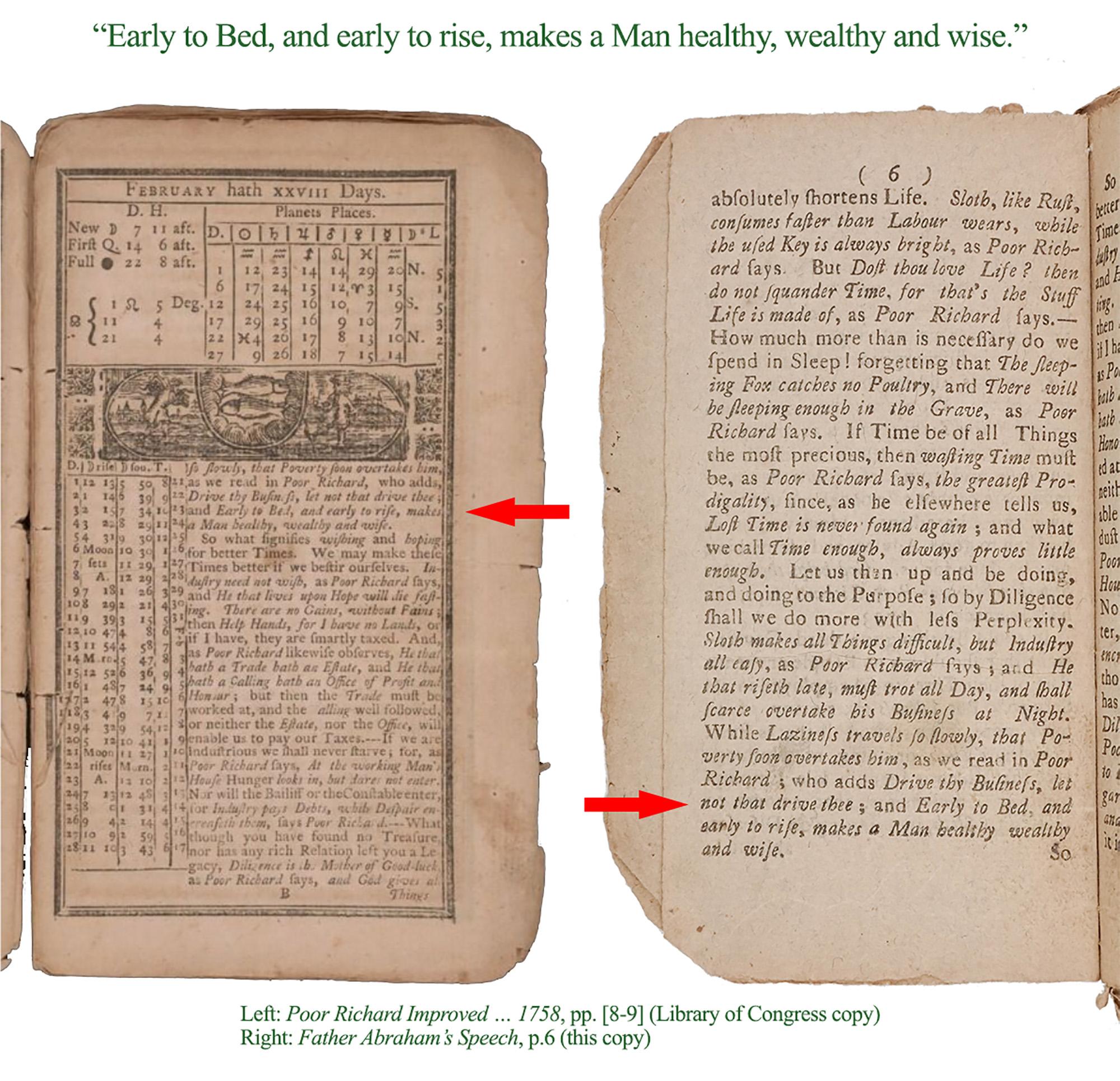 The colonial printers who published separate editions of The Way to Wealth elevated Franklin’s essay from its humble and ephemeral origins, and established it as a canonical text. Franklin’s almanacs, like all periodicals, were intended to function for only a limited period and then be discarded. Most of the content of the almanacs was soon forgotten and never reprinted. Without a separate edition that brought the text together and presented it without the distracting addenda, The Way to Wealth would also have been lost to the ages. At essence, a book is a concrete manifestation of contemporary opinion that certain writings that would otherwise be neglected must be preserved. The first editions of Franklin’s text initiated the process that would establish The Way to Wealth as an American classic.

According to Leonard W. Labaree, the editor of the Franklin papers, the present copy is the second separate printing of The Way to Wealth. The first was published by Franklin’s nephew Benjamin Mecom in Boston in March 1758 under the title Father Abraham's speech. Mecom appended seven “curious pieces of writing” by his uncle, bringing the pamphlet to 24 pages. As Labaree notes, “Timothy Green of New London, Conn., reprinted the speech from Mecom’s 1758 issue in an undated 24-page pamphlet, probably soon after it appeared in Boston.” Green’s edition includes two of the pieces Mecom appended in 1758. In 1760, Mecom published a third edition, this time without the additional works, as a 16-page pamphlet. Green’s nephews, Thomas and Samuel Green, would publish two additional editions of Father Abraham's speech on a press they acquired from Mecom in 1767. None of the title pages of these early printings bears a date, and even though Green’s edition was likely published in late 1758 or 1759, traditional bibliography dates it to 1760.

All of these earliest separate editions of The Way to Wealth are extraordinarily rare. Miller locates 20 copies of the 1758 edition of Poor Richard’s Almanac, and since the 1967 Streeter sale, six copies have sold at auction. In contrast, there are only four recorded copies of Green’s edition of Father Abraham’s Speech (held at the American Antiquarian Society [two copies], the Connecticut Historical Society, and Yale). The last time a copy was offered at auction was 1917. This edition is missing from most of the great collections of historical Americana -- no copies at the Library of Congress, Harvard, the Newberry Library, the John Carter Brown Library, the Huntington Library, or the Boston Athenaeum. This appears to be the only copy of Franklin's text printed before its popularization in the 1770s that is in private hands.

Since no early printings of The Way to Wealth have been offered in over 100 years, there are no direct price referents. In terms of Franklin rarities, the closest comparable we have found is the 1733 edition of Poor Richard’s Almanac, of which only three copies have been recorded. In 2009, a third printing was offered at Sotheby’s at an estimate of $100,000 to $150,000. It sold for $566,500. This is quite literally a once in a lifetime opportunity to acquire one of the earliest editions of the most important work in the intellectual history of American enterprise and global entrepreneurship.

[3] Sophus Reinert, “The Way to Wealth around the World: Benjamin Franklin and the Globalization of American Capitalism,” American Historical Review 120 (2015), pp. 66-67. 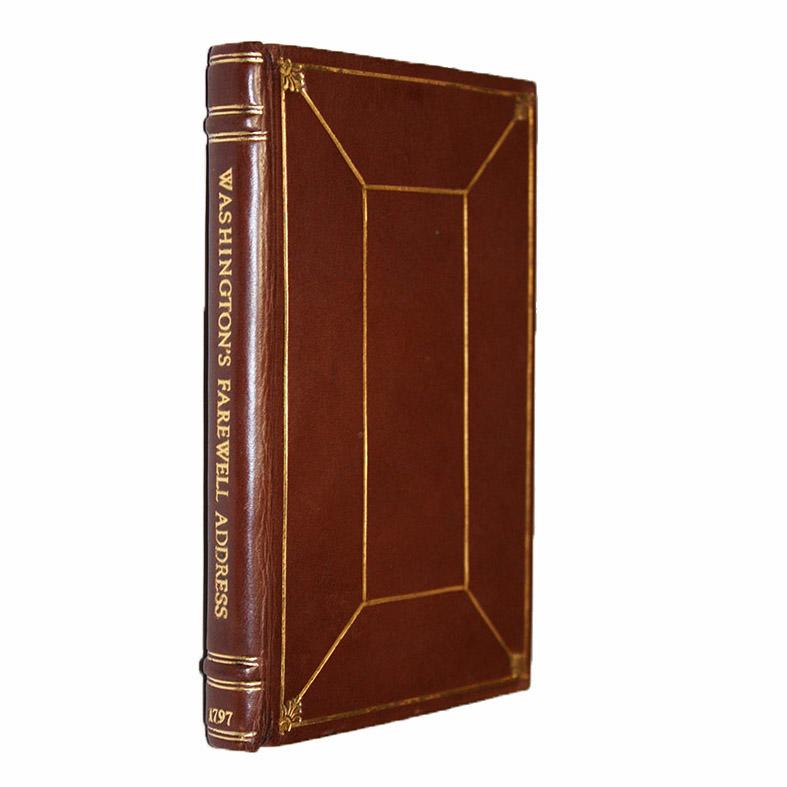 Washington, George.  America's lecacy [sic]: being the address of G. Washington, on his declining a re-election to the presidency, to the people of th... view details
$6,000
View details
add to wishlistADD TO YOUR BASKET 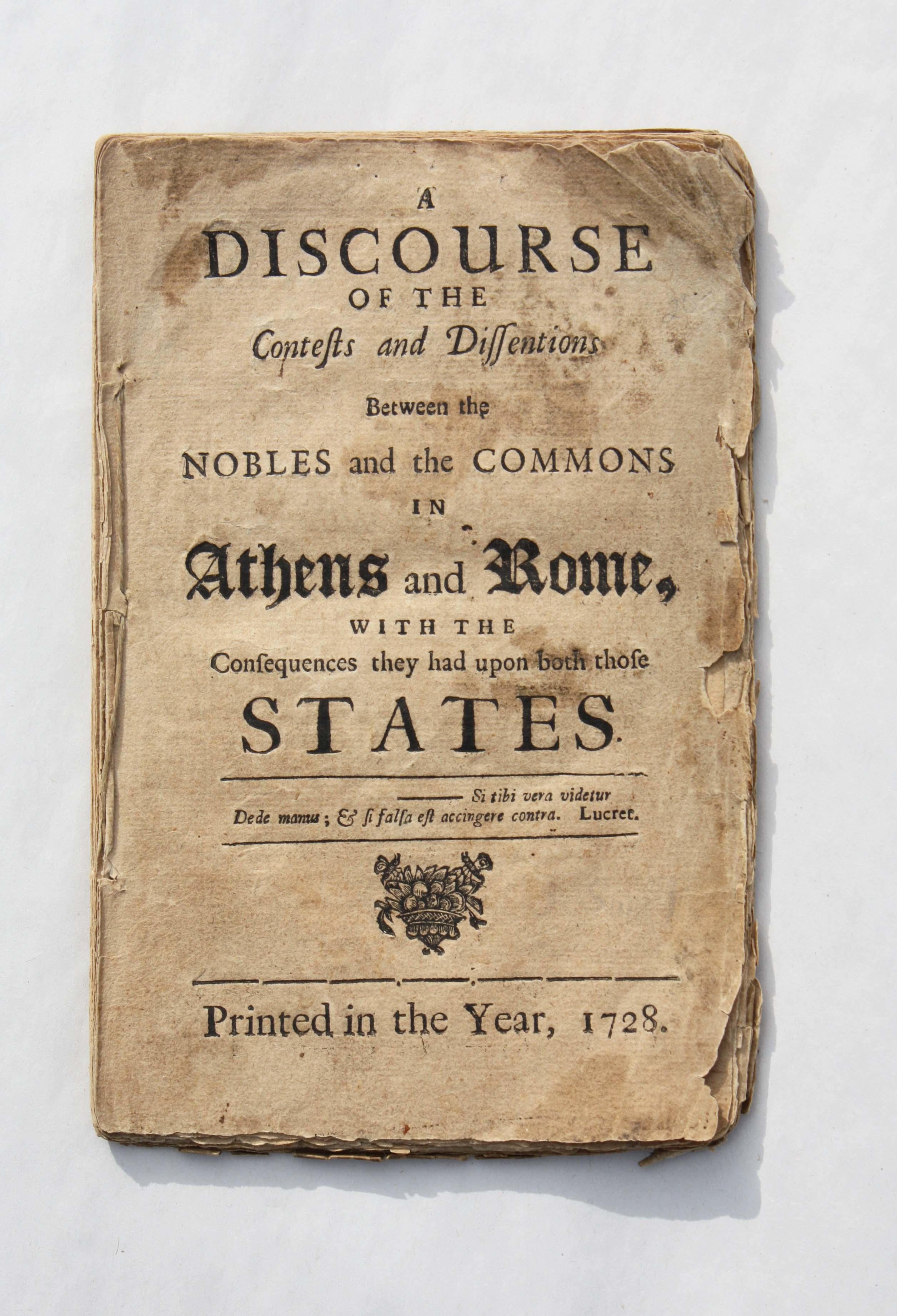 Swift, Jonathan (1667-1745). A discourse of the contests and dissentions between the nobles and the commons in Athens and Rome : with the consequences... view details
$25,000
View details
add to wishlistADD TO YOUR BASKET 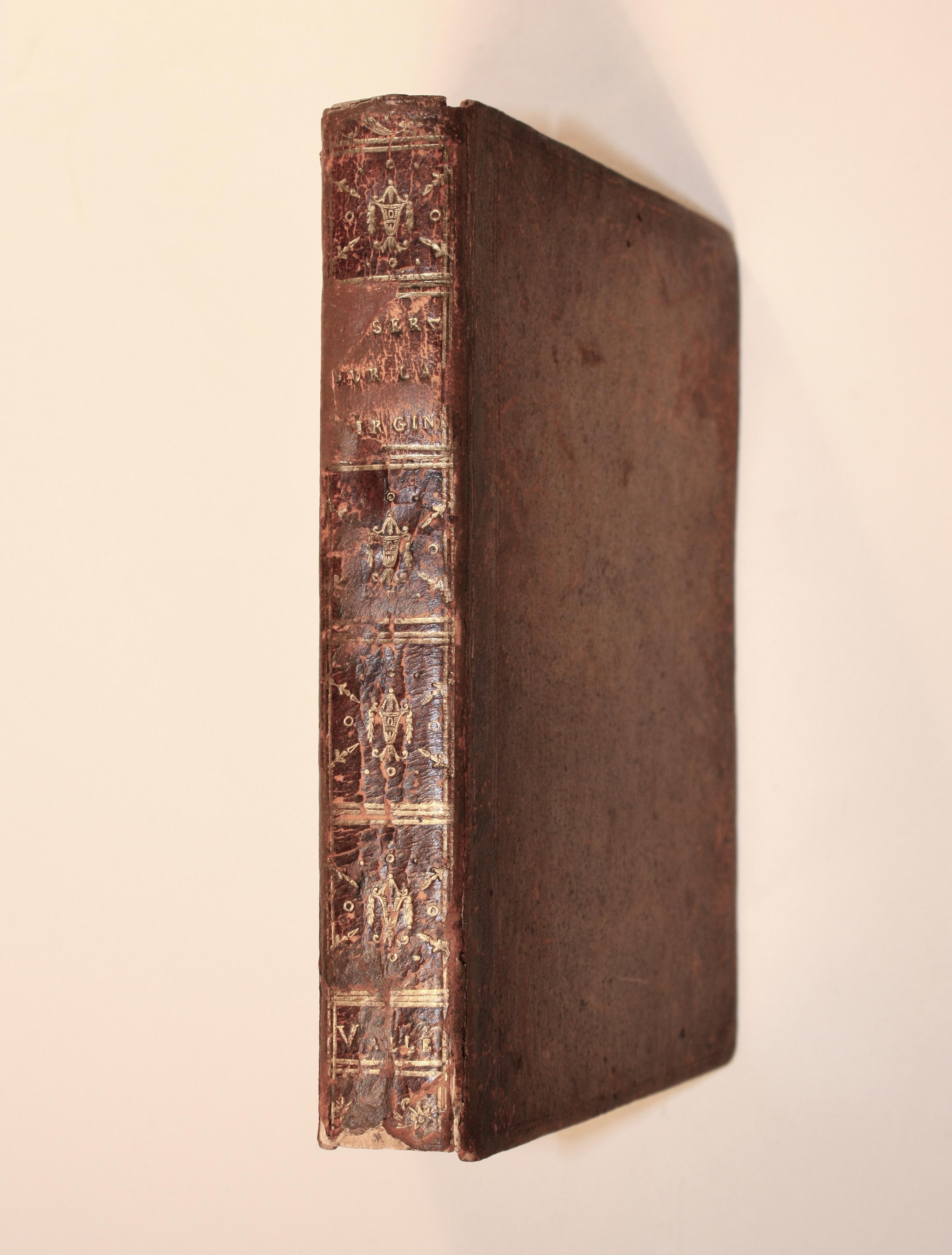 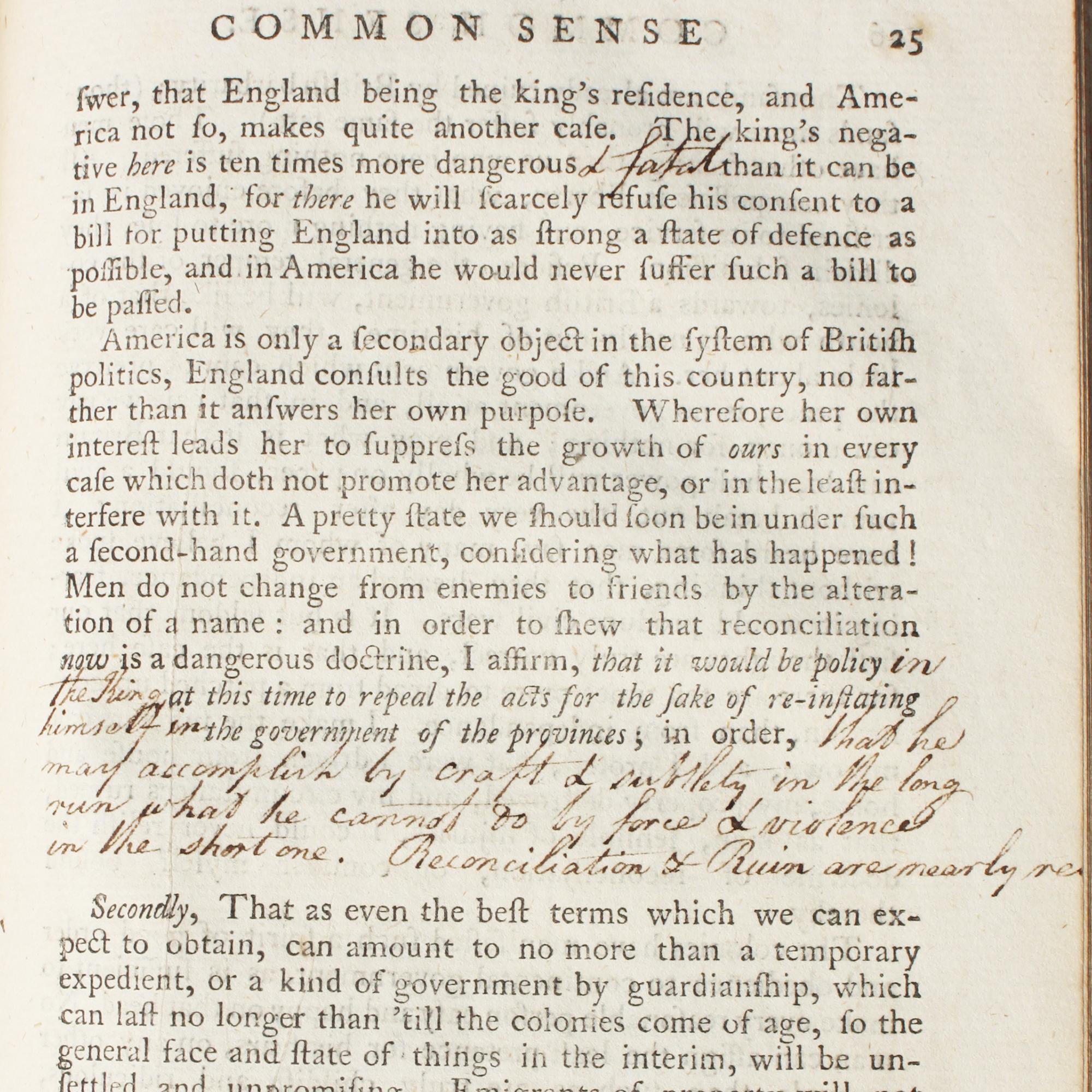 Paine, Thomas (1737-1809). Common Sense; Addressed to the Inhabitants of America… A New Edition, with several Additions in the Body of the Work. To wh... view details
$45,000
View details