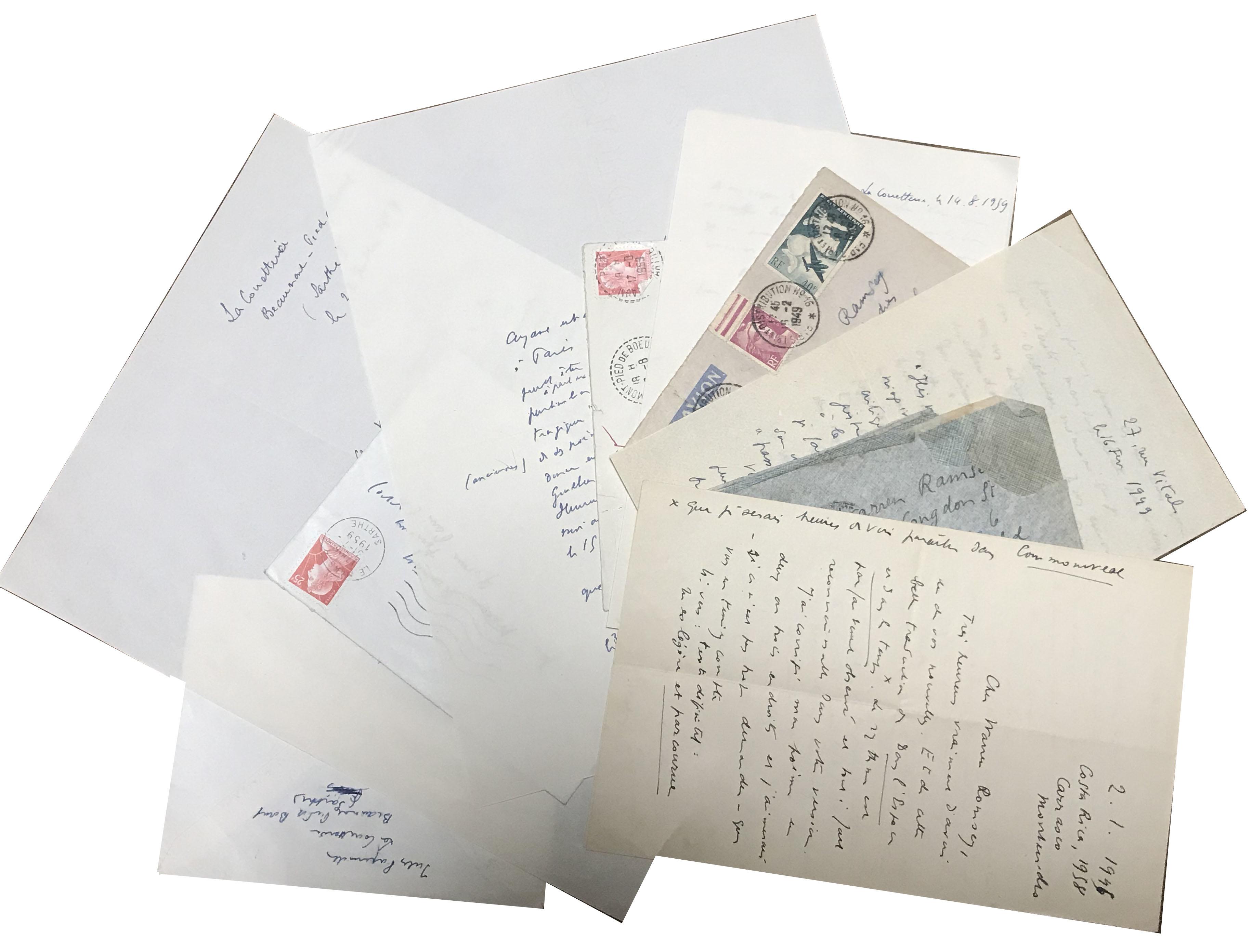 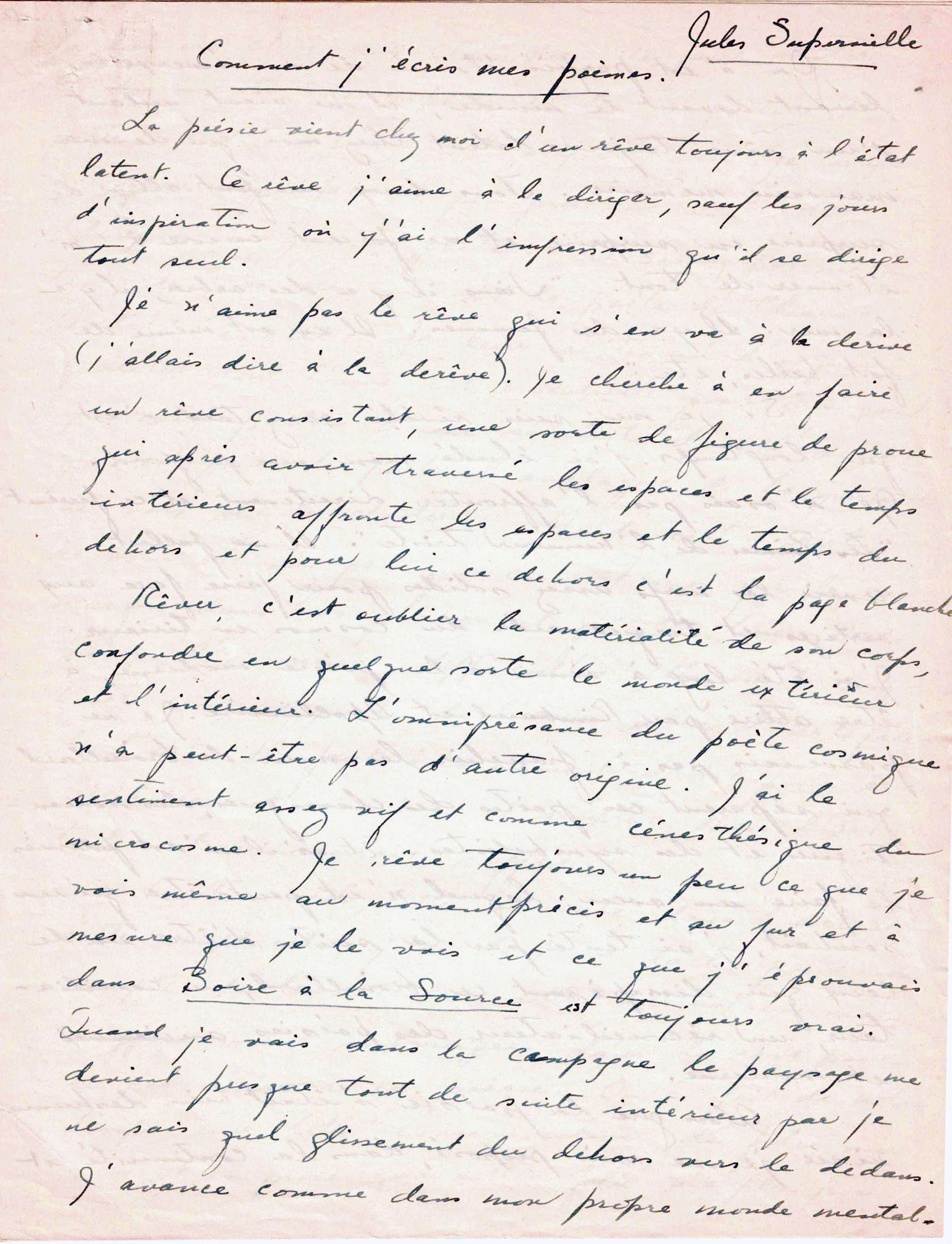 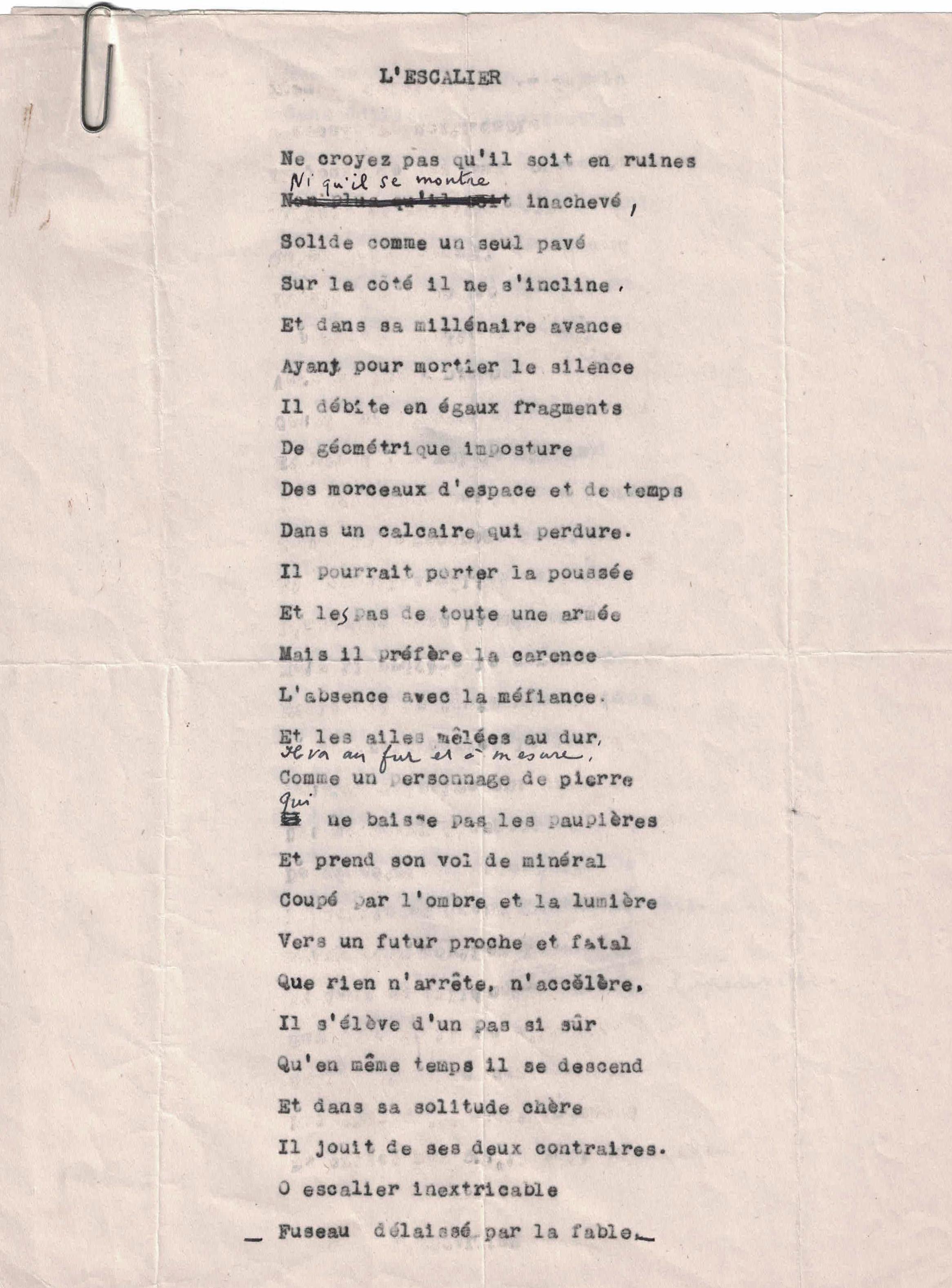 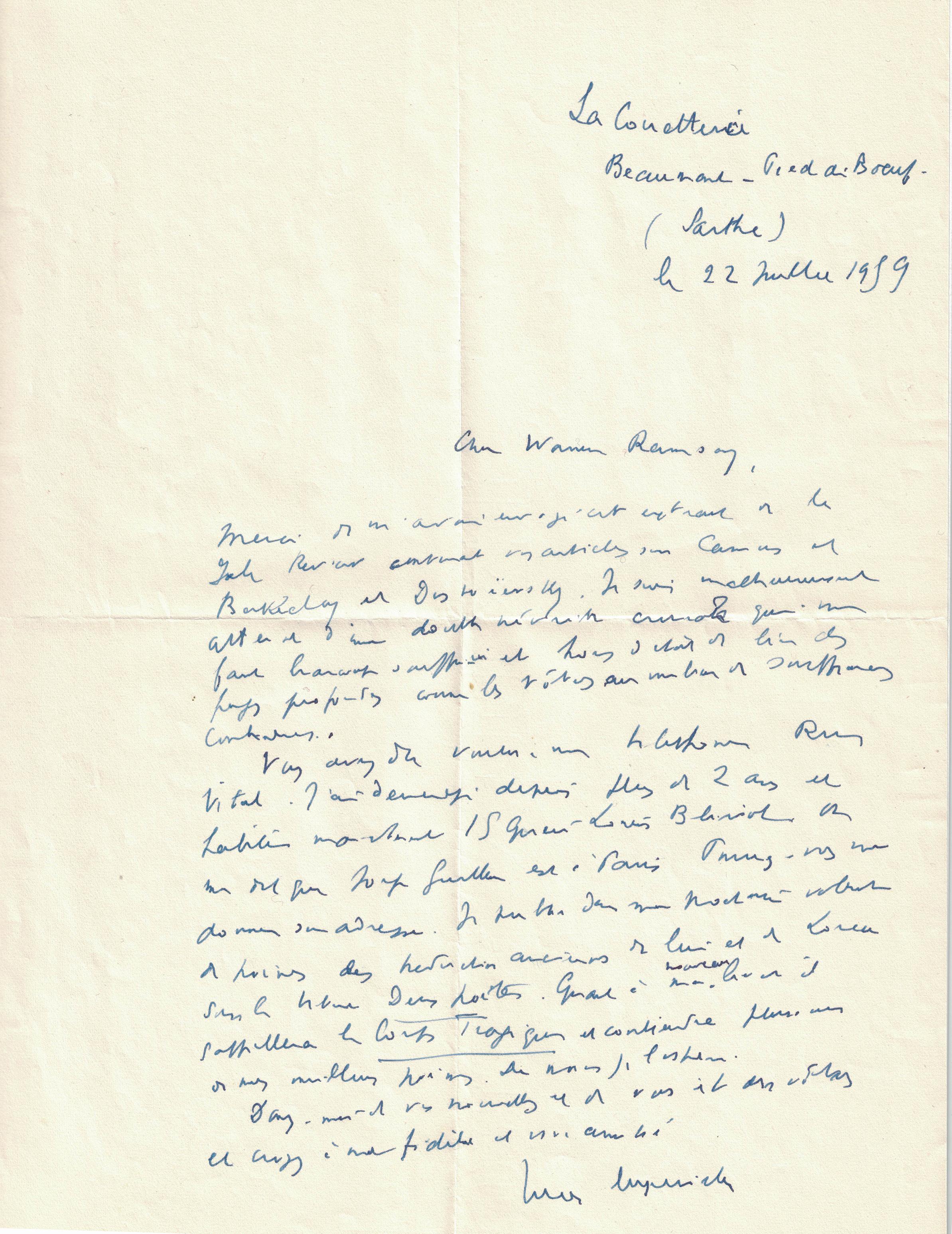 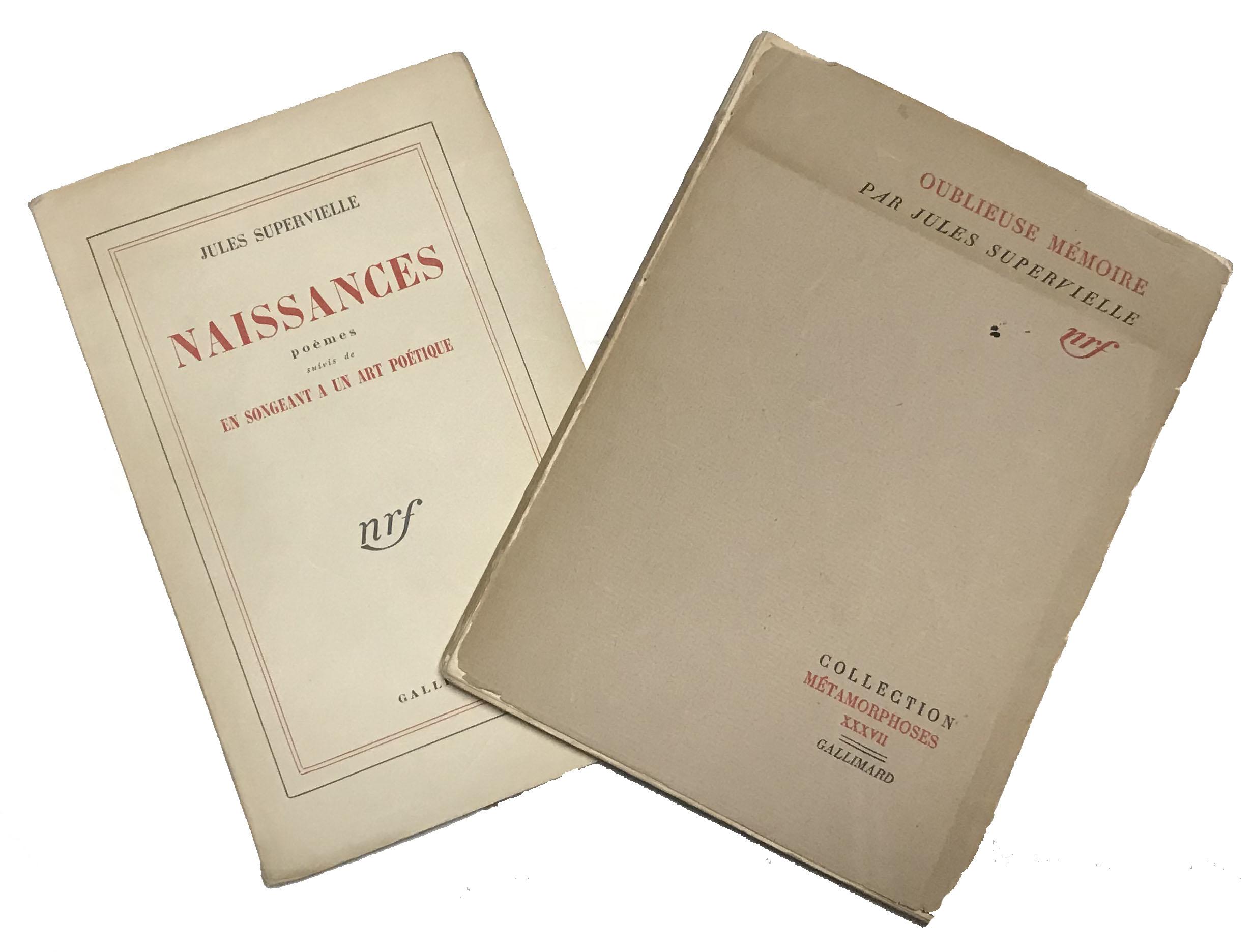 A small but rich archive of correspondence and manuscripts by the great French-Uruguayan poet, thrice nominated for the Nobel Prize.  Admired by Rilke (with whom he collaborated), Eliot, Michaux, and Paulhan, Supervielle cultivated a lyrical aesthetic, often centered on Latin American themes, that gave full rein to the promptings of the unconscious while avoiding the glib distortions of Surrealism.

These materials are from the files of Warren Ramsey (1914-1997), the American academic who introduced the poet to an anglophone audience.  Born in Spokane, Ramsey received his master’s degree at Brown University (1946) and his doctorate at Yale (1949).  He joined the French department at the University of California, Berkeley in 1950 and remained there until his retirement in 1972.  His major work, Jules Laforgue and the Ironic Inheritance (Oxford University Press, 1953) was awarded the Modern Language Association Prize.

It was while he was a student at Brown that Ramsey initiated a correspondence with Supervielle by sending him a translation of “Dans l'espace et dans le temps” that he hoped to publish in Commonweal, to which Ramsey was an occasional contributor.  In his letter of 2 January 1946, sent from Montevideo, the poet offering general praise for the translation “que je serais heureux de voir paraitre,” and offers a series of corrections to the French text.  Ramsey’s translation, “In Space and Time,” would not be published until 1948, when it appeared in Yale French Studies #2, a special issue devoted to modern poets, along with another translation by Ramsey, “Descent of Giants.”

For that issue, Supervielle also sent Ramsey the manuscript of “L’escalier,” published in the opening pages of the journal. This is the third of several poems of the same title (see the Pléiade edition, p. 496), and precedes its first book publication in Oublieuse Mémoire (1949). The manuscript is here, with several corrections in the poet’s hand, along with Ramsey’s transcription and notes for his commentary, as is a copy of Oublieuse Mémoire that Supervielle inscribed to Ramsey.

In his afterward to “L’escalier” in Yale French Studies, Ramsey wrote that “Supervielle’s peculiar quality is the fluidity of his imaginings, his way of dissolving one meaning into another.” The poet praised these lines in his letter of 16 February 49: “Voila d’excellents critiques et … parfaitement justes. … Vos traductions des mes poèmes m’ont plus beaucoup aussi.”

It was doubtless at this time that Supervielle sent Ramsey a manuscript draft of his vital personal manifesto, En songeant à un Art Poétique (Pléiade edition, 559-567), here titled “Comment j'écris mes poèmes.” Much reprinted, this influential essay offers an analysis of his aesthetic of the “univers interieur,” the world of dreams, vision, and obscurity that represents not a rejection of the perceptual world but rather a transcendent penetration into its deepest truths.

At 18 pages, this is the only surviving complete draft of Supervielle’s essay, and represents a major new discovery.  In his annotations to the Pléiade edition, Michel Collot reports that “quelques manuscrits fragmentaires, conservés par la famille” are the only drafts he has seen, and hypothesizes that these fragments were “regroupées par collage et montage” for the published essay (p. 988). The germ of the essay was published in NRF in 1933, and Supervielle published other brief excerpts in both French and Spanish between 1944 and 1950. This manuscript, which is much longer but bears the same title as “Cómo escribo mis poemas” (Sur 184, Feb 1950, pp. 7-9) is as close as we can get to his final version published in Naissances (1951).

The last three letters were written in the summer of 1959 when Supervielle was living in La Sarthe and Ramsey staying in Paris.  The poet discusses the poet Jorge Guillén, who translated his work into Spanish, Ramsey’s upcoming trip to Russia, and his forthcoming (and final) book Le corps tragique, which contains “plusieurs de mes meilleurs poèmes.”

Accompanying these manuscripts are some additional materials from Ramsey’s files, including a letter from Enrique Anderson-Imbert, typescripts of three poems by Supervielle, and Ramsey’s holograph transcript of a conversation on Supervielle with Jorge Guillén conducted on 17 December 1965.

A very important gathering for students of this great poet who has yet to be widely appreciated in the anglophone world.